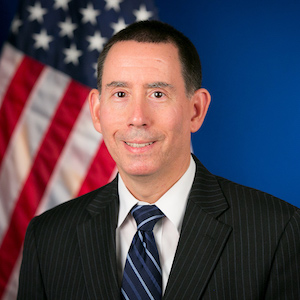 Robert Bahr is a Deputy Commissioner for Patents.  Mr. Bahr serves as an authority on patent laws, rules, and examining practice and procedure, and provides administrative oversight and direction for the activities of the Office of Petitions, Office of Patent Legal Administration, Office of Patent Quality Assurance, Central Reexamination Unit, and Manual of Patent Examining Procedure staff.
Mr. Bahr served as the Deputy Commissioner for Patent Examination Policy since March of 2015.  Prior to 2015, Mr. Bahr was the Senior Patent Counsel to the Deputy Commissioner for Patent Examination Policy, where he has been involved in numerous patents-related rule making since 1995, notably the changes to implement the Leahy-Smith America Invents Act and the American Inventors Protection Act of 1999.  Mr. Bahr began his career at the USPTO in 1984 as a patent examiner, and became a legal advisor in the Office of Patent Legal Administration in 1994.  Mr. Bahr has been awarded two Department of Commerce Gold Medals and two Department of Commerce Bronze Medals.

Mr. Bahr has a Bachelor of Science degree from the University of Maryland, and a Juris Doctor from George Washington University.

Past Events with Robert Bahr

IPW Webinar: A Conversation with the Commissioner of the USPTO: A Look Inside Patent Processes at the USPTO (Free CLE Webinar)