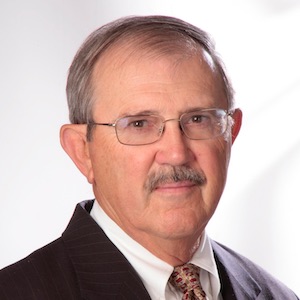 Joseph Root has served as both IP and General Counsel, in-house and out, for corporations and law firms, in a career spanning three decades. In 2008 he founded QualiPat, a company performing IP services and training. There, he built, trained, and managed an IP team in India that performed patent drafting and analytics, including preparing and filing over 300 US patent applications. He is also the author of Rules of Patent Drafting: Guidelines from Federal Circuit Case Law.

Over the course of his career, Joe has assumed both management and hands-on responsibilities for the identification, protection, and enforcement of both patents and trademarks. His expertise was recently recognized by London-based Intellectual Asset Management magazine, which named him to the “IAM Strategy 250 – The World’s Leading IP Strategists.” Joe received his JD (magna cum laude) at Wake Forest University School of Law, and a BS in engineering from the United States Military Academy at West Point. Prior to law school, he worked as an engineer, production supervisor, and soldier, including a tour commanding an infantry company in Vietnam. He is now a country patent lawyer in the hills of North Carolina, with his wife Natalie and bearded collie Claymore.

Joe can be reached at [email protected].

Two seminal cases illustrate the techniques of analyzing definiteness in a post-Nautilus world. One case followed Nautilus and the other preceded it, but that case demonstrates what stands of the old rationale. The first decision, Ethicon Endo-Surgery, Inc. v. Covidien, Inc., dealt with ultrasonicshears for cutting and sealing a blood vessel… A clear difference between the new “reasonable clarity” standard and the Federal Circuit’s “insolubly ambiguous” formulation is that the latter calls for considerable effort in seeking out a claim construction that comports with the inventor’s manifest intent. The new standard may require the same effort, but that result does not appear guaranteed by the language itself. The entire direction of patent law toward Disclosure World suggests that definiteness will continue to be governed in large part by the meaning drawn from the patent as a whole, not the claim language standing alone.

The Disclosure Revolution – A Report from the Front, 2014

The Disclosure Revolution is an ongoing process that has transformed patent law over the last couple of decades. While courts continue to say, “The claims define the invention,” decision after decision rewrites broad claim terms to conform to the scope of disclosure. A single embodiment once served as an example supporting enabled claims bounded only by the prior art; now, a single embodiment signals the inventor’s intend to limit the invention to the embodiment itself, rather than to claim terms… Overall, 2014 will likely be remembered primarily for Alice and its eventual progeny. In addition to its impact on the law per se, the economic effects may prove enormous. An entire segment of the patent community stands vulnerable to a slowdown, or shutdown, of patenting activity in the business methods and software fields. Other areas, including definiteness, will feel the effects of 2014, but in a far more incremental fashion.

Drafters need to think both outside and inside the claims. Outside thinking aims to make the court’s task easier by providing claim terms amenable to straightforward, simple claim construction. Preferably, at least, the key terms are expressly defined, or at least explained through demonstration. Inside thinking takes up the question whether the claim construction supports the patentee’s or owner’s intention, as manifested in the claims and specification. By the time a drafter is “experienced,” she has been exposed to considerable instruction on claim drafting. Claim construction rules, claim drafting principles, claim drafting strategy—the endless seminar. Yet, the Federal Circuit regularly lectures the patent bar on its drafting practices. The difficulty is that among all of our construction rules and strategic principles, we have lost sight of clarity and precision. We need to refocus on basic principles. Indeed, we’re going to need a bigger boat.

No question exists that patent eligibility under Section 101 has been, and remains, the most active question in patent law. Watching the rapid flow of cases back and forth between the Federal Circuit and the Supreme Court exceeds the excitement generated by most TV shows in sheer entertainment value. The only question open for discussion is whether we are watching “Game of Thrones,” “Survivor”, or “Modern Family.” Actually, the best choice may be “Lost”.

‘Broad’ in this context means ‘broadest supportable’ coverage, limited only by the technology in terms of supportability and by the prior art in terms of outer reach. A failure to achieve such breadth is generally attributable to overclaiming, where one runs afoul of the prior art; underclaiming, where the drafter stop short of claiming all he could; or faulty claiming, where the drafter attempts to achieve breadth, but support issues or drafting errors restrict claim scope. Sound principles, instilled by effective training, cannot substitute for adequate knowledge of the prior art. They can provide the knowledge and thus the confidence to claim out to the limits defined by that art.

To bring this principle to bear on the problem of claim breadth, consider a patent disclosing only a single embodiment, with a main claim whose scope extends beyond that of the embodiment (yet inside the ambit of any cited prior art). As discussed at length elsewhere, without diverse claims, courts are likely to determine that the embodiment does not simply illustrate the invention; it is the invention. The court then follows promptly by reading limitations of the embodiment into the claims.

Patent prosecutors have responded to the Disclosure Revolution in much the same way that clergy and medical doctors responded to the Black Death. Medieval doctors offered incantations and ritual; patent lawyers recite boilerplate. Neither is particularly effective.

Patent Drafting: Include Alternatives and Variations to Claim Limitations

Recent Federal Circuit reasoning should make a patent drafter decidedly averse to single-embodiment patent applications, with good reason. Unfortunately, real-world constraints, principally centering on budget and time issues, have resulted and probably will continue to result in the production of a large number of applications in which multiple embodiments either do not exist or do not justify the time and effort to include them in a patent application… In most instances, the addition of a few sentences would have completely cured the cited problems.

Past Events with Joseph Root