“In order to obtain federal registration of their marks, cannabis-related businesses should not suggest the goods or services the mark is associated with are illegal under the Controlled Substances Act, including in the required proof of use submitted to the USPTO.” 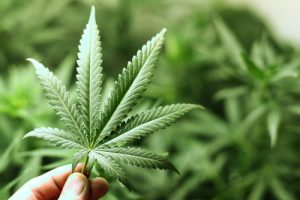 In most industries, federal trademark registration is seen as an attractive form of protection, because federal registration converts what would normally be localized common law trademark rights into national rights covering all 50 states. In addition, a federal registration can be used as the basis to easily (and comparatively inexpensively) register your trademark worldwide. The application process involves either registering a mark based upon preexisting use, or alternatively, on an intent-to-use basis, which acts like a place holder reservation of the mark for up to three years or more with maintenance fees. Application fees are charged per mark and per class—each category of goods or services (there are 34 different classes of goods, and 11 different classes of services) the mark is used in association with for which protection is sought.

In order to register, a description of the goods or services sold or offered (or intended to be sold or offered) under each class must be made, and acceptable proof of use (typically photos or screenshots of the mark as used in commerce) must be provided for each class of goods or services applied for. The most common cannabis-related products would normally belong in Classes: 5 for “dietary supplements” and “food and substances adapted for medical use,” including “cigarettes without tobacco, for medical purposes”; 31 for “natural plants and flowers” and “agricultural [and] horticultural products not included in other classes”; and 34 for “tobacco substitutes (not for medical purposes)” and “smokers’ articles.”

Describing Cannabis Marks at the USPTO

However, businesses in which the products or services involve the manufacture, distribution or consumption of cannabis—aka “plant-touching” businesses—face an uphill battle seeking to build and protect their brands. This is because all “plant-touching” products and services are still considered illegal at the federal level under the Controlled Substances Act (CSA), which prohibits, among other things, manufacturing, distributing, dispensing or possessing certain controlled substances, including cannabis and cannabis-based preparations, and makes it unlawful to sell drug paraphernalia. Accordingly, the USPTO’s current policy is to refuse all trademark applications for cannabis-based goods and services as illegal under the CSA.

Therefore, in order to obtain federal registration of their marks, cannabis-related businesses should not suggest the goods or services the mark is associated with are illegal under the CSA, including in the required proof of use submitted to the U.S. Patent and Trademark Office (USPTO). Regardless, an applicant may still face an independent investigation of the mark by the USPTO examining attorney processing the application, including a sworn statement indicating whether all the services identified in the application will comply with relevant federal law, including the Controlled Substances Act, and whether the identified goods include marijuana, marijuana-based preparations, marijuana extracts or derivatives, or paraphernalia or equipment designed for use in smoking, vaping, inhaling, ingesting or consuming marijuana, including synthetic marijuana. The same considerations apply for intent-to-use marks, which are routinely rejected if they indicate illegality under the CSA, such as inclusion of a cannabis leaf in a logo, or the word “weed” in a mark. A novel option currently available is to file an intent-to-use application specifying that the goods and services intended are lawful under the CSA, in the hope that cannabis-related products become lawful under the CSA before the intent-to-use application expires. If successfully accomplished, this type of bet on legalization could result in an indefinite reservation of federal trademark rights.

A commonly suggested approach for cannabis businesses is to obtain federal trademark registrations in relation to any lawful goods and services they provide now, including hemp and cannabidiol (CBD) products, as these registrations may later encompass use in conjunction with cannabis products if and when cannabis is federally legalized. It should be noted, however, that the USPTO’s current position appears to be that an application and specimen showing the mark used only in association with legal goods or services may still be subject to invalidity if the applicant is also using the same mark in association with described goods or services that are illegal under the CSA. The USPTO has also repeatedly rejected arguments based on the legality of cannabis under the state law of the applicant.

In addition, if the company name is the same as a trademark, states such as California may allow filing for incorporation or a fictitious business name to create a presumption of an exclusive right to use that name.

In sum, cannabis-based businesses should consider selling their goods and offering their services under their chosen trademarks as broadly and as early as possible to establish common law rights, as well as seeking federal registration for any trademark uses that are legal under the CSA, and seeking state registrations in all other states where trademark use occurs.

James Monagle is Of Counsel at Wilson Elser Moskowitz Edelman & Dicker LLP, where he maintains a comprehensive practice in intellectual property and technology law, handling litigation in state and federal courts. [...see more]