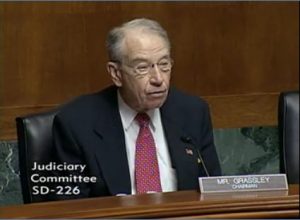 On the morning of Tuesday, April 25th, the full Senate Judiciary Committee convened a hearing entitled Intellectual Property – Driver of Innovation: Making Our Lives Healthier, Safer, and more Productive. Taking place one day prior to World Intellectual Property Day, the day’s meeting focused on how intellectual property enables innovators to make meaningful impacts in the lives of consumers and the challenges of enforcing intellectual property rights. Echoes of the patent troll debate were also sounded to the likely consternation of U.S. patent owners across the globe.

“As a society, we depend on innovators… to make our lives better and to solve the challenges we face,” said Sen. Chuck Grassley (R-IA), chairman of the House judiciary committee. Grassley cited statistics published by the U.S. Chamber of Commerce’s Global Intellectual Property Center (GIPC) on the 40 million American employed by IP-intensive industries. These same industries contribute $5.8 trillion to the nation’s gross domestic product (GDP) and account for 74 percent of U.S. exports, according to the Global IP Center. In his opening statements, Sen. Chris Coons (D-DE) cited separate statistics from the U.S. Department of Commerce which reported $6.6 trillion in value added to national GDP from IP-intensive industries.

Despite these benefits, both Senators also spoke to problems currently facing the U.S. system of intellectual property. Coons cited the February 2017 Global IP Index published by the GIPC which reported that the U.S., despite placing first in trademark and copyright protection, was only 10th overall for its sytem of patent protections, tied with Hungary. The number of new businesses created during 2014 was at a 40-year low, another point cited by Coons as proof that the U.S. was losing its competitive edge in IP protections. Along with a weaker IP system, another concern as always is counterfeiting, which can create health and safety concerns as well as drain $4.2 trillion from the global economy by 2022. Grassley also spoke about his efforts to enable the transfer of acceleration certificates awarded under the Patents for Humanity program by reintroducing the Patents for Humanity Program Improvement Act, a bill co-sponsored by Sen. Patrick Leahy (D-VT).

The first panelist to offer remarks was Matthew Allen, acting assistant director for the Intellectual Property Rights (IPR) Center with U.S. Immigration and Customs Enforcement (ICE). “The illegal distribution and sale of counterfeits pose a threat to health and safety,” Allen said. “Counterfeiters only care about their product looking good enough to be purchased, they only care about their bottom line.” Allen spoke to two agency initiatives being pursued by the IPR Center. One of these is Operation Engine Newity which investigates claims of counterfeit goods in the automotive, aerospace, rail and heavy industry sectors, many of which pose significant safety concerns. Another is Operation Joint Venture, an effort towards more public-private partnerships to enforce intellectual property rights and educate consumers on the impacts of counterfeits. 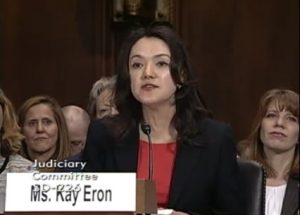 Kay Eron, GM of health and life science at Intel

Next to speak was Key Eron, general manager of health & life sciences at Intel Corporation (NASDAQ:INTC). Eron noted the more than $12 billion Intel invested in research and development during 2016 in support of Intel’s commitment to IP. “We see first-hand the amazing power of high-tech innovation to improve the healthcare of all Americans,” Eron said. She spoke about computational tools applied by Intel with health industry partners which reduce the time needed for genomic sequencing from a week to a matter of hours and improve real-time data analysis during clinical drug trials. Eron spoke of Intel’s commitment to strong IP rights even as she referenced 2014 statistics pushed by Mark Lemley and others on the 42 percent of patents declared invalid when validity was challenged in the federal court system. “Long gone are the technologies which work as standalone products,” Eron said. “If one part of the chain breaks down because of a weak patent, the entire system can be brought to a standstill.”

More reasonable views on the strength of IP rights were next proffered by Dr. Ashifi Gogo, CEO of Sproxil, a company offering an short message service (SMS) and data application platform for consumers designed to give them the capability to check whether an item is a counterfeit. Gogo noted that counterfeit products have been an issue going all the way back to the 2nd century BC with a documented case of one Gallic winemaker who attempted to copy the trade dress of a well-known Italian wine. Securing supply chains and educating consumers through tools like Sproxil could help to make IP theft unprofitable, Gogo testified.

The voice of the manufacturing sector was brought forth that day by Dr. Conor Madigan, co-founder and president of organic light emitting diode (OLED) component manufacturer Kateeva. “We’re proof that high-tech domestic manufacturing is not only possible but can be competitively advantageous,” Madigan said, further acknowledging that IP has been instrumental to driving innovation at Kateeva. “It’s only with a huge investment in time and money that we can build a product with this kind of global impact.”

Bioscience and related industries always have a large stake in patent discussions and the day’s hearing also included testimony from Dr. Neal Gutterson, VP of R&D at hybrid seed developer DuPont Pioneer. He noted that DuPont Pioneer invests $90 million each year on developing new corn seeds which exhibit improved yield and grain quality. “Fortunately, the United States allows patents on seed developments,” Gutterson said. He added that strong intellectual property rights were vital to initiatives like plant breeding and data-driven analytics for improved agricultural yield. “Sustainability will improve as a direct result of our investments in digital agriculture,” Gutterson said. One major challenge faced by the industry was the lack of a global standard leading to diverse national standards on data collection practices.

In questioning, Sen. Amy Klobuchar (D-MN) decided to advance the patent troll narrative and found a perfect sounding box in Eron to do so. “Patent trolls can use weak patents to extract monies,” Klobuchar said. Eron assented, noting that, while she was not an expert in IP laws, her understanding was that low-quality patents hurt Intel’s resources, diverting them from innovative R&D and towards litigation defense. “We do have a problem with patent trolls,” Sen. Thom Tillis (R-NC) would later add. “I don’t buy this idea that big guys are trying to squeeze out the small guys, a lot of times they’re looking for those smaller guys to scale up,” Tillis said, noting that app stores are filled with services being brought to the market on platforms provided by larger developers like Google and Apple. 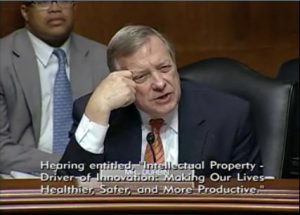 Some sobering thoughts on the patent troll issue were offered by Sen. Dick Durbin (D-IL), who said that the phrase has changed the whole debate on patent protection. “Whoever came up with that phrase should get a special bonus,” Durbin said, “because they manage to mischaracterize anyone who goes to court to assert patent rights as a troll… What I came to understand was one man’s patent troll was another man’s assertion of a patent right which they fought for and worked for for years which is now being infringed upon by some giant.” He asked the panel to quantify the amount of actual trolling going on compared to the legitimate assertion of patent rights. After a long beat where no one spoke, Durbin asked the panel, “Won’t touch it, huh?” The one panelist who did finally answer the question was Madigan, who said it was “important to strike the right balance” in curbing abusive litigation without making it too difficult for smaller players to settle disputes with larger companies.

Another major issue discussed at the hearing was the growing challenge of combating counterfeits in the age of e-commerce. According to Allen, counterfeits are increasingly being sent into the United States from foreign culprits through express shipping or mail sent through a foreign post office. Counterfeit goods still enter the country through containers shipped overseas, but the avenues for counterfeits have increased in the digital age. “Counterfeiting is a trade that depends on profits,” Gogo would later say. He reiterated his stance that educating consumers about the negative impacts of counterfeits would go a long way in preventing counterfeiters from successfully selling their ripoffs. Given that a great many American consumers knowingly purchase counterfeit NHL jerseys, Gogo’s stance could be viewed as overly hopeful.

The day’s most interesting question came courtesy of Sen. John Kennedy (R-LA). “If each of you [on the panel] were king or queen for a day, how would you change IP laws in America?” he asked. Allen and Gogo both said that they would focus less on changing the laws as they currently were and more on educating the consumer base about counterfeits. “We believe that strong patents benefit scientific progress while weak ones hinder progress,” Eron said. She was also puzzled by the high percentage of patent cases filed at the Eastern District of Texas, stating that it was her understanding that 40 percent of patent cases are filed in that district court. “It doesn’t make sense from a business standpoint,” Eron said. “I find to be strange that many of the patent cases are filed in that court.” Madigan said that he would like to see efforts to standardize IP laws and institutions globally, noting that it was most likely that his company would face infringement issues coming from Asian markets. “Every innovation is critical to the future,” Gutterson said in his answer to Kennedy’s question. “Both IP and regulatory consistency are important to bring products to market in a timely fashion.”