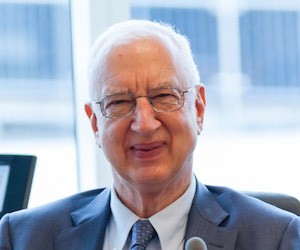 Today, I launched an online video series (“Clause 8”) that will feature interviews with prominent members of the IP community.  The first posted interview is with former Chief Judge of the Federal Circuit, Judge Paul Michel.  The interview builds on a great series of interviews previously conducted by Gene Quinn and posted on this website.  As the readers of this website know well, Judge Michel is a legendary appellate Judge and has become known for his tireless advocacy on behalf of America’s patent system since his retirement in 2010.

My interview with Judge Michel coincidentally took place the day after President Donald Trump’s first address to a joint session of Congress.  A significant part of our discussion focused on how fixing America’s patent system is necessary for meaningful economic growth for America’s workers and America’s global competiveness over countries like China.  Not surprisingly, Judge Michel thinks that “[w]hile we’ve been weakening our patent system in many ways in recent years, China and other countries have been greatly upgrading their patent systems . . . investment is shrinking here and it’s growing elsewhere” (starting at 2:01 mark of the interview).

Judge Michel kept returning to the theme that the lack of new jobs “is the biggest single problem in America today,” and that “whether you talk about job creation or growth or revival of distressed cities . . . the innovation ecosystem is at the heart of the solution.”

However, this is not just clever positioning by Judge Michel in response to the 2016 election results.  Judge Michel was making the same arguments way back in 2010!  In a New York Times op-ed, published on August 5, 2010, Judge Michel argued that fixing America’s patent system may be the “best strategy” to “jump-start job creation in our stalled economy.”  In another op-ed the following year, Judge Michel highlighted that the ongoing failure to fix America’s patent system is costing an enormous amount of American jobs and bemoaned that President Obama was relying on advice from “a who’s who of outsourcing American jobs.”

Both of these op-eds were co-written with Henry R. Nothhaft.  At the time, Nothhaft was the CEO of the technology company Tessera and co-authored the book “Great Again.”  Yes, as in Make America Great Again.  Although it was originally a Reagan campaign slogan, Nothhaft’s book presaged Trump’s revival of the slogan and Trump’s campaign book with the same title, “Great Again,” by over five years.

To Judge Michel’s chagrin, policy makers in Washington, D.C. did not heed their advice of fixing America’s patent system to cure the economic malaise that is still being experienced by millions of Americans years after the Great Recession.  As countless commentators from across the political spectrum have pointed out, this economic malaise arguably led to Trump’s surprise rise and electoral victory in 2016.

If anything, Judge Michel believes that the situation has gotten only worse since those op-eds were written back in 2010 and 2011.  In the straight-talking manner Judge Michel has become famous for over the years, he told me: “I think [the American patent system is] doing badly, I think it’s highly distressed, has been substantially weakened and needs serious repair, revival, and strengthening.”

Specifically, Judge Michel talked about how the Supreme Court’s recent patent eligibility decisions and the formation of the Patent Trial and Appeal Board (PTAB) have made the situation worse by weakening patent rights in America.  “There’s such uncertainty because of the vague, subjective criteria for deciding eligibility, in both the electronic world and the human health science world, that investment is going elsewhere,” Judge Michel stressed.

Nonetheless, Judge Michel remains optimistic that Washington, D.C. will rise to the challenge of improving America’s patent system.  We discussed the path forward and how stronger patents fit into Trump’s Make America Great Again agenda, with Judge Michel pointing out that he’s “hopeful that the new Secretary of Commerce, whoever is going to be running the Patent Office will pay great attention that and will strengthen the patent system so we can create the jobs, increase the productivity, speed up the growth of the economy.”

Is Judge Michel being too optimistic?  During the interview, Judge Michel specifically noted that “Tomorrow, the PTO commissioner could revise the [PTAB proceeding] regs . . . That doesn’t require the Supreme Court or the Congress to act.  It could be done immediately by the PTO if it exercises strong vigilant leadership.”

About a month after I taped my interview with Judge Michel, the former head of Trump’s domestic issues transition team, Ken Blackwell¸ vigorously argued in defense of a strong patent system.  And, shortly after Blackwell’s rallying call, USPTO Director Michelle Lee, now serving under President Trump, announced an initiative to review and improve PTAB proceedings in line with Judge Michel’s suggestion.

Time will tell, but these are definitely signs that the Trump administration shares Judge Michel’s view that improving America’s patent system is a vital key to Making America Great Again.

If you are interested in hearing more about this subject, a story about how Judge Michel almost wasn’t nominated, and many other fascinating insights into the patent field, please watch my entire interview with Judge Michel by visiting Clause8.TV.