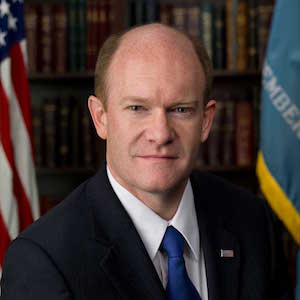 Senator Chris Coons (D-DE) represents Delaware in the United States Senate. He was elected in 2010 in a special election to replace Joe Biden who resigned from the Senate upon being elected Vice President. Coons was reelected to a full six-year term in 2014.

Senator Coons is a member of the Senate Appropriations, Foreign Relations, Judiciary, Small Business and Entrepreneurship, and Ethics committees. Having spent eight years working in the private sector for an advanced materials manufacturing company in Delaware prior to being elected to the Senate, Coons knows firsthand how important intellectual property protections are to promoting investments in breakthrough technologies and cures. On the Senate Judiciary Committee, he has fought to strengthen and modernize our nation’s patent system and establish new protections for American inventions and innovations.

A Few Thoughts on the Supreme Court’s Section 101 Jurisprudence

I am particularly concerned about the impact this case law has on the patent application process. Instead of focusing on novelty and clarity, examiners and applicants alike spend time struggling to make sense of Section 101 jurisprudence. That is a serious misallocation of the limited resources of both patent examiners and applicants, leading to longer examination times and less reliable patent grants. Delays in patent review and patent grants can interrupt a startup’s lifecycle, negatively influencing employment growth, sales, and subsequent innovation. This is just one of several factors lengthening patent examination, but it is one that may warrant a congressional response.