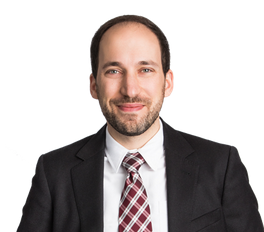 , Ph.D., is a patent attorney at Kilpatrick Townsend & Stockton LLP. His practice focuses on patent prosecution and counseling in the areas of materials processing, electronics, and software. Prior to practicing law, he worked as a natural sciences researcher in Canada and the United States.

For more information, or to contact Leron, please visit his firm profile page.

As computing power and large datasets become more available, the use of artificial intelligence (AI) in technology is exploding around the world. As an indicator of the impact of AI, private equity investment in AI start-ups attracted 12% of worldwide private equity investments in the first half of 2018, reflecting a four-fold increase from just 3% in 2011, across all major economies. In the United States, the U.S. Patent and Trademark Office (USPTO) has taken steps to adapt to AI inventions, asking in August of 2019 for public comment on questions ranging from AI inventorship to how to best consider AI elements of inventions. The World Intellectual Property Organization (WIPO) has also asked similar questions, as part of its conversation on intellectual property (IP) and AI, which published its first Draft Issues Paper on IP policy and AI in December of 2019 and is continuing to hold meetings on the topic.

Across Industries, the Female Inventor Rate is Half the Female Employment Rate

The Study of Underrepresented Classes Chasing Engineering and Science Success (SUCCESS) Act of 2018 directs the U.S. Patent and Trademark Office (USPTO) to study and report to Congress on the number of patents applied for and obtained: (1) by women, minorities, and veterans; and (2) by small businesses owned by women, minorities, and veterans. In partial fulfilment of that directive, the USPTO Office of the Chief Economist, in February of 2019, published “Progress and Potential – A profile of women inventors on U.S. Patents”. The stated purpose of the report is “to learn more about the progress and potential of women in patenting,” as a means to “harness underexploited talent.”… We believed that it may be instructive to attempt to pair women-inventor-representation data and women-workforce-representation data across multiple technological fields. Our data indicates that, across industries, employed female engineers are half as likely to be listed as inventors on patent applications as compared to their male counterparts. Why might females be underrepresented as inventors, even within industries where many females are employed? The authors submit that it is essential to investigate these root causes.