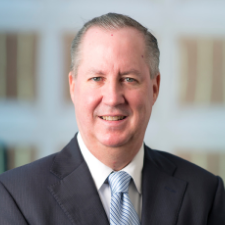 Blair M. Jacobs is a principal at McKool Smith. Representing high technology innovators large and small, Mr. Jacobs serves as lead trial counsel and strategist in intellectual property and trade secret matters in district courts nationwide and is a leading practitioner at the Federal Circuit Court of Appeals, where he has presented numerous oral arguments. He has served as lead appellate counsel on several well-known, precedential opinions shaping patent law. Mr. Jacobs is first and foremost a nationally recognized trial attorney with extensive experience trying and winning cases in courts throughout the country.  From his time in the Department of Justice forward, he has been sought out and has led teams in bet-the-company cases destined for trial from the outset.

Mr. Jacobs also has litigated extensively before the U.S. International Trade Commission (ITC), representing both complainants and respondents in Section 337 investigations involving a wide range of products and technologies. He has successfully handled numerous cases through trial and Commission review, and he has a deep understanding of the unique rules and practice in this forum as well as related proceedings before the Customs and Border Protection, the Federal Circuit, and the Court of International Trade.

Over more than three decades of practice, Mr. Jacobs has handled a myriad of patent competitor and trade secret cases and has resolved disputes across the gamut of contentious IP issues. He is often selected to lead teams in matters requiring the highest level of trial acumen and planning and prides himself in working collaboratively with in-house counsel on trial strategy from the outset. And when it comes to trial, Mr. Jacobs has led trial teams through multi-week jury trials on numerous occasions and this has provided unique insights on what it takes to win.  According to IAM Patent 1000, he “creatively puts arguments together in a way that juries find entertaining – and persuasive.”

Prior to entering private practice, Mr. Jacobs served in the Army and then with the United States Department of Justice (DOJ), where he acted as first-chair trial counsel in highly publicized civil cases brought against various agencies of the federal government. While at DOJ, he was selected to serve at the White House as counsel for the President’s Foreign Intelligence Advisory Board on investigations involving human rights issues and the intelligence community. He also served on the faculty of the Attorney General’s Advocacy Institute.

There is a surge of protests in the air and increased cries of “structural bias” concerning the Patent Trial and Appeal Board’s (PTAB’s) granting of patent reviews, fueled by the July report issued by the U.S. Government and Accountability Office (GAO) revealing that 75% of surveyed PTAB judges said that control by office directors and Board management affected their autonomy.

Past Events with Blair M. Jacobs