“By treating [the Rogers] test as applicable to all Lanham Act cases involving allegedly infringing ‘expressive works,’ the Ninth Circuit has made it ‘nearly impossible for any trademark holder to prevail’ in a broad category of infringement suits.” – Brief of the U.S. Solicitor General to SCOTUS 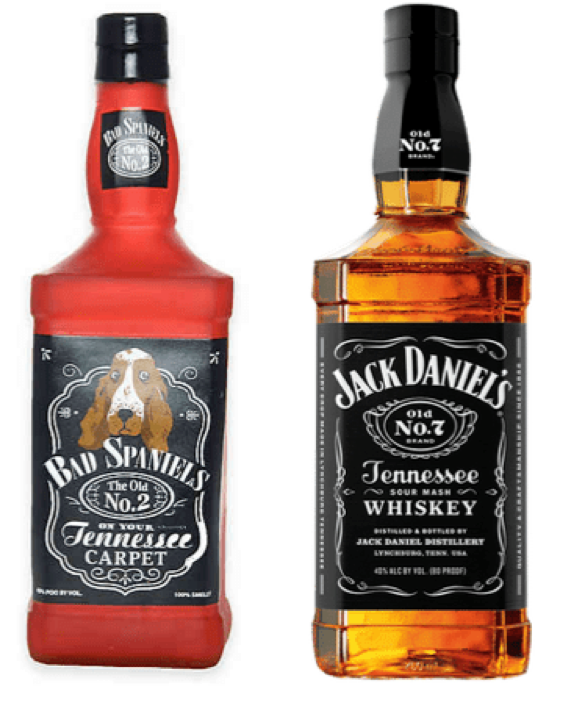 Last November, the U.S. Supreme Court granted a petition for writ of certiorari filed by famed whiskey brand owner Jack Daniel’s Properties. The petition filed by Jack Daniel’s appealed the U.S. Court of Appeals for the Ninth Circuit’s March 2020 ruling that a “Bad Spaniels” dog toy marketed by VIP Products was an expressive work entitled to First Amendment protections against trademark infringement liability under the Rogers test. On January 18, a series of 16 amicus briefs were filed with the Supreme Court, the vast majority of which urged the nation’s highest court to reverse the Ninth Circuit’s ruling, limit the application of the Rogers test to clearly artistic works, and exclude consumer products that happened to have some humorous expression. Several amici also pushed back on the Ninth Circuit’s ruling that VIP Products’ use of Jack Daniel’s marks was noncommercial.

Scholars, Former Judges, and Former Government Officials: Encroachment on Goodwill is the Essence of Trademark Violation

“The central importance of protecting the goodwill developed by a trademark owner, as embodied in a trademark, has long been axiomatic to American trademark law,” the brief reads. As Francis Upton expressed in his 1860 treatise on trademark law, “[a]n unlawful encroachment upon the good will of a business, is sometimes the essence of the wrong involved in the violation of a trade mark.” VIP Products’ decision to use Jack Daniel’s highly recognizable trademarks and trade dress in its dog toys is classic trademark piracy because it takes advantage of this goodwill, the brief argues.

The Ninth Circuit’s failure to consider Jack Daniel’s property interest at stake does not follow the Supreme Court’s own analysis of expressive uses of trademarks, the scholars, former judges and former officials argue. For example, the Court affirmed an injunction in 1987’s San Francisco Arts & Athletics v. U.S. Olympic Committee prohibiting SFAA from promoting the “Gay Olympic Games.” While allegedly an expressive use of the USOC’s “Olympic” mark, the Court found that protecting the value in the mark derived from the USOC’s efforts did not prohibit SFAA from conveying its message but only restricted the way in which the message could be conveyed. The Ninth Circuit’s disregard of this balancing of interests in the present case is particularly damaging to trademark law given the district court findings that VIP Products intended to copy Jack Daniel’s marks and trade dress and that one-third of consumers were confused by VIP Products’ use of those properties, amici here argue.

Intellectual Property Professors and Adjuncts: The First Amendment is Under Attack from ‘Chicken-Little’ Crying Brand Owners

Another group of IP professors and adjunct professors filed an amicus brief arguing that courts should apply heightened scrutiny against Lanham Act claims against expressive works, contending that the traditional likelihood of confusion test is ill-suited to protect the public interest in free expression.

“The First Amendment is under attack by brand owners that lack a sense of humor, want to monopolize discussion about their brands, and exaggerate the harm expressive references cause to their trademarks. Contrary to their Chicken-Little cries, their brands will not be eviscerated by humor, commentary, criticism, or reference. For that reason, absent explicitly misleading speech or pretextual uses that are clearly gratuitous and not really about expression at all, respect for the First Amendment requires that their trademark rights yield to the right to free expression.”

The IP professors propose modifying the Rogers test so that a defendant making a prima facie case that an accused work is expressive, courts will presume that Lanham Act liability is precluded. That presumption can be rebutted by a plaintiff showing evidence that the defendant’s use of the mark is either explicitly misleading or clearly gratuitous. A defendant’s use would be explicitly misleading if they made a false statement regarding the source of the work, while evidence that a defendant’s use lacks a good faith nexus to the purported expression would be considered when assessing a clearly gratuitous use. These modifications would fix ambiguities in the Rogers test that have caused lower courts to apply the test unevenly, the professors and adjuncts argue.

The office of the U.S. Solicitor General filed a brief in this case arguing that the Ninth Circuit erred by failing to apply the traditional likelihood of consumer confusion test to VIP Products’ allegedly expressive work. The Solicitor General contends that the Ninth Circuit’s threshold test for liability, under which a defendant cannot be held liable for infringement if the use of the mark is artistically relevant and the defendant doesn’t explicitly mislead consumers about the good’s source, has no basis in the language of the Lanham Act.

In dealing with cases involving supposed parody products, such as VIP Products’ “Bad Spaniels” dog toy, courts should simply take the nature of the parody into account when assessing likelihood of confusion, which the Solicitor General notes already uses a flexible multi-factor test. First Amendment concerns do not justify displacing the likelihood of confusion standard in the context of expressive works, the Solicitor General argues. Further, the Rogers test was a poor choice for assessing Jack Daniel’s infringement claims, according to the brief, as the Second Circuit’s 1989 ruling in Rogers v. Grimaldi involved a false advertising claim and not an infringement claim. “By treating that test as applicable to all Lanham Act cases involving allegedly infringing ‘expressive works,’ the Ninth Circuit has made it ‘nearly impossible for any trademark holder to prevail’ in a broad category of infringement suits,” the Solicitor General wrote, quoting the district court’s own language in the present case after remand by the Ninth Circuit.

The Solicitor General also asserted that the Ninth Circuit was wrong to find that the “Bad Spaniels” dog toy met the noncommercial use exception to Jack Daniel’s dilution claims under the Trademark Dilution Revision Act of 2006, which created categories for works that avoid dilution liability for parody, news commentary and noncommercial use. The Ninth Circuit’s interpretation, under which any use of a mark conveying an expressive message is a noncommercial use, is unsound according to the Solicitor General because it renders the other excluded categories superfluous and fails to respect the limits that Congress placed on these fair-use exclusions.

A coalition of industry groups representing the alcohol industry, including the American Craft Spirits Association, Wine Institute and The Beer Institute, filed an amicus brief arguing that the Ninth Circuit’s decision below presents a public safety issue. The ruling for VIP Products would upend efforts within the alcohol industry to self-regulate advertising so that children are not targeted by their product advertising. Those efforts rely heavily on the ability of beer, liquor and wine producers to control their trademark rights against even allegedly “humorous” knock-off products that can confuse consumers as to the kind of messaging that the alcohol industry endorses. As the industry groups point out, the district court in the present case found that 29 percent of consumers surveyed expressed confusion as to whether Jack Daniel’s endorsed the “Bad Spaniels” toy.

The Ninth Circuit’s noncommercial use determination for the expressive, humorous use of trademarks is especially dangerous in the alcoholic products context, the industry groups allege:

“As a quick internet search confirms, jokes about unsafe drinking —such as losing time to blackouts or using alcohol as a substitute for mental health services—are unfortunately all too common. Despite the industry’s work to promote safe consumption, some inevitably find humor in alcohol abuse… This Court should not green-light using such marks in, for example, t-shirts featuring famous alcohol brands that make light of drunk driving or binge drinking—as it would if the infringer need only claim that such infringements are “humorous” to receive Lanham Act immunity.”

The industry groups point out that there are similar issues with other industries where the misuse of marks for humorous purposes could pose a dangerous public health risk, including the tobacco and pharmaceutical industries.

The Ninth Circuit’s ruling also disregards the First Amendment interests that trademark owners have in being the sole “speaker” of the trademark that they own and their interest in controlling the messages with which their marks are associated, the industry groups argue. They assert that the traditional likelihood of confusion test effectively balances First Amendment interests on both sides of a suit even when an expressive work is involved, which was the Second Circuit’s approach in assessing trademark infringement liability in Twin Peaks Productions v. Publications International (1993). By elevating humorous messages over other types of speech, the alcohol industry groups argue that the Ninth Circuit actually creates a First Amendment issue by developing an unconstitutional content-based distinction in governmental speech regulation.

The International Trademark Association (INTA) filed an amicus brief joining the chorus of voices telling the Supreme Court that the Ninth Circuit’s application of Rogers in the lower decision used an improperly broad definition of an expressive work to trigger the test. Rogers originated under circumstances where the Second Circuit wanted to afford protections to clearly artistic works, like movies and books. By contrast, the Ninth Circuit’s definition qualifies any product containing any expression as an “expressive work.”

While INTA expressed no opinion on how the Ninth Circuit should apply the Rogers test, the trademark industry group argued that the appellate court erred in applying the test in the first place. INTA asserts that no other circuit court has applied Rogers to ordinary consumer products, even when those products contain some expression, making the Ninth Circuit’s decision “an unprecedented departure from established law.”

The present case affords the Supreme Court with a great opportunity to clarify when an allegedly infringing work is expressive such that the Rogers test should be applied. INTA proposed that the Court define an “expressive work” as a work in which the expression is inextricable from the product. For example, INTA notes that while a greeting card stripped of its expression only functions as a blank piece of paper, stripping the infringing expression from VIP Products’ “Bad Spaniels” dog toy still yields a functional dog toy.