In Defense of Patentability of Mathematical Formulas and Relationships

All footnotes can be viewed here. 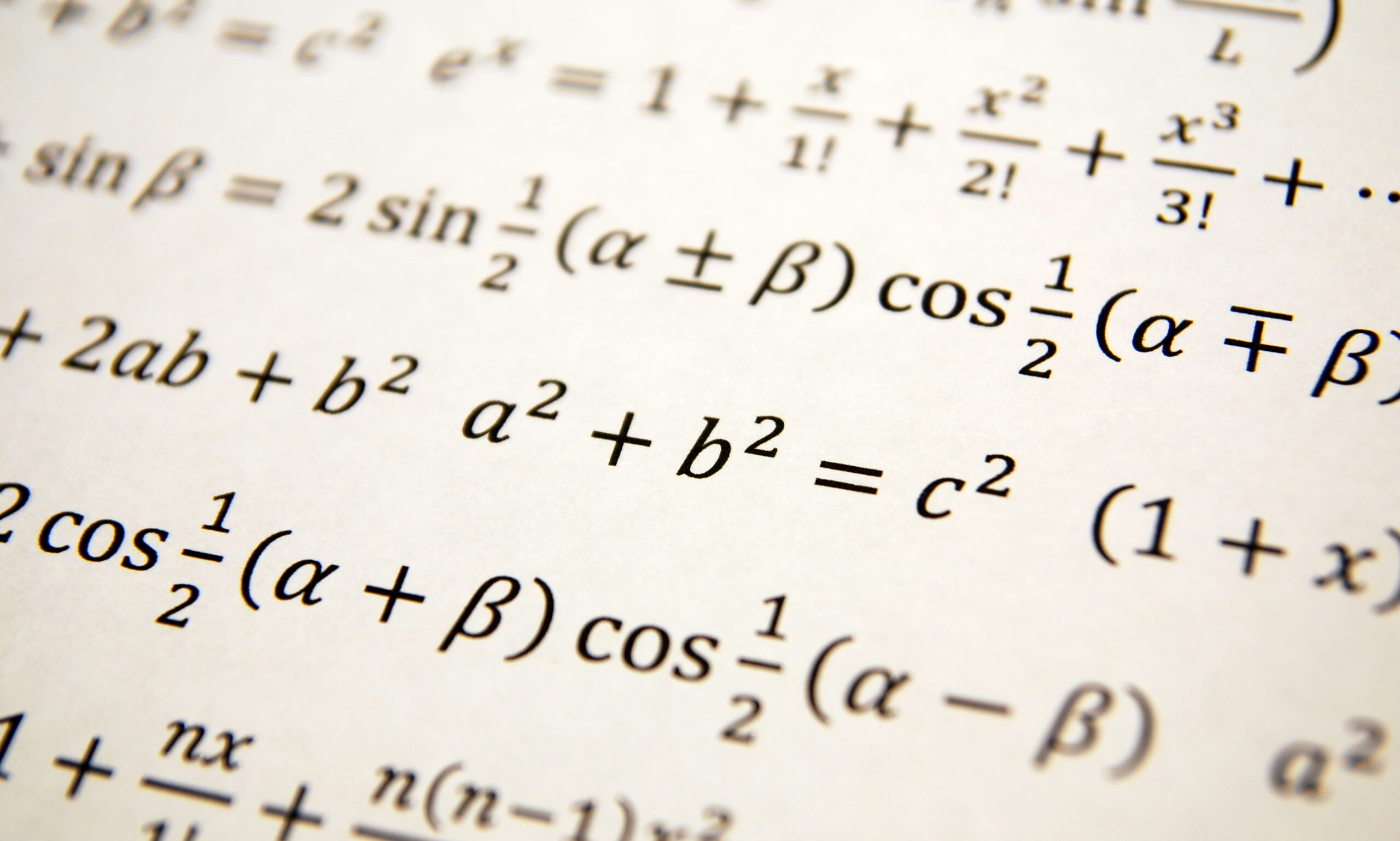 Mathematics as a Language for Expressing a Tool or a Model

The term “Algorithm,” while broadly including any step-by-step method such as a baking recipe,[3] is often used to refer to a mathematical relationship or formula.[4] Algorithms don’t fare well under the current view of case law[5] either, and need auxiliaries to come to their rescue.[6] Such auxiliaries come to play at the initial step of determining eligibility and are apart from the core requirements of inventiveness such as novelty, nonobviousness, and adequacy of disclosure.[7]

The paper sets forth three arguments regarding the nature and treatment of “Mathematical Formulas and Relationships.”

Third, there is a category of “Mathematical Formulas and Relationships” that are currently considered unpatentable because they are deemed expressions of “Laws of Nature.”[11]  Members of this category represent, at best, approximate “Models” of observed physical phenomena.[12] These “Models” evolve in terms of the domain of their applicability and are replaceable in other domains or other models become more accurate in modeling the same phenomenon and therefore the original model gets replaced.[13]

The so called “Laws of Nature” that may be expressed by a mathematical formula or equation are in turn equated with “Fundamental Truths.”[14] With a certain degree of approximation or within certain domains of applicability, these may represent a workable version of the truth. However, being mere approximate and replaceable “Models” of physical phenomena,[15] these so-called “Laws” could hardly represent an absolute or fundamental truth in general and across time and different domains. Rather, their approximate, domain-dependent applicability that results in their evolving nature points to the inventive mind of man.

Based on the above premises, an analysis must begin with acknowledging a “Mathematical Formula or Relationship” as a language and determining the content of what it expresses rather than excluding it categorically just because of the mathematical form of expression.[16]

Once the content expressed by the “Mathematical Formula or Relationship” has been determined, the next step is to see if the content expresses a “Tool” that has applicability across different areas of science or a “Model” of some particular physical phenomena.

The arguments regarding the nature of “Mathematical Formulas and Relationships” arrive at an incidental conclusion regarding AI[18] inventions.[19]

“Mathematical Formulas or Relationships” Are a Language like English or French

Mathematics provides a descriptive language that can be used to describe virtually everything in a precise manner. Mathematics can be used to describe not only laws of nature, but also many other concepts, such as defining proportions to combine materials, expressing a cost function to be optimized by a machine-learning algorithm … and so forth.[24]

When encountering a “Mathematical Formula or Relationship,” first find out what it says in English. It may be expressing something mundane and concrete about the pieces of fruit in a bowl.

“Mathematical Formulas or Relationships” are mere languages for expressing concepts and happen to be exceptionally well-suited for precise and concise expression of our understanding of physical phenomena.

Most of all “process, machine, manufacture, composition of matter, or any new and useful combination thereof,”[30] that are patented, use or rely on some form of “Mathematical Concept” for their construction or operation. This is akin to considering a chair to be patentable subject matter but excluding the hammer that was used for building it from patentability. The “Mathematical Concepts” that are excluded from the categories of patentable subject matter sometimes operate like a hammer in that they do not become part of the finished product and other times like a nail[31] that becomes part of the finished product. Whether, figuratively, a hammer” or a nail, the “mathematical concept” is not patentable on its own while no one questions the patentability of literal hammers and nails.

Some “Mathematical Formulas or Relationships” can be applied to a wide variety of different tasks in different technological areas. These are often of the “Tool” type. A mathematician must devise them and must recognize their utility for particular analytical tasks. The tasks that utilize these mathematical tools might not have been possible at all without the devised tools or may have been doable, just not as easily or elegantly. A carpenter can drive a nail using a piece of rock but if he has the correct type of hammer, he can do the same job much more precisely, rapidly and easily.

The Preface to Brunton and Kutz[33], provides an insight to the “Tool” characteristic of a number of mathematical methods and supports the “hammer” analogy for mathematics:

It is likely that almost all of the examples in the “small handful of new techniques” are considered patentable subject matter and are the “Chairs” of our analogy. Yet, the “mathematical methods,” the “hammers” or “nails” of the analogy, that make them possible are excepted from patentability.

The term “Algorithm” is often used as the quintessential example of mathematical relationships and formulas that are not patentable.[35] However, according to Brunton and Kutz, the “machine learning community” are looking for “scalable, fast algorithms” that have high “prediction quality”

[D]ata science has been largely dominated by two distinct cultural outlooks on data. The machine learning community, which is predominately comprised of computer scientists, is typically centered on predication quality and scalable, fast algorithms. Although not necessarily in contrast, the statistical learning community, often centered in statistics departments, focuses on the inference of interpretable models.[36]

Thus, new or improved “Algorithms” that have the characteristics of being “scalable,” and “fast,” and have better “prediction quality” need to be “devised,” “thought of,” or in fact “invented” to lead to better outcomes for “machine learning.”

Another example of statements indicating that many types of “Mathematical Formulas and Relationships” are “Tools,” which are inventible and improvable and whose nature is determinative in the possibility and desirability of the product that is built, appears in Brunton and Kutz as follows:

…  Pattern extraction is related to the second theme of finding coordinate transforms that simplify the system. Indeed, the rich history of mathematical physics is centered around coordinate transformations (e.g., spectral decompositions, the Fourier transform, generalized functions, etc.), although these techniques have largely been limited to simple idealized geometries and linear dynamics….[37]

Thus, something as purely mathematical as Fourier transform has a direct bearing on whether some physical device can be made. Further, these purely mathematical constructs are created by someone and would not have existed but for their creation by a person, namely before their “invention.”

Brunton and Kutz begin with singular value decomposition (SVD) and attribute the possibility of existence and the progress in many modern technological fields to the advent of SVD. Under “Historical Perspective,” Brunton and Kutz include a paragraph listing a number of references that discuss the history and development of SVD.[38]  This is the history of an “invention” and a series of possibly novel and nonobvious improvements on this invention that have not been patentable because of the categorical exclusion of algorithms.

Fourier’s seminal work provided the mathematical foundation for Hilbert spaces, operator theory, approximation theory, and the subsequent revolution in analytical and computational mathematics. Fast forward two hundred years, and the fast Fourier transform has become the cornerstone of computational mathematics, enabling real-time image and audio compression, global communication networks, modern devices and hardware, numerical physics and engineering at scale, and advanced data analysis. Simply put, the fast Fourier transform has had a more significant and profound role in shaping the modern world than any other algorithm to date.[39]

By their nature, such “Mathematical Formulas and Relationships” are well-defined and fleshed out to the minutest detail[40] which is the antithesis of being “Abstract.”

Their universal utility[41] may have been the enemy of their patentability.[42] It ought not be. For one, we hear only of the useful ones. For every useful mathematical tool that is created by a mathematician there are many that never see the light of day.[43]

“Mathematical Formulas and Relationships” that Express a “Law of Nature” Can Be Approximate, Domain-Limited, and Evolving Models – Like a Crash Test Dummy Used as a Model of a Person or a Mannequin in a Store Display

Some “Mathematical Formulas and Relationships” express a “Law of Nature” which is considered a “Fundamental Truth.” Examples include Newton’s Laws that are the foundation of Classical Mechanics, the second of which may be expressed as F=ma, and Einstein’s theory of special relativity expressed as E=mC2 which is the basis of Quantum Mechanics.[44] A “theory” is a scientific hypothesis that is supported by ample empirical evidence.[45] A “law” is the same hypothesis having even more empirical evidence supporting its correctness.[46] Einstein’s theory illuminates and limits the domain of applicability of Newton’s Laws.[47] Therefore, Newton’s “Laws” could not have been “Fundamental Truths” in the broad sense but are workable models within a certain domain of applicability and as certain approximations of a physical phenomenon.

The “Laws of Nature” are concise capsules that model and express certain observed correlations and have been indispensable in the furtherance of science and technology.[48]  They are nevertheless mere “Models” just like a “Dummy” is a model of a human body in certain type of domain. A “Mannequin” is helpful in fitting clothing because it is a model of the outer shape of a human body. Its utility, however, is limited by how closely it models a human being and is not useful, for example, as a dummy for a car crash test. A crash test dummy must reflect the strength of material of the human body. Same is true of the “Laws of Nature” that “Model” our observations of the physical phenomena:  some are coarser; some are finer, and each may have a different domain of applicability; each focuses on accuracy in some particular aspect; they are all useful for a limited range of applications; each may reveal some of the truth and none expresses all of the truth.[49]

Perhaps because “Algorithms” and “Math” have been disqualified from patentability, we have arrived at today’s discussions regarding the patentability of AI inventions[50] that seek to patent the automatic outputs of a machine.[51]

All of machine learning revolves around optimization. This includes regression and model selection frameworks that aim to provide parsimonious and interpretable models for data [266]. … When the model is not prescribed, then optimization methods are used to select the best model.[52]

Whether a tool of analysis or a model of a physical phenomenon, “Mathematical Formulas and Relationships” sound like inventions and walk like inventions, and they are not as divine and infallible as the courts have deemed them to warrant an exalted exception.[53]

Accordingly, at least part of that which is inventive with respect to AI is the “invention” of the “Person” who creates the AI algorithms. The “learning” and “improvement” of AI is the result of its underlying algorithms; it is not organic.[54]

Wesley William Wallender Wesley W. Wallender is Emeritus Professor of Hydrology and Engineering at the Departments of Land, Air and Water Resources (Hydrology Program) and Biological and Agricultural Engineering of the University of [...see more]

Bahram Ravani Bahram Ravani, PhD is a distinguished Professor of Mechanical Engineering at the University of California – Davis. He received his PhD from Stanford University in California 1982, his MS with [...see more]