“In prior times, the CAFC worked very hard to speak with a clear, consistent, stable, single voice and now it’s every panel for itself. You make the law in your image if you can get one other panel member to join your opinion; that’s not law, that’s just power plays.” – Retired CAFC Chief Judge Paul Michel 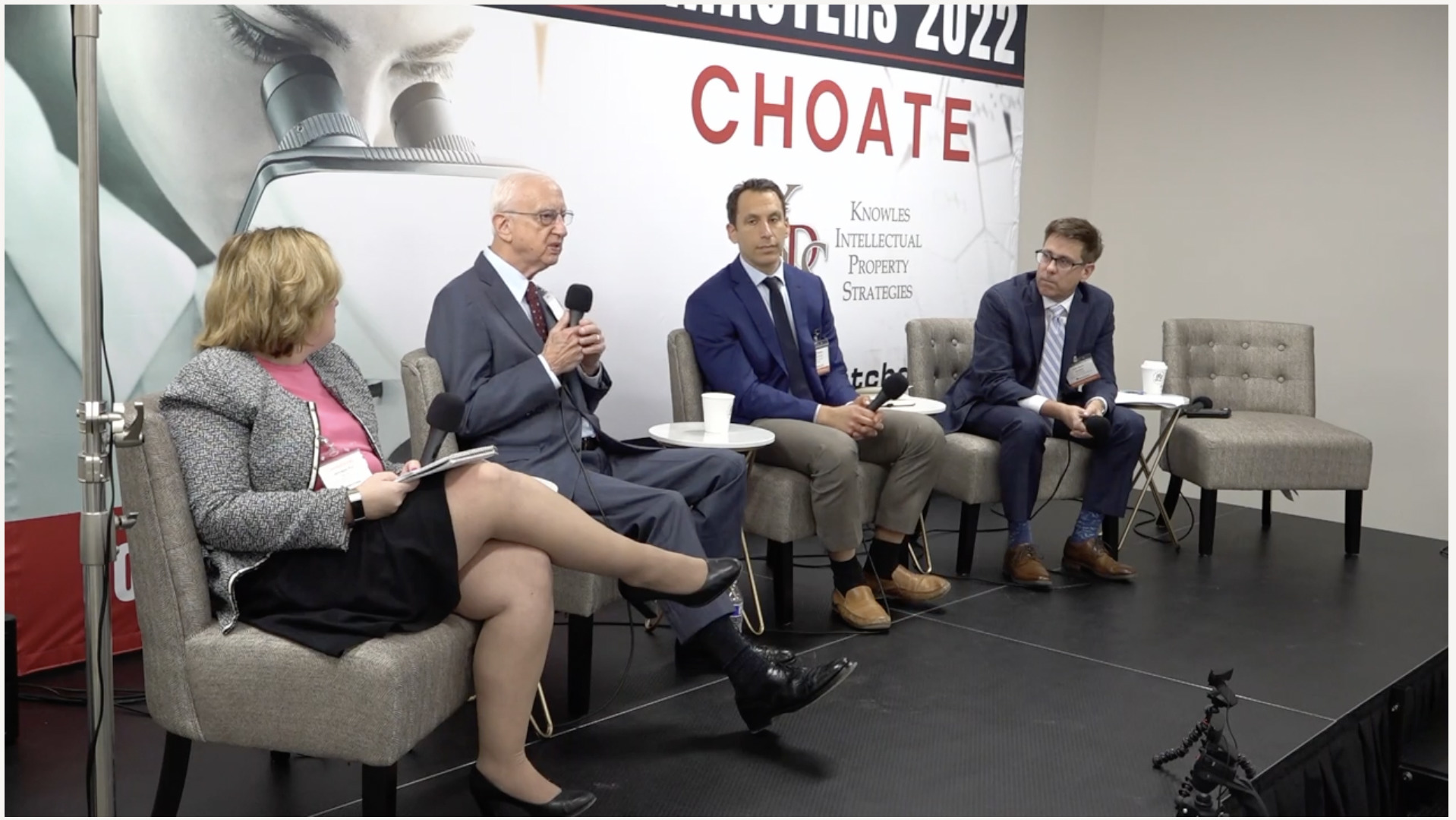 During IPWatchdog’s Life Sciences Masters 2022 today, Retired Chief Judge of the U.S. Court of Appeals for the Federal Circuit (CAFC) Paul Michel said a lot could be fixed by the CAFC itself with respect to patent eligibility law if it would just go en banc more often. “By my recollection the Federal Circuit hasn’t gone en banc on a major patent case in a decade,” Michel said. “And yet, all CAFC judges are on record saying that 101 law is a total mess and needs to be fixed.”

Michel was speaking on a panel moderated by Laura Smalley of program sponsor, Harris Beach, and including Mike Cottler of biosimilars company Alvotech and Thomas Stoll of Genentech. The panelists were discussing the effect of U.S. patent eligibility law on the life sciences industry, including the potential impact of current efforts to reform patent eligibility law, such as Senator Thom Tillis’ (R-NC) Patent Eligibility Restoration Act. While Michel said he believes it’s ultimately Congress’ job to make the kind of policy judgments the Supreme Court and Federal Circuit have been making in this sphere, there is still a lot more the Federal Circuit could be doing to help the situation:

“The job of the court is to police the uniformity of its own doctrine and its own case law by going en banc when there are inconsistent or conflicting decisions by individual panels. So, there’s been a tremendous failure on the part of the Federal Circuit, first to provide clarity and rigorous analysis and rationalism, but secondly to clean up disparate decisions and provide clarity by going en banc. They have the power to do that, they have the obligation to do that—they used to do that all the time in major cases, and in prior times, the CAFC worked very hard to speak with a clear, consistent, stable, single voice and now it’s every panel for itself. You make the law in your image if you can get one other panel member to join your opinion; that’s not law, that’s just power plays, and it’s really a very unfortunate development. We could make a lot of progress, whatever the Supreme Court or the Congress does or doesn’t do, if only the Federal Circuit would go en banc to do its job.”

As the self-proclaimed “contrarian” on the panel, Cottler said he believes Section 101 law is fair as is and noted that “for the most part, pharmaceutical patents have withstood 101 challenges,” pointing to Vanda v. West-Ward as one example. “Over time, even though there’s some uncertainty at first, the law balances out,” he added.

Cottler also told attendees that “diagnostic patents are still possible in the U.S.—not the broader claims but the narrower claims,” and dismissed all the focus on investment moving to China as hyperbole: “China’s used as a bogeyman when we talk about innovation,” Cottler said. “There are lots of hurdles to doing business in China. I don’t think a company will move its business to China simply because you can get a patent on a broad diagnostic claim there.”

Michel countered that assertion, explaining that the Washington cliché goes, “if you want to understand what’s really happening, follow the money.” Michel recited statistics that he said show 88% of U.S. venture capital money used to be spent on R&D and commercialization in the United States. “Now it’s dropped down to about 50%,” Michel said. “So, it’s migrating overseas like crazy to more friendly countries that are supporting, across the board, new technologies. It looks to me like we already see worrisome evidence that the money flows are going out of real technology into entertainment when it stays in the country and going out of the country to Europe and Asia where incentives are better. The conclusion to draw from that seems to me to be self-evident.” 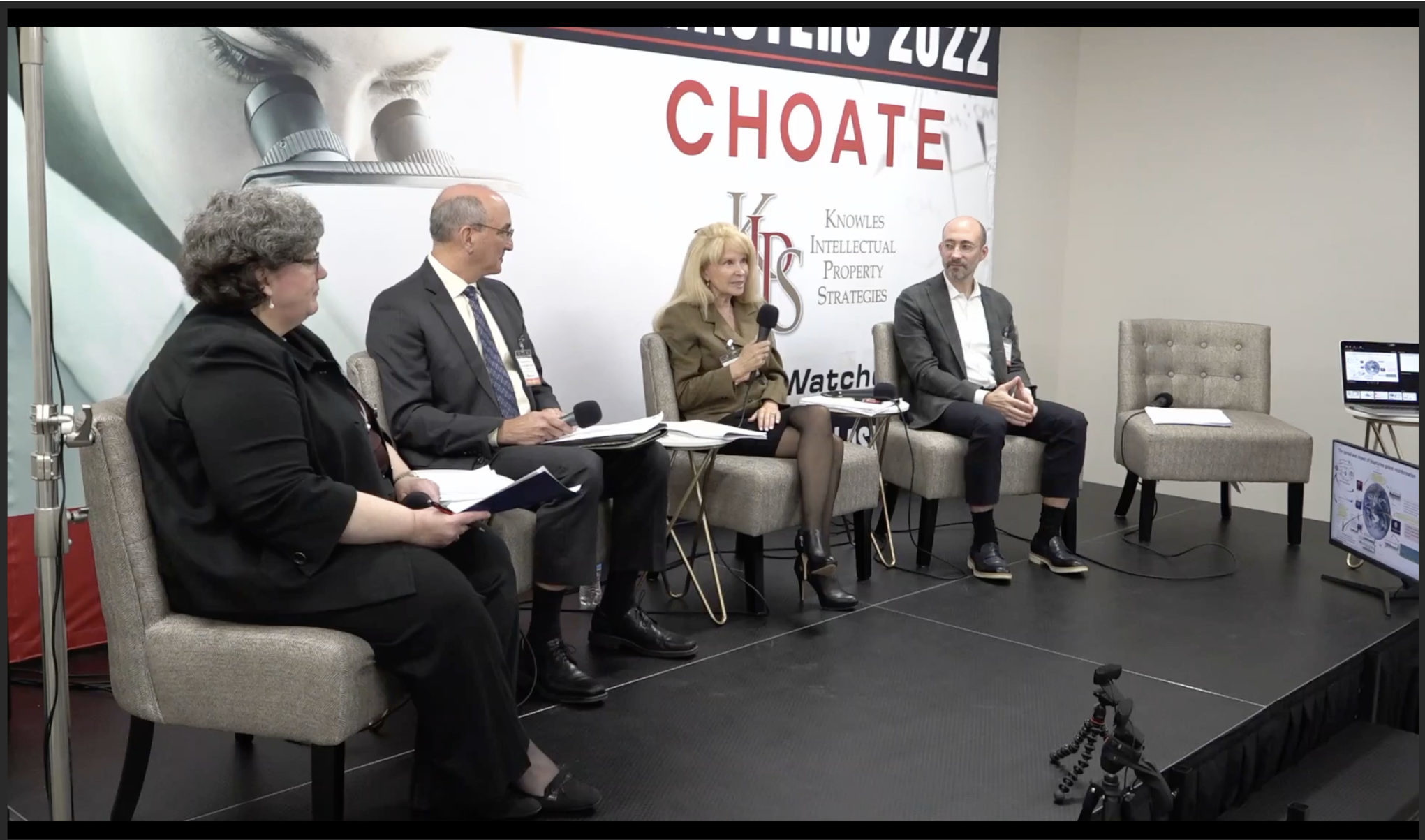 Another panel today examined the state of incentives for pharmaceutical innovation under the Biden Administration and included Sherry Knowles of program sponsor Knowles Intellectual Property Strategies; former Acting Deputy Director and interim Director of the U.S. Patent and Trademark Office (USPTO), Drew Hirshfeld; Corey Salsberg of Novartis; and was moderated by Doreen Trujillo of sponsor Saul Ewing Arnstein & Lehr. Knowles and Hirshfeld implored all present to submit comments on the USPTO’s recent Request for Comments relating to continuations, terminal disclaimer practices and collaboration with the U.S. Food and Drug Administration (FDA), among other issues, which Knowles and the other panelists said suffers from some misguided and unrealistic suggestions. For example, one question, originally posed by the group of senators who asked the USPTO to look into this issue, asks whether six months should be the appropriate timeframe within which an applicant must file a continuation application. “You can’t possibly anticipate all the continuation or divisionals in that timeframe,” Trujillo said.

Salsberg also took issue during the panel with some of the data relied on heavily by many in the Biden Administration, as well as others, to justify the needed changes—particularly the Initiative for Medicines, Access & Knowledge (I-MAK’s) assertions about the numbers of patents covering major drugs. Salsberg explained that the numbers are often inflated by pending and abandoned applications. As an example, Salsberg said Congress cited 73 patents on Novartis’ drug, Gleevec. “But there are only six,” he added. “They get to 73 by counting 44 abandoned patent applications as patents. Of the remaining 29, one was pending, and of the other 28, they don’t read on the drug at all.” 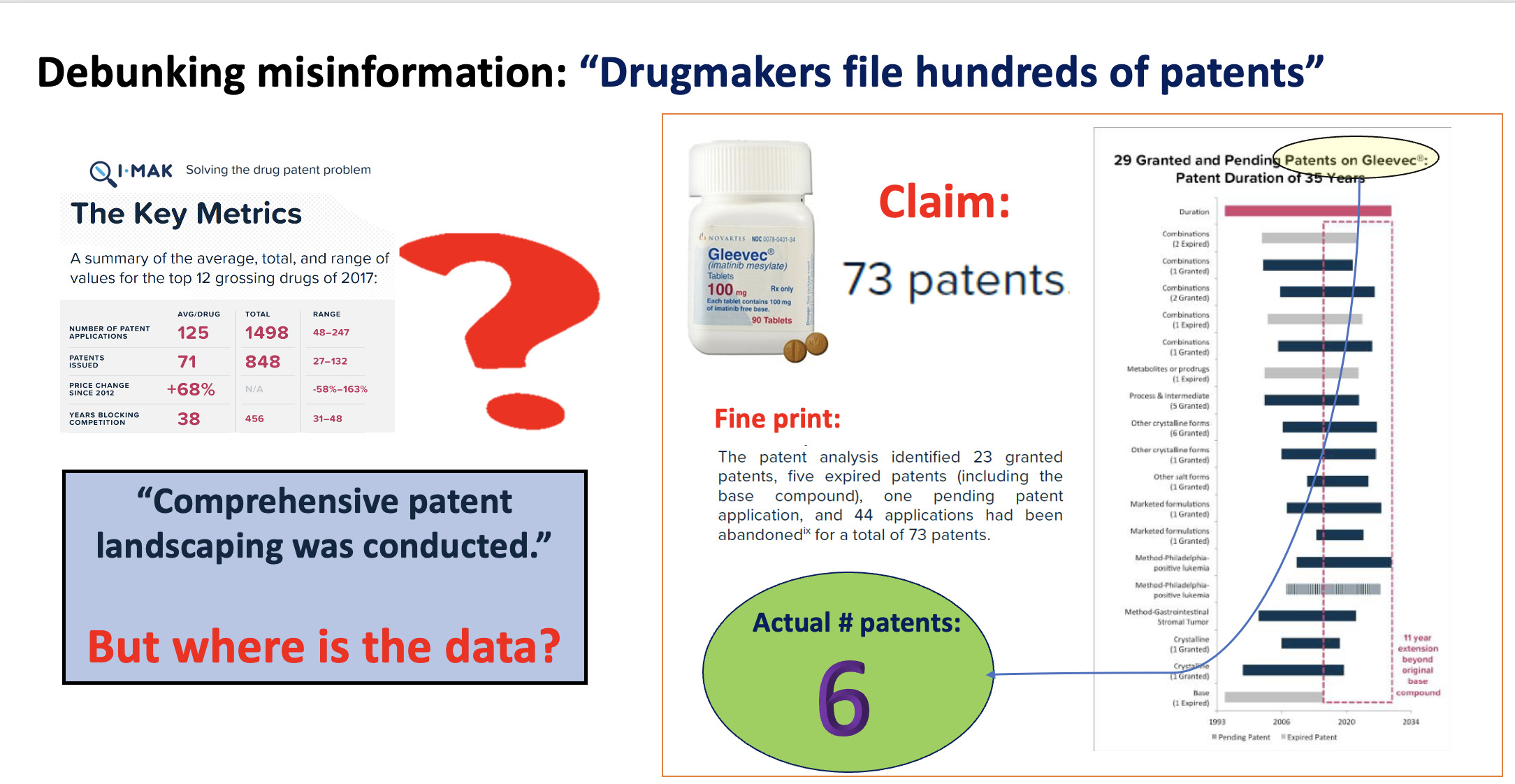 IPWatchdog Founder and CEO Gene Quinn said industry needs to “swing back” at such misinformation more often and more aggressively. “This to me screams of racketeering or tortious interference with business relations,” Quinn said. “I don’t understand across the spectrum in the patent world why people are not more aggressive at going back at these liars?”

Salsberg noted that he has presented the same information to the FDA and that Senator Tillis has been a huge champion in fighting back with letters to both I-MAK and the USPTO this year. “I really hope the Office will do something,” Salsberg said. “Before we make changes to the patent system [based on this data], we better make sure the information is accurate.”

Other panels today examined the future of the written description requirement, strategic considerations for claim drafting in life sciences, price fixing and antitrust liability as a way to control drug prices; and best practices for obtaining investment for life sciences companies.

Today also marked the first three inductees into the IPWatchdog Hall of Fame: Judge Michel, Phil Johnson and Sherry Knowles were honored with awards by Gene Quinn for their significant contributions to IP law and practice through the years.