“[Iancu and Kappos] recognized that, despite the long history of bipartisan support for IP, there’s been an erosion of that, and a concerted effort by forces, both in the United States and externally, to undermine the U.S. IP system.” – Frank Cullen

A new intellectual property (IP) organization launched today will be headed by former vice president of U.S. policy at the U.S. Chamber of Commerce’s Global Innovation Policy Center (GIPC), Frank Cullen, and features a Board of Directors comprised of bipartisan frontrunners in the IP realm. The Council for Innovation Promotion (C4IP) will aim to educate on the importance of innovation to the U.S. economy at a high level, and to fill the void its creators say exists with respect to clarifying the often-negative public narrative about the role of IP in access to innovation.

C4IP will depart from other existing IP organizations, which are largely focused on advocating for specific policy issues and promoting business interests, by providing real world examples of the ways IP benefits policymakers’ constituents, said Cullen, who will serve as C4IP’s Executive Director. “We want to tell that story and make people understand that this should be a bipartisan policy area,” he added. “This isn’t just about big business.” 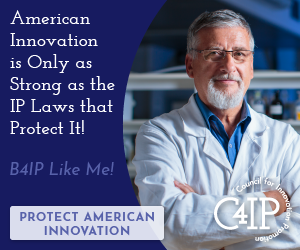 Iancu expanded on this point, explaining that one example of the ways in which C4IP plans to get its message out is to lead congressional delegations to introduce members of congress to the ways IP is benefiting actual inventors in their districts. “We want to localize the storytelling,” Iancu said. The organization also plans to identify and promote inventors at a local level, to fund research and studies that go to the fundamental issue of the role of IP in making the United States an innovation leader, and to run pro-IP ads on a continuous basis, among other activities.

The idea for C4IP was born out of discussions between Iancu and Kappos, who both recognized the need to tell a better IP story. “These two past USPTO directors recognized the need to address these concerns and to celebrate IP,” Cullen said. “They recognized that, despite the long history of bipartisan support for IP, there’s been an erosion of that, and a concerted effort by forces, both in the United States and externally, to undermine the U.S. IP system.”

The addition of O’Malley and Michel to the Board reflects the “multidimensional” nature of the IP system, and the bipartisan makeup is key, Iancu said. With Cullen’s background on the Hill, Kappos and Iancu’s experience at the USPTO and Michel and O’Malley’s knowledge of the Bench, “it provides a dynamic not many other organizations have,” Cullen added. 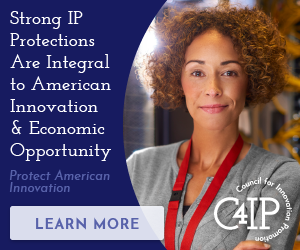 Both Iancu and Cullen lamented the fundamental misunderstanding of IP on both sides of the political aisle today. While Cullen said not all of the actors attempting to undermine the U.S. IP system are necessarily malicious—new business models that aren’t reliant on IP and a general cultural shift driven by technologies that encourage getting content for free play a part, for example—there are certainly criminals and foreign governments that are acting in bad faith. The biggest danger to U.S. innovation is becoming complacent about those realities, Cullen added.

Iancu said that 1) the erosion of the understanding about the role IP plays; 2) a mistaken belief that IP “just happens” in a free market economy; and 3) “the consistent and persistent negative rhetoric that uses meaningless pejoratives to depress the value of IP” are some of the biggest threats to U.S. IP today. The goal of C4IP will be in part to educate the public and that segment of policymakers who believe that IP acts as a barrier to access, rather than as a catalyst for the creation of innovative technologies, Iancu added. Both Cullen and Iancu pointed to the waiver of IP rights for COVID-19 vaccine technology under the TRIPS Agreement as one example of the bad policies that can result from such fundamental misunderstandings.

“The problem is this idea that ‘even if we tinker with these policies, we’ll be fine,’” Cullen said, adding: “Everyone agreed with the goal of putting more vaccines in arms, but IP was never the problem. It was the answer.”