#IPconsiderations for Protecting Hashtags as Trademarks

“The role of hashtags is important for trademark owners, who may have a real interest in registering their trademarks with the ‘#’ symbol when it is possible.” 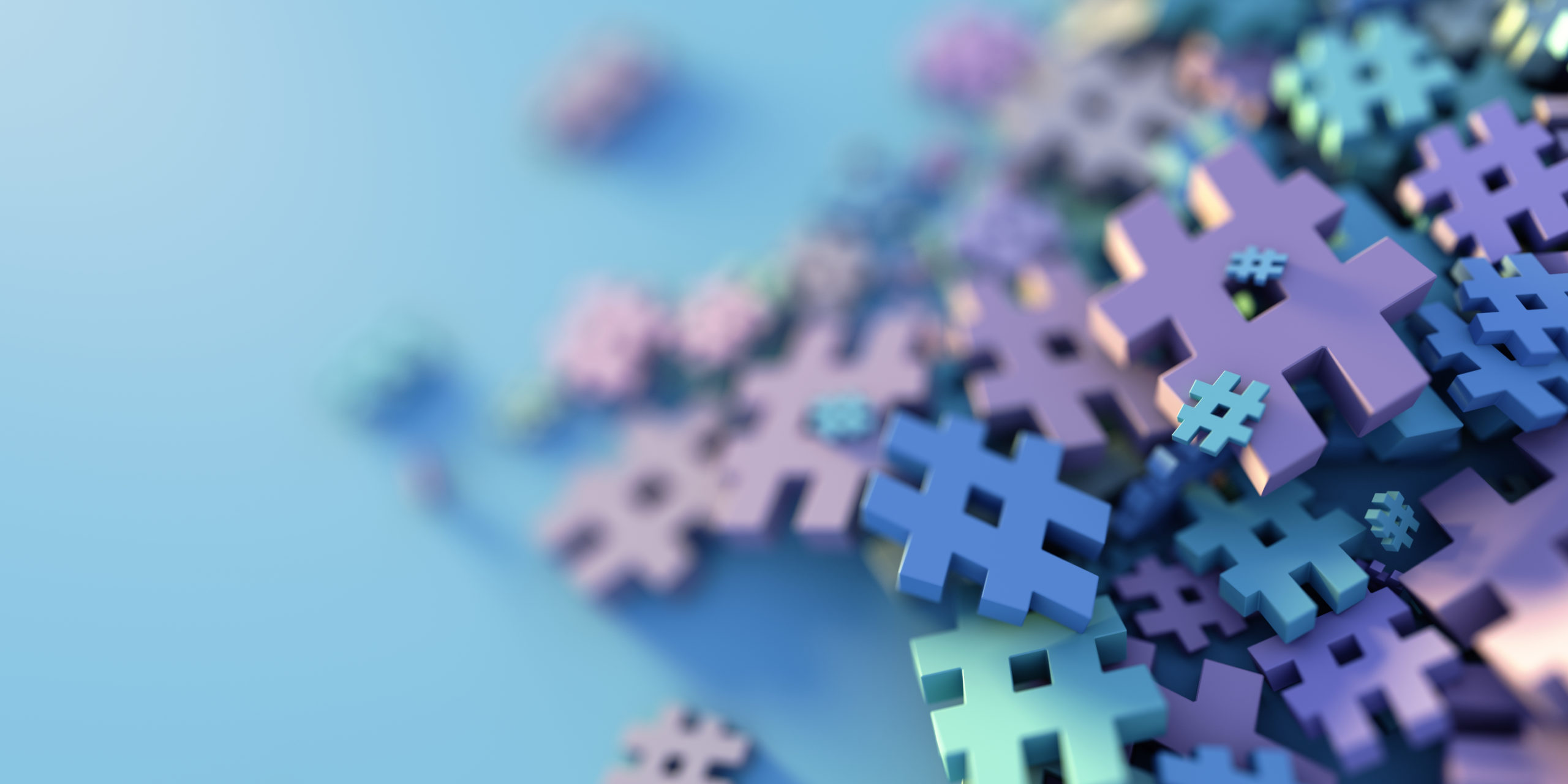 With its widespread use on social networks, mainly on Twitter, the hashtag has become a real communication tool. As a result, there have been a number of trademark registrations with the “#” symbol in the last few years.

The question remains, however, as to whether using a third-party trademark with the “#” sign can be considered trademark use and is therefore likely to be infringing the trademark owner’s rights.

The Oxford dictionary defines the hashtag as “a word or phrase with the symbol ‘#’ in front of it, used on social media websites and apps so that you can search for all messages with the same subject”.

Protection of the Hashtag

The protection offered by trademark law seems to be the most appropriate. However, the registration of a sign preceded by the “#” symbol as a trademark has raised several issues.

It follows from European case law that a sign consisting of the “#” symbol may be registered as a trademark if it otherwise complies with the conditions of trademark law, including distinctiveness.

In this sense, the Court of Justice of the European Union (CJEU) in a decision dated September 12, 2019, clarified, in the context of a preliminary question, that any sign which is the subject of an application for registration as an individual trademark must, in order to be registrable as such, satisfy the condition of being capable of distinguishing the goods or services of one company from those of another company.

The Court also specified that “it cannot a priori be excluded that a sign comprising a hashtag, such as that at issue in the main proceedings, is capable of distinguishing the goods and or services in respect of which registration is sought as coming from a particular undertaking and therefore satisfies the condition referred to above. It is in fact possible that such a sign be presented to the public in relation to goods or services and be capable of performing the essential function of a mark, which is to indicate the commercial origin of the goods or services covered”.

This means that it is down to the national court having jurisdiction to determine whether the relevant public – when reading the sign with the “#” symbol – will interpret the sign as an indication of the commercial origin of the item and not simply as a decorative element or social message.

Henceforth, trademarks with the “#” symbol must be distinctive: in two decisions dated  September 7, 2020, the European Union Intellectual Property Office (EUIPO) raised an objection because it found that the trademarks “#EnAvantFrance” (i.e. Strength France) and “#ForzaItalia” (i.e. Strength Italy), were not eligible for registration. (Refusal of application for a European Union trademark No. 018227955 and No. 018227761, 7 September 2020). The office stated that the sign would simply be perceived by the relevant public as a message to take precautions or to overcome difficulties or challenges.

In a similar way, the EUIPO raised an objection against the sign “#RethinkFashion” as given the purely laudatory information of the sign, the relevant public would be unlikely to see any indication of the commercial origin of the sign (Refusal of application for a European Union trademark No. 018370765, 13 April 2021).

Additionally, the General Court of the European Union in a decision dated September 5, 2019 assimilated the “#” symbol to the exclamation point and the “@” symbol, concluding that not only is it not distinctive, but also that it is not capable of rendering the sign itself distinctive (General Court of the European Union, 5 September 2019, No. T753/18).

The Court explained that this symbol has a communication and advertising function (and sometimes even a decorative function) and that many companies use this symbol for promotional purposes, through competitions or advertising, in order to get more visibility on social networks, in all sectors.

For an application in France, the Intellectual Property National Office (INPI) considered for the comparison of the trademarks “#BOOSTER” and “BOOST” and determined that the word BOOSTER constituted the dominant element of the contested sign. The Office stated that since the “#” symbol does not appear to hold the consumer’s attention, commonly read and pronounced “hashtag” when followed by a term, it only constitutes a metadata marker used on the Internet to mark content with the keyword that follows it, in this case the term BOOSTER.

In another matter brought to the Court of Justice of the European Union, the German Federal Court of Justice (the “FCJ” which had submitted the preliminary question) came to the conclusion that the sign “#darferdas?” (“#mayhedothat?“) may be distinctive for clothing (such as T-shirts). If this sign is used on a label, it may be seen by the public as a reference to the origin of the product. Whereas this is less likely if the sign us used as a decorative element on the front or the rear of a T-shirt (FCJ, 30 January 2020, 1 ZP 61/17 – this is the only case involving a “#” decided by higher German courts until now).

The assessment of the distinctiveness of a trademark with the “#” symbol should thus depend on the specific case and the Office deciding on it.

It is indisputable that the widespread use of hashtags constitutes a turnaround in communication and marketing strategies; a shift that requires lawyers to tweak the standard rules concerning trademark use and infringement.

This is mainly because, contrary to other marketing instruments, the “hashtag tool” is expressly designed not just for one-way communication (from a company to the audience), but rather for involving Internet users in a constant, mutual interaction.

This implies that, on the one hand, as a general principle, the owner of a registered sign (either embodying the “#” symbol, or rather as a classical trademark), should still be entitled to bring an infringement action against the unauthorized use of his/her trademark.

On the other hand, when the reproduction of the trademark associated with a hashtag corresponds to the classic use on social networks, it will be difficult to invoke the trademark’s infringement, unless such use of a third party’s trademark is performed for advertising-commercial purposes.

It is then up to legislators and lawyers to strike a balance between guaranteeing the exclusive rights of trademark owners and safeguarding the users’ freedom of expression on social media.

As known, in the U.S. trademark case-law, the “Bolger test” is frequently applied in order to ascertain whether a given communication constitute a commercial advertisement.

In the EU landscape, scholars and judges are prone to refer to the classical principles of trademark law, such as trademark use, use in the course of trade and infringement of the functions of the trademark. Furthermore, one can also resort to the general criteria of unfair competition, such as passing-off, the parasiting exploitation of a brand’s goodwill, and/or the disparagement of a competitor’s goodwill.

For example, in a decision of the Paris Court of Appeal of June 20, 2017, a company, by promoting its product under the Twitter hashtag #MUMBOX, among other facts, was condemned for acts of unfair and parasitic competition, as the applicant was the owner of the trademark “MUM BOX” (Paris Court of Appeal, 20 June 2017, No. 16/05473).

Similarly, Italian Courts have found that the use of hashtags of a registered trademark may be unlawful if such use is intended to promote and sell products and/or services. See, for reference, the decisions rendered by the District Court of Rome on July 15, 2020 (concerning the use of the “Facile” registered trademarks) and by the District Court of Turin (concerning the “Peyerano” sign, a renowned chocolate brand).

Against this background, it could be useful to refer also to the principles enshrined in the keyword advertising cases. Indeed, the EU Court of Justice has for years pointed out that the use of another’s trademark must in no case “infringe one of the functions of the trade mark” (judgment of 22 September 2011, no. C-323/09, Interflora case), first and foremost that of an indicator of origin. Such a function is “affected if the ad does not enable normally informed and reasonably attentive internet users, or enables them only with difficulty, to ascertain whether the goods or services referred to by the ad originate from the proprietor of the trade mark or an undertaking economically linked to it or, on the contrary, originate from a third party” (judgment of 8 July 2010, no. C-558/08, Portakabin case; in this sense also Milan Court, 23 April 2013).

Thus, the role of hashtags is important for trademark owners, who may have a real interest in registering their trademarks with the “#” symbol when it is possible. Active monitoring of the use of the trademark on social networks is also recommended.

Use of Hashtags for Information Purposes

Despite being counterintuitive, the use of third-party trademarks in combination with hashtags may sometimes not only be lawful, but also strongly recommended.

This occurs, for instance, when an influencer posts content (video, photograph) that features a company’s brand or product, and such content is made and uploaded in the performance of a partnership agreement entered into between the influencer and the same company.

In such a scenario, the explicit mention by the influencer of the brand, preceded by a hashtag plus short warnings such as “#advertising”, “#ad”, “#sponsoredby” might play a disclaiming function, insofar as it informs the public of the advertising nature of the content posted. For this reason, the Italian advertising standards Authority (IAP) has recently included use of hashtags and short disclaimers in its Digital Chart, a set of guidelines and best practices aimed at guaranteeing that online advertising is fair and recognizable.

Clemence Aladjidi Clémence Aladjidi has been working at Advant Altana law firm since January 2022. After a fourth grade in business law (at University Paris 2) and a master’s degree in industrial [...see more]

Pierluigi Dodaro Pierluigi has been working in the Advant Nctm law firm since 2017, providing in and out of Court legal assistance in all fields of industrial property and copyright law, as [...see more]