With Congress and Courts at Standstill, IPWatchdog LIVE 2022 Panel Says Upcoming ‘Action’ on 101 Will Be at USPTO

“Knowles said the senators’ June letter [on patent thickets] is confusing, as it seemingly demonstrates ‘a complete lack of understanding about how law is made.’” 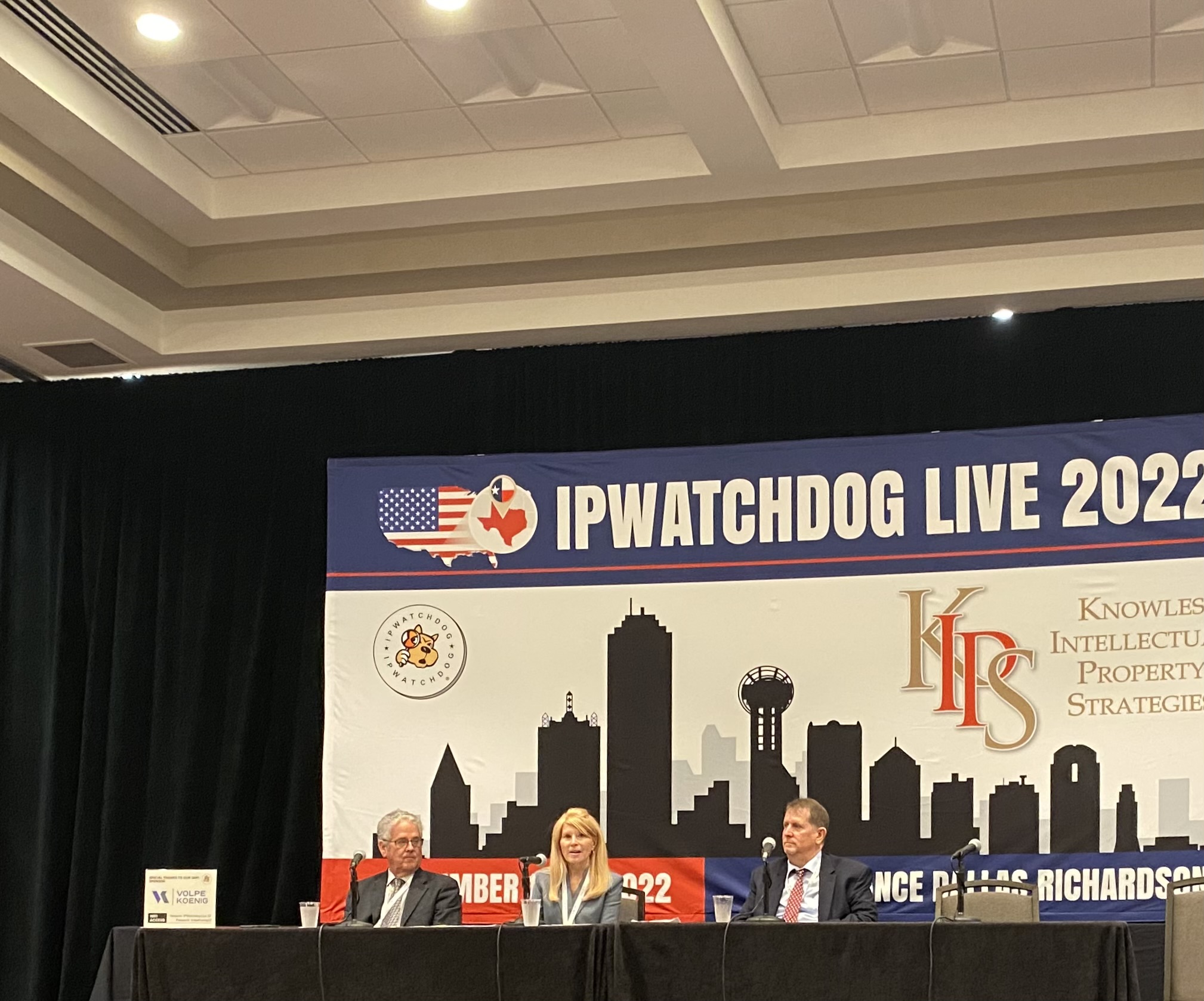 During a session titled “Politics, Policy and Legislation” on Monday at IPWatchdog LIVE 2022, three panelists who have each played a role in shaping patent law over the years discussed recent developments in patent eligibility reform, and congressional interest in so-called patent thickets being fueled by continuation patents and other topics.

On the latter point, Sherry Knowles of Knowles Intellectual Property Strategies recalled the headline-grabbing 2007 case she brought against the U.S. Patent and Trademark Office (USPTO) while in her former role as GlaxoSmithKline (GSK) Chief Patent Counsel to enjoin the Office from promulgating substantive rules concerning claims and continuations practice. In June, Knowles authored an article for IPWatchdog reminding Senators Leahy, Blumenthal, Klobuchar, Cornyn, Collins and Braun, who sent a letter to USPTO Director Kathi Vidal on June 8, that the Office remains under a permanent injunction as a result of the en banc decision from the U.S. Court of Appeals for the Federal Circuit (CAFC) that found in favor of GSK and independent inventor, Triantafyllos Tafas. The senators’ letter asked Vidal to publish a notice of proposed rulemaking or request for comments by September 1, 2022, addressing the issue of patent thickets, particularly in the drug industry. However, the Office has not yet delivered.

Knowles said the senators’ June letter is confusing as it seemingly demonstrates “a complete lack of understanding about how law is made.” She added: “How does Congress not understand that it’s their job to create law in the area of patents and to be the watchdog in this area?”

David Jones of the High-Tech Inventors Alliance (HTIA) addressed the issue of Section 101 reform, in which the HTIA has been actively involved. Jones said that, while he agreed with former USPTO Director Andrei Iancu’s take on a previous panel that every other country has figured out how to get eligibility right and there is a clear path to making Section 101 work, it ultimately doesn’t matter much in cases like American Axle because the result was correct as it was a bad patent in his opinion. Many in the audience and on the panel strongly disagreed with this view, explaining that improperly using a Section 101 analysis to address issues more appropriate for Sections 103 and 112, for instance, creates confusion for all patent owners and practitioners and creates a body of ambiguous law.

While the USPTO has taken steps to make the eligibility analysis easier for examiners through its guidance under former USPTO Director Andrei Iancu and through the “Deferred Subject Matter Eligibility Response (DSMER) pilot program, for instance, the courts remain muddled, said panelists. While some disagreed on whether eligibility rejections are still a problem in prosecution, Bob Stoll of Faegre Drinker, who moderated the panel, and others said at least the tools are there for the Office to avoid granting bad patents without having to rely so heavily on Section 101. However, that doesn’t much matter if the courts simply overturn those decisions. “If you look at the evolution of the European Patent Office, they tool what they used to do on the eligibility side and put it into inventive step—if we did that in the United States there would be a lot less pressure on 101,” Jones suggested.

Stoll next asked the panelists whether Senator Thom Tillis’ “Patent Eligibility Restoration Act,” introduced in August, or other legislation to address Section 101 reform, has any chance of passing in the next five years. Both Knowles and Jones agreed probably not. “Always bet against legislation,” Jones said. Knowles noted that the bill was introduced by Tillis without any cosponsors, which doesn’t bode well. “I’d like to see a cosponsor,” she said. However, Jones said it may be Tillis’ intention to simply set the stage for his agenda for next year by quickly introducing the bill, or to pressure the Supreme Court to finally act so that the bill becomes moot.

Knowles pointed attendees to an article she and her colleague, Anthony Prosser, authored in 2018, titled “Unconstitutional Application of 35 U.S.C. §101 by the U.S. Supreme Court”, 18 J. Marshall Rev. Intell. Prop. L. 144 (2018) that analyzed every iteration of the eligibility statute since 1790. She said the conclusion was that it could not be clearer that the U.S. Supreme Court is unconstitutionally applying the law, because “there are no exceptions” in the statute, and never have been.

With the Court and Congress seemingly stymied, “all the action [on 101] will be at the USPTO,” Jones said.