“While abolishing or overly weakening our current patent system might not lead to the precise situations described above, it is important for all of us to know about the past and be aware of the possible consequences history warns us against.” 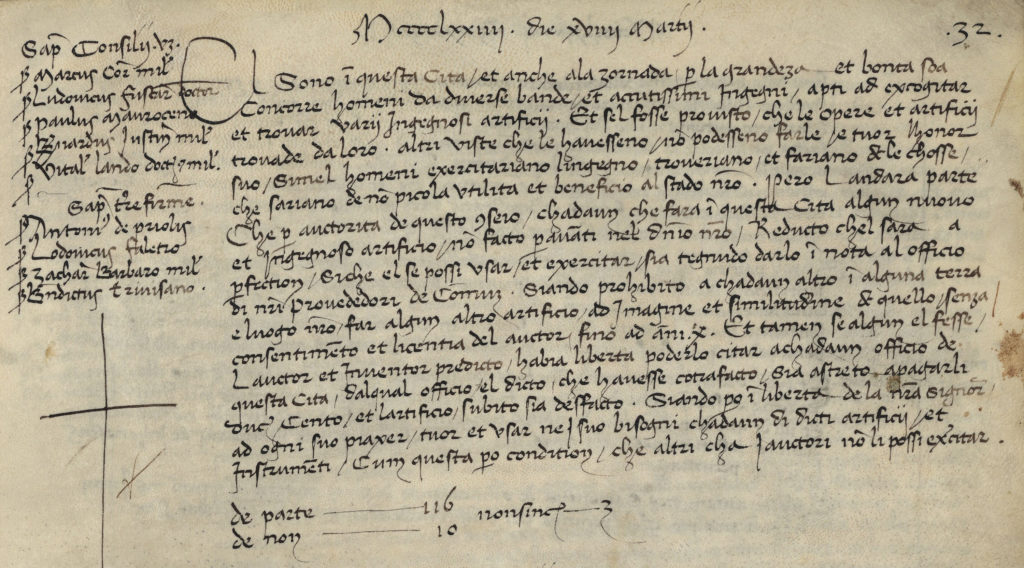 Despite its longevity, the patent system is often criticized. During the pandemic, accusing eyes quickly turned to patents and voices were raised demanding that patents related to COVID-19 be “waived”. This is not an isolated event: some have argued that we would be better off without patents for various reasons in other crises of the past as well. This raises the question of what a world without patents – as we know them today – would be like. As is often the case, history gives us some valuable insight. In this article, we will look specifically at three risks posed by a world without patents in light of real examples from the past.

The Risk of Innovation Being Limited and Kept Secret: Medieval Italy

Before the 14th century, there was nothing like patents, at least on a significant scale. But there was already awareness that technical know-how has some value. To practice a craft such as wool, silk or woodworking, you had to be a member of a guild. Guilds were powerful organizations, especially in the medieval cities of Italy, like Venice. They gathered know-how in the collective hands of their members and protected it through secrecy by means of very strict regulations. Members were not allowed to leave their guilds, and those who did were sentenced to severe sanctions including fines, banishment or even the death penalty. The operation in isolation of the guilds and their cult of secrecy offered a working environment that was not conducive to innovation. And talented individuals working in the guilds lacked incentives to come up with technical improvements, not to mention disruptions.

This example shows that, in some circumstances, the absence of patent protection can lead to self-driven organizations that use coercive means to keep all innovation secret at the expense of society.

The Risk of Economic Sectors Being Privatized in an Arbitrary and Discriminatory Manner: England in the 16th Century

Despite a few isolated cases in the Middle Ages, it was not until the 16th century that European crowns started to grant monopolies over manufacturing to individuals. In England, for example, those monopolies were granted in the form of “letters patents”. The main purpose of letters patents was to attract foreigners to settle in the kingdom, practice their trades and train apprentices: in other words, develop a self-sufficient local industry. In exchange for monopolies on production of certain products, craftsmen had to undertake not to harm employment and existing industries in the kingdom. While letters patents came closer to what we know today as patents, they were still lacking the institutional and judicial environment to make them work properly, since they were granted at the sole discretion of the crown. As a result, at the end of the 16th century, Queen Elizabeth I abused her royal prerogative and granted letters patents covering the sale of all sorts of products, for the sole purpose of rewarding her favorites for their loyalty and filling the state coffers. The resulting monopolies were particularly problematic, as they led to the sudden prohibition of trade in certain common goods, such as salt, vinegar, starch, paper and playing cards.

This example teaches us that, in the absence of a patent system controlled by institutions that include multiple counter-powers, economic sectors may be privatized in an arbitrary and discriminatory manner.

The Risk of Innovation Becoming Overly Specialized:  The Netherlands in the 19th Century

By the end of the 19th century, modern patent systems had spread to many developed countries. In 1869 however, in a context of European economic liberalism hostile to patents, the Netherlands made a unique move by abolishing the patent system that had been in place in the country since 1817. This move was partly justified by the fact that the Dutch economy was much more oriented towards trade than towards industry at the time, such that nearly 90% of Dutch patents were granted to foreign applicants. Cancelling patent rights in the country was therefore seen by the Dutch government as an opportunity to build a local industry through the uncompensated use of technologies developed abroad. An interesting effect of the patent abolition was that it led to an excessive specialization of innovation: inventions quickly tended to focus solely on the few technical fields that could be well enough protected through secrecy, and thus did not require patent protection. This undesirable narrowing of the innovation spectrum certainly played a role in the decision of the Netherlands to reintroduce a patent system in 1912.

We can learn from this example that, in some circumstances, waiving patent rights may orient innovation towards a small subset of technical fields, thereby harming everyone’s ability to freely choose the sectors in which they want to invest and prosper.

These past events and others are described in more detail in my book, Once upon a time, the Patent, and provide real examples of what a world without patents as we know them today could look like. History rarely repeats itself in exactly the same way and our world has changed considerably over the centuries. So, while abolishing or overly weakening our current patent system might not lead to the precise situations described above, it is important for all of us to know about the past and be aware of the possible consequences history warns us against.

Pascal Attali Pascal Attali is the author of the book, ONCE UPON A TIME, THE PATENT: Understanding the past, present and future of protecting inventions. He graduated as an engineer 20 years [...see more]