“The majority of PTAB judges who responded [to the GAO survey] reported feeling pressured ‘to adhere to management comments and to change or modify an aspect of their decision for an [AIA] trial on challenges to the validity of issued patents.’” 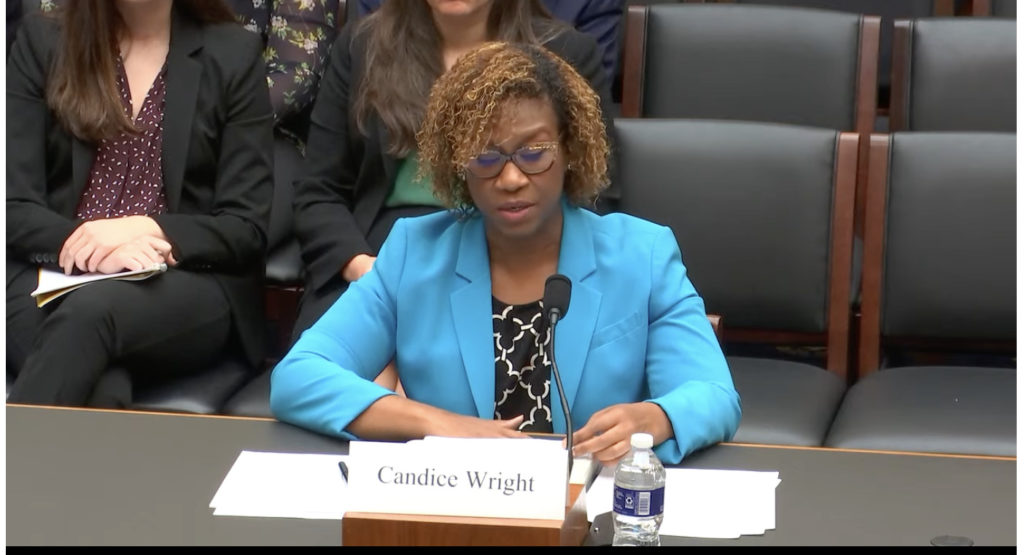 The House Judiciary Committee’s Subcommittee on Courts, Intellectual Property, and the Internet today held Part II in a series of hearings to consider reforms to the Patent Trial and Appeal Board (PTAB) 10 years after it was created by the America Invents Act (AIA). The hearing, titled “The Patent Trial and Appeal Board After 10 Years, Part II: Implications of Adjudicating in an Agency Setting,” coincided with the release of a preliminary report by the U.S. Government Accountability Office (GAO) that was commissioned in June of last year by IP Subcommittee Chair Hank Johnson (D-GA) and Ranking Member Darrell Issa (R-CA) to investigate PTAB decision-making practices. The GAO’s preliminary findings revealed that “the majority of [administrative patent] judges (75 percent) surveyed by GAO responded that the oversight practiced by U.S. Patent and Trademark Office (USPTO) directors and PTAB management has affected their independence, with nearly a quarter citing a large effect on independence.”

According to the report, the GAO surveyed “all 234 non-management and lead PTAB judges and achieved an 87 percent response rate. GAO also interviewed stakeholders—including parties to PTAB proceedings, and current and former judges—and PTAB officials.” The majority of judges who responded reported feeling pressured “to adhere to management comments and to change or modify an aspect of their decision for an America Invents Act (AIA) trial on challenges to the validity of issued patents.” In his opening remarks at today’s hearing, Issa said these preliminary results warrant potentially reversing or setting aside decisions made under the last USPTO administration. Issa explained:

“We [asked for the GAO investigation] because we had allegations but not substantiation. In looking at the preliminary report I find the GAO’s investigation to be disturbing – they indicate that bureaucrats in the agency leadership, led by the Director himself, have improperly influenced or altered decisions by PTAB judges in secret without transparency and, in my opinion, without due process…. In those cases, the parties involved had no idea the Director was meddling in their case…. We have a process for making rules – those rules are subject to review by Congress…. As we go through the GAO study, it is likely we’ll speak to the new director about reversing some of these or setting them aside simply because they violated the current law on rulemaking.” 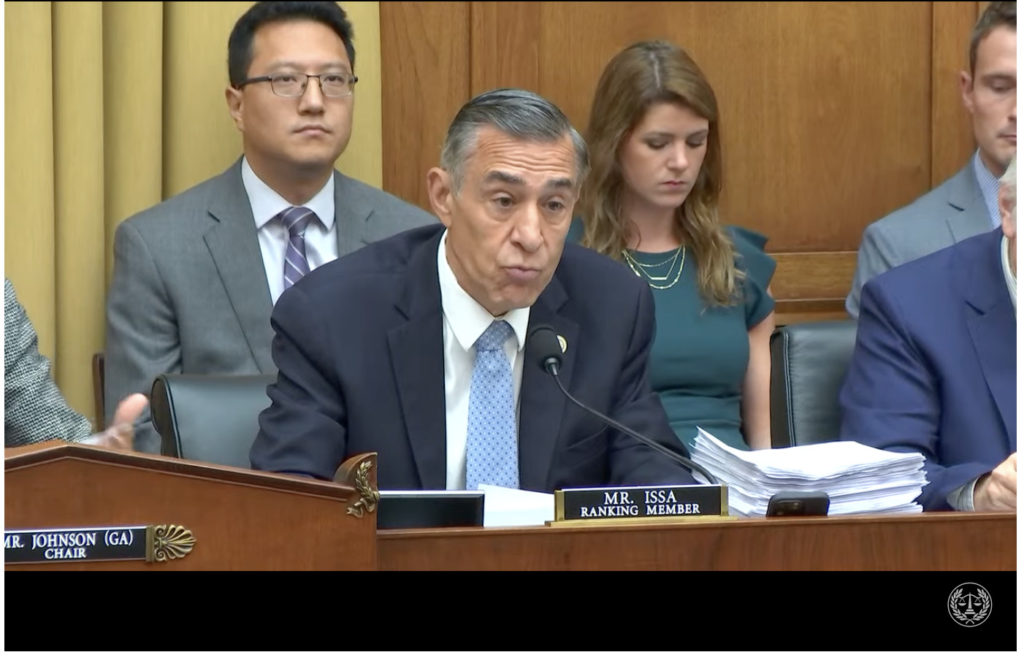 Issa presented a large stack of “just some” of the decisions he believes were improperly made.

One of the witnesses at the hearing was Candice Wright, Director, Science, Technology Assessment, and Analytics Team, U.S. Government Accountability Office, who presented the GAO’s preliminary findings. She said that while “oversight typically did not influence the merits of the case…there can be pressure on discretionary areas driven by agency policy or guidance.” Wright added that even for judges whose cases were not subject to management oversight, stories about other judges who had been could have a “preemptive chilling effect” on judicial independence, although she later stated that none of the judges interviewed admitted to actually changing their decisions due to these influences. 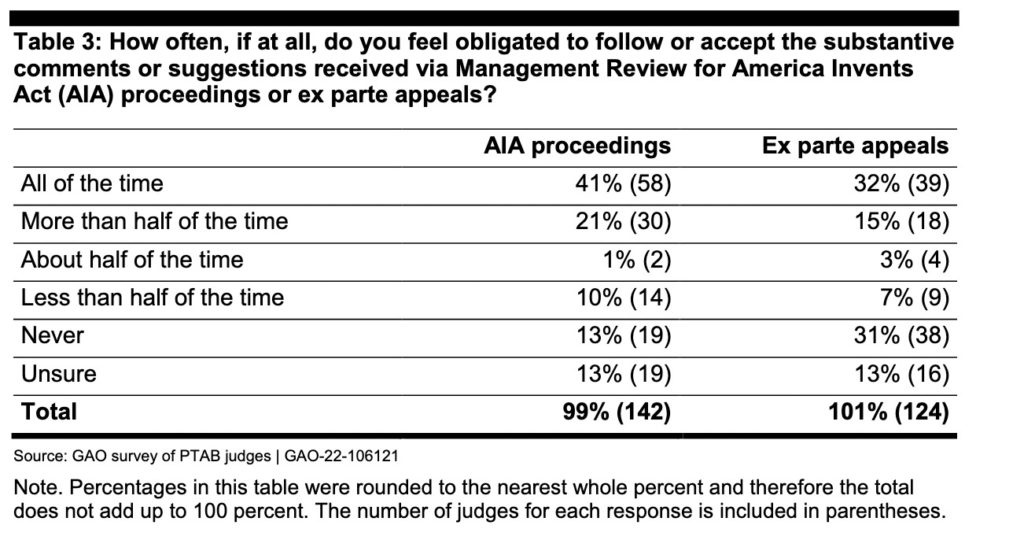 The report also indicated that judges felt “director-created policy and guidance had an effect on their ability to decide cases independently.” As an example, some judges interviewed thought former USPTO Director Andrei Iancu’s guidance on subject matter eligibility “was inconsistent with relevant case law.” The report explained:

“Sixty judges (30 percent) we surveyed responded that, in their opinion, the PTAB 2019 Revised Patent Subject Matter Eligibility Guidance creates new tests for evaluating whether an invention is eligible that are not supported or established by the applicable case law. Sixty-three judges (31 percent) responded that it did not create new tests and 80 judges (39 percent) had no opinion. One judge stated that, ‘the guidance memos from the director, the precedential decisions, the Management Review process, and the AIA review process significantly limit the panel to write as we see fit. We are obliged to follow the guidance memos as if they are applicable law,’ while another judge stated that ‘Management Review is by far the most significant factor’ affecting their independence.”

As to the external stakeholders the GAO interviewed, they were generally unaware of director/ management oversight processes and expressed concerns about transparency. Wright also noted USPTO Director Kathi Vidal’s recent interim update to PTAB decision circulation and internal review processes, which she said was “a good step forward to address the concerns of judges and stakeholders.” 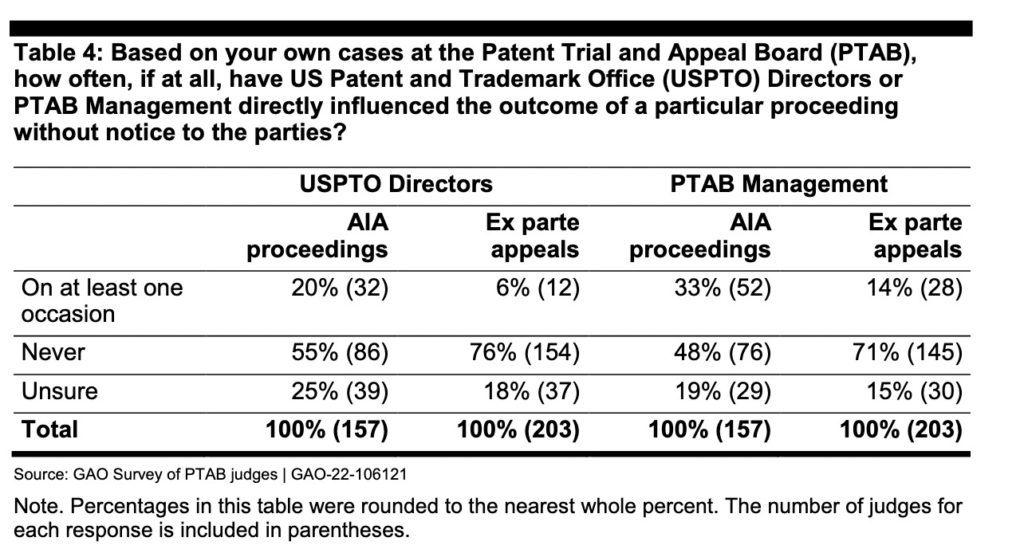 Witnesses: How We Got Here and What to Do

The other witnesses at today’s hearing were Richard Torczon, Senior Counsel, Wilson Sonsini Goodrich & Rosati, who formelrly servied as an APJ; James Donald Smith, Chief Intellectual Property Counsel, Ecolab, who served as the first Chief Judge of the PTAB and as former Board of Patent Appeals and Interferences (BPAI) Chief Judge; and Michael Asimow, Deans Executive Professor of Law, Santa Clara University School of Law. 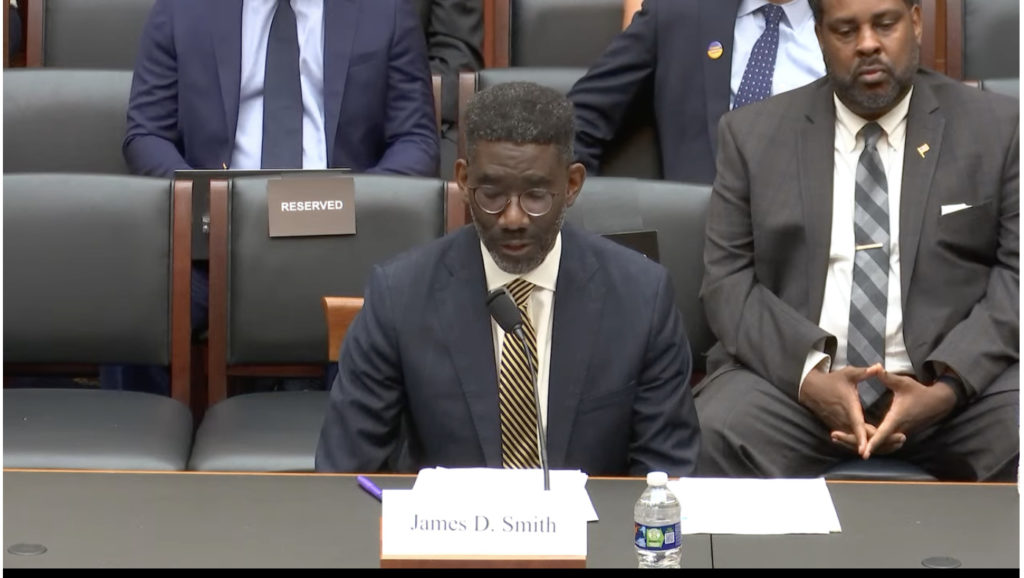 Smith explained how the transition to the PTAB overwhelmed the 90 APJs at the time, who were tasked with reducing a backlog of 27,000 appeals carried over from the BPAI on top of 1,500 new trials each year—a number nearly four times the estimated 400 new trials anticipated during AIA passage. As a result, former USPTO Director David Kappos managed to get permission to expand the PTAB judges by 150 APJs. During the hiring process, Smith said the one question every candidate was asked was what they would do if the USPTO Director or other official pressured them to change their opinion in a case they were working on due to political considerations. “Every one of the judges who we advanced for nomination answered that question only one way,” Smith said. “[They responded] ‘we will ask whoever is asking us to change our decision to leave because we believe in judicial independence and due process and the Director has other means, including through rehearing, for the case to be reviewed.’ All of the candidates who said they would do whatever the Director told them to do were not advanced.”

Asimow commented that all of the PTAB’s problems arise from the “defective structure of the PTAB when created,” specifically that there was no clear appellate review structure. He later suggested that one legislative fix could be to consider a tribunal similar to that of the Tax Court, which exists independently of the Internal Revenue Service (IRS), for example. This would be “an independent adjudicating entity in which the Director could become a party and could appear on the side of either litigant, but otherwise would not be controlled by the PTO at all,” he explained.

As a former APJ, Torczon told the Subcommittee members in response to questions about why existing prohibitions on ex parte communications with APJ panel members did not seem to be working that, “as the person who drafted the rule in question, I can assure you that it has never been viewed as having internal application.” Torczon said that, while the number of cases in which such interference takes place is relatively small, “it’s a real problem where it is happening, and it has a chilling effect.” He provided an example from his own experience at the Office in which he said one of the judges on a panel he was part of was a management official and, after indicating that he would dissent, “the next thing I knew the case was handed to another panel.” Torczon said the problems at the USPTO are ultimately ones of “culture” and that “a culture reset” via legislative intervention is necessary.

For his part, Smith disagreed with Torczon that the ex parte communications prohibition did not apply internally, and said that the creation of bodies such as the AIA Review Committee (ARC) was not meant to be an ex parte communication or interference by judges into a case, but rather was intended “to drive uniformity in the written output of the Board.” 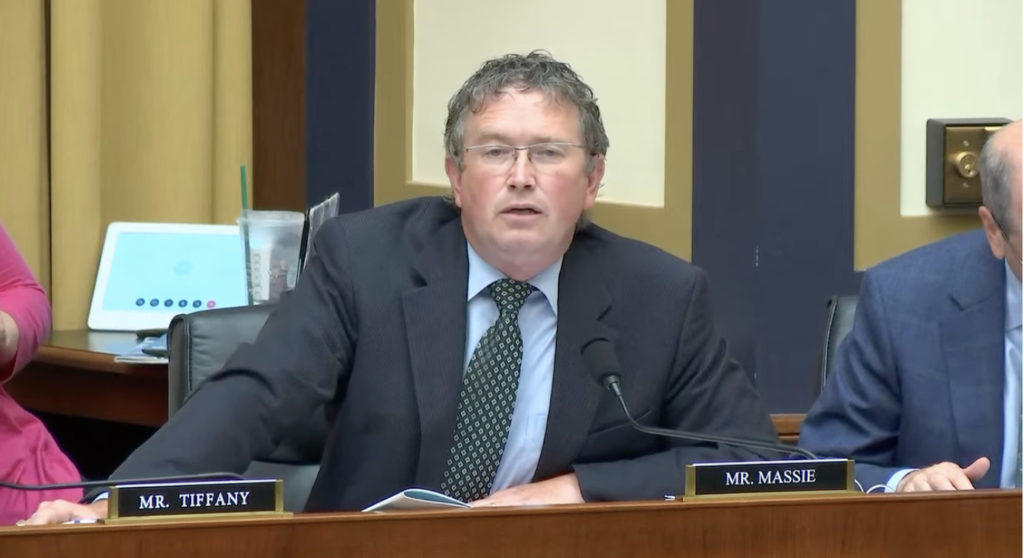 Representative Thomas Massie (R-KY) continued to advocate for eradicating the PTAB altogether, suggesting that if he had been around for the AIA hearings, he might have introduced an amendment to rename the AIA “’the Seventh Amendment Repeal Act’ because this thing that’s in our Constitution that’s a right to a jury trial has been suspended by the AIA.” Massie said that as long as the PTAB remains in place, Congress will continue to meet every four years wondering why the system is corrupt and how independence was lost:

“It seems like we’re struggling with this problem because we took something that belongs in the judicial branch and stuck it in the most political branch there is…. Congress is very political, but at least there’s some Republicans and some Democrats at all times…. All of these problems get solved if you do one thing—put it back the way it was. Otherwise, we can patch this PTAB up, but we’re gonna be here in four more years wondering how the system got corrupted, how independence was lost, and why inventors are getting messed over and they have no way to appeal it.”

Massie introduced the Restoring America’s Leadership in Innovation Act of 2021 last year, which would in part repeal the PTAB, return the patent system to a “first-to-invent” model, rather than first-to-file, and would end automatic publication of patents. To support his views Massie introduced several articles for the record, including two IPWatchdog posts: “How Google and Big Tech Killed the U.S. Patent System” and “USPTO Response to FOIA Confirms There are No Rules of Judicial Conduct for PTAB Judges.”

But Issa repeatedly hit back at Massie throughout the hearing on his assertion that going back to the old system would be any better. “Yes, we might be here again in four years, but this is a process that has evolved because of past problems,” Issa said in his closing remarks.

However, all of those present seemed to agree that some legislative solution was necessary to ensure transparency and judicial independence at the Office, particularly in light of the GAO’s preliminary findings. The GAO’s report did not yet make any recommendations, but Wright said the final report would include specific suggestions for the USPTO and that they would also be reviewing the new interim processes for Director and PTAB review to examine whether they may still leave any opportunity for the Director or management to influence decisions.