“‘The decision below…muddies the written description requirement, creating uncertainty about the information that a patent must disclose to support a claim to a human therapeutic method.” – Amicus Brief of PhRMA and BIO 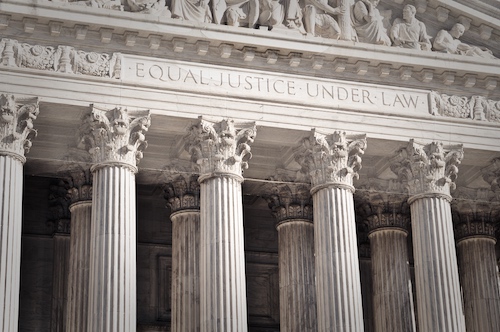 Last week, the U.S. Supreme Court received several amicus briefs filed in support of the petition for writ of certiorari filed in Biogen International GmbH v. Mylan Pharmaceuticals Inc. If cert is granted, this case will ask the nation’s highest court to clarify the written description requirement under 35 U.S.C. § 112. The appeal follows a contentious decision this March from the U.S. Court of Appeals for the Federal Circuit to deny panel rehearing and rehearing en banc of an earlier ruling affirming the Northern District of West Virginia’s invalidation of Biogen’s patent claims covering a method of treating multiple sclerosis (MS) under Section 112.

Dissenting from the Federal Circuit’s rehearing denial were Chief Judge Kimberly Moore and Circuit Judges Alan Lourie and Pauline Newman, who argued that Biogen’s written description disclosed every claim limitation in the patent. The dissent contended that the rest of the Federal Circuit introduced extraneous considerations into the Section 112 written description analysis, including “blaze marks” pointing a person of ordinary skill in the art to the claimed species within a disclosed genus of invention, as well as a lack of clinical data despite the fact that the written description analysis is directed at therapeutic efficacy.

The question presented by Biogen’s petition is as follows:

Biogen’s petition argues that the Federal Circuit’s holding conflicts with the text and purpose of Section 112 as well as long-standing precedent at the Supreme Court. Leaving the Federal Circuit’s ruling intact threatens innovation, especially in the pharmaceutical sector where delays to gather clinical data can risk triggering the one-year time bar for public disclosures under either 35 U.S.C. § 102 or 35 U.S.C. § 103. Further, Biogen’s petition notes that the internal division within the Federal Circuit on the application of Section 112’s written description requirement creates a substantial risk of inconsistent and panel-dependent decisions.

In its amicus brief filed on July 11, the Chemistry and the Law Division (CHAL) of the American Chemical Society notes that the issues present in Biogen’s appeal are of great importance to CHAL’s more than 2,000 members, many of which are patent attorneys representing pharmaceutical firms and would benefit from consistent requirements for drafting and defending patents under Section 112.

CHAL argues that Biogen’s invalidated patent discloses the oral administration of dimethyl fumarate (DMF) at a therapeutically effective daily dose of 480 milligrams (DMF480). The patent specification’s disclosure of DMF480 distinguishes the present appeal from Ariad Pharmaceuticals v. Eli Lilly & Co. (2010), a ruling upon which the Federal Circuit relied heavily in affirming the invalidation of Biogen’s patent. In Ariad, the Federal Circuit invalidated patent claims to a functional result because the written description did not disclose any compounds achieving that result.

Brief of New England Legal Foundation in Support of Biogen

In its amicus brief filed July 14, the New England Legal Foundation (NELF) noted that the issues presented on appeal are of great importance to the biotechnology and health care industries well established in the New England region. According to NELF, the Federal Circuit’s ruling improperly conflates at least the enablement and written description analyses under Section 112:

“Even though the specification showed that the Biogen inventors ‘possessed’ the DMF480 dose, the Federal Circuit majority endorsed the district court’s holding that the written description requirement required Biogen to prove the ‘efficacy’ of the claimed dose in the patent specification (in other words, an enablement requirement).”

NELF’s brief contends that the Federal Circuit’s ruling conflates the best mode requirement of Section 112, which is no longer a ground under which a patent may be invalidated since passage of the America Invents Act (AIA), by requiring the identification of DMF480 as the “preferred” or “most effective” dose of the MS treatment. NELF also argued that the underlying decisions arguably conflate Section 103 obviousness by failing to differentiate the specification’s recitation of “therapeutic effects” from Biogen’s nonobviousness contentions, as well as 35 U.S.C. § 101’s utility requirement by requiring proof of the efficacy of the DMF480 therapeutic dose.

Highlighting the separation of these distinct Section 112 requirement, according to NELF, is a 1967 decision by the Federal Circuit’s predecessor court, the U.S. Court of Customs and Patent Appeals (CCPA). In In re Ruschig, the CCPA invalidated a patent claim covering the use of chlorpropamide to treat diabetes mellitus added to the patent application after it was originally filed. While Ruschig argued that the claim’s subject matter was properly enabled because the specification disclosed reagents for the preparation of chlorpropamide, the CCPA found that the specification did not disclose a particular selection of reagents that conveyed to those skilled in the art that Ruschig invented the claimed compound.

Conflation is not just a problem in the realm of Section 112 analysis, and NELF points out the Federal Circuit’s expansion of Section 101 ineligibility for natural laws in American Axle & Manufacturing v. Neapco Holdings as a significant example. Granting cert in Biogen’s appeal would allow the Supreme Court to address this conflation trend, NELF argues.

Brief of PhRMA and BIO in Support of Biogen

On July 15, the Pharmaceutical Research and Manufacturers of America (PhRMA) and the Biotechnology Innovation Organization (BIO) jointly filed an amicus brief arguing that the Federal Circuit’s formulation of the written description requirement, including the need to show human clinical evidence proving the efficacy of a claimed therapeutic method, would make it nearly impossible to obtain patent protection for new methods of treatment.

PhRMA and BIO supported the points raised by Judge Lourie in his dissent from the Federal Circuit’s rehearing denial, agreeing that, prior to Biogen, Section 112’s written description requirement was never construed to require clinical data for patent’s claiming a human therapy. The pharmaceutical industry trade groups joined the chorus of amici voices concerned about the effects of the Federal Circuit’s ruling in creating uncertainty regarding the written description requirement:

“‘Description’ means ‘description,’ not demonstrated proof that the inventor has actually made a product or service embodying the invention, much less one that is ready to be commercially marketed… The decision below thus muddies the written description requirement, creating uncertainty about the information that a patent must disclose to support a claim to a human therapeutic method.”

The pharmaceutical industry groups point out that the process most companies face between discovering a new human therapy and obtaining the clinical trial data required for U.S. Food and Drug Administration (FDA) approval is highly uncertain. Fewer than one out of every five medical products entering clinical trials experience successful trials leading to FDA approval, and Federal Circuit and CCPA case law stemming back to the early 1960s reflects recognition by courts that patent applicants claiming human therapies have not been required to submit clinical data. Further, such clinical data is required to be published, creating a public disclosure that could invalidate a later filed patent application.

From a policy standpoint, PhRMA and BIO note that prompt early disclosures of inventions to benefit society at large is a central purpose of the patent system. The Federal Circuit’s written description standard requires patent applicants to delay their filings until clinical data is obtained, arguably frustrating this purpose. Finally, PhRMA and BIO contend that the underlying decision threatens incentives to creating new human therapies despite the fact that events in recent years, especially the COVID-19 pandemic, have shown that more incentives to address unmet medical needs are needed to encourage the rapid discovery and development of new therapeutics.