“Interactive points to Federal Circuit case law that illustrates a ‘wide disparity’ among various panels in terms of how the court has treated the relationship between Section 101 and Section 112, ‘leading to unpredictable and inconsistent application of the law.’” 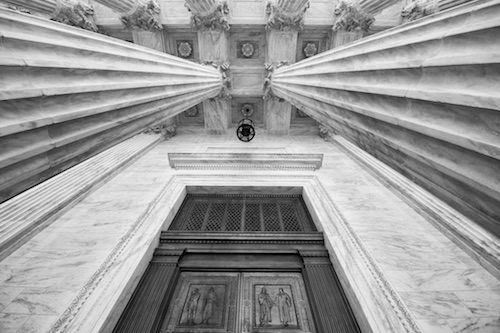 Interactive Wearables, the petitioner in yet another patent eligibility case that the U.S. Supreme Court is being asked to review, filed a reply brief on July 11 distancing its petition from that of American Axle & Manufacturing, Inc.’s, which was denied certiorari on June 30, 2022.

The brief characterizes U.S. patent eligibility doctrine as being “perilously fractured” and narrows its arguments to focus on the third question presented in its petition, since the first two were addressed, and have now been rejected by the Court, in the American Axle case.

A group of patent practitioners told the Supreme Court in April that the case, which involves a patent for a type of content player, would be a better vehicle for unraveling the patent eligibility problem than American Axle.

The district court in Interactive Wearables held that the relevant claims for Interactive’s patent covering “improved devices for playing audio and visual media content, such as cellphones, radios, and wearable devices,” are directed to the abstract idea of “providing information in conjunction with media content, ‘applied to the context’ of content players.”

The court said that the claims “merely apply the abstract idea behind consulting a TV Guide—i.e., ‘to obtain more information’ about a program while viewing it—to a content player, rather than ‘provide[] a technological improvement’ to the content player itself.”

The Federal Circuit summarily affirmed the district court’s decision under Rule 36, without explanation, and denied Interactive’s petition for rehearing or rehearing en banc in December 2021.

In its reply brief this week, Interactive Wearables said the claims at issue in its case “starkly highlight how far the Federal Circuit’s patent eligibility analysis has ventured into the realm of enablement.” This is because the district court looked to the specification to determine that the claims at issue were abstract instead of focusing on the claim language itself. The brief explains:

The district court indicated in its decision that the physical components of the invention were not sufficient to justify eligibility because “[n]othing else is described in the specification as the invention” and the “specification fails to provide any technical details for the tangible components,” says the brief.

Despite Polar’s arguments that the question isn’t implicated because “[because] [n]o one—neither Petitioner nor Polar, not the district court or the Federal Circuit—contends that Section 112 considerations should inform the Section 101 inquiry,” Interactive points to Federal Circuit case law that illustrates a “wide disparity” among various panels in terms of how the court has treated the relationship between Section 101 and Section 112, “leading to unpredictable and inconsistent application of the law.”

In Visual Memory LLC v. NVIDIA Corp., 867 F.3d 1253, 1261 (Fed. Cir. 2017), for example, the panel explained that “whether the ‘specification teaches an ordinarily skilled artisan how to implement the claimed invention presents an issue under 35 U.S.C. § 112, not an eligibility issue.’” But in the present case and several others cited in Interactive’s petition, panels have looked to the specification to determine what the claims are directed to, rather than centering the analysis on the face of the claims themselves. Polar pointed to ChargePoint Inc. v. SemaConnect, Inc., 920 F.3d 759 (Fed. Cir. 2019)) to support the analysis conducted by the district court in this case, but Interactive distinguished its case, saying that the court in Chargepoint “began its inquiry of what the claims are ‘directed to’ by first “turn[ing] to the claims at issue,” whereas the court here jumped straight to the specification “for statements about the goals of the inventions, to determine what the claim was directed to.”

Ultimately, Interactive’s reply brief argues that this third question is “an important and recurring issue” that warrants review, pointing to at least four petitions to the court in the last year raising the same concerns:

Regardless of the ultimate success of those petitions, the fact remains that they each raised the same issue as in this petition, and the question keeps making its way to this Court…. The question of whether courts can substitute the Section 101 inquiry with a quasi-enablement inquiry, as the district court did here, keeps winding up before this Court because the Federal Circuit keeps misapplying this Court’s jurisprudence on the judicial exceptions to Section 101. Until this Court provides further guidance to the lower courts, the issue seems poised to repeatedly resurface.

The case was yesterday distributed for the conference of September 28, 2022.