Show us your watchdogs!!! Submit your favorite pup to be the next Barks and Bites-featured Watchdog. Read more here. 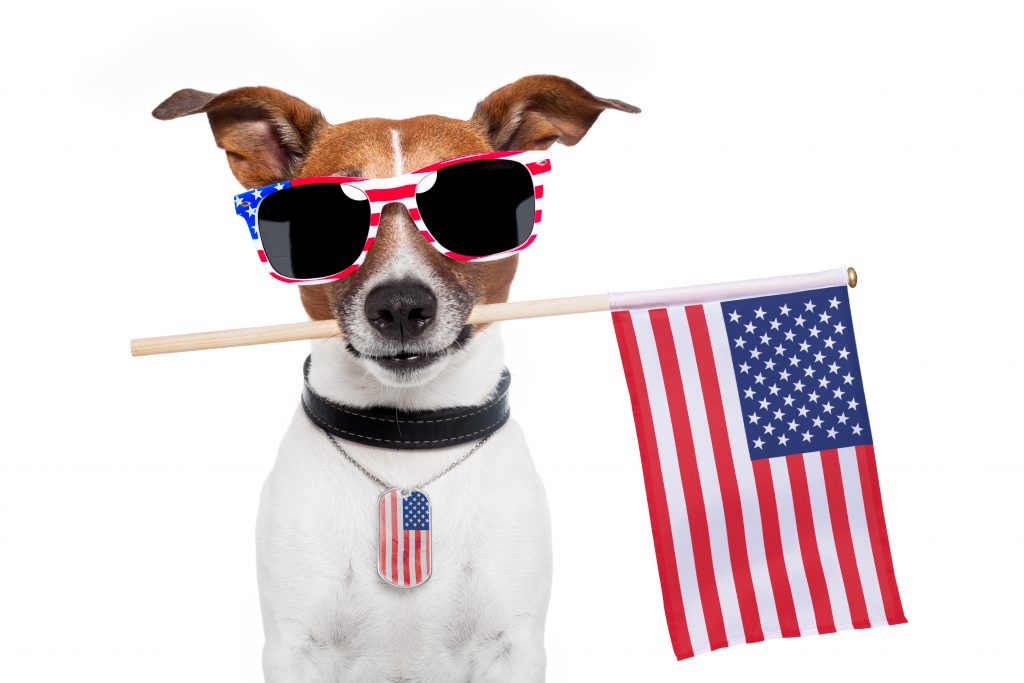 This week in Other Barks & Bites: the Eleventh Circuit overturns a summary judgment ruling against Wreal while clarifying the application of the likelihood of confusion factors in reverse infringement cases; the Supreme Court denies the petition for writ of certiorari in American Axle v. Neapco; the European Union creates its first regulatory framework for cryptocurrencies and digital assets; Senators Thom Tillis and Steve Daines ask Google CEO Sundar Pichai about the potential that spam filters are censoring political emails; the U.S. Patent and Trademark Office (USPTO) will begin mandating identity verification for parties filing certain kinds of electronic trademark forms with the agency with the goal of stopping Trademark Terminal and other well-known trademark scams; INTA asks the Second Circuit to clarify the definition of “expressive works” for applications of the Rogers test; the Third Circuit overturns a preliminary injunction after finding no valid copyright ownership over a fireworks communications protocol; and the FCC approves SpaceX’s application to offer commercial Internet services to boats, airplanes and automobiles through its Starlink satellite Internet system.

Creative Rights Caucus Co-Chairs Announced – On Friday, July 1,  Senator Thom Tillis (R-NC) announced he will serve as the new Senate Co-Chair of the Creative Rights Caucus alongside Senator Mazie Hirono (D-HI) in the Senate and U.S. Representatives Drew Ferguson (R-GA) and Judy Chu (D-CA) in the House. The Creative Rights Caucus “educates Members of Congress and the public about the importance of preserving and protecting the rights of the creative community in the United States.” Its focus is on creators of motion pictures, music, software, and other creative works.

SCOTUS Denies Section 101 Petitions, Kicking Subject Matter Problem to Congress – On Thursday, June 30, the U.S. Supreme Court issued an order list denying petitions for writ of certiorari in a pair of patent cases regarding 35 U.S.C. § 101 subject matter eligibility, including American Axle v. Neapco Holdings which has been a controversial decision in the patent community as it greatly expands the Section 101 eligibility beyond software and medical diagnostics. The denial comes despite the U.S. Solicitor General’s brief in May that recommended the Supreme Court to grant American Axle’s petition.

USPTO Will Mandate Identity Verification to Stop Trademark Scam Entities– On Thursday, June 30, the U.S. Patent and Trademark Office announced in a blog post penned by Director Kathi Vidal and Commissioner for Trademarks David Gooder that on August 6 of this year, the USPTO will begin mandating identity verification for parties filing certain kinds of electronic trademark forms with the agency with the goal of stopping Trademark Terminal and other well-known trademark scams.

No Evidence of Lost Sales Leads CAFC to Overturn Coca-Cola’s TTAB Win – On Wednesday, June 29, the U.S. Court of Appeals for the Federal Circuit issued a precedential decision in Meenaxi Enterprise, Inc. v. The Coca-Cola Co. in which the appellate court reversed a ruling by the Trademark Trial and Appeal Board (TTAB) finding standing for Coca-Cola’s petition to cancel Meenaxi trademarks covering brands of soda popular in India and sold to American distributors. The Federal Circuit panel majority found that Coca-Cola did not provide evidence of lost sales due to limited sales of its Limca and Thums Up branded sodas, while Circuit Judge Jimmie Reyna authored a dissent arguing that territoriality principles apply, which would have led to reversal as Coca-Cola did not claim that its trademarks met the well-known marks exception to territoriality.

Third Circuit Finds No Copyright in Firework Communications Protocol – On Wednesday, June 29, the U.S. Court of Appeals for the Third Circuit issued a decision in Pyrotechnics Management, LLC v. XFX Pyrotechnics LLC in which the appellate court reversed the district court’s entry of a preliminary injunction after finding that Pyrotechnics Management owned no copyright to the digital message format and individual messages used by the company’s firework communication protocol and allegedly infringed upon by XFX.

USPTO Subject Matter Eligibility Report Shows Split Between Big Tech and Startups – On Tuesday, June 28, the U.S. Patent and Trademark Office issued a report reflecting public comments received by the agency in response to a March 2021 request by a bipartisan collection of Senators seeking information on how cases like Alice and Mayo have been impacting innovation in critical technologies dealing heavily with Section 101 issues. The comments reflected that many entities connected to major high tech firms like the current state of U.S. patent eligibility law while smaller businesses, especially those in life sciences, think that the current state of patent eligibility law is very damaging to their business prospects.

Eleventh Circuit Clarifies Likelihood of Confusion Test for Reverse Confusion Cases – On Tuesday, June 28, the U.S. Court of Appeals for the Eleventh Circuit issued a decision in Wreal, LLC v. Amazon.com, Inc. in which the appellate court reversed the district court’s summary judgment ruling dismissing trademark infringement claims by adult film company Wreal, which has used “FyreTV” as a mark since 2008, against Amazon.com, which introduced its “Fire TV” service in 2012. The Eleventh Circuit found that the district court did not properly apply the seven likelihood of confusion factors to Wreal’s claims of reverse trademark infringement and clarified how those factors should be assessed in reverse infringement cases.

CAFC Says Joint Defense Strategy Did Not Violate Protective Order Over Reyna Dissent – On Tuesday, June 28, the Federal Circuit issued a precedential decision in Static Media LLC v. Leader Accessories LLC in which the appellate court reversed a ruling from the Western District of Wisconsin holding Leader and its attorney in contempt for violating a protective order in the patent case filed by Static Media by developing a joint defense strategy with another company targeted by Static with patent infringement allegations. Circuit Judge Jimmie Reyna dissented from the majority, finding that the disclosure of confidential info itself violated the protective order despite the order’s provision for disclosure of such info to outside persons under the terms of a written agreement assuring that the info wouldn’t be improperly used.

INTA Asks Second Circuit to Define “Expressive Work” for Proper Applications of Rogers Test – On Friday, June 24, the International Trademark Association (INTA) filed an amicus brief with the U.S. Court of Appeals for the Second Circuit in Vans, Inc. v. MSCHF Product Studio, Inc. in which INTA asked the Second Circuit to render a decision that provides a clearer definition of the term “expressive work” for the purposes of making it more clear to district courts and litigants alike that applications of Rogers are limited to artistic and expressive works and not ordinary consumer products.

EPO Announces PPH Fast Track Pilot Programs With Australia, Saudi Arabia – On Friday, July 1, the European Patent Office (EPO) announced that it was making permanent its Patent Prosecution Highway (PPH) fast track examination program with IP Australia, which the two agencies launched in July 2016. The EPO also announced that it had established a pilot PPH program with the Saudi Authority for Intellectual Property for accelerating patent examination in both countries.

Copyright Office Report Finds Challenges of Funding Journalism Not Copyright-Specific – On Thursday, June 30, the U.S. Copyright Office published a study requested by a bipartisan collection of U.S. Senators into the viability of additional protections for news publishers under copyright law. The report found significant existing protections for news publishers and found that, while funding for journalism faces risks in the Internet era, the answers to those challenges are not specific to copyright law.

CRB Authorizes Use of Proxy Reporting Data for Unmatched Royalty Distributions – On Thursday, June 30, the Copyright Royalty Board published a final rule in the Federal Register authorizing the use of proxy reporting data by SoundExchange, Inc., the collective responsible for distributing royalties for statutory licenses under 17 U.S.C. § 112 and 17 U.S.C. § 114, for the distribution of unmatched royalties deposited with SoundExchange between the years 2010 and 2018.

USPTO’s Patent Center to Fully Replace Public PAIR by Beginning of August – On Wednesday, June 29, the U.S. Patent and Trademark Office announced that the agency’s legacy Public Patent Application Information Retrieval (Public PAIR) tool for electronic management of patent applications will be fully replaced by the USPTO’s Patent Center, which has been available to the public since 2017, on August 1 of this year.

Campinos Appointed to Serve Another Five-Year Term as EPO President – On Wednesday, June 29, the European Patent Office (EPO) announced that the member states of the EPO voted to appoint António Campinos to serve a second five-year term as President of the EPO which will begin on July 1, 2023.

Skechers Files Trademark Suit Against Brooks Sports’ Stylized “5” Shoe Design – On Tuesday, June 28, footwear designer Skechers filed a lawsuit in the Central District of California alleging claims of trademark infringement against Brooks Sports over a stylized “5” incorporated into the design of its running shoes, which Skechers alleges creates consumer confusion with its own stylized “S” sneaker design.

Chip Shortage Keeps GM From Shipping 95,000 Autos During Q2 2022 – On Friday, July 1, General Motors issued guidance acknowledging that a lack of semiconductors and other components prevented the company from shipping 95,000 vehicles, which is expected to drop revenues for the second quarter as low as $1.6 billion from previous expectations of $2.46 billion, although the company still plans to meet its earlier guidance on profits and vehicle production for the 2022 fiscal year.

EU Member States Agree to First Regulatory Framework for Crypto Assets – On Thursday, June 30, officials from the European Union announced that lawmakers from member states of the EU had worked out an agreement on a new law called Markets in Crypto-Assets (MiCA), the first ever regulatory framework for cryptocurrency and digital asset regulation by the EU and which will require vendors of stablecoins to maintain significant assets to meet redemption requests if a large number of withdrawals are requested.

FCC Authorizes SpaceX’s Starlink Internet Service for Moving Vehicles – On Thursday, June 30, officials from the Federal Communications Commission announced that the agency authorized SpaceX’s Starlink satellite Internet service to reach customer terminals that are on airplanes, boating vessels and certain types of automobiles, which is expected to greatly expand Starlink’s customer base from the 400,000 subscribers it had as of May.