“If you don’t like the compromise we’ve come up with, tell us – but don’t just tell us you hate it. Give us ideas.”- Senator Tillis 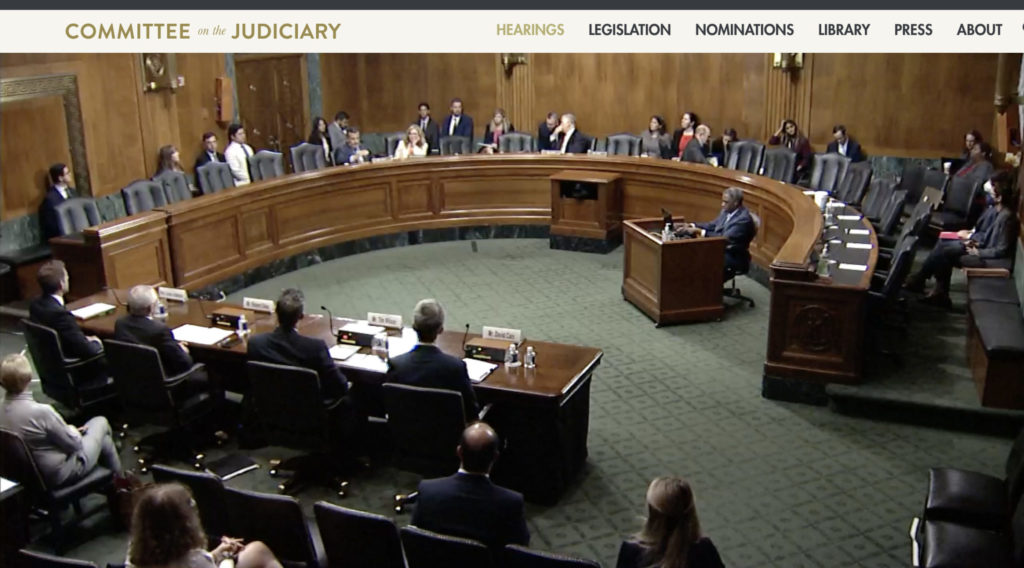 Today, the Senate Committee on the Judiciary’s Subcommittee on Intellectual Property met to hear testimony from four witnesses about proposed changes to the Patent Trial and Appeal Board (PTAB) as outlined in the recently announced PTAB Reform Act. Subcommittee Chairman Senator Patrick Leahy (D-VT), Ranking Member Thom Tillis (R-NC) and Senator John Cornyn (R-TX) introduced the bill last week. Those testifying generally agreed the bill represents compromise and, at Tillis’ prompting, on a scale of green to red, scored it a green to yellow overall.

‘It Isn’t Perfect and it Isn’t Final’ 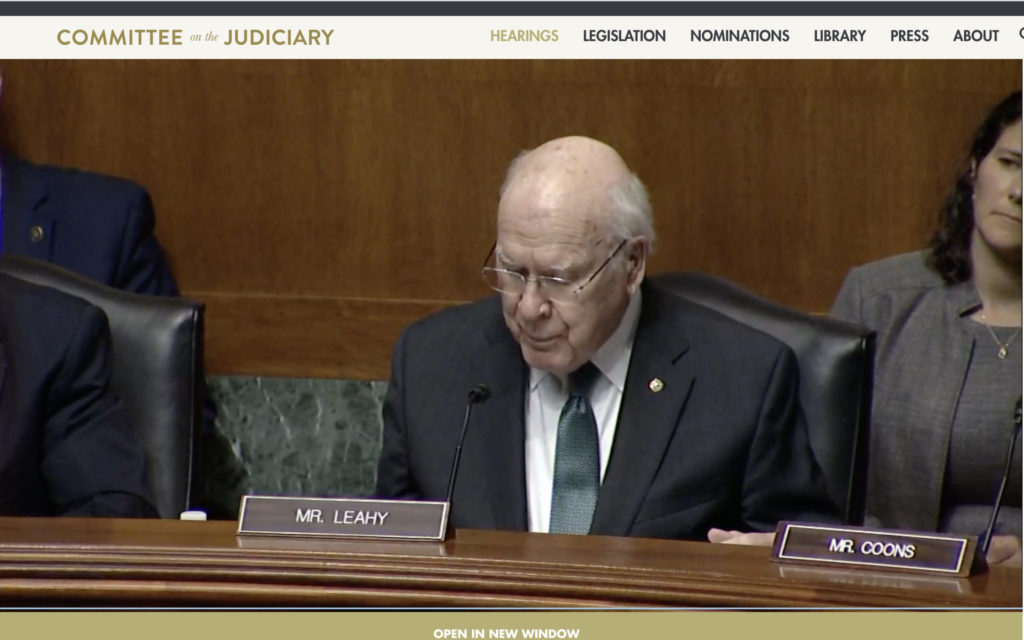 Leahy began by explaining that many believe “all meritorious patents should result in [PTAB] review” and that the PTAB Reform Act strikes a compromise by indicating that meritorious review should generally be granted, while serial petitions from the same or related parties will not be allowed.

The hearing came on the same day that U.S. Patent and Trademark Office (USPTO) Director Kathi Vidal announced interim guidance on discretionary denial practice for the PTAB, in which she clarified that application of the so-called Fintiv factors governing discretionary denials will be limited to the facts of the Apple Inc. v. Fintiv, Inc. case from which it derives, excluding consideration of parallel International Trade Commission (ITC) investigations, for example. She also noted that “to benefit the patent system and the public good, the PTAB will not rely on the Fintiv factors to discretionarily deny institution in view of parallel district court litigation where a petition presents compelling evidence of unpatentability.”

Tillis’ introduction to the hearing included a disclaimer that “this bill isn’t perfect, and it isn’t final, and I’m pretty sure that when it’s final it won’t be perfect,” but said that he is confident it will be able to address most of the concerns that have been raised. “This is the beginning of a process,” Tillis said. “If you don’t like the compromise we’ve come up with, tell us – but don’t just tell us you hate it. Give us ideas.” 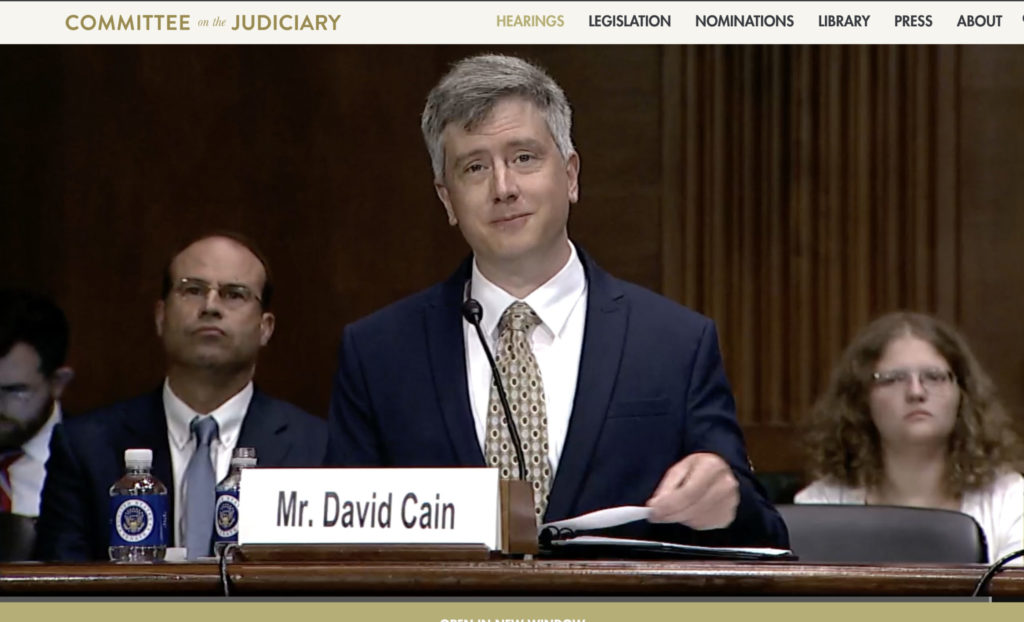 Along those lines, Tillis at one point asked each of the witnesses to rate the PTAB Reform Act on a scale of green for good to red for bad. Cain, head of IP at one of the world’s leading semiconductor manufacturers, said he feels the proposals are “much more green,” with the  “worst case” provisions being yellow. In earlier remarks, Cain said he feels the PTAB has been a fair adjudicator of patent validity and that the company has been happy with PTAB results both as a patent owner and as a petitioner. “We have an extreme amount of innovation going on at our facilities and we count on the system to protect that innovation; we’ve seen very fair and very reasoned decisions coming out of the PTAB,” he said.

Wilson of SAS Institute said that SAS would prefer to remove the PTAB’s “discretion not to institute good petitions” completely, but that “there’s a fair compromise here amongst all of the interests.” The PTAB Reform Act currently says: “In deciding whether to institute an inter partes review proceeding, the Director shall not in any respect consider an ongoing civil action or a proceeding before the International Trade Commission,” thus steeply curbing the PTAB’s ability to discretionarily deny petitions compared to current guidance. While today’s memo took parallel ITC proceedings off the table, it left open the possibility of denying institution based on parallel district court proceedings. “We support this process and all of the compromises so far have been positive; yellow is where we are across the board,” Wilson added.

In his introductory remarks, Wilson said that “the America Invents Act [AIA] has largely done its job by leading to a large decrease in patent litigation,” noting that his company had almost 8,000 patent litigations in 2011, which has been brought down to 3,000 – 4,000 annual patent litigations lately. “I think that’s a great thing,” he said. 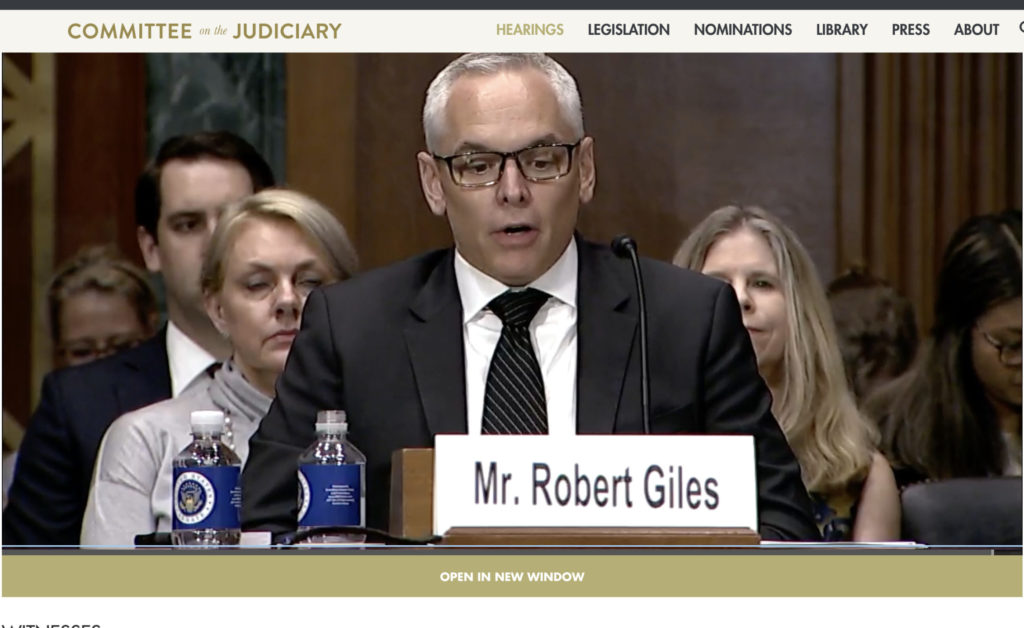 Giles, representing the Innovation Alliance, said that, while adoption of the Phillips standard for claim construction in the PTAB Reform Act “is a step in the right direction, overall we look to the STRONGER Patents Act as a little bit more fair and balanced.” However, he stopped short of rating it red. “I would say it’s yellow,” Giles said.

Senator Chris Coons, who introduced the STRONGER Patents Act, also took part in today’s questioning, and said he is concerned that the PTAB Reform Act’s elimination of the ability to consider co-pending litigation in deciding whether to institute an AIA proceeding “is a step in the wrong direction.” He added that “hard wiring parallel proceedings into the AIA increases costs by encouraging duplicative proceedings and in my view that doesn’t’ benefit the public or the patent system.”

Coons asked Giles what the benefits are to the public and patent system of evaluating concerns about redundant and duplicative proceedings in deciding whether or not to institute an AIA trial. Giles replied that removing that discretion will make parallel proceedings much more likely and “will astronomically increase costs for small businesses to assert their patent rights.” While the PTAB Reform Act contemplates covering costs of AIA trials for small businesses and independent inventors, Coons expressed skepticism about the viability of that and asked Cain what the costs would be. While he didn’t know precisely, Cain replied that he believed it is “very infrequent” that an individual inventor asserting their patent is brought into the IPR system, presumably making the costs of covering such instances relatively low.

Giles told Coons that the largest concern for patent owners that they would like to see addressed in the bill is changing the burden of proof at the PTAB from a preponderance of the evidence standard to clear and convincing. “If the PTAB is acting as an alternative, faster forum, the burden of proof should align as well,” Giles said. He later noted in response to a question from Senator Marsha Blackburn (R-TN) that in district court proceedings, about 30% of patent claims can be expected to be invalidated, while at the PTAB it’s at least twice that high, “if not more,” due to the differing standards. 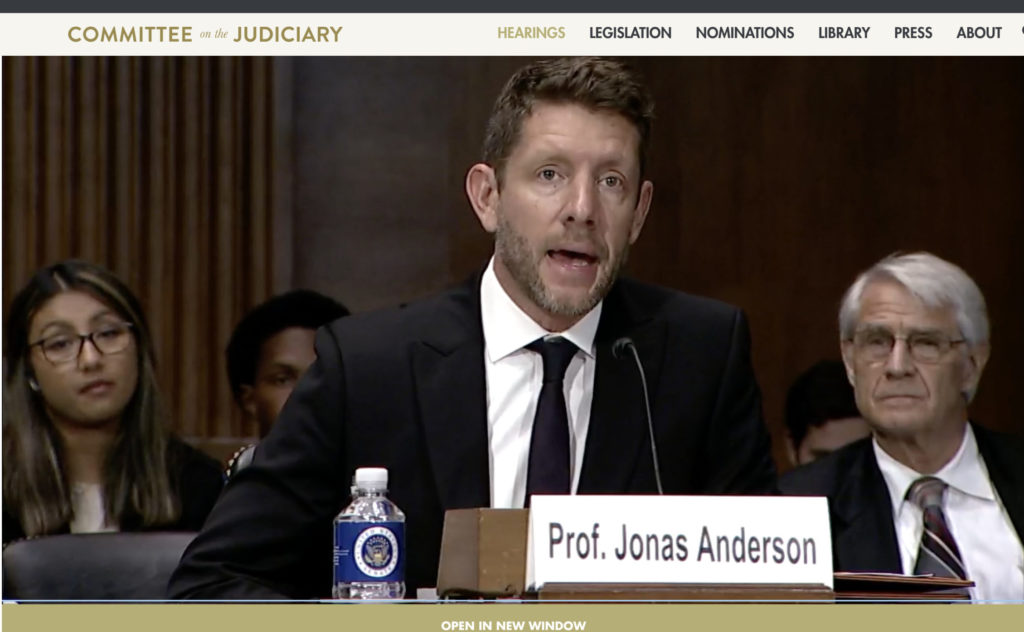 Anderson, a professor whose specific focus has been on federal district courts that seek to attract patent cases to their courtrooms and who believes that the competition among courts for patent cases “is a threat to the judiciary’s legitimacy, not just in patent law but across other areas of law as well,” disagreed, but said the bill is mostly green and “good overall.”

He explained that the effect of the Fintiv ruling “threatens to erode public confidence in the judiciary” and said that, in 2021, roughly 25% of all patent cases were heard by a single federal district court judge (likely alluding to Judge Alan Albright of the Western District of Texas). “This extreme concentration of patent cases is troubling for the judiciary,” Anderson said. “Judges actively encouraging plaintiffs to file in their courtrooms undermines the public perception of fairness in judicial proceedings. The PTAB has been a great benefit for the U.S. system by providing a cost-effective means for challenging the validity of patents. But I also believe Fintiv has led to increased uncertainty.”

Anderson said that while Vidal’s guidance announced this morning limits the applicability of Fintiv, “the PTO ought to rescind the rule entirely” because “the current six-factor test provides no certainty of outcome and, worse, is influenced by plaintiffs who can strategically file their cases in an effort to avoid PTAB review in a court with a reputation for not issuing stays and setting very early trial dates.”

But Giles noted in his response to a question from Leahy many of the issues raised around Fintiv by the other witnesses have been worked out by the patent office in the last few years and that much of the data around trial dates had to do with COVID restrictions. “I don’t think it gives a very accurate description of when a trial date actually stays,” Giles said. “And the Director came out today and cleared up the guidance.”

Conservatives for Property Rights also came out against the PTAB Reform Act’s approach to this and other issues today, arguing that it “would turn an already Kafkaesque nightmare system for inventors and patent owners into a never-ending cycle of administrative validity challenges.”

Leahy and Tillis asked the witnesses to submit additional thoughts and responses in writing and that the record will remain open for seven days. But Tillis made it clear that “the dialogue will continue beyond seven days,” inviting everyone with ideas to the table. “The only thing I don’t tolerate are guerilla tactics to try and undermine what we’re trying to do here. But I would encourage anyone else who’s watching what we’re doing here to engage.”