“Blackberry’s divestment has a similarity score of 37, where Rockstar is 28 and WSOU is 22. This would indicate that the divested Blackberry portfolio, despite Blackberry’s lack of relevant innovation since 2015, holds a higher essentiality ratio than other portfolios that have been divested in recent years.” Measuring the quality of a patent portfolio doesn’t have to be subjective. There are a number of objective indices that measure patent families’ potential economic and reputational value, the breadth of patent claims and the statistical validity strength of a patent.

The Patent Value Index, or PVIX, measures the potential economic and reputational value of a patent. PVIX scores each patent family on a curve from 0-100 using a weighted average of the GDP of the countries in which the family has granted members and the number of forward citations garnered by the family members compared to peer patent families in the same technology classes.

The divested Blackberry portfolio, examined quantitatively in Part I of this series, compares objectively poorly when taking into account its PVIX score (58.69) with the Provenance portfolio (61.60) and the WSOU portfolio (61.25), both of which included patents divested from Nokia. Again, while the PVIX score does not show actual value, it does show potential earning value based on the GDP of the countries in which the portfolio has grants, as well as the forward citations the portfolio has attracted.

While the overall portfolio may have compared poorly to other divestments, in terms of 5G it is the opposite. By using Portal’s 5G OPAL Landscape and focusing on patents identified in the landscape, the average PVIX for this divestment is 71, where Intel’s divestment has the higher PVIX of 73. Rockstar, the former Nortel patents, has a PVIX of 66 and WSOU has a PVIX of 61. 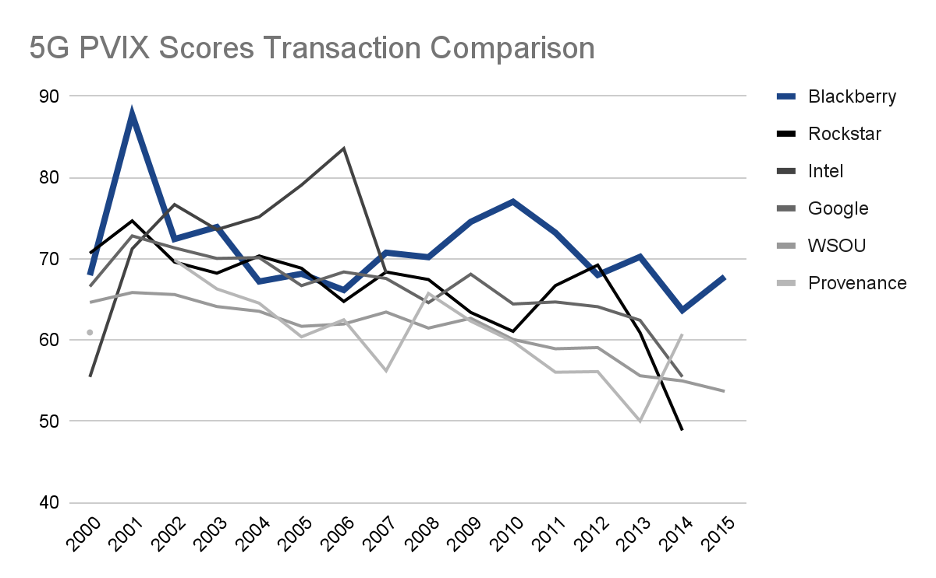 Using the 5G similarity score generated by 5G OPAL to measure how likely a patent is to be essential, this divestment appears to be statistically more essential to 5G than other divestments. Blackberry’s divestment has a similarity score of 37, where Rockstar is 28 and WSOU is 22. This would indicate that the divested Blackberry portfolio, despite Blackberry’s lack of relevant innovation since 2015, holds a higher essentiality ratio than other portfolios that have been divested in recent years. 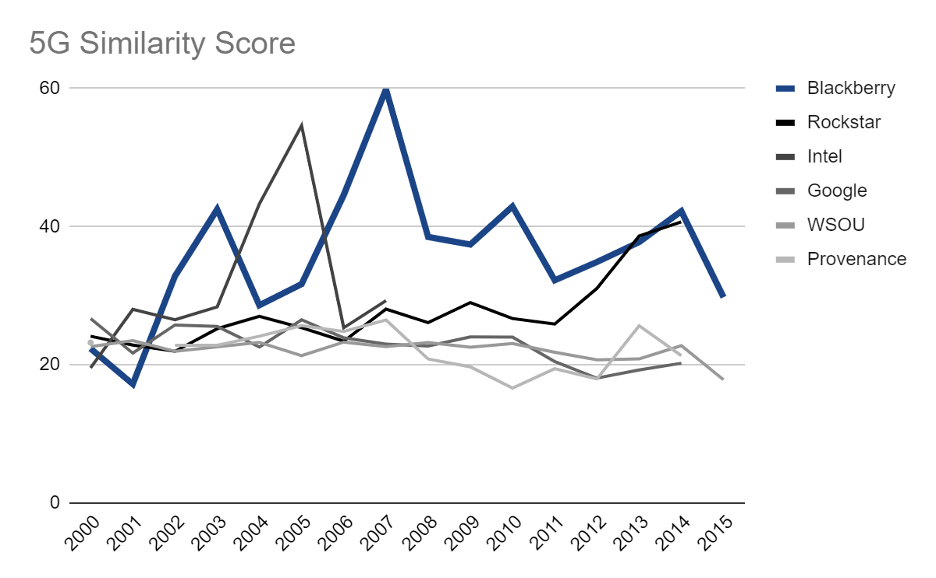 When evaluating 5G self-declared patents for this divestment, two U.S. patents come after the 2015 ITU 5G RAN conference, which kicked off the 5G standard. 44When assuming a 10% essentiality rate, only 24 English language patent families make the cut, with zero patents coming after the 2015 post innovation date. Even when looking at the U.S. self-declared patents, only two fall after the 2015 post innovation date. This could lead to situations where otherwise good patents in the portfolio are not assertable against later technology developments or adjacent technology implementations. 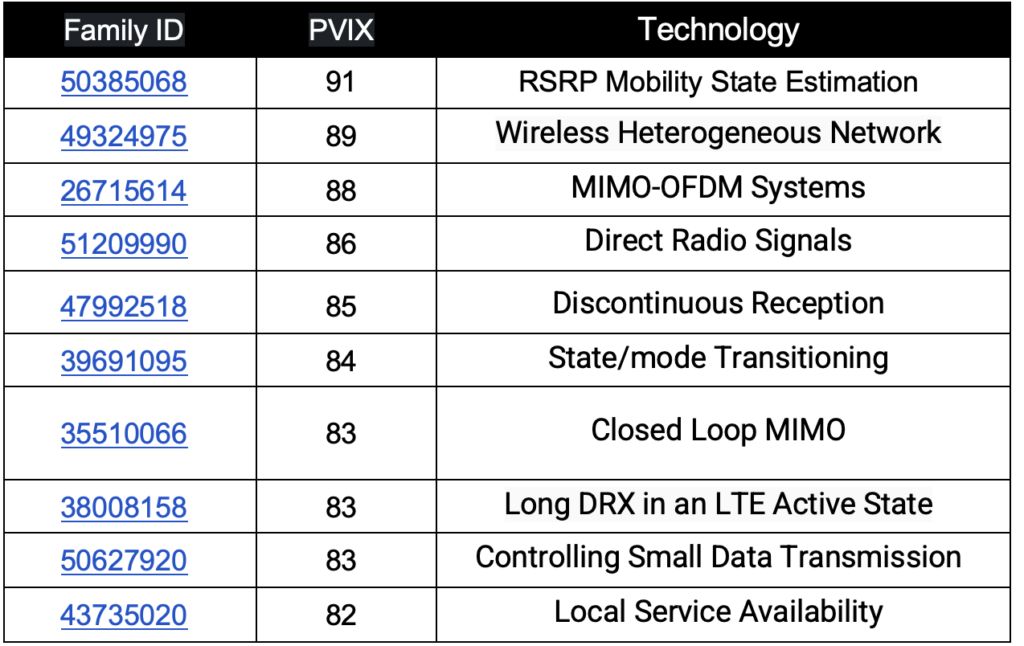 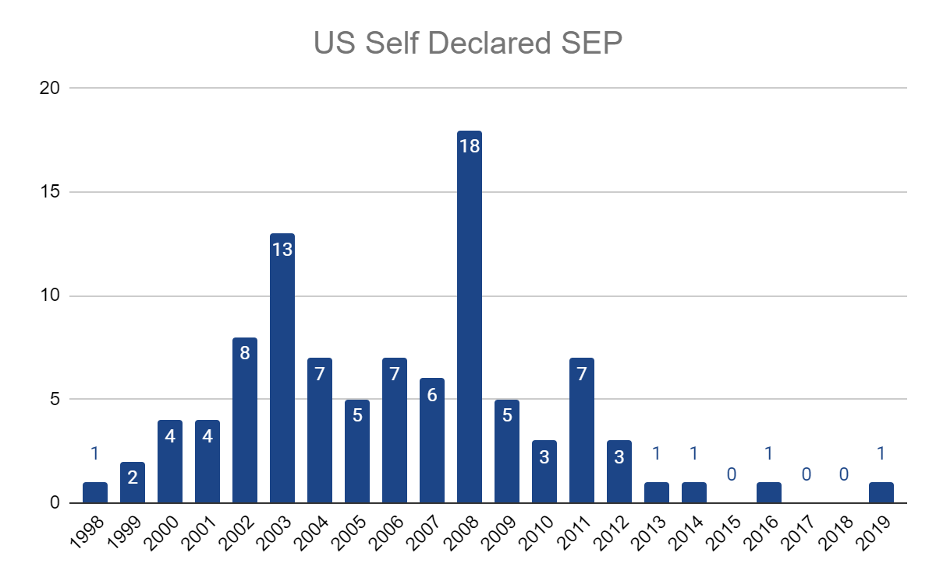 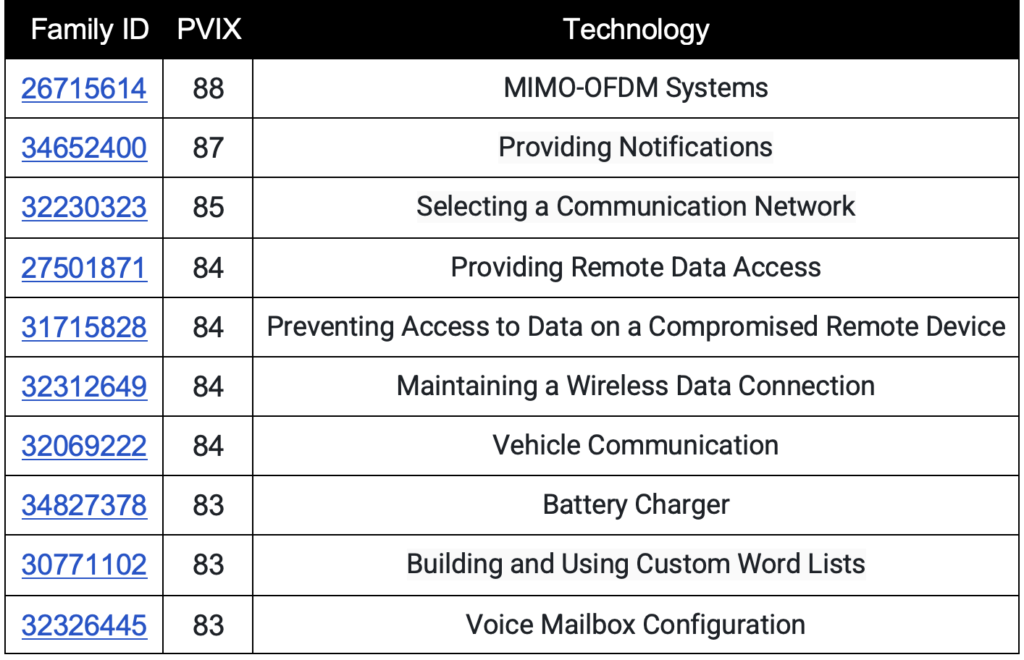 Unified Patents measures the potential applicability of a patent to real-world implementations using its Broadness Index (BRIX). This index measures the uniqueness of all the claims in a patent compared to patents in the same CPC class. It then averages the scores for all the claims in a patent to create a patent-specific score on an ascending scale from D to AA, with AA denoting the broadest claims. Applying BRIX to the Catapult portfolio reveals that 68% of the portfolio has relatively narrow claims with a BRIX score of B or less. While the technology might be considered high value today, it may have troubles with newer implementations. However, these families contain the highest BRIX rating by number of patents in a family, with an AA rating. 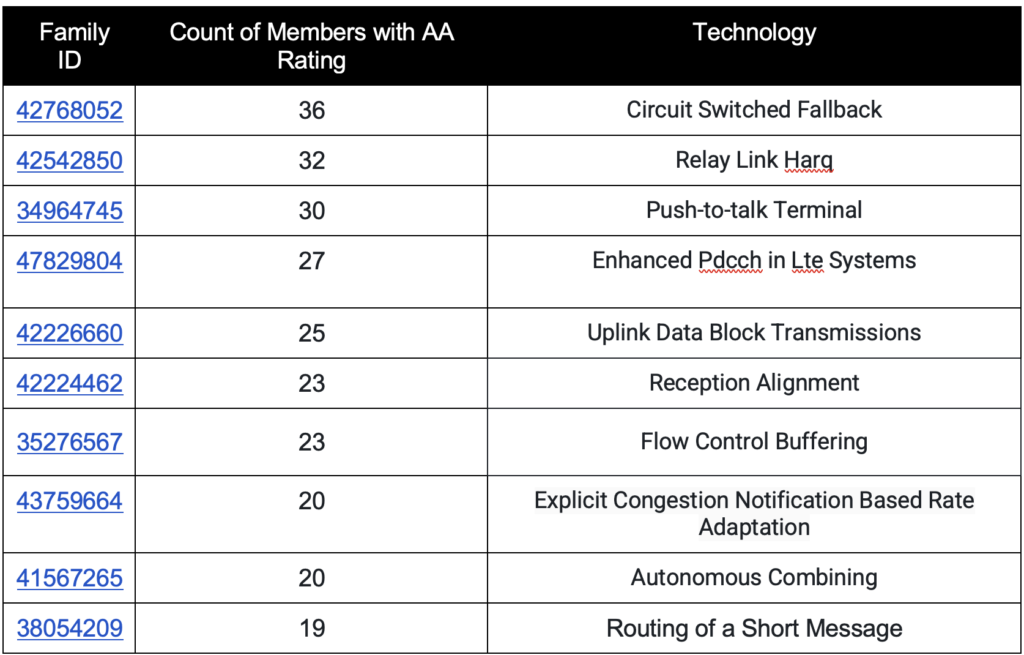 Unified Patents’ Advanced Patent Index (APIX) applies the firm’s experience and knowledge of invalidating patents for the past decade and automates it using a Machine Learning (ML) algorithm trained to predict the potential invalidity of a patent. The algorithm assesses on an ascending scale from D to AA the likelihood a US Inter Partes Review (IPR) would be instituted based on the patent’s bibliographic data. The algorithm’s training involved the ML analysis of thousands of patents against which an IPR was instituted in the US. Since the institution of an IPR leads to a greater than 67% chance that the patent will be invalidated in whole or in part at the end of the IPR proceedings, a low APX score of D or C for a portfolio should be a siren for a low-quality portfolio.

Given that 86% of the divested Blackberry portfolio has an APIX score of B or less, the vast majority of the portfolio, if challenged, may have troubles surviving an IPR. 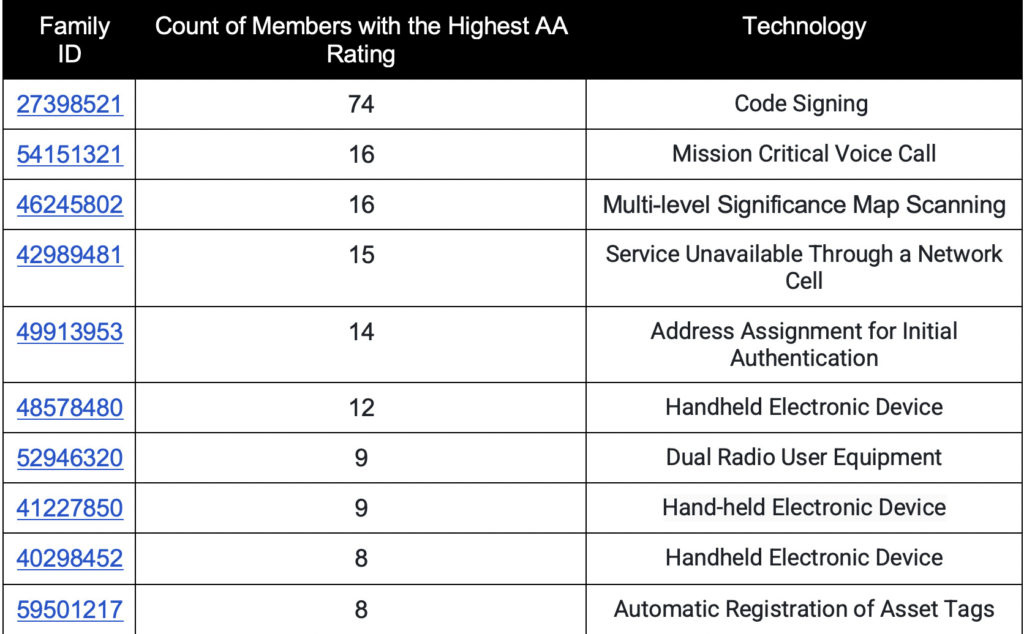 Blackberry’s success or lack thereof in defending its patents in IPRs may be a good proxy for the potential validity strength of the divested Blackberry portfolio. Since 2013, BlackBerry has been involved in 11 cases as the plaintiff and their patents have been challenged 47 times since 2014. Settlements have accounted for 34% (16) of the cases. Denials either on the merits or procedural account for 30% (14) of the cases. Final written decisions where all the claims were deemed unpatentable account for nearly 26% (12) of the cases. Final written decisions that end in mixed results account for nearly 9% (4) of the cases. When any of Blackberry’s patents, whether included in the divested portfolio or not, have been challenged at the PTAB, there is a 64% chance that it will be either settled or some or all of the claims will be found to be unpatentable or amended. 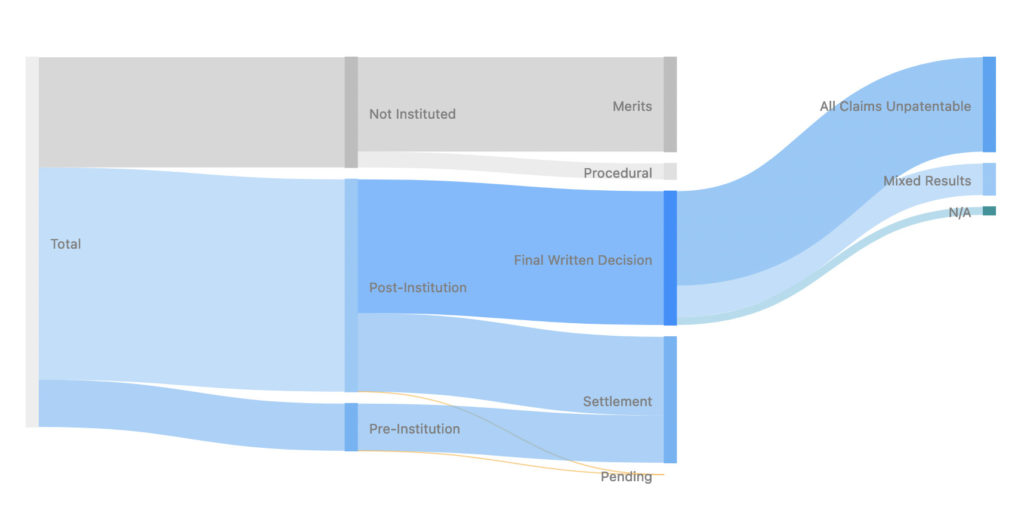 Potential Strengths of the Divested Portfolio

The divested Blackberry portfolio could have monetization potential in the areas of vehicle to everything communications (V2X) and WiFi, this of course depending on the portfolio’s claim reads, validity, licensee encumbrance list, and potential exhaustion.

Blackberry participated in the 2012 development at 3GPP of device-to-device sidelink, which formed the basis for C-V2X, and in the IEEE development of WiFi 4 and 5. As can be seen below, the filing dates for Blackberry’s portfolio coincide with the development dates of sidelink and Wifi 4 and 5. It is interesting to note that nearly 47% of the divested Blackberry portfolio was filed during the critical development windows of technologies such as LTE, LTE-Advanced, D2D sidelink, Wi-Fi 3, Wi-Fi 4, and Wi-Fi 5. It is difficult to imagine that Blackberry would have missed patenting with respect to these important technologies. 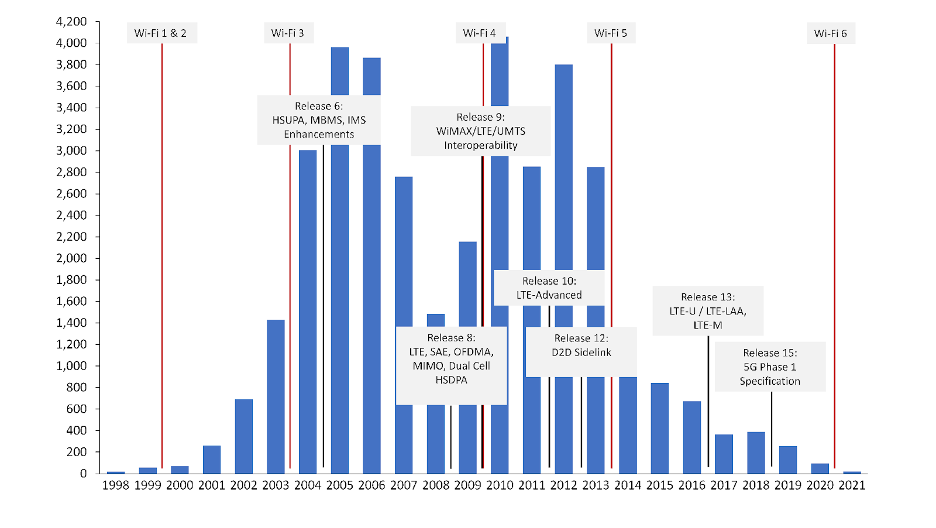 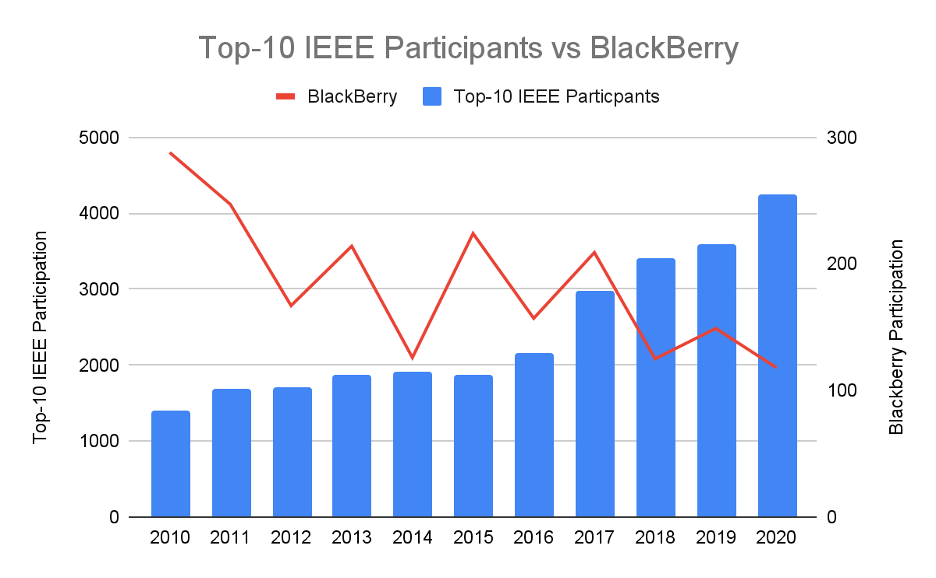 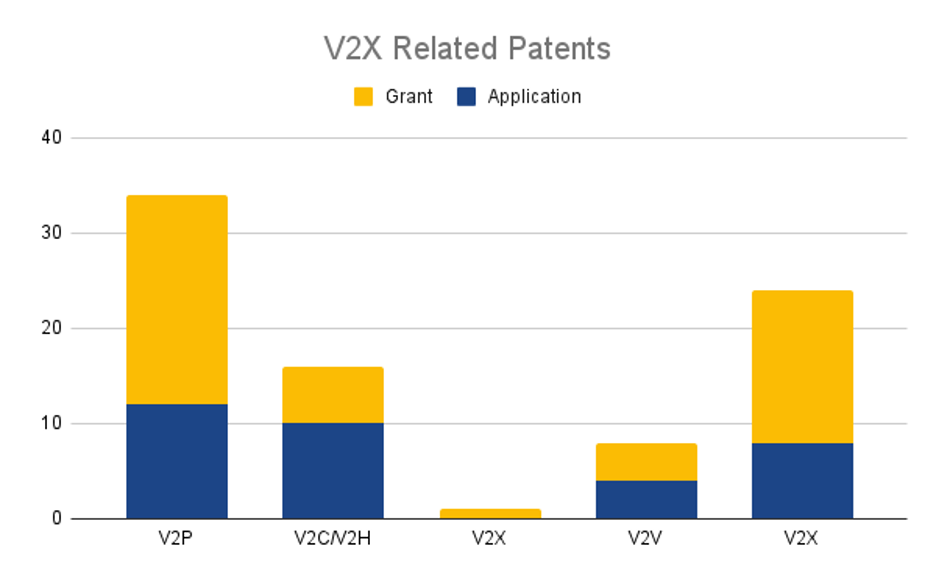 Using PVIX, the Top-10 Families are listed that are related to V2X. 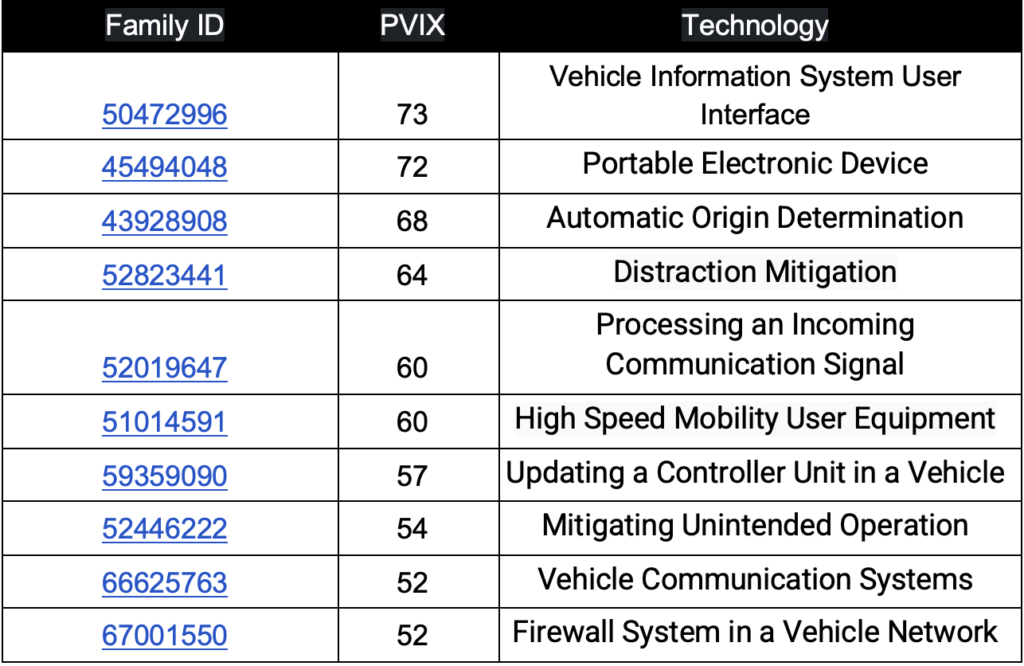 As addressed above, there are certainly statistical grounds to suspect the validity of many of the patents in the portfolio. When Blackberry patents have been challenged in the past through US post grant procedures, over 64% of them have been either subjected to a settlement or suffered an invalidation or narrowing of some or all of the claims. These statistics show that challenging the validity of a Blackberry patent has a high certainty of being successful. While this may not matter much with respect to individual cases, investors in the divested Blackberry portfolio should allocate a high amount of expenses to defending the validity of the portfolio as the statistical chances that the portfolio will be challenged is significantly high.

What is not known is the extent and duration of the so-called licensee encumbrance list, i.e., those entities that can claim a license to the portfolio. As a case on point, Blackberry settled its global patent infringement cases against Nokia in December of 2018, presumably resulting in a license to Nokia under Blackberry’s patents. If that license was a 5-year license, Catapult may be able to seek royalties from Nokia after 2023. Of course, there is the real possibility that Nokia, realizing that Blackberry was looking to divest part or all of its portfolio, would have sought a license under all Blackberry patents for the remainder of their lives. Bigger questions are, one, what other patent holding manufacturers have a license to the Blackberry portfolio and for how long and, two, how much of the portfolio was licensed under Blackberry’s outsourcing deal with Marconi’s Teletry struck in November 2017. In the latter case, if the encumbrance list is skinny, curiosity is piqued as to why. Teletry and the broader Marconi group is staffed with arguably some of the best licensing executives in the industry and therefore the failure to license the portfolio broadly cannot likely be attributable to lack of trying or competence. As a result, every potential licensee and acquirer should pay attention to the due diligence behind any defects in the portfolio.

It seems clear from public record that the Blackberry portfolio has been extensively licensed to the automotive industry through Marconi’s Avanci pool. Certainly, a number of major automotive manufacturers like Toyota, Ford, Honda, and Stellantis have yet to take a license to the Avanci pool but Blackberry’s portfolio inclusion in the Avanci pool doesn’t necessarily guarantee Catapult any revenue from these manufacturers should they take a Avanci license. These manufacturers may be able to claim that the Blackberry portfolio essential to V2X standards is exhausted to the extent that it is practiced in Blackberry’s QNX software platform, which offers advanced driver assistance systems (ADAS), digital cockpits, and secure data gateways. QNX was acquired by Blackberry in 2010 and has grown to be incorporated in over 195 million vehicles produced by the likes of Ford, General Motors, Honda, and Toyota, the very same automotive manufacturers that have yet to take a license from the Avanci pool. Certainly, Avanci is starting its next act in licensing the automotive manufacturers for 5G connectivity but it remains to be seen whether Blackberry’s portfolio is relevant to 5G particularly since Blackberry participation in 5G standardization waned in comparison to its peers. The specter of exhaustion of the divested Blackberry portfolio will continue to haunt licensing efforts going forward as it is likely that the license rights that Blackberry secured in connection with the divestment for its products like the QNX platform will be extensive and operate to give Blackberry an edge in selling its products to the automotive industry.

Only time will tell whether this investment is successful or not. For now, it seems that, with a $600 million price tag, the debt service, prosecution and maintenance costs, potential litigation costs, and a quickly expiring portfolio, the return on investment will be an uphill battle.

Samuel Baird Samuel Baird is an attorney and currently an IP Analyst at Unified Patents. He has been with Unified since 2020. He received his law degree from Case Western Reserve University [...see more]