“While the conversations around the waiver have tended to dominate the headlines, what is happening at the same time [is that] more and more ministers and leaders and industry in developing countries see IP as part of their journey as well.” – Daren Tang 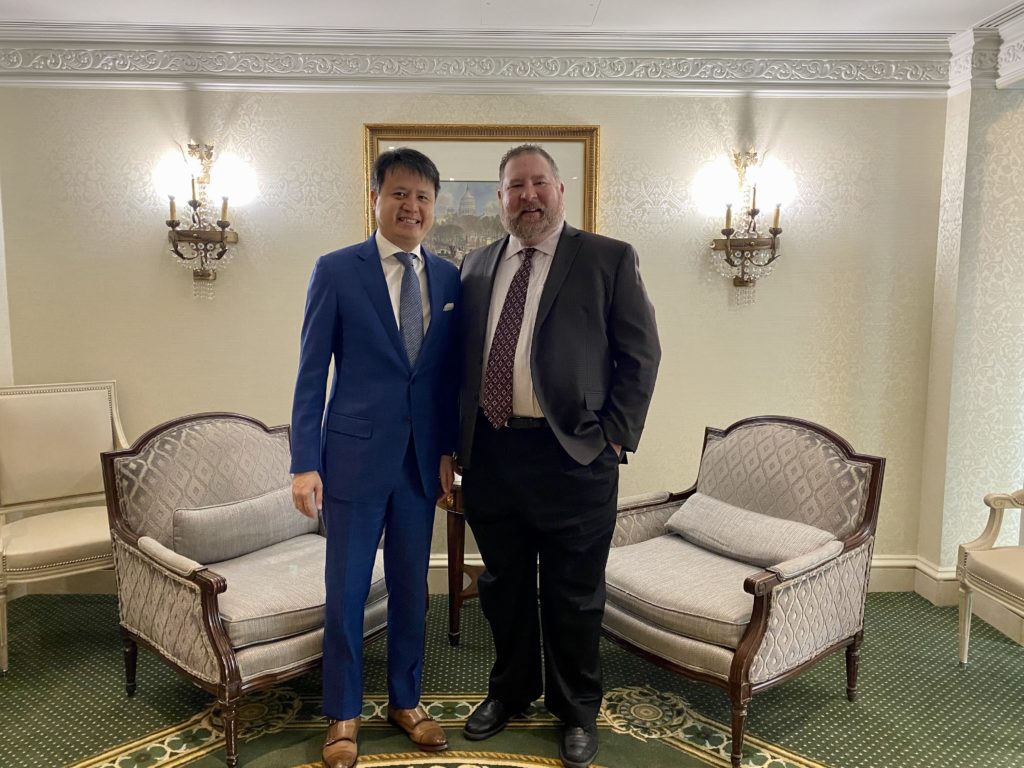 On April 26—World Intellectual Property Day—I had the opportunity to sit down one-on-one for an extended interview with Daren Tang, the Director General of the World Intellectual Property Organization (WIPO). Tang, who was in Washington, D.C., for the International Trademark Association’s (INTA’s) annual conference, spoke with me on the record for approximately one hour. His energy is palpable, his spirit is focused, and his motivations seem genuine. Tang comes across as confident in his mission and extremely affable, and quick with a joke, describing his relationship with intellectual property as “an arranged marriage,” and noting that it was not “love at first sight” in a nod to his first love—international trade law.

“When I joined the IP world, I grew to love it because I realized that it is everywhere around us,” Tang told me. “It is in the technology that we use, it is the brands that we see around us, it is in the content that we create and consume, it is in designs and in packaging. It is in so many things around us. Once you see how much it is part of our lives, then you begin to feel that we need to bring this to other people as well, and not just to people in advanced and industrialized economies but to developing countries and emerging economies. Coming from Singapore, from Southeast Asia, that is so very alive for me.”

And thus began our conversation. Tang is WIPO’s first Director General to come from outside the Organization, an international trade lawyer who clearly understands the importance of intellectual property for creators and stakeholders, and what it can and does mean for developing countries and the under-represented.

With no agenda and only one specific question to ask (more on that later), I let Tang set the focus for our conversation, which was styled as a discussion of the initiatives he began over his first 18 months at the helm at WIPO, and where he sees his efforts going over the next several years.

Getting Women and Youth Involved in IP

“In our efforts to rethink what the global IP community could be like, we decided we wanted to build a more inclusive IP community,” Tang explained pointing to three areas of focus. “One is women and the second is youth… and the third is on small and medium enterprises and startups.” But the overriding theme, which came up time and time again, is making IP relevant for various constituencies so that it becomes a part of “their story.”

What I heard Tang talking about, at least with respect to the first two issues, is something that in the United States over the last handful of years has become an issue of much greater social importance, which broadly speaking relates to under-represented communities. Of course, when dealing with issues involving women inventors it is difficult to know the precise magnitude of the problem because some corporations, such as IBM, which is one of the largest patenting organizations in the world, list their inventors alphabetically regardless of the cumulative contribution. Nevertheless, women clearly are underrepresented, and if you could tap into that creativity, it would benefit everyone.

But is this an output problem, or an input problem? Often young boys are pushed towards math and science, and young girls are pushed away from math and science, and that may or may not even be conscious. I personally think about the issue of under-representation of women inventors as a “long game” with two distinct ends. What do we do to incentivize more companies to give women an opportunity and filing more patents and great access to money when they are starting businesses, and what do we do to encourage young girls?

“Well, I think that is right,” Tang said.  “Beyond IP, we need to support people’s aspirations when they are young and I think that is really, really fundamental.  So, a lot of work we are doing at WIPO is connected to what you are talking about but is to really encourage anyone who has a great idea, anyone who is a future innovator or creator, to be supported and to explore that.”

Tang went on to discuss two specific examples of things WIPO is doing.

We are working to bring an IP curriculum to elementary school kids, 11, 12-year-olds, not to understand IP technically, but to understand the act of creation, the act of innovation, and to encourage them to do that.  And then at the high school level, one of the things that we are exploring is whether we can work with [WIPO] member states, especially in developing countries, to encourage them to found innovation clubs in high school so that the act of innovation is seen as cool and as happening and as normal as other activities such as sports. And then of course when they are young adults, entering college, we are working through the WIPO Academy to train students in IP skills. Last year, the WIPO Academy trained 270,000 people. More and more, we are moving away from training people to become IP professionals, which was the historical focus, to training people to pick up practical IP skills that they can use as an entrepreneur, or as a musician, or as a researcher or in any profession. They just need to know enough IP to help them use it as one of the tools to meet their aspirations. So, we are trying to broaden and move away from just technical IP knowledge to practical IP skills.

An example of our work with SMEs is in Uganda where we partnered with an NGO to mentor 12 female entrepreneurs, over six months, to help them incorporate IP into their business strategies,” Tang explained. “So, while these 12 entrepreneurs may not file patents, they have a brand, they have a business idea and a desire to grow their business. What we do is to tell them that if you want to franchise your brand into the region, you need to have a trademark strategy, you need to make sure that you know how to use the trademark system to be able to negotiate and to license your brand to others in the region that may want to use your products. Then we show them how to use the IP system to support their brand and business. And after that, because they now see that IP is part of their story, they are the ones who will tell this to other people in Uganda, and they are the ones telling this to the policymakers and the decision makers in Uganda as well.  And we are trying to replicate these sorts of projects all over the world.

TRIPS IP Waiver: WIPO’s Focus is to Get Emerging Economies on Board with IP

Before I let Director General Tang go, I had to take the opportunity to ask him about whether he had any comment on the ongoing discussions relating to the TRIPs waiver relative to the COVID-19 vaccines, an issue which I knew he had avoided commenting on because it is really outside the purview of his role at WIPO.

“The last thing I’d like to ask,” I said. “And I know you have kind of tried to stay a little bit out of this—”

“The TRIPS waiver. Yeah,” I said. “Being you are the global face of intellectual property, even though WIPO hasn’t had a role in this, I wanted to ask you what your thoughts are to the extent you have thoughts you can share.” 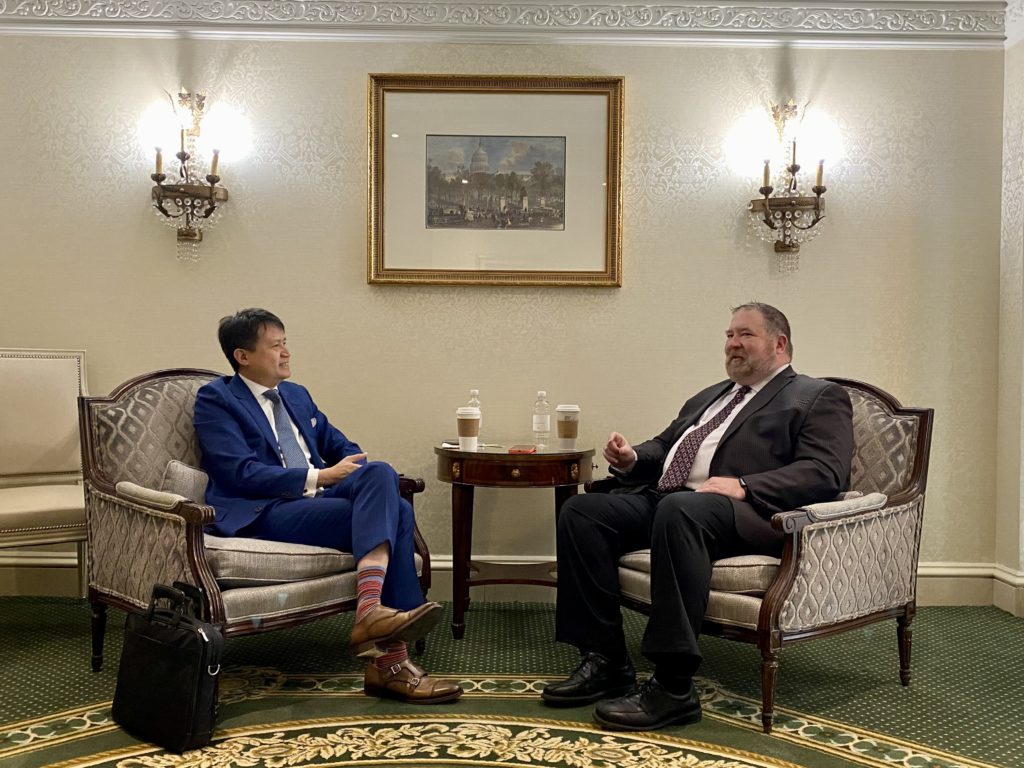 After some polite dancing around the outskirts, he pointed to a number of programs that WIPO has launched to help member states to respond to the COVID-19 crisis, including an unprecedented three-UN-agency cooperation with the Directors General of the World Health Organization and World Trade Organization. A key part of the cooperation is “a trilateral gateway where member states can use an online mechanism as a one stop shop to access the tools and the offerings and the services of all three agencies.” Tang explained that, “while the conversations around the waiver have tended to dominate the headlines, what is happening at the same time … [is that] more and more ministers and leaders and industry in developing countries see IP as part of their journey as well.” Prime Minister Modi has said that innovating is part of the core economic strategy in India,” Tang explained. He continued:

And three weeks ago, I was in Cabo Verde, this small island state off the west coast of Africa, 11 islands, 500,000 people, and the strategy there is to use IP to transform the economy, because they want to be a hub for startups. I was in Brazil, Mexico, Dominican Republic and Cuba and everywhere I have been, whether they are big developing countries or smaller economies, have said that we want to use IP for growth and development. So, while the headlines sometimes are dominated by the debates on the waiver, what is happening is that more countries are saying that IP is part of my story, IP is part of my journey and IP can be a very powerful tool for me as a developing country, to grow and develop and to define new engines of growth for my people. So, the increased acceptance of IP around the world is really a positive sign for the global IP community. And the debate around the waiver will go on, but at the same time there is a lot of work that we can do too, in our own way, to make and send the message to everyone that IP is a force for good and it can really benefit people around the world.