Biotechnology at the Supreme Court—Will the U.S. Government Back Amgen’s Petition?

“After examining the history of this case, and specifically Judge Andrews’ application of the long-standing Wands factors…leaving enablement as a question of law based on underlying facts may be the best course of action.” 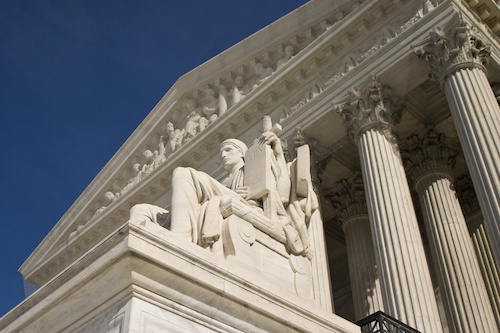 Earlier this year, we discussed Amgen’s petition for Supreme Court review of the Federal Circuit’s affirmance invalidating several antibody patent claims based on a lack of enablement for genus claims. At that time, we believed Amgen had a slim chance of its petition being granted—mainly because the Supreme Court denied a similar petition from Idenix in 2021 (No. 20-380, January 19, 2021).

Returning to Amgen’s first question presented in its petition, one is left to wonder whether enablement lends itself to a pure question of fact or whether the current Federal Circuit standard (under which it is a question of law based on underlying facts) is the correct interpretation. Interestingly, in footnote 2 of its petition, Amgen dismissed the Federal Circuit panel’s attempt to liken enablement to obviousness. But given that both enablement and obviousness invoke complicated, multi-factorial tests (the Wands and Graham factors, respectively), the panel’s comparison seems apt.

After examining the history of this case, and specifically Judge Andrews’ application of the long-standing Wands factors, 858 F.2d 731 (Fed. Cir. 1988), leaving enablement as a question of law based on underlying facts may be the best course of action.

Lack of Enablement at the District Court

The dispute between Amgen and Sanofi goes back to 2014, when Amgen alleged that Sanofi’s and Regeneron’s PCSK9-blocking antibody product, Praluent® (alirocumab) injection, which is Food and Drug Administration (FDA)-approved to lower LDL (bad) cholesterol, infringed several Amgen patents. In 2016, a first jury found Amgen’s patents not invalid and infringed, but the Federal Circuit vacated and remanded, holding that post-priority date evidence could be considered in evaluating enablement and written description. See 872 F.3d 1367, 1373-75.

In 2019, a second jury again found Amgen’s patent not invalid for written description and enablement. While patent validity is ultimately a question of law, issues of, for example, enablement and obviousness rest upon detailed factual findings. Notably, the Amgen v. Sanofi jury verdict form assessed invalidity with a single “yes” or “no” check box for each claim (see below). As a result, it was Judge Andrews in his opinion granting Sanofi’s post-trial Rule 50 motion who reviewed the record and made factual findings to evaluate the Wands factors in determining whether the amount of experimentation required to practice the claims’ full scope is “undue.”  See C.A. 1:14-cv-1317-RGA, D.E. 1050 at (D. Del. Aug 28, 2019). 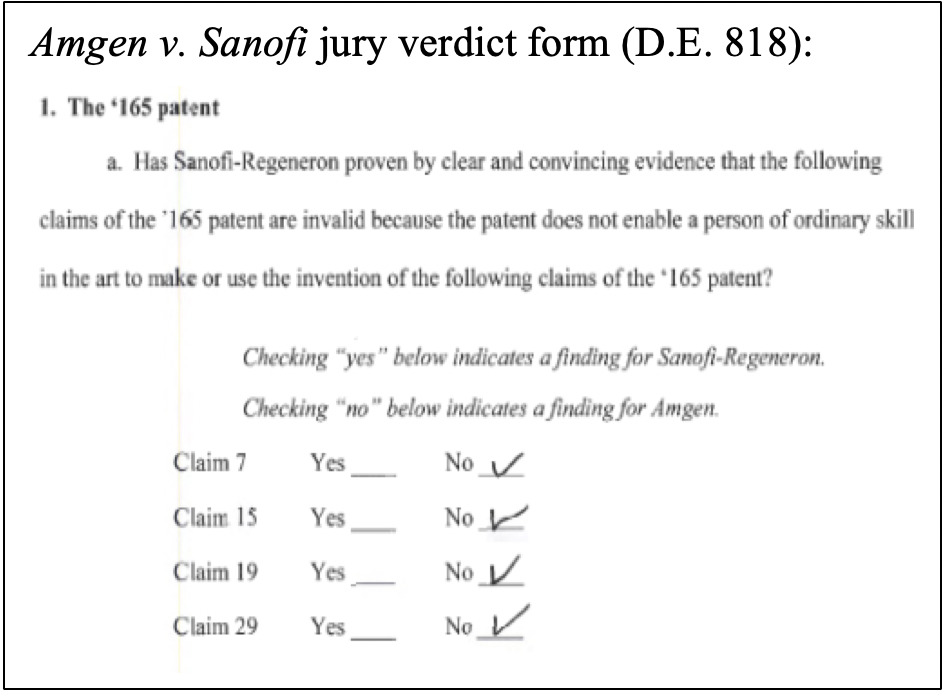 In particular, Judge Andrews found that “a reasonable factfinder” could only have found that: “the scope covered by the claims is broad”; “the structure-function relationship [for the claimed antibodies] is unpredictable”; and “[a] person of ordinary skill in the art can only discover undisclosed claimed embodiments either (1) through trial and error, by making changes to the disclosed antibodies and then screening those antibodies for the desired bonding and blocking properties, or (2) by discovering the antibodies de novo.”  Id. at *13-*21. As a result, the court found that “any reasonable fact finder would find that practicing the claims’ full scope would require substantial experimentation,” which was “undue” because, inter alia, a person of ordinary skill in the art would be required to do almost exactly the same amount of work as the patentee in order to identify additional antibodies within the full scope of the claims. Id. at *23.

In each of these cases, broad functional claims were found invalid based on a lack of predictability and guidance that would require undue experimentation for a person of ordinary skill in the art to practice the full scope of the claims. The panel also noted that “[w]hile functional claim limitations are not necessarily precluded in claims that meet the enablement requirement, such limitations pose high hurdles in fulfilling the enablement requirement for claims with broad functional language.”  Id. at 1087. The panel then reviewed Judge Andrews’ findings concerning the Wands factors, finding no clear error in his analysis. Id. at 1087-88.

Amgen’s first question presented in its petition for cert. frames the issue as another instance where the Federal Circuit deviated from a statute, the Federal Rules, or long-standing precedent:

But a deeper dive into Wood v. Underhill reveals that the Supreme Court’s holding in that case is similar to the current enablement standard used by the Federal Circuit. The patent at issue in Wood claimed methods of making bricks and tiles using proportions of coal dust and clay, and the Supreme Court interpreted the enablement requirement as requiring a patent specification “be in such full, clear, concise, and exact terms as to enable any one skilled in the art to which it pertains to compound and use it . . . without making any experiments of his own.”  46 U.S. (5 How) 1, 5-6 (1846). “[W]hether the fact is so or not is a question to be decided by a jury, upon the evidence of persons skilled in the art to which the patent appertains.”  Id. at 6. Most tellingly, in reversing the circuit court’s finding of invalidity for lack of enablement based on erroneous instructions to the jury “that the specification was too vague and uncertain to support the patent,” the Supreme Court also held that “this [lack of enablement] does not appear to be the case on the face of this specification.”  Id. Thus, the Supreme Court found as a matter of law that the patent at issue in Wood was enabled.

Indeed, the Supreme Court has reiterated time and again that the ultimate question of patent validity remains a question of law. See Microsoft Corp. v. i4i Ltd. P’ship, 564 U.S. 91, 96-97 (2011) (“While the ultimate question of patent validity is one of law, . . . the same factual questions underlying the PTO’s original examination of a patent application will also bear on an invalidity defense in an infringement action.” (citations omitted) (citing Graham v. John Deere Co. of Kan. City, 383 U.S. 1, 17 (1966))).

Re-phrasing Wood’s instruction, we are left with a requirement that questions of fact in support of determining enablement must be determined by a jury. However, as noted above, the jury verdict form in Amgen v. Sanofi omitted any questions concerning the factual underpinnings of enablement, such as the breadth of the claims, sufficiency of the specification, or predictability in the art.

Therefore, to the extent remand is required by Wood, it would be for a third jury trial with explicit instructions for the jury to consider the Wands factors and make factual findings. However, given that jury form was negotiated by both Amgen and Sanofi, we see no reason to tax the Delaware courts with a third trial. Nor do we see anything wrong with the Supreme Court deciding to maintain the status quo on enablement.

We look forward to the Solicitor General’s brief later this year to see if the U.S. government feels the same way about this case.