“China must provide a level playing field for IP protection and enforcement, refrain from requiring or pressuring technology transfer to Chinese companies at all levels of government, open China’s market to foreign investment, and embrace open and market-oriented policies.” – Special 301 Report 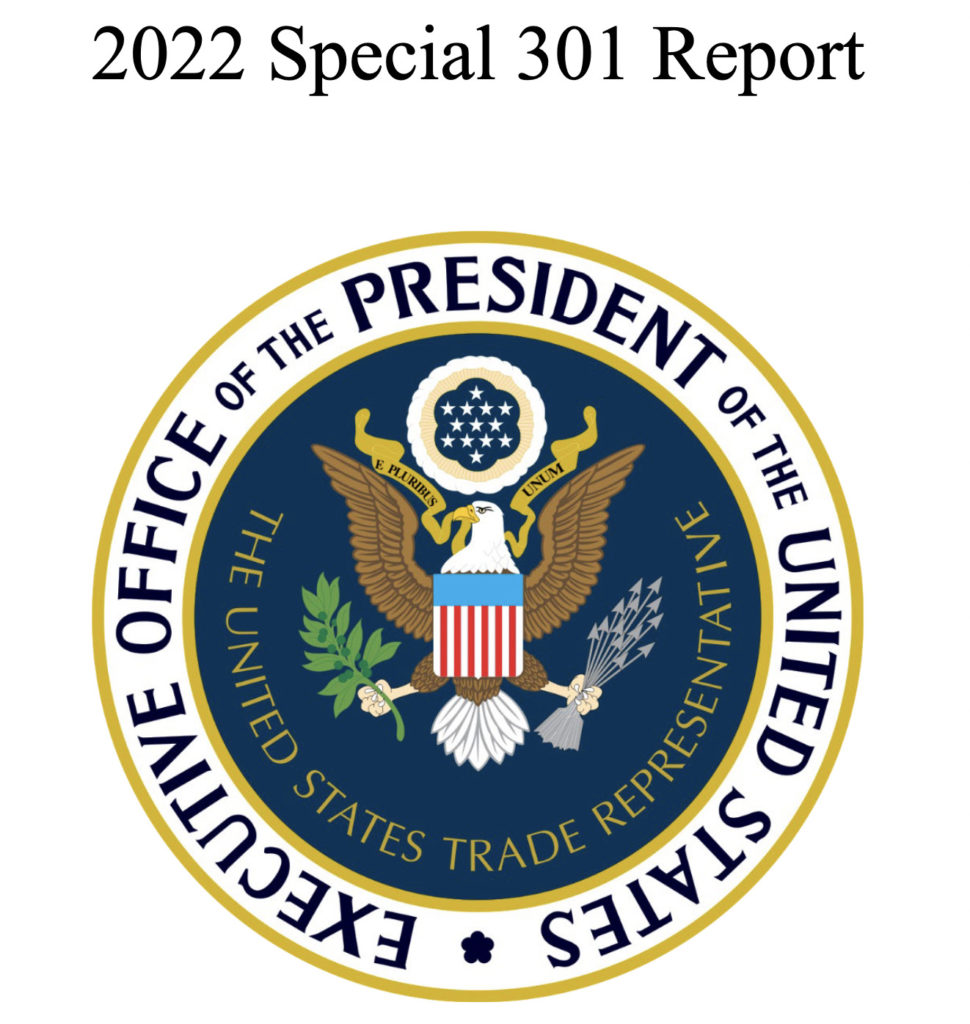 The Office of the United States Trade Representative (USTR) released its annual Special 301 Report today, which identified 27 trading partners of the United States as being either on the “Priority Watch List” or “Watch List.” This means that “particular problems exist in that country with respect to IP protection, enforcement, or market access for U.S. persons relying on IP,” according to the Report. While the Priority Watch List is shorter this year, the USTR continues to highlight concerns about China, particularly with respect to recent statements made by Chinese officials about the role of IP in achieving Chinese market dominance.

One reason for the shorter Priority Watch List this year (seven countries compared to 2021’s nine and 2020’s ten) is that review of Ukraine has been suspended considering Russia’s “premeditated and unprovoked further invasion” of the country. The Report notes that Ukraine has “engaged meaningfully” with the United States on areas of concern such as its system for collecting and distributing copyright royalties to right holders, the use of unlicensed software by government agencies and implementing better methods of combating widespread copyright infringement.

Russia remains on the Priority Watch List this year, but the Report notes that, due to the war and the administration’s efforts to isolate Russia from the global economy, “the ability of the Office of the U.S. Trade Representative to raise and resolve intellectual property (IP) protection and enforcement issues in Russia is severely limited.” The USTR is also “closely monitoring” reports that Russia is allowing infringement of IP rights held by companies based in countries that have sanctioned Russia.

Below is the full list of countries discussed in this year’s Report:

All Eyes Remain on China

China receives the most attention of any country included in the Report by far. Over ten pages, the USTR explains that despite amendments to its patent, copyright and criminal laws aimed at improving IP protection and enforcement, China has yet to address the more fundamental issues that continue to plague IP owners, such as “weak enforcement channels and a lack of transparency and judicial independence.” The Report notes that the president of the Supreme People’s Court in early 2021 wrote that “the courts should serve the Chinese Communist Party and industrial policy goals.” Taken in combination with other statements made by Chinese officials last year, including that the IP system “should serve the needs of domestic innovation-driven development” and that China should become “an optimal location for international IP litigation,” such sentiments “recall long-standing concerns about requiring and pressuring technology transfer from foreign individuals or companies to Chinese companies, as well as about whether IP protection and enforcement will apply fairly to foreign right holders in China,” says the Report.

In particular, the Report notes that the USTR in 2018 identified Chinese practices that enforce investment and other regulatory requirements that “require or pressure technology transfer, substantial restrictions on technology licensing terms, direction or facilitation of the acquisition of foreign companies and assets by domestic firms to obtain cutting-edge technologies, and conducting and supporting unauthorized intrusions into and theft from computer networks of U.S. companies to obtain unauthorized access to IP.”

The United States also initiated a World Trade Organization case against China in 2018 that “challenged Chinese measures that deny foreign patent holders the ability to enforce their patent rights against a Chinese joint-venture partner after a technology transfer contract ends and that impose mandatory adverse contract terms that discriminate against and are less favorable for imported foreign technology as compared to Chinese technology.” China ultimately withdrew certain of the challenged measures and, in 2020, “agreed to provide effective access to Chinese markets without requiring or pressuring U.S. persons to transfer their technology to Chinese persons,” among other commitments made as part of the United States-China Economic and Trade Agreement (Phase One Agreement). The Report says the USTR is continuing to evaluate with stakeholders whether these commitments are being upheld.

“China must provide a level playing field for IP protection and enforcement, refrain from requiring or pressuring technology transfer to Chinese companies at all levels of government, open China’s market to foreign investment, and embrace open and market-oriented policies,” the Report adds.

Another major problem for U.S. IP owners in China continues to be bad-faith trademarks. The recent amendments made to the trademark law are not enough to combat—and in some respects may have worsened—the “overwhelming” number of bad-faith applications filed. “While some right holders welcomed the reported reduction in filing fees, review times, and examination times, these changes also make it easier for bad faith trademarks to be registered and gain approval,” explains the Report. The China National Intellectual Property Administration (CNIPA) has also made some improvement with respect to rejecting bad-faith applications at the examination stage without an intent to use in commerce, but this is chiefly limited to marks filed in large volumes by “hoarders” and there is still inconsistency in decisions overall, and low success rates for oppositions. While CNIPA released an Action Plan in March 2021aimed at better combating bad faith trademarks, there has been little progress, “largely due to authorities’ focus on bad faith trademark registrations that ‘offend socialist morality’ as opposed to those that seek to capitalize on the reputations of existing brands,” notes the Report.

The Report also highlights continuing concerns with rampant counterfeiting, the lack of an independent judiciary, “social credit systems” for IP filers and agents and the use of anti-suit injunctions by Chinese courts “in support of their attempts to assert jurisdiction over global SEP disputes.”

The Report also spends a fair amount of time on the USTR’s concerns about the European Union’s “aggressive promotion of its exclusionary geographical indications (GI) policies.” The chief concern is with the extent to which a GI may impair the scope of trademark protection for marks that pre-date the protection of a GI. The EU policies are causing problems for U.S. IP owners of products that are “identified by common names or otherwise marketed under previously registered trademarks,” says the Report. The GI application review process has also largely been transferred to EU Member States and the time periods for opposing registration of a GI that is part of the EU’s Common Agricultural Policy have been reduced.

Kuwait, Romania and Lebanon were all removed from the Watch List this year due to significant progress made, while Saudi Arabia was removed from the Priority Watch List due to a number of steps taken by the Saudi Authority for Intellectual Property to expand and improve IP enforcement procedures.

Governments must choose: they can either support systems that allow individuals with a novel idea to have a fair shot at success or roll back intellectual property protections thus leading to less innovation, fewer choices, and less economic prosperity…. While the global IP environment has improved over the last decade, the Special 301 Report shows that many nations still have far to go in providing and protecting intellectual property rights.