“This secret identity is proving to be a costly affair for Banksy, as more and more cancellation applications are being filed against his trademarks, risking any future registrations too, and copyright protection poses a challenge to his artistic persona.” 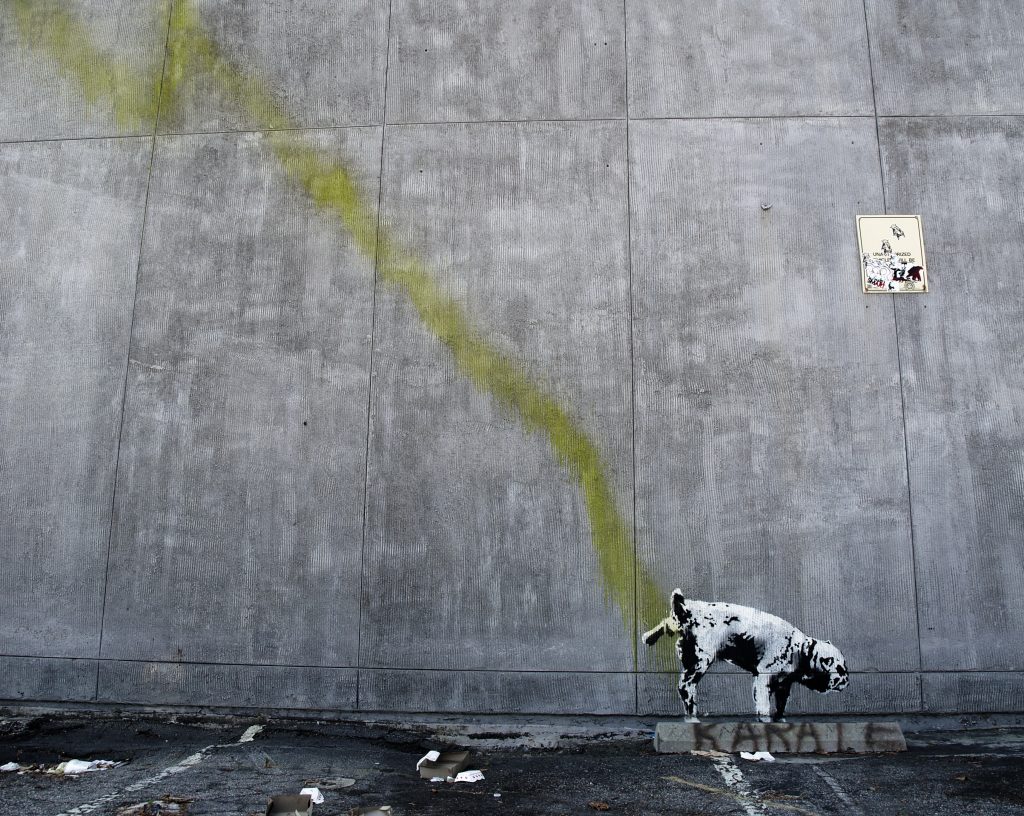 The struggles that most artists endure include creativity blocks and economic hardship; however, British artist Banksy seems unaffected by either of these. His street art is celebrated all over the world for its anti-authoritarian tone and his extremely secretive personal identity. Recently, he has even been venturing into Non-Fungible Tokens.

But unwittingly, and rather humorously, Banksy is facing a different kind of dilemma in terms of either revealing his overtly confidential identity or losing exclusive rights to his works. This scenario presents a case study to explore the overlap of IP rights—in Banksy’s case, copyright and trademark law—and the legality of graffiti art. It equally sheds light upon rules surrounding invalidity and revocation of a registered trademark in the European Union (EU).

Banksy is not just an artist; he is more like a statement, and at times, a verb too. He directed a documentary, “Exit through the Gift Shop,” in 2010 to shed light on the behind the scenes of drawing on a wall in public view without permission. This type of street art is typically characterized as graffiti art.  The documentary was nominated for an Academy Award. That’s the power of Banksy. His work can be identified almost instantly when spotted at any street corner in the world. He truly is a cosmopolitan artist, from Reading to Palestine, even his shredded work gets auctioned for millions. And the authorities cannot deny this fever either.  They trust Banksy’s art and fame to boost tourism and have put in checks and balances to maintain the sanctity of his temple (often stencilled illegal work). Additionally, the identity of the man is as clandestine as the question of Google’s algorithm. While there are some guesses, it is mostly believed that only some people who work at the Pest Control Office Limited, the Company dedicated to authenticating all things Banksy, can confirm his true identity.

In light of his fame, one has to wonder how an artist with what is likely a sizeable legal team ends up losing control over at least six of his trademarks in just two years.

An artist holds an indisputable bond with their creation and it’s only natural to seek protection against its unauthorized use. Banksy, however, is a stern critic of any traditional IP protection, as he believes in creating art for everyone and has always kept (or at least tries to) his distance from commercial production and art galleries. A quick view of the Pest Control website reveals him to be open to the non-commercial use of any of his creative works by any of his admirers. But as he witnessed a surge in the commercial usage of his work in galleries, auction houses and on merchandise like t-shirts, mugs, bags, and stationery, he seemingly has come to terms with the fact that, to maintain the accessibility of his work for all, he must knock on the doors of IP offices globally. So, from as early as 2014, he has resorted to filing trademark applications, and as of January 1, 2022, there were 18 trademark applications (inclusive of six cancelled registrations)  filed by Pest Control on behalf of Banksy in the EU.

However, Banksy’s priority to protect his identity is causing him problems. On cancellation applications filed by greeting cards company Full Colour Black Limited (FCB), which sells Banksy’s art on its cards, the European Union Intellectual Property Office (EUIPO), Cancellation Division, determined two more of his most celebrated works (Love is in the Air/Flower Thrower and the Monkey) to be invalid trademarks. During the two hearings, FCB’s main argument was that Banksy has time and again made statements, either himself or through his representatives, signalling the use of his trademarks only for the purpose of avoiding cancellation. He even created his own store, Gross Domestic Product (GDP), in October 2019 to sell goods according to the classes (mostly 9, 16, 25, 28 and 41) his trademarks are registered in.

Some say that the ghost of his most famous statement “Copyright is for Losers,” written in his book, “Wall and Piece,” has made a comeback, as his trademark registrations in the EU appear to be trickery to circumvent copyright law and in lieu of indefinite trademark protection and faster registration in countries like the United States and Australia.

To avoid confusion, the EUIPO had to clarify that making derogatory statements about a particular law was not the reason for the series of cancellations. It was the statements made publicly by him and his legal team addressing his shop GDP as the “least poetic reason to make art” and only to fulfill trademark obligations. These statements, plus the fact that he only began to use the concerned trademarks some months before the cancellation applications were filed, caused him to lose the battle. What hurt him more was the open admission of this guilt in various newspaper articles and on his website.

The only option available to him at this point is to claim copyright protection, but any infringement claim cannot be made without having to disclose his identity. His situation is peculiar, as he already struggles to claim copyright protection for his works due to the nature of graffiti art. For copyright protection, even under Pest Control’s name, the company would have to reveal that the ownership of the work was transferred by the original author (that is Banksy) to the Company. And in doing so, Banksy’s identity would be jeopardized, not only for the purpose of maintaining the enigma around his persona but also protecting himself from potential prison time. While as an artist he is celebrated and applauded, graffiti art isn’t always. In many places it is still very much illegal. His unknown identity serves the dual role of creating hype around his personality and protecting him from any legal proceedings.

All cancellation applications against Banksy’s trademarks have been argued on similar grounds. The grounds of cancellation can be based on either invalidation for bad faith at the time of filing the applications or revocation for non-use within a continuous period of five years. Under the EU Trademark Regulation, Article 58 and Article 59 provide for revocation and invalidation grounds, respectively.

But the EUIPO rejected this argument and evaluated the intention of the Applicant at the time of filing the application, coupled with Article 7(1)(b) and Article 7(1)(c), which provide for absolute grounds of invalidation when the trademark is devoid of any distinctive characteristics. The works of Banksy are distinct as art on a wall, but as a mark on any merchandise under trademark law, Banksy can himself hardly distinguish GDP’s products from any New York Metro station’s shop proudly displaying Banksy’s art on a water bottle. FCB argued that the use of Banksy’s work on their goods was only ornamental and nowhere close to a trademark. And because Banksy had given an open license to everyone to use his work for non-commercial use, he was in many ways already losing control over the distinctiveness element of a trademark.

The cancellations focused mostly on an assessment of Banksy’s intention to use the marks at the time of filing. The EUIPO was burdened to define the term “bad faith.” In a general sense, any Applicant who files for ownership over a mark, by  virtue of that Application itself, is believed that it will in good faith use the mark in the future. It is true that, unlike the United States, the “proposed to be used” element is not scrutinized that critically in the EU. EU Trademark law doesn’t include a strict burden on the Applicant at the time of filing the Application to prove their intentions to use the mark in the future. But, if after a continuous period of five years of registration the mark has not been put to genuine use without a valid reason, or without the intention of maintaining healthy competition in the market, it is believed to have been filed in bad faith.

The Problem with Secrets

Graffiti used to be the black sheep of the public art family (partly because no one claimed it). But a lot of street artists now realize the responsibility of declaring ownership, even when in most places graffiti is still considered vandalism, punishable by law. Bansky accepts or rejects ownership of street art all over the world that resembles his signature style (mostly through Pest Control), but to keep doing what he is doing, he must maintain a confidential identity. And lots of artists have followed suit.

This secret identity is proving to be a costly affair for Banksy, as more and more cancellation applications are being filed against his trademarks, risking any future registrations too, and copyright protection poses a challenge to his artistic persona. Although he is reapplying and appealing for some of the cancelled marks, there will be a lot of cat and mouse chasing in the future. The impact of these cancellations will be felt on his applications all over the world. But what choice does an artist like this have? As far as the law goes, not much.

The decision of the EUIPO is to be expected and acts as a precedent for any artist who wishes to obtain perpetual protection on their works through trademark law; Banksy shouldn’t be treated any differently. Most works filed on a “proposed to be used” basis are often not revisited at all from the bad faith perspective. This decision will act a deterrent to those. On a personal note, however, and as an admirer of his work, I feel he (and many like him) deserve at least some basic protection. But the IP options are truly limited for such a unique artist.

Mahak Kansara is an Attorney registered with the Bar Council of Rajasthan, India. She is an alumna of the Institute of Law, Nirma University, Ahmedabad, India. She is currently practicing [...see more]