“The authors disagreed with progressives who argue that almost any trade provision or policy, including foreign IP protection, that helps large U.S. corporations inherently works against U.S. workers’ interests. The authors claimed the opposite—’the majority of provisions do in fact create an alignment of corporate and U.S. worker interests.’” 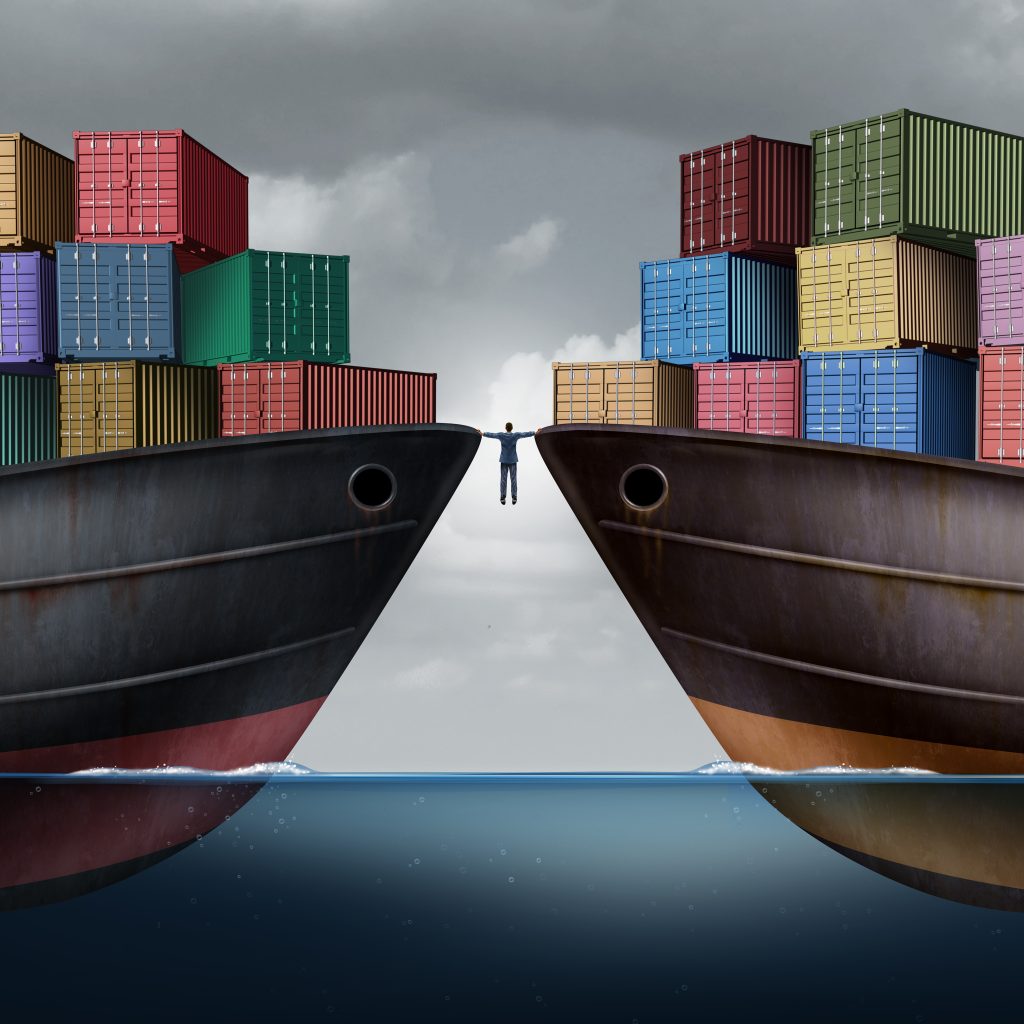 The Information Technology & Innovation Foundation (ITIF) this week released a report titled “A Worker-Centric Trade Agenda Needs to Focus on Competitiveness, Including Robust IP Protections.” The ITIF is a nonprofit, nonpartisan research and educational institute that focuses on technological innovation and public policy.

The report explained that U.S. trade policy has long been contentious. Traditionally, trade policy prioritized U.S. consumer interests. However, in response to a decline in U.S. manufacturing jobs and output due to unbalanced trade, President Biden raised a “worker-centric trade agenda,” turning away from this traditional approach.

In his shift to a “worker-centric trade agenda,” the report recommended that President Biden should reject the counsel of anti-corporate, anti-trade progressives who deny that U.S. companies’ interests align with U.S. workers’ interests. A new competitiveness-focused approach to trade policy can support both.

Specifically, this new competitiveness-focused trade approach would prioritize “market opening and trade enforcement to advance the interests of traded-sector firms in the United States, especially those in key, strategic industries that pay above-average wages.” The approach would also encourage inclusion of strong intellectual property (IP) provisions in trade agreements.

The Current U.S. Trade Policy and a Call for Change

The authors highlighted the current U.S. trade policy and addressed its flaws. For example, it noted that the U.S. trade policy prioritized U.S. consumers by minimizing the impact of unfair Chinese practices, including rampant dumping and currency manipulation, to achieve low prices for consumers.

Further, the report described the mainstream trade policy as “industry agnostic” and incorrectly placing more emphasis on market opening than on trade enforcement. The report pointed out that mainstream trade policy “largely ignored, or even disparaged, a domestic competitiveness agenda” and did not treat one industry any differently than another.

Others have also raised concerns about the mainstream trade policy, said the report. Notably, a 2020 report by the Carnegie Endowment for International Peace discussed how trade “‘policies left too many American communities vulnerable to economic dislocation and overreached in trying to effect broad societal change within other countries.’”

Thus, the report explained that a shift to a trade policy focusing on Americans in their role as workers, not just consumers, was needed.

According to the report, a competitiveness approach would better address unfair foreign trade practices that are hurting Americans in their role as workers. It would rethink long-standing trade strategies that sacrifice the U.S. market (and firms in the United States) for foreign policy goals.

Under this approach, agreements would ensure some labor and environmental protections and would strengthen digital protections, including ensuring cross-border flows of legal data.

Further, the U.S. administration would show a greater willingness to unilaterally impose tariffs against other nations whose actions violate the spirit, if not the rules, of the World Trade Organization (WTO) in ways that harm U.S. workers. The U.S. administration would also strengthen antidumping rules and insist on reciprocity in areas such as foreign direct investment and government procurement. 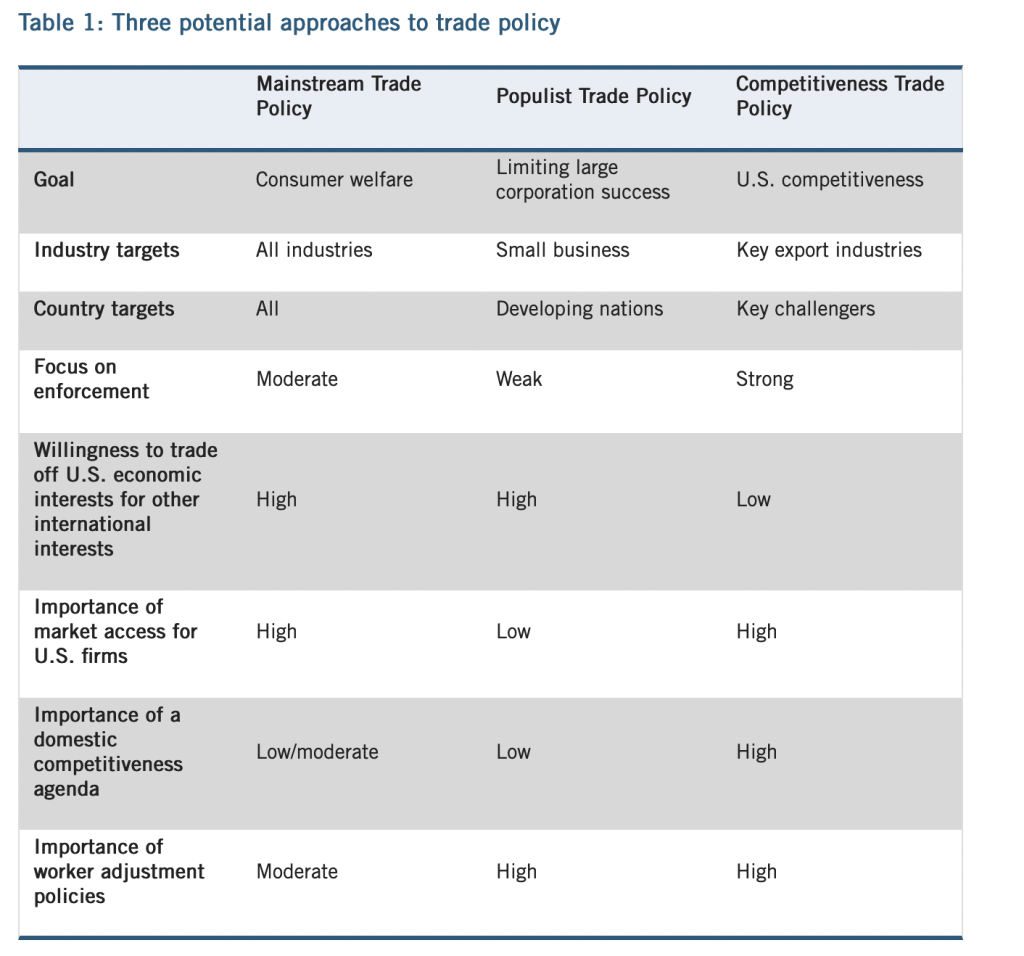 How trade agreements should deal with IP protection is a contentious topic. According to the report, most trade populists argue that IP protection only helps U.S. companies—particularly large companies—and encourages offshoring. The authors claimed that the trade populists’ argument lacked merit and that “[a]ny trade policy focused on ensuring the well-being of U.S. workers should focus on robust IP protection, as it benefits Americans in their roles as both consumers and workers.”

The report stated that “the antitrade, anti-IP populist forces” make three main arguments for limiting IP from trade policy: (1) IP has no place in trade agreements; (2) IP only benefits “big business” and the “elite”; (3) IP harms citizens of developing nations.

Anti-IP populists argue IP is irrelevant to trade and thus, incorporating IP into trade agreements could impose fundamental changes to “countries’ legal, judicial, and regulatory frameworks,” explained the report. However, the authors of the report stated that many trade agreements specifically intend to harmonize the laws of different nations and excluding IP from trade agreements ignores IP’s true economic role.

Critics such as Joe Stiglitz, Dean Baker, and Arjun Jayadev argued that “[t]he IP standards advanced countries favor typically are designed not to maximize innovation and scientific progress, but to maximize the profits of big [corporations].” The report responded that IP protections are also vital to many small-to-medium enterprises (SMEs) and help the U.S. economy and U.S. workers.

Anti-IP populists also claim that IP in trade policy hurts the masses in developing countries. The authors replied that U.S. trade policy is supposed to maximize U.S. national interests, not those of developing nations.

A Win for Corporations Can Be a Win for Workers

The authors disagreed with progressives who argue that almost any trade provision or policy, including foreign IP protection, that helps large U.S. corporations inherently works against U.S. workers’ interests. The authors claimed the opposite—”the majority of provisions do in fact create an alignment of corporate and U.S. worker interests.” This is because many trade provisions lead to greater U.S. sales, which in turn benefit U.S. jobs. For example, strong IP rights in trade agreements support workers in the many U.S. sectors that depend on IP for increased global revenues. Revenues from the “creation, delivery, and marketing” of various IP goods and services go back to millions of innovators and support staff.

The report noted that IP has an economic impact on trade, and in turn, U.S. exports and operations overseas have a major impact on the U.S. workforce and operations. The report included studies that showed that expansion abroad in affiliates of U.S. multinationals supports U.S.-parent jobs, rather than destroys them.

The report also argued that IP protections in trade agreements are important because “they make it easier to prevent foreign theft of all forms of U.S. IP” and when infringement occurs, it takes sales and jobs from the U.S. company.

Additionally, the report claimed that IP in trade policy is not only “an elitist concern reserved for big businesses.” In fact, start-ups depend on IP protection to sustain their business and IP portfolios enable start-ups and SMEs to “gain vital capital by showing potential investors a possible return on their investments.”

Recommendations for the Biden Administration

The report concluded with a series of recommendations for the Biden administration: