On Day Two of PTAB Masters™ 2022, Panelists Dig into Data Showing Fintiv Denials May Be Dead for Texas Cases

“Who are you helping by mandating that you have a second bite at the apple [and] that the PTAB rule again after the district court has already ruled? Are you helping society? – Andrei Iancu

The first panel of Tuesday’s PTAB Masters™ 2022, titled “Discretionary Denials: Has the WDTX Been Neutered?”, presented data that reveals the U.S. Patent and Trademark Office’s (USPTO’s) Patent Trial and Appeal Board (PTAB) seemingly stopped citing Apple, Inc. v. Fintiv, Inc. as a reason to discretionarily deny inter partes review (IPR) proceedings for cases with parallel litigation in the Western or Eastern Districts of Texas (WD of TX/ ED of TX) during the last four months of 2021. While the PTAB issued a larger number of institution decisions overall in those months compared with previous months, and a larger number of cases citing Fintiv, there was also a relatively low number of cases across all jurisdictions in which discretion to deny was applied based on the Fintiv analysis. 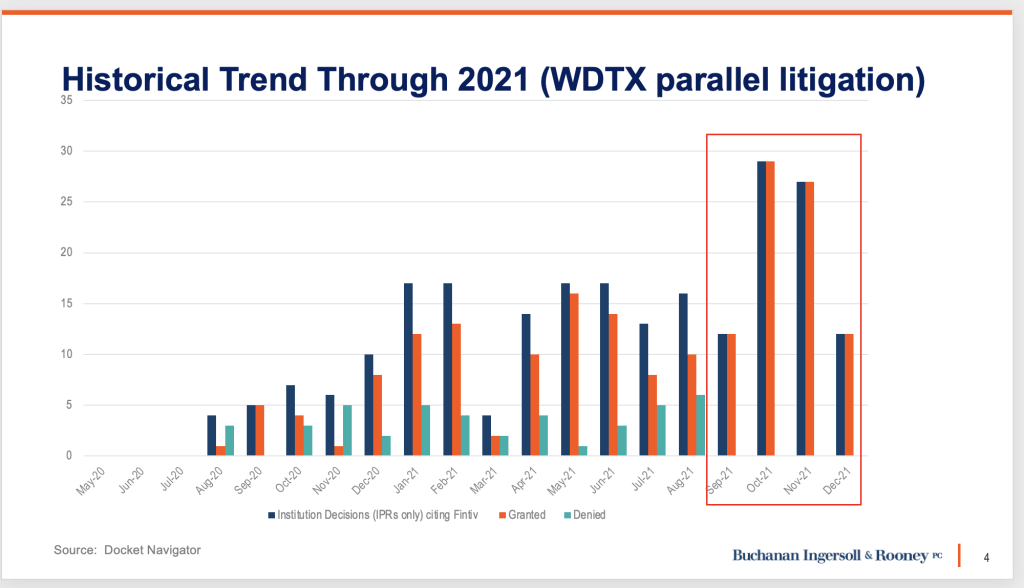 Todd Walters of Buchanan Ingersoll & Rooney, who provided the data, said he found the figures “somewhat shocking.” The other panelists were also surprised that there had been no Fintiv denials at all for WD or ED of TX cases in the last three months of 2021, although most did know that denials were down. Alison Richards of Global IP Law Group said the data makes it pretty clear that “if it’s a Fintiv argument alone, you can’t beat IPR institution by filing in the ED of WD of TX. You need something else.” But Wendy Verlander of Verlander LLP said, “It’s stark but it’s only a few months of data; I’m not sure I would declare Fintiv is dead at this point.”

Despite the revelation, most panelists agreed that the Western District of Texas is far from “neutered”, as suggested by the panel’s title. The district is still faster and more patent knowledgeable overall than other courts, and the data shows that Fintiv denials are down everywhere, so the court’s going to have “no shortage of filings,” Verlander said. 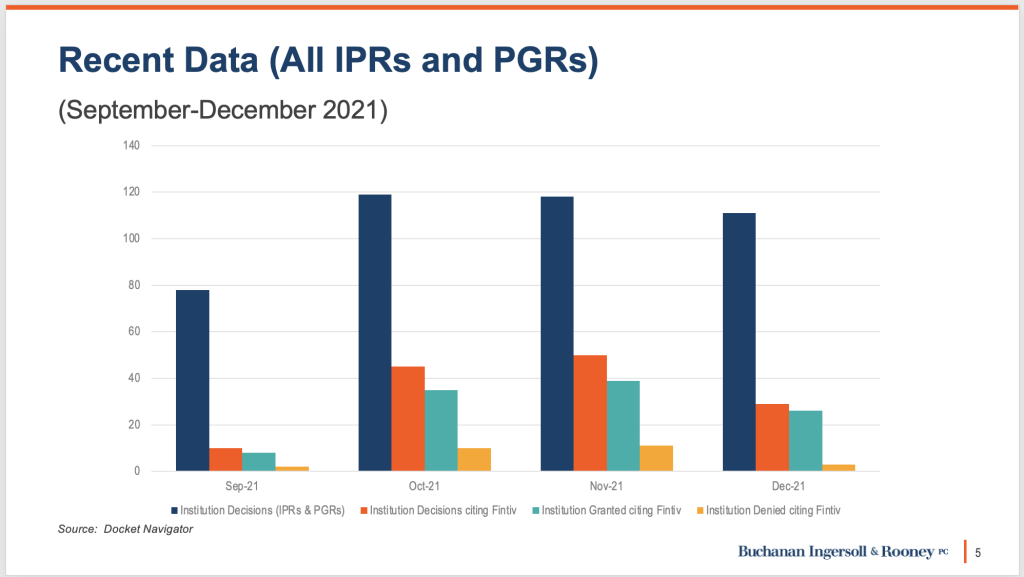 Kevin Greenleaf of Denton’s took a different view of the question posed by the title of the panel altogether, suggesting that it’s actually the PTAB that has been watered down by Fintiv practice, since it shows that the Board “has been unable to achieve the legislative goal to have the district court case stayed in lieu of the proceeding,” Greenleaf said.

However, it’s undeniable that the WD of TX has been “a victim of its own success,” said Scott McKeown of Ropes & Gray, Co-Chair of PTAB Masters™ 2022. Perhaps most damaging has been the letter sent by Senator Thom Tillis (R-NC) in November 2021 to Chief Justice John Roberts of the U.S. Supreme Court expressing serious concerns about “unrealistic trial dates” and “open solicit[ation]” of patent cases from a single judge in the Waco Division of the Western District of Texas. “There’s a real level of discomfort with what’s going on there,” McKeown said. Since the gist of the letter was “you guys need to fix this or we will,” McKeown said it’s likely that practices are going to change in that court irrespective of the PTAB issues. 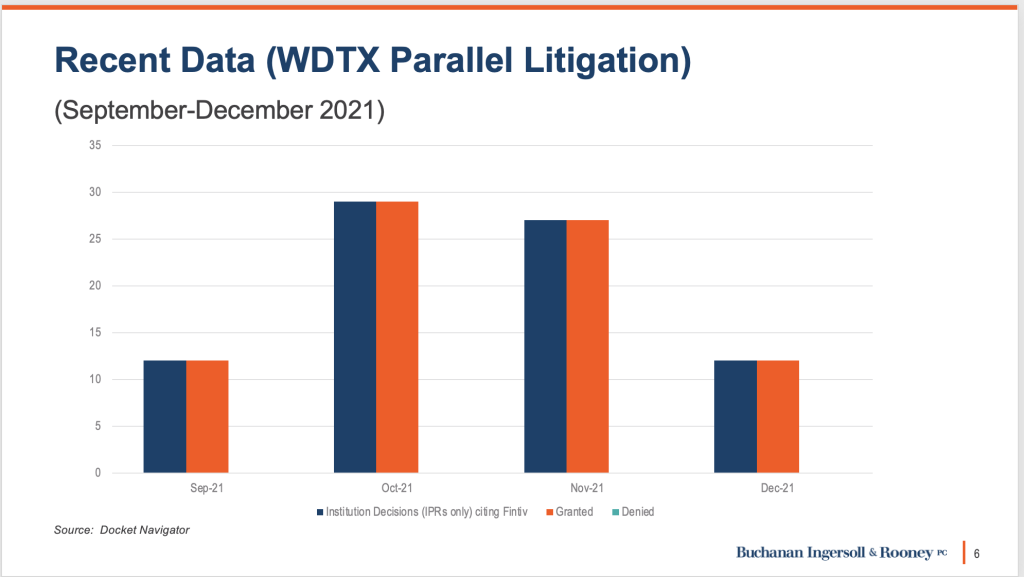 The panel next went through each of the four factors associated with the Fintiv analysis and weighed in on their importance, as well as what the data said. Unsurprisingly, the factors that seemed to matter most in decisions to invoke discretionary denial were Factor 2, proximity of the trial date to the projected date of a PTAB final written decision, and Factor 3, the amount of investment in the parallel proceeding by the court and the parties.

All speakers agreed that greater certainty and predictability is needed for the health of the innovation ecosystem and the patent system as a whole. While there has been much negative attention paid to discretionary denial practice by Congress in recent months, “there has to be a way for the USPTO to say they’re going to deny certain petitions for whatever reason,” said Gene Quinn, IPWatchdog Founder and CEO. He added:

Whether it looks like Fintiv denial practice or morphs into something else, the resources of the agency have to be taken into consideration. I would feel a lot more comfortable if we got to a place where patents are written more robustly, for a PTAB, and then consider whether examiners really do deserve some level of deference. The Supreme Court tends to agree with me, which makes me a little bit worried that I’m wrong, but I guess even a blind squirrel finds a nut every once in a while.

Day two also featured another clip from Quinn’s interview with former USPTO Director Andrei Iancu, who said that those who complain about discretionary denial practice under Fintiv need to answer the question, “who are you helping?” He continued:

Who are you helping by mandating that you have a second bite at the apple [and] that the PTAB rule again after the district court has already ruled? Are you helping society? Then what you’re saying is you do not trust your independent Article III adjudications, and that’s a much bigger problem than the patent system.

Iancu said that the Fintiv decision combined with the ruling in Sotera Wireless give the USPTO discretion to provide the petitioner with a choice of whether to pursue their case in district court or the PTAB. “I don’t think folks should pursue both of them unless there’s a really good reason,” Iancu said. “If the district court rules before the PTAB, my view is that the PTAB should act with humility and restraint in the face of that adjudication that already took place in the district court. Just pick one.”

The PTAB Masters™ 2022 program will run through Thursday, January 27, and is presented by IPWatchdog®, and co-chaired by Scott McKeown and Gene Quinn. To join us for more on the Patent Trial and Appeal Board from the viewpoint of both the patent owner and petitioners challenging patents, register for free here.