“The Billion Dollar Code is the most engaging, detailed and well-documented invention dispute to be depicted on film or television. Its importance cannot be overstated. Creators, investors and others need to better understand the invention process and the legal system that underlies it.” 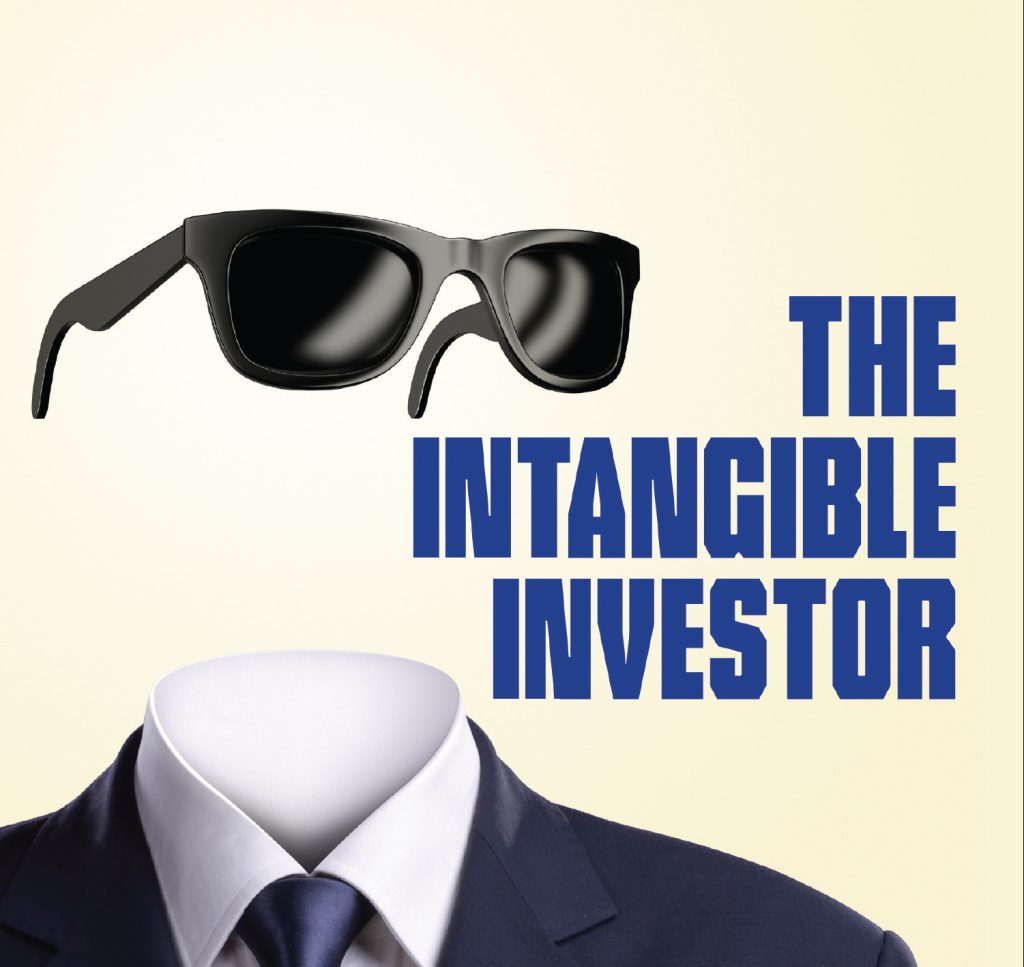 A new crime drama, The Billion Dollar Code, is a fascinating breakthrough mini-series that illustrates the legal challenges of inventions and inventors in a world where technology giants can refuse to acknowledge the source of ideas they do not control.

The popular four-part Netflix mini-series achieves uncanny success not only in depicting an epic legal battle but doing it over four plus hours in German with subtitles and an abundance of algorithm detail and trial preparation. It is reminiscent of Chernobyl, HBO’s award-winning series that turned the complex series of events and failures, both technical and human, leading to a nuclear core meltdown into award-winning entertainment.

The Billion Dollar Code conveys the creative spirit of the time in post-Wall Berlin, where freedom was abundant with possibilities and business aspirations were secondary. This series is for anyone interested in innovation, business, justice or history. It also is for people who love a good crime drama where the diminutive but spritely good guys (the “Davids vs. Goliaths”), despite their discoveries and enthusiasm, do not prevail. (No spoiler alert is necessary here.)

The plot follows two inter-connected timelines. The newly free Berlin of the early 1990s was reminiscent of San Francisco in the late 1960s, before there was a Silicon Valley. The city was finally rid of the divisive restraints of communism, and anything goes was the attitude, at least among some creators. In that spirit, a group of young hackers and art students had founded the ART+COM collective to explore the leading edge of computer programming and digital art. They had developed a planet browser in 1991 which was used to get funding from Deutsche Telekom in 1993 to start the successful development of Terravision. Terravison (terra as in terrain) software, developed on the most powerful Silicon Graphics computers, allowed viewers to fly through space, virtually.

The Battle for Google Earth

As depicted in the series, Terravision was less a company than a group of idealistic, club-going, art-hacking believers, who, with the right people and tools, could make great things happen. 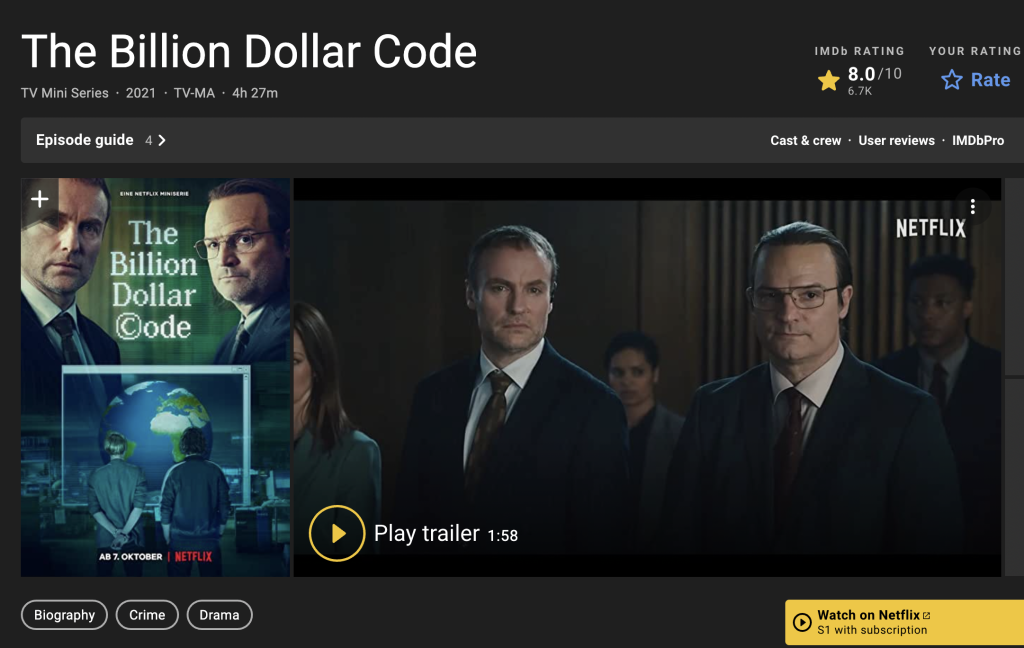 The other story line revolves around the 2014 patent infringement dispute between ART+COM and Google, alleging that TerraVision was used to develop Google Earth.  The movie dramatizes the lawsuit which dragged on until 2017. Episode 4 is almost entirely about the trial. The script reproduces parts of the actual court statements to avoid coming into conflict with Google. Baker & Botts partner Scott Partridge acted as A+C lead counsel on the case. In the actual case the Court of Appeals for the Federal Circuit confirmed the district court’s decision.

This series is not a documentary and creative license is employed, with key parts changed or fictionalized in the spirit of better conveying the truth. In the series, the ART+COM beginnings were dropped, reports Wikipedia, and several of the real persons and stakeholders were joined to a smaller cast with the fictional characters. The series was developed for Netflix where it first aired in October 2021. Included on Netflix, although difficult to find, is an additional 28-minute documentary, The Making of the Billion Dollar Code. Here, ART+COM members join the cast and crew of the show to discuss its factual basis and the development of the court case (this add-on is definitely worth watching).

Audience response to the series, primarily the depiction of a three-year legal battle between ART+COM and Google, has been nothing short of terrific. Rotten Tomatoes did not have enough reviews to give the series a critic’s score, but it awards The Billion Dollar Code an audience rating of 100%. IMDB shows it as 4 out of 5 starts on 6,108 votes. Even the Google audience rating comes in at 4.9 on 245 reviews.

What about this dispute resonates with viewers? First, The Billion Dollar Code is an extremely well written narrative, with the story pivoting around sub-plots about the relationship of the two prime innovators and their strong personalities, and the freedom of early 1990s in post-Communist East Germany. The acting is also first-rate, and Google Earth is a product that almost every person with access to a computer knows and has used. Finally, the depiction of how an idea gets from the minds of a rag-tag group of digital creators to a universal product is illuminating. (It brings to mind Flash of Genius about the Robert Kearns windshield wiper dispute against Ford and other automobile manufacturers but goes further in its deconstruction of the creative process and legal battle.)

Patent attorney Gaston Kroub, in his review of The Billion Dollar Code in Above the Law, admits he was fascinated at the surprisingly accurate depiction of trial and technical developments, even if some of the scenes and characters had to be condensed.

ART+COM Studios, a descendant of ART+COM, still exists, “working for international clients from industry, culture and research.” Wikipedia (often accessed by on Google search) does not provide a page for the current company or link to its website.

“We have held on to our pioneering spirit and drive to research,” the company says in a statement. “We have created numerous new formats and made inventions in the areas of ART, COMMUNICATION and RESEARCH. ART+COM continues to deepen its own research activities. The basis for these innovations is almost always the same: intrepid clients from industry and culture, who are looking to push boundaries, and to create something new and groundbreaking together with us.”

While the production, writing and acting teams get so much right in this truly laudable series, they apparently failed to communicate with the marketing people. The title logo for The Billion Dollar Code depicts the C of Code with a circle around it, apparently to suggest a copyright symbol – not the best image for a series based entirely on a patent case.

A movie convention viewers must also forgive is the way the case is discussed openly by the lead witnesses with counsel in bars and restaurants near the courthouse in Wilmington, Delaware. It may make for a more interesting backdrop for exposition, but I doubt counsel and plaintiffs were quite so cavaliere at the time. Several “ah-ha!” moments in the series are also to be forgiven by inventors who know that off screen discovery is seldom that dramatic.

“The Billion Dollar Code is a remarkably pertinent piece because over the last several years Big Tech’s fangs have only become bigger and scarier,” writes Tanul Thakur in The Wire. “The ‘garage nerds’ of yesterday have become the robber barons of today, meddling in elections, dehumanizing workers, selling our data, imprisoning us in a world that seems to offer no respite or escape.”

“The makers [of TBDC] are aware of this; they rightfully mock Google’s motto, ‘Don’t be Evil’, multiple times. The miniseries also reveals that Google has had a long pattern of patent infringements. The Billion Dollar Code, then, not just bats for ART+COM but numerous small firms that never got their due, that got so comprehensively swallowed by the tech behemoth that there is no evidence of their bare bones.”

In hindsight, there was probably not that much that ART+COM could have done differently to prevent losing control, although there are attorneys on both sides who would likely argue otherwise. It could have perhaps been advised earlier and been better capitalized, which may have led to a better outcome. (In the series a meaningful settlement does not appear viable.) ART+COM could also have been less enamored with the state-of-the-art computing tools bestowed on it by SGI, and the informal affirmation from Google, which at the time seemed sufficient reward for Terravision’s efforts.

The Billion Dollar Code is the most engaging, detailed and well-documented invention dispute to be depicted on film or television. Its importance cannot be overstated. Creators, investors and others need to better understand the invention process and the legal system that underlies it. This series is a way for those who are not IP professionals, as well as many who are, to learn how to communicate more effectively about ideas before they become assets. The series is a cautionary tale, but it also conveys an appealingly romanticized notion that is attractive to programmers and other creators, whether they are pushing software boundaries or making movies. Birthing something incredible at the right moment in time for a good purpose may be sufficient reward for some. It is not for others.

Go here to watch The Billion Dollar Code on Netflix, or to see the series trailers.