“It will be interesting to see if the FDA and other regulators further accelerate their approval programs to keep up with the current global healthcare crisis, and whether such institutions will be disrupted to the point of more permanent institutional change.”

In Part I of this post, we provided an update on three lead pioneers in the mRNA IP space, Moderna, BioNTech and CureVac. In this post, we profile Sanofi, Arcturus, eTheRNA and other mRNA companies, and offer conclusions.

It is unclear whether and to what extent Sanofi plans to pursue development of the Translate pipeline, announcing in September that despite positive results in clinical trials, it doesn’t plan to pursue the development of a messenger RNA vaccine against Covid-19 that it had co-developed with Translate, because the therapy will come too late to market. Also, on its website, Sanofi only lists 2 mRNA candidates in its pipeline, one previously developed with Translate for the A/H3N2 strain of the influenza virus and the other a solid tumor therapy developed with BioNTech, presumably under a 2015 Collaboration and License Agreement. Sanofi is also collaborating with BioNTech to support BioNTech’s manufacture of its COVID-19 vaccine.

On June 29, 2021, Sanofi announced that it will invest over €400 million annually in an mRNA-based vaccine Center of Excellence. The Center will reportedly work to accelerate the development and delivery of next-generation vaccines by integrating end-to-end mRNA vaccine capabilities with dedicated R&D, Digital, and Chemistry, Manufacturing and Controls (CMC) teams.

Also, in November 2021, Sanofi signed a deal with Baidu, a Chinese tech giant, to utilize its AI algorithm for mRNA-based therapies.

Since April 2021, Arcturus’s pipeline has increased from 4 total mRNA-based candidates to 5, 3 of which are in the clinic (up from 2). Arcturus still has not filed any IPRs or oppositions, at least as the public-facing challenger. eTheRNA’s pipeline has similarly increased from 3 total mRNA-based candidates to seven, one of which is in preclinical studies. eTheRNA is still listed as filing eight oppositions (against CureVac’s patents) and no IPRs.

Abogen Biosciences, an mRNA startup based in Suzhou, China, has been making fundraising news all year, including recently announcing that it has crossed the $1 billion threshold in series financing. The company, which has reportedly been very secretive since its founding in 2019, apparently has a COVID-19 vaccine candidate (ABO-028M) set to go into phase III clinical trials in Mexico, Indonesia and Nepal. The drug reportedly has greater stability at warm temperatures than the Moderna and BioNTech vaccines.

A number of significant changes have taken place over the past nine months of 2021 relating to the competitive landscape. The two lead—and only—mRNA products on the market have already generated tens of billions of dollars in revenues for Moderna and BioNTech, with such revenue levels certain to continue into 2022 and potentially rise as the companies distribute booster shots and develop vaccines for the Omicron variant that each company says could be ready in months. The two companies’ efforts resemble a modern day “space race” to determine who can develop and distribute vaccines faster and more widely. The combination of global need, market competition, and advanced technological tools for drug discovery and development (including artificial intelligence (AI), CRISPR, and other technologies) is spurring innovation in the mRNA space at an exponential rate. 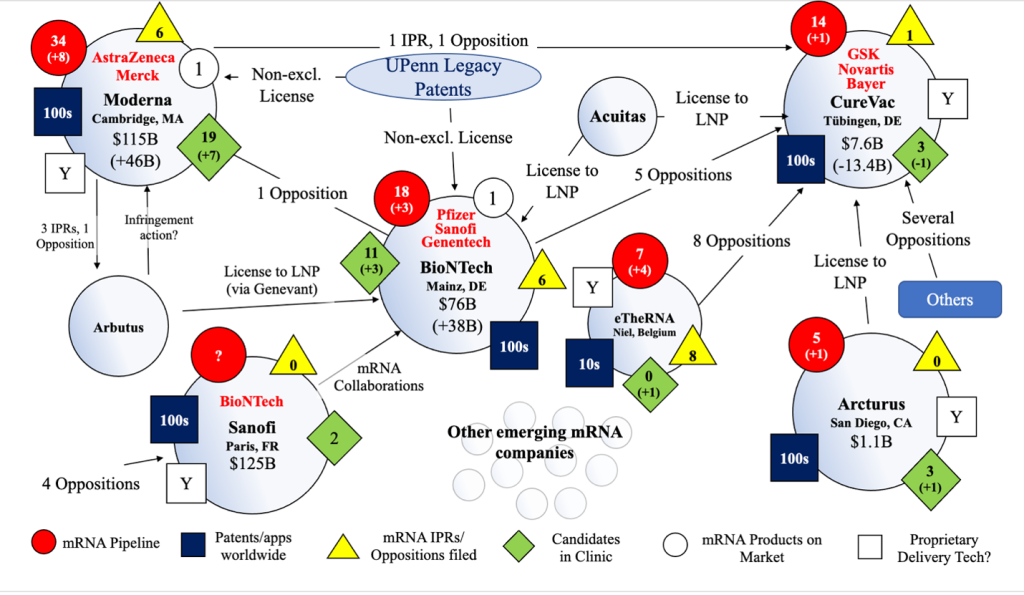 Figure 4: Overview of mRNA IP and Competitive Landscape as of December 13, 2021. N.B. the above overview and other information provided is in a constant state of flux and subject to significant ongoing change (e.g., market capitalization, opposition and IPR filings, litigations, pipelines, alliances, etc. are all constantly changing and will continue to do so on an ongoing basis).

This could all lead to major growth for these and other well-positioned mRNA market players especially if the predictions of BioNTech founders Ugur Sahin and Ozlem Tureci that “in 15 years, one-third of all newly approved drugs will be based on mRNA” holds true.

While Moderna and BioNTech have established themselves as the clear market leaders, CureVac has been forced to downshift based on its disappointing results in the clinic, leaving it without a commercial product to date. Perhaps its collaboration with GSK, including for a second generation COVID-19 vaccine candidate, will change the company’s fortunes in 2022. This seems likely if the new vaccine is able to show higher efficacy on par with the Moderna and BioNTech vaccines, demonstrating proof of concept of CureVac’s distinct technology and paving the way for new indications based on that platform. CureVac could also be viewed as an attractive acquisition target since the company is currently valued at one third of what it once was while still boasting a huge patent portfolio and undoubtedly deep expertise and know-how relating to mRNA.

Sanofi made major strides in mRNA this year as the first big pharma company to gain access to the space through significant acquisitions (versus collaboration agreements) of Translate Bio and Tidal Therapeutics. The Translate deal alone has given Sanofi turnkey mRNA pipelines, development programs, patent portfolios, and know-how. How Sanofi exactly plans to utilize those assets is presently unclear, but we will undoubtedly learn more in 2022. As demonstrated by its acquisitions and formation of its mRNA-based vaccine Center of Excellence, Sanofi appears to be committed to mRNA and here to stay.

As for big pharma giant Pfizer, it certainly sees mRNA as a key part of its future, but without an apparent homegrown mRNA program (six of the seven mRNA products in its pipeline are in collaboration with BioNTech), it is unclear how it plans to level up beyond its collaboration with BioNTech. A merger or acquisition involving BioNTech would solidify Pfizer’s firm position in the vaccine space while allowing the opportunity for diversification into new indication areas unique to mRNA. While that would be a blockbuster deal, it would not necessarily change much for Moderna in the near term, since Moderna is already holding its own competing against a BioNTech-Pfizer collaboration in the COVID-19 vaccine space.

Additionally, Moderna is pivoting into gene editing and diving deeper into its mRNA “information molecules” niche without focusing on small or large molecules, distinct from BioNTech’s approach of remaining open to utilizing modalities outside of mRNA to achieve its therapeutics goals. This distinction could be the key that puts Moderna on track to developing an even newer class of therapies (e.g., mRNA utilized in combination with CRISPR for genetic disease therapies), even while BioNTech continues on a more traditional pharma path, potentially alongside or as part of Pfizer. Keep an eye on Moderna’s acquisition activity this year involving companies that utilize CRISPR and AI-driven technologies.

Startups Strive to Be Part of the Race

As these pioneers position themselves for market dominance, numerous startups are pouring into the space with potentially promising therapies. Importantly, as these companies innovate novel mRNA sequences for such therapies, they face a major hurdle in deciding which delivery technology to utilize. Delivery technology, like the lipid nanoparticle (LNP) delivery technology utilized in the Moderna and BioNTech vaccines, is difficult to develop in effective formulations, and several of the pioneers have secured broad patents covering such formulations. This requires startups to confront the issue of whether to in-license LNP technology, design around existing LNP patents (which can be difficult because of their breadth), or innovate new technologies and file for patent protection of their own. Of course, the LNP patent landscape is not only an issue for startups, but also for the larger players like Moderna, which failed to invalidate key LNP patents owned by Arbutus and now potentially faces a patent infringement lawsuit or a large payout under a licensing agreement or settlement.

The mRNA market landscape is sure to evolve significantly in 2022 as the aforementioned and other companies continue to innovate, compete, merge, acquire, and develop critical therapies based on a new technological platform. It will be interesting to see if the FDA and other regulators further accelerate their approval programs to keep up with the current global healthcare crisis, and whether such institutions will be disrupted to the point of more permanent institutional change, such as accelerating approvals for other breakthrough therapies for other diseases that affect smaller populations in the mRNA space and elsewhere. Such a shift would indicate that the COVID-19 pandemic may be viewed historically as a tragedy that ultimately advanced global healthcare and the ecosystem that supports it.

Vivian Y. Tian With a degree in chemical engineering and intern experience at one of the world’s largest pharmaceutical companies, Vivian Tian, an Associate at Rothwell Figg, assists companies in the biologic, chemical, [...see more]

Sheena X. Wang Sheena X. Wang is an Associate at Rothwell, Figg, Ernst and Manbeck, P.C. She focuses her practice on assisting companies in the pharmaceutical and biotech fields with patent prosecution, post-grant [...see more]