“Before governments…say ‘yes, we should waive TRIPS,’ I believe [they] have a responsibility to prove to us that a) it’s necessary and b) it will achieve its intended purpose. They need to tell us why nobody has exercised the compulsory license flexibility, and why the least developed countries have not achieved a single vaccine yet, even though TRIPS does not apply to them at all. ” – Andrei Iancu 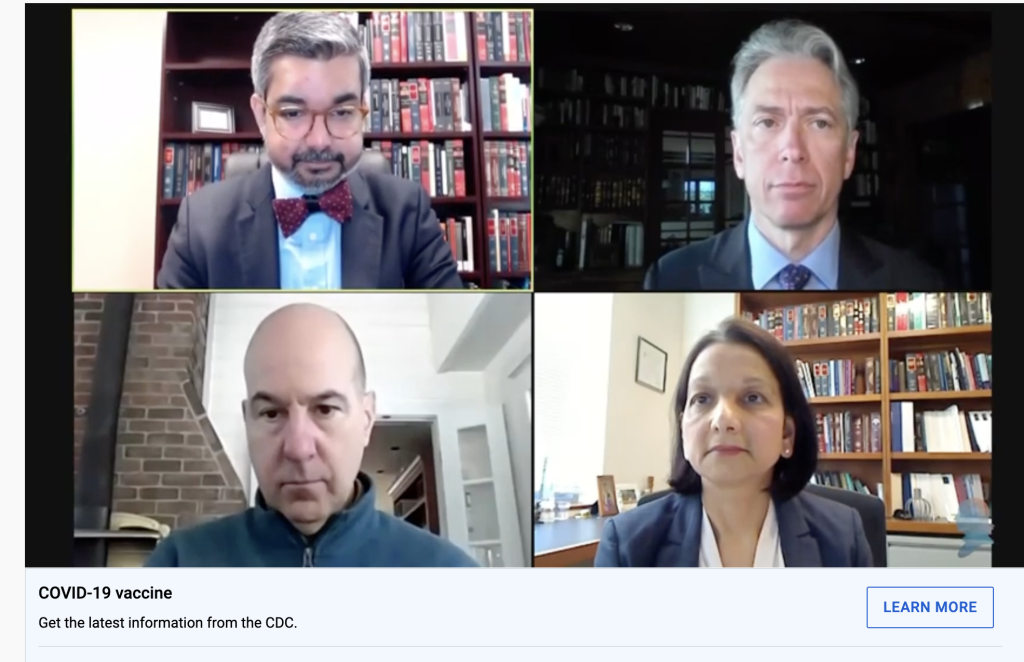 A webinar hosted on Tuesday, January 12, by The Federalist Society’s Regulatory Transparency Project featured former U.S. Patent and Trademark Office (USPTO) Directors Andrei Iancu and David Kappos, as well as Duke University Professor of Law and former USPTO Administrator of the Office of External Affairs Arti Rai, discussing the proposal to the World Trade Organization (WTO) to waive IP rights under the Trade-Related aspects of Intellectual Property Rights (TRIPS) Agreement for certain COVID-19 technologies. While all three panelists agreed that the IP waiver discussion has become a distraction that will not solve the fundamental problems, Iancu and Kappos were especially passionate that the precedent set by the U.S. government’s decision to back the proposal could do very real harm, rather than good. Kappos said that “the U.S. government is now complicit—aiding and abetting—in distracting attention from the real issues and letting humans die so that it can pursue some other objective,” and Iancu later agreed, saying, “The concern I have is the current push to waive IP rights goes in exactly the wrong direction and is going to do more harm—help kill more people, to be blunt– than save people. To me that is the tragedy of the current proposal.”

In May of last year, U.S. Trade Representative Katherine Tai said that the United States will back a 2020 proposal by India and South Africa to waive intellectual property protections under TRIPS. The proposal calls for the suspension of international protections for patents, copyrights, industrial designs, trade secrets and proprietary materials, “in relation to the prevention, containment, or treatment of COVID-19 until widespread vaccination is in place globally and the majority of the world’s population has developed immunity.” Since then, the administration has reiterated its commitment to engaging in text-based negotiations on the waiver, though not much progress has been made.

It’s Not All or Nothing

Tuesday’s discussion was moderated by Texas A&M University School of Law Professor Saurabh Vishnubhakat, who asked the panelists to explain how much of an obstacle patent rights are posing in the current pandemic. While the short answer from all three panelists was none, Rai said that “intellectual capital” does come into play in the debate, and—while advocacy groups are in many ways still fighting the “last war” in this space, namely, HIV/AIDS, where patent rights were very much at issue—there are some “potentially very tricky questions with trade secrets” and how to transfer know-how when it comes to the COVID crisis. “It may be that patents can serve as a vehicle for transfer of that know-how voluntarily via contracts,” Rai said. “There are entities that are claiming they want to collaborate with Pfizer and Moderna in some lower-middle income countries, that have not secured such collaborations as of this date, and one of the questions is what’s going on there, and I think we should talk about that as we progress.”

Rai attempted to temper some of Iancu’s and Kappos’ comments throughout the discussion, seeming to call for an acknowledgment that the private sector will have to compromise in some way, at some point. While she did not condone giving away IP full stop, Rai pushed back on the “false dichotomy” being touted by some. She explained:

I do think there are mechanisms that have been demonstrated in other contexts of tiered pricing, of ensuring that knowledge flows occur only to trusted parties; it’s not an all or nothing game where you absolutely have to keep everything in one silo in one company OR have everything go open source; that’s a false dichotomy. The sophisticated questions are questions of how we’re going to problem solve without going to either of those false dichotomies.

While COVAX was a well-intentioned example of a Public-Private-Partnership (PPP) attempt to solve some of the problems, it ultimately failed because it wasn’t able to secure the necessary contractual agreements, as the developed countries went outside of COVAX, Rai said. This raises the question of whether funding efforts like Operation WARP Speed could have come with some kind of nudge toward knowledge transfer, she added.

Kappos, however, argued that the PPPs we need have “nothing to do with trade secrets and patents.” Instead, government and industry need to cooperate in areas such as moving refrigeration equipment to developing countries, providing transportation infrastructure to get vaccines to villages in least developed countries, making sure enough vials and syringes get where they need to be, and that enough medical professionals and information are distributed and shared with people in order to get them interested and motivated to take the vaccine. “It has nothing to do with disclosing trade secrets or getting free licenses under patents,” Kappos said.

Ultimately though, whatever the way forward is, IP rights must be part of the solution. Iancu warned that “the next health crisis is around the corner” and world leaders should be working on it now. “A plan needs to happen now, because it takes time, so we can help regions around the world to develop their own capabilities to weather the next health crisis and not beg entities like COVAX or somebody else for the transfer of actual produced medicines,” Iancu said. “Governments need to be involved, but you absolutely, categorically, need the private sector to work together toward that end, and none of that will happen at all if you’re proposing to waive IP – it’s the exact opposite that you need to do.”

Why Isn’t Waiver Already Being Invoked?

Vishnubhakat asked the panelists their views on existing flexibilities within TRIPS and whether they might be sufficient to solve the current problems. Rai said there is some discussion in academic and activist circles about whether a compulsory licensing mechanism—which is already an option under TRIPS—or waiver could work with regulatory agencies that, as a consequence of the marketing authorization mechanism, do have trade secret protected information (Chemistry, Manufacturing and Controls, or CMC information) in the regulatory dossiers that have been submitted to them. “I don’t think it should be made freely available by regulatory agencies, but there’s an interesting question as to whether there can be some payment for that information with the participation of the firms that have submitted it,” Rai noted. “Could we set up a carefully regulated marketplace that would charge for that sort of information so that in the future we could have more global manufacturing?” While the specifics of such a proposal are “sticky”, Rai admitted, Kappos agreed it might be a constructive solution for the future.

Iancu again pointed out that the current waiver proposal would still only impede such efforts, rather than help, and noted an underreported reality of the current situation, namely, that, in addition to existing flexibilities like compulsory licensing that have not been used, TRIPS already does not apply at all to least developed countries through 2033:

Some of those countries actually have medicine and vaccine manufacturing capabilities. An example of this is Bangladesh. TRIPS doesn’t apply at all, currently. Why, then, isn’t Bangladesh making vaccines? So, if people think that the waiver of TRIPS at large solves the issue, well, we have an example in point right here. In addition, every other country that is subject to TRIPS can itself on its own waive TRIPS if it believes it is necessary and will achieve its purpose. So, before governments, like the United States government, say “yes, we should waive TRIPS,” I believe governments have a responsibility to prove to us that a) it’s necessary and b) it will achieve its intended purpose. They need to tell us why nobody has exercised the compulsory license flexibility, and the least developed countries, including Bangladesh, have not achieved a single vaccine yet even though TRIPS does not apply to them at all.  This discussion needs to be an evidence-based, fact-based analysis and I haven’t seen any of the governments make the evidence clear. They have a responsibility to at a minimum make sure that whatever they do here does not do any harm.

Rai conceded that the waiver debate “has become a distraction.” It was intended by the activists to “shock everyone to the table,” she said, “but it hasn’t worked that way and I do hope we move towards thinking about mechanisms for relatively voluntary know-how transfer that is compensated.”

The Bell That Can’t Be Unrung, or Light at the End of the Tunnel?

Kappos took a more dire view of the situation, saying that the administration’s decision to back the proposal is “like the bell that can’t be unrung.” While it previously was unimaginable that the United States would “even grudgingly” waive IP rights, “you can be assured for all eternity going forward that every time there’s a public health crisis of an important nature, the first thing you’re going to hear is ‘of course we should waive IP, and the United States has done it before, so [we] should be jumping on that bandwagon,” Kappos said. Additionally, it sends a bad message to U.S. innovators about their value and to international competitors, who are quick to point out the hypocrisy of U.S. cries for stronger IP protection in light of such concessions.

Iancu again urged the administration to provide evidence that the waiver will work, noting that he’s willing to take the idea at face value as well-intentioned and an attempt to save lives, but “show us the evidence that what you’re proposing here will actually help to achieve those goals for this crisis and for those down the road. Show us that in fact it’s not going to hurt.”

Rai said that she was not as certain that a simple commitment to engage in text- based negotiations “limited to vaccines and not to other interventions like pills or monoclonal antibodies,” to her understanding, would have the “enormous precedential effects that Dave and Andrei think it will,” though it is “definitely a distraction.” She also said that she has some hope that things might be moving in the right direction voluntarily, noting that, in the antiviral pill space, some companies have recently entered into tiered pricing activity. “That is the end state that I would hope we’d all want to achieve,” Rai said. “It’s not all doom and gloom.”