“The decision in this case is incredibly concerning. As Judge O’Malley explains in dissent, the district court’s failure to appreciate the difference between clinical efficacy and therapeutic efficacy means any determination as to the sufficiency of the written description is necessarily flawed.” – Gene Quinn 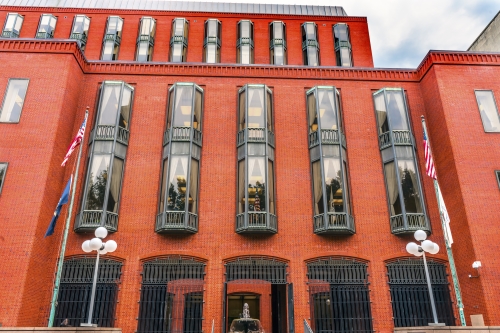 The U.S. Court of Appeals for the Federal Circuit (CAFC) earlier today affirmed a district court ruling that Biogen International’s patent for a method of treating multiple sclerosis (MS) was invalid for lack of written description. Judge O’Malley dissented, arguing that the district court clearly erred in its finding that Biogen was judicially estopped from drawing a distinction between clinical and therapeutic effect, and that the entire analysis “might well change” if the case was remanded “for reconsideration of the record with the understanding that the patent is not about clinical efficacy” but therapeutic effect.

The patent at issue is U.S. No. 8,399,514, titled “Treatment for Multiple Sclerosis,” which claims priority to U.S. Provisional Application 60/888,921 (the ’921 Application), filed on February 8, 2007. The ‘514 patent claims a method of treating MS using the drug dimethyl fumarate (DMF). Biogen sued Mylan for patent infringement in 2017 under the Hatch-Waxman Act, after Mylan filed an Abbreviated New Drug Application (ANDA) seeking to market a generic DMF product for the treatment of MS.

The core issue on appeal was whether the specification filed in 2007 supported the claims that issued in the ‘514 patent. Specifically, the question the majority zeroed in on was whether “the original specification describes ‘possession’ of the claimed therapeutically effective DMF480-dose limitation to treat MS.” The district court chiefly based its finding of invalidity on the lack of guidance regarding the proper therapeutic dosage of DMF.  The sole paragraph in the specification relating to DMF-dosage reads:

The CAFC majority explained in its discussion of this language that, while the ’514 Patent “features multiple claims that are drawn exclusively to the specific DMF480 dose, [] the specification’s focus on basic research and broad DMF-dosage ranges show that the inventors did not possess a therapeutically effective DMF480 dose at the time of filing in 2007.” The problem, according to the majority, is that this does not support the ‘512 patent claims. Representative Claim 1 of the ‘512 patent reads:

The majority added that “[a]n inventor need not ‘prove that a claimed pharmaceutical compound actually achieves a certain result. But when the inventor expressly claims that result, our case law provides that [such] result must be supported by adequate disclosure in the specification.’ Nuvo, 923 F.3d at 1384.”

Thus, the CAFC concluded that the district court did not clearly err in its finding that Mylan had met its burden to show by clear and convincing evidence that the specification does not adequately support the patent’s claims.

Judge O’Malley dissented, primarily because she said the district court’s conclusion in a footnote that Biogen was judicially estopped from explaining the difference from clinical and therapeutic efficacy constituted an abuse of discretion under Fourth Circuit law. (Martineau v. Wier, 934 F.3d 385, 393 (4th Cir. 2019)). Biogen had repeatedly attempted to remind the district court that the written description inquiry should focus on therapeutic efficacy, rather than clinical, in response to Mylan’s multiple contentions that the ‘514 patent was invalid for lack of written description because it lacked Phase III clinical efficacy data. As a result of the judicial estoppel ruling, the district court legally erred in its analysis of Federal Circuit written description precedent, said Judge O’Malley. She added:

In my view, the district court’s refusal to acknowledge the difference between therapeutic and clinical effects evinces a fundamental misunderstanding of what is claimed—and, thus, what requires written description support—in the ’514 patent.

In response to this main argument of the dissent, which the majority addressed as an “ancillary” issue, the CAFC said that “when viewed through the lens of the ’514 Patent, this is not a legal issue, but a factual one.” As the finder of fact, the district court did not find it “necessary or appropriate to distinguish between therapeutic effects and clinical efficacy based on the specification’s definition of ‘therapeutically effective dose’ and the record before it, and such a determination was not clearly erroneous,” said the majority.

Judge O’Malley further noted that the specification does expressly disclose the claimed DMF480 dose, in the “sole paragraph” it cited, and the majority’s ruling that this is insufficient establishes another erroneous requirement. She explained:

The majority’s decision affirming the district court partially rests on the fact that the ’514 patent only mentions the claimed DMF480 dose once. Maj. Op. at 16. But the majority cites no case law (and I know of none) for the proposition that the written description requirement demands that a patentee recite a claim element repeatedly to pass written description muster. The majority does not, and cannot, deny that the claimed DMF480 dose is expressly disclosed. To the extent the majority’s opinion may be read to establish a requirement that a claim element must be disclosed multiple times, I dissent from that holding as well.

Because the district court’s analysis would arguably be different if it were to “adjust the lens through which it considers the evidence and testimony,” Judge O’Malley said she would have remanded the case for “reconsideration of the record with the understanding that the patent is not about clinical efficacy—it is about therapeutic effect.”

IPWatchdog CEO and Founder Gene Quinn called the decision “incredibly concerning” and said he would not be surprised if it’s eventually revisited by the en banc court:

The decision in this case is incredibly concerning. As Judge O’Malley explains in dissent, the district court’s failure to appreciate the difference between clinical efficacy and therapeutic efficacy means any determination as to the sufficiency of the written description is necessarily flawed.

“[T]he district court’s refusal to acknowledge the difference between therapeutic and clinical effects evinces a fundamental misunderstanding of what is claimed—and, thus, what requires written description support,” O’Malley wrote in dissent.

“[T]he district court’s errant refusal to acknowledge the difference between therapeutic and clinical efficacy is evident throughout [the opinion].”

Judge O’Malley is precisely correct. The written description requirement applies to the claimed invention, and one has to question whether the district court understood the science involved despite Biogen’s repeated attempts to educate the court regarding the critical distinction between therapeutic and clinical efficacy. Sadly, the majority found this fundamental misunderstanding of the underlying science and misunderstanding of the claims as “ancillary” to the question of whether the specification provided written description support for those claims. A breathtaking misapplication of 35 U.S.C. 112(a). How is it possible to fundamentally misunderstand the claims and the science and still appropriately evaluate the specification for written description support? Answer: It is not possible. Judges Reyna and Hughes are wrong, Judge O’Malley is correct, and this case should be destined for rehearing and reversal, either by the panel or en banc.