“As in Cedar Point Nursery, the simple fact that Petitioner retains his right to license his work and exclude the general public from utilizing his work… says nothing about whether Respondent appropriated for itself a three-year, royalty-free license to utilize, reproduce, and display the copyrighted work in direct violation of Petitioner’s right to exclude.” – Jim Olive SCOTUS petition 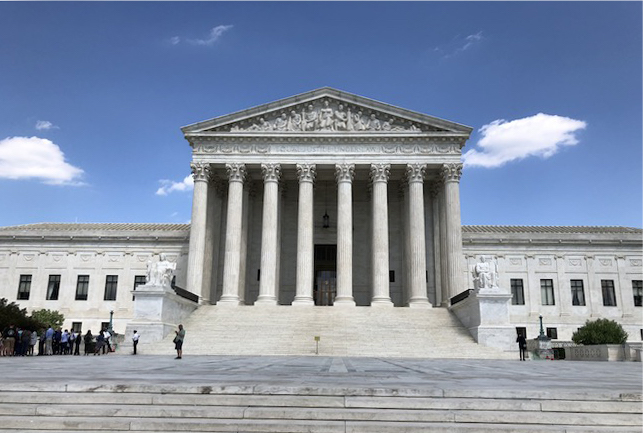 On November 15, Houston-area aerial photographer Jim Olive Photography filed a petition for writ of certiorari asking the U.S. Supreme Court to take up an appeal from the Texas Supreme Court, which had denied Olive’s copyright claims against the University of Houston System on sovereign immunity grounds. In the petition, Olive requests that the Supreme Court simply grant certiorari, vacate the lower decision and remand for reconsideration of the issues in light of the Court’s decision this summer in Cedar Point Nursery v. Hassid, which was issued just a few days after the Texas Supreme Court ruled against Olive.

Cedar Point Nursery Should be Applied

Olive argues that, under Cedar Point Nursery, the University of Houston’s unauthorized use of aerial photographs of the city’s skyline on its website constitutes a per se taking that should be recompensed pursuant to the Fifth Amendment’s Takings Clause and the Fourteenth Amendment, which extends due process obligations on the U.S. federal government onto state governments as well. In Cedar Point Nursery, the Court held that California state law giving labor organizations a “right to take access” to property owned by an agricultural employer for the purposes of soliciting union support constituted a per se physical taking.

“Cedar Point Nursery… equated appropriation of a ‘right to invade’ a property interest with appropriation of the author’s ‘right to exclude,’” Olive argues in the petition for cert. Because the right to exclude is fundamental to the rights afforded creators under the Copyright Act, Olive contends that the Court’s ruling on per se physical taking should be extended as well to his Takings Clause claim. The petitioner notes that the Court’s 2015 decision in Horne v. Department of Agriculture extended Takings Clause protections to forms of personal property, not simply real property. Further, Horne considered intellectual property to be within the scope of personal property as it cited to the Court’s 1882 decision in James v. Campbell, which stated that the government’s grant of a patent “confers upon the patentee an exclusive property in the patented invention which cannot be appropriated or used by the government itself.”

The relationship of patent law and copyright law are such that the exclusive use of copyrighted works should be treated as essentially the same property right as the exclusive use of patented technologies for Takings Clause purposes, Olive argues. Besides Horne, Olive cites to a string of cases in the years following James which found that the right to exclude even public entities from infringing patent rights was “authoritatively declared,” “so indisputably established as to need no review of the authorities sustaining it,” and “long been settled.” Olive also notes that the Supreme Court in Oil States Energy Services v. Greene’s Energy Group (2018) clarified that its holding on patent rights “should not be misconstrued as suggesting that patents are not property for purposes of… the Takings Clause.”

Following Olive’s lawsuit filed in Texas state trial court, the University of Houston filed a plea arguing that state copyright infringement was not a “taking” under either the Texas State or U.S. Constitutions, and that the school had not waived sovereign immunity. The trial court denied this plea, but a state appellate court reversed and dismissed the case after finding that the school’s copyright infringement did not constitute a taking “because it did not take away Olive’s right to use, license, or dispose of the underlying creative work.” The Texas Supreme Court affirmed this ruling, holding that copyright infringement doesn’t result in a physical taking of property as copyright is intangible and because the university’s actions didn’t destroy Olive’s own copyright to the photos.

Physical Possession, Destruction of Property Interest Not Required for Per Se Takings Claim

Olive contends that Cedar Point Nursery shows that a plaintiff can establish a per se taking by a government entity even when there is no physical possession of the property interest or any destruction of the property right. The government taking in that case was the California state requirement that agricultural employers allow labor organizers access to the employer’s work facilities for up to three hours per day on up to 120 days per year. The Court in that case noted that “even if the Government physically invades only an easement in property, it must nonetheless pay just compensation,” a proposition the Court cited from Kaiser Aetna v. United States (1979). While the government taking in Cedar Point Nursery involved physically entering the employer’s facilities, Olive argues that the Court’s analysis in that case was focused on the same right to exclude that is vital to copyright owners under copyright law.

A remand under Cedar Point Nursery would be outcome determinative, Olive contends, due to the Court’s guidance on how a “right to invade” should be analyzed as a government takings claim. Olive notes that the Texas Supreme Court admitted that copyright infringement “invades a statutorily defined province guaranteed to the copyright holder alone.” The failure to adequately respect the “central importance” of the right to exclude was also at issue in Cedar Point Nursery, which came to the Supreme Court after the U.S. Court of Appeals for the Ninth Circuit had narrowly applied the Court’s takings jurisprudence to find that the state law at issue there wasn’t a government taking. The petition explains:

Like the decision below, Cedar Point Nursery did not involve a claim that the regulation completely deprived the owners of all rights to their property or entirely destroyed its economic value… But unlike the decision below, the fact that the landowners in Cedar Point Nursery retained their rights (1) ‘to exclude third parties’ who were not union organizers from their property and (2) to full possession and use of their property (subject to this government easement) was irrelevant to the Court’s per se takings analysis… As in Cedar Point Nursery, the simple fact that Petitioner retains his right to license his work and exclude the general public from utilizing his work… says nothing about whether Respondent appropriated for itself a three-year, royalty-free license to utilize, reproduce, and display the copyrighted work in direct violation of Petitioner’s right to exclude.

State Infringement in the Spotlight

The petition comes during a time of increased attention to infringement of IP rights by state actors. In March 2020, the Supreme Court issued its decision in Allen v. Cooper, finding that Congress lacked the authority to abrogate state sovereign immunity from copyright infringement suits and invalidating the Copyright Remedy Clarification Act as unconstitutional. A similar statute abrogating state sovereign immunity in the patent context was also invalidated by the Court in 1999’s Florida Prepaid Postsecondary Education Expense Board v. College Savings Bank. Since Allen, both the U.S. Patent and Trademark Office and the U.S. Copyright Office have studied the extent of IP infringement by state entities and its effects on IP owners, with the Copyright Office concluding that state infringements create legitimate concerns for copyright owners that should be addressed by Congress.