“More than 77% of the 20,000 most common English words identically match an EU Trade Mark registration—and the few remaining words carry negative connotations. This proportion increases to 91% when translational similarities are taken into account.” 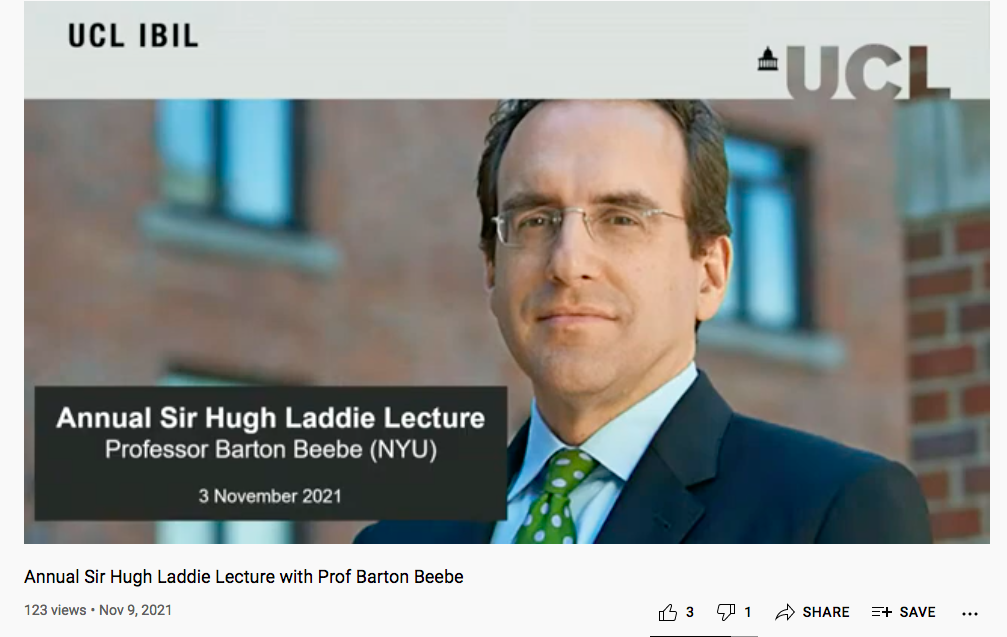 Is the European trademark system a victim of its own success? This was the question posed by Professor Barton Beebe of NYU School of Law at the Annual Sir Hugh Laddie Lecture at UCL-IBIL on November 9.

Beebe argued that “trademark depletion is the most significant challenge the trademark system will face this century” and that, contrary to conventional wisdom, the supply of words for trademarks is not inexhaustible.

Along with Professor Jeanne C. Fromer of NYU School of Law, he has already conducted research on USPTO data, which showed “high levels of trademark depletion.” For example, about 75% of English words in daily use already identically match a registered U.S. trademark, as well as 55% of common surnames. In other words, he said: “All the best words are already claimed.”

Beebe and Fromer have now turned their attention to the EU, which he described as a “microcosm” of the global trademark system, due to the 24 official languages and the integration of national markets in the E.U. He concludes that the position is even worse in the E.U. than in the U.S.

Based on analysis of the nearly 2 million trademark applications in the published European Union Intellectual Property Office (EUIPO) dataset, Beebe said that more than 77% of the 20,000 most common English words identically match an EU Trade Mark (EUTM) registration—and the few remaining words carry negative connotations (such as “difficult”, “kill”, “least”, “poor”, “sorry” and “worst”). This proportion increases to 91% when translational similarities are taken into account.

The position is particularly bad in certain classes, such as Class 25, where more than 80% of common words already have identical matches, rising to 94% once close similarities are included. The result, he said, is that it is becoming harder to find new brand names and applicants are resorting to longer, less punchy marks and those consisting of multiple words.

The trend is similar when languages other than English—particularly Romance languages such as French, Italian and Spanish—are studied. And it is particularly pronounced with words that are shared by several languages: 54 out of 55 such universal words are already taken in the EU (the exception being “republican”). Consequently, an increasing proportion of single word trademarks are made up of coined terms.

The result is more “trademark crowding,” with lots of similar trademarks for identical or similar goods belonging to unaffiliated entities. This trend is backed up by data on opposition rates and the number of opponents at EUIPO.

Is crowding a problem? The findings show, said Beebe, that “there are real costs to the public domain to granting trademark rights” and that “supply is no longer adequate to meet all the demand.” He speculated that we are now in “a peak trademark condition.”

While there are no easy answers to the problem, he suggested several options that could be explored to address it. These include introducing ex officio review of applications (something the E.U system does not have at present), abandoning the notion of translational similarity, requiring narrower specifications, being stricter on use with an intent-to-use requirement (which does not currently exist in the E.U.) or enhanced enforcement of use, or charging a higher rent for shorter or more common words.

None of these are simple solutions, said Beebe, but the data suggests that something needs to be done: “Depletion and crowding may prove to be among the most intractable problems the global trademark system may face this century.”

The lecture can be viewed on YouTube. Details of previous Sir Hugh Laddie Annual Lectures are on UCL’s website.