“The proposals [Amazon has] made over the years do not strengthen the bill, they strengthen Amazon’s hand in avoiding the bill. I for one am not going to stand by and watch this watered down any further, we need to move on this.” – Senator Dick Durbin 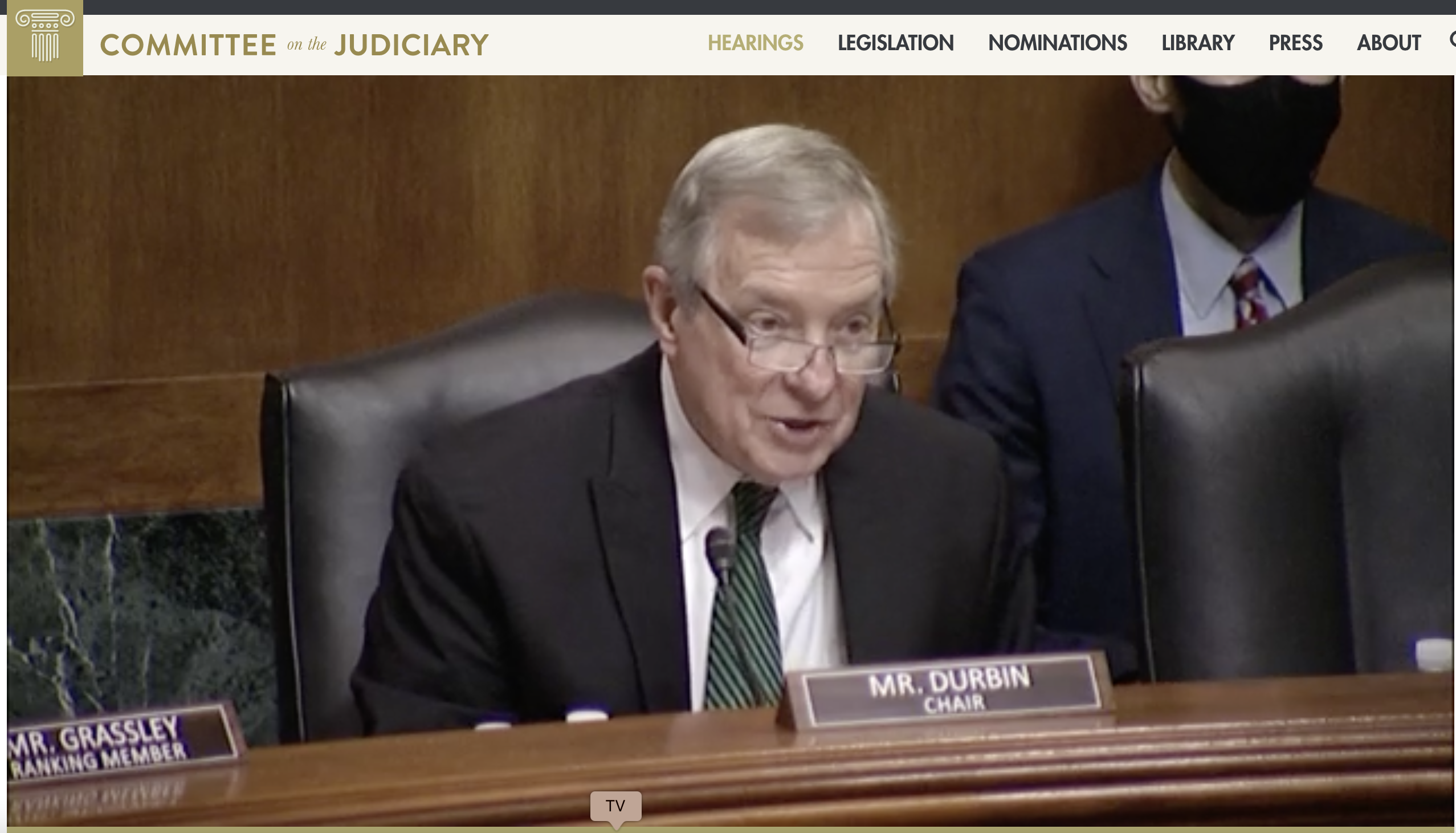 Senator Dick Durbin (D-IL), Judiciary Committee Chair, introduced the hearing with a video that said the sale of illicit products could result in more than 5.4 million net job losses by 2022. Industry representatives and law enforcement officers in the video explained that platforms like Amazon facilitate and enable the sale of counterfeits and have resulted in exponential growth in organized retail crime. Durbin said he has been working on the issue since 2008, when representatives of Home Depot first told him that Home Depot-branded power tools were being stolen and resold online. Durbin introduced a bill that year to address the issue and the marketplaces reassured him that they were taking care of it, but 13 years later, the problem is much worse.

In one experiment, the Government Accountability Office bought a sample of 47 consumer products from third-party sellers on leading e-commerce websites to see how many might be counterfeit; 20 of the 47 products purchased were fake. Durbin suggested that: 1) sellers should be verified; 2) that if a product turns out to be fake or stolen or dangerous, consumers should be able to find the seller and report it; and 3) that if a consumer orders a product from one seller online and the order is filled by another, the consumer should be informed. To this end, he has introduced the Inform Consumers Act with Senator Bill Cassidy (R-LA), which is co-sponsored by Senators Chuck Grassley (R-IA), Mazie Hirono (D-HI), Thom Tillis (R-NC), Chris Coons (D-DE), Raphael Warnock (D-GA) and Marco Rubio (R-FL). In the House, Representative Jan Schakowsky (D-IL) is sponsoring the bill with Gus Bilirakis (R-FL). The legislation aims to require greater transparency for third-party sellers of consumer products in online platforms.

‘Late to the Party’ 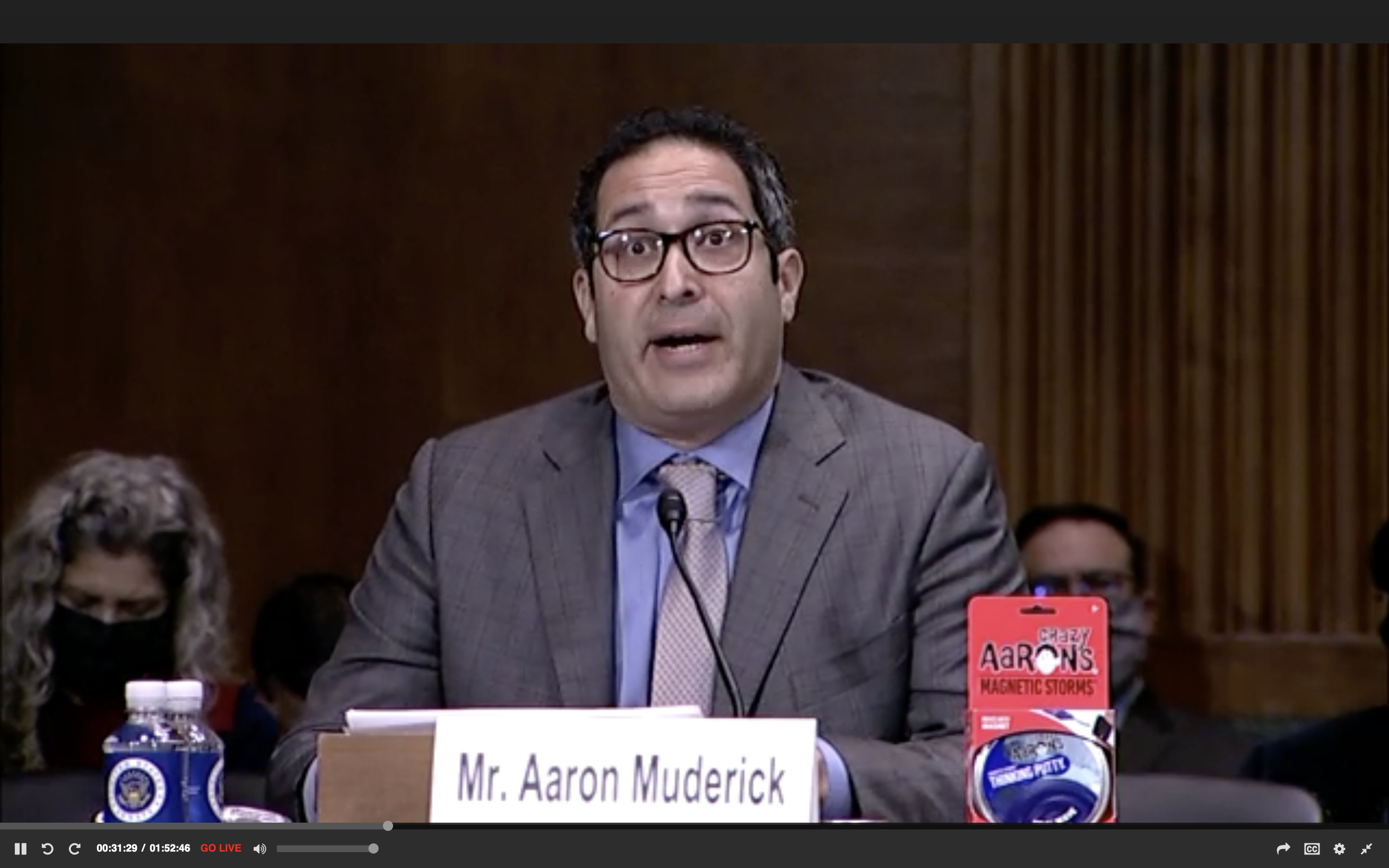 Aaron Muderick, Founder and President of Crazy Aaron’s, a toy manufacturer in Pennsylvania, testified that the unanticipated challenges presented by online platforms can be unmanageable for a small business. The enormous resources required to police the marketplaces, limited recourse to claim damages or protect IP, and safety violations are the key concerns. Counterfeits of Muderick’s magnetic putty product, Thinking Putty, do not meet federal safety requirements, but they remain for sale online nonetheless. They often contain “loose, as received, high-strength hazardous magnets,” which are illegal in children’s products and can cause serious internal injuries and death if ingested.

But K. Dane Snowden, President & CEO of the Internet Association, reminded the Committee about the many benefits of online platforms and e-commerce and that “counterfeiting, retail theft and organized crime are not new problems, nor were they created by online platforms and marketplaces.” Snowden said that it will take a combined effort of platforms, law enforcement, big box retail, brands and rights holders, state attorneys general to fight the problem. While he recognized the responsibility of online platforms, Snowden said, “we are on the right path to addressing these issues” and underscored that internet companies do not permit counterfeits on their platforms and have implemented a variety of tools to help combat fakes. 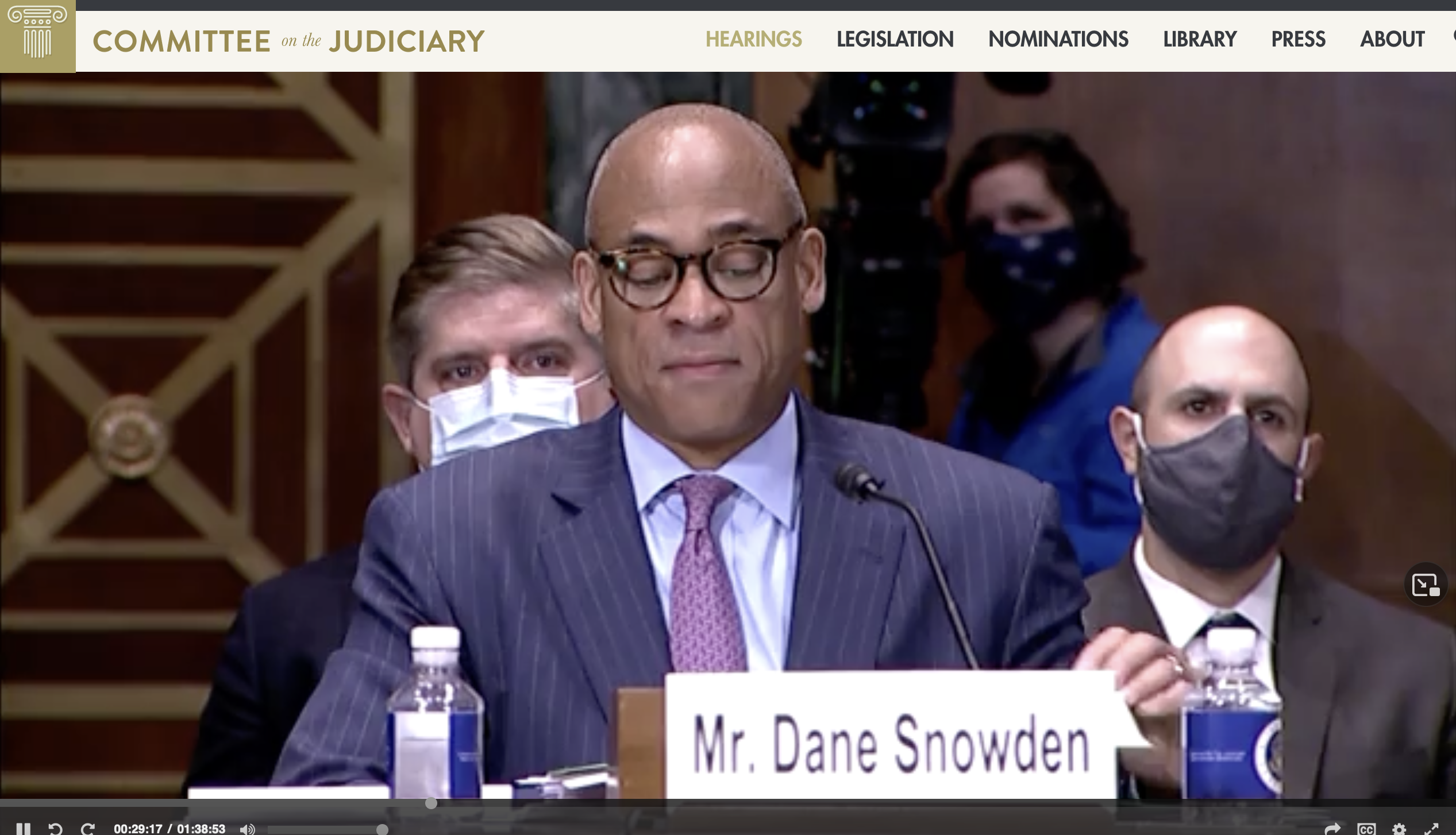 Snowden said brand owners are in the best position to identify counterfeits and pointed to Amazon’s free reporting tool launched last year, in which more than 500,000 brands were enrolled. The brands enrolled reported a 99% reduction in suspected infringements, and less than .01% of products sold on Amazon last year received a counterfeit complaint from a customer. eBay and Etsy have had similar successes with proactive efforts, but the Internet Association supports additional actions, such as 1) a national framework that clearly preempts the patchwork of state and local laws governing the internet so that federal law is the sole source of regulation for internet companies, and 2) information collection proposals that do not overburden small businesses.

Durbin snapped back at Snowden during questioning, countering his suggestion that internet companies are on the same side as consumers and that they have taken sufficient action. He said:

I would say my observation is that Amazon is late to the party, but we welcome them as a guest. They have said recently, “we look forward to working with lawmakers to further strengthen the bill.” The proposals they have made over the years do not strengthen the bill, they strengthen Amazon’s hand in avoiding the bill. I for one am not going to stand by and watch this watered down any further, we need to move on this. We’re going to test your statement that they’re on our side.

Muderick acknowledged that brand owner protection mechanisms have helped to curb trademark infringement significantly, but illicit sellers now simply copy the product without using the marks and still do not comply with safety standards. This means companies don’t have standing to use the brand protection tools offered by the platforms, but the problem remains. “On a monthly basis, we would send in lists of products which did not infringe our marks but were in violation of federal safety standards, and on a monthly basis we would follow up with the same list of not only the same product but in many cases the same exact listing that had not been taken down,” Muderick said in response to a question from Senator Mazie Hirono on the topic. 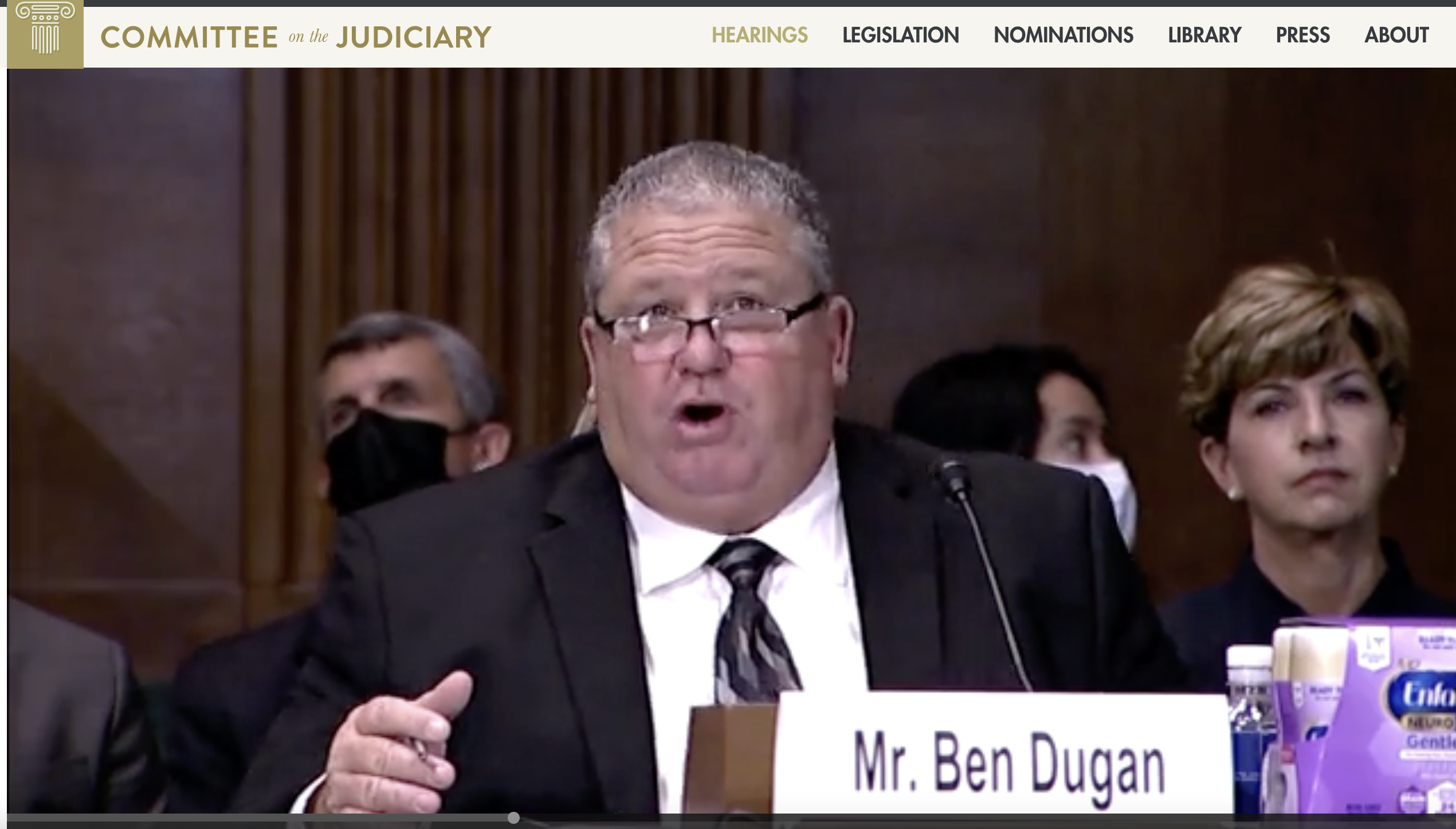 Ben Dugan, Director of Organized Retail Crime and Corporate Investigations for CVS Health, impressed upon the senators that the crimes CVS sees are largely connected to organized crime and facilitated by unregulated online marketplaces. Reported violent events at CVS have doubled in the last year, there is an organized retail crime event reported from a CVS store every three minutes, and two-thirds of those involve threat of violence, actual violence or a weapon. Infant formula is a favorite target of retail crime organizations targeting CVS, and they blatantly disregard safety protocols for the products, such as manipulating expiration dates and not storing at proper temperatures before selling it online. In another example, organized crews have stolen millions of dollars in diabetic test strips, counterfeited them, and then sold them online to unsuspecting patients with diabetes across the country. Dugan said there has not been a lot of progress on improving transparency to the level needed to prevent crime and he supports the Inform Consumers Act.

Kari Kammel, Assistant Director, Education and Outreach; Senior Academic Specialist, Center for Anti-Counterfeiting & Product Protection and Adjunct Professor of Law at the College of Law Michigan State University, recommended continued and expanded information sharing, in addition to supporting the Inform Consumers Act and the SHOP SAFE Act. She said consumers don’t have enough information when they’re purchasing online and that online platforms need to do more proactively to combat the problems.

When Platforms are the Thieves

Senator Amy Klobuchar (D-MN) raised the issue of platforms like Amazon knocking off successful products sold on their sites and preferencing their brands over others. Muderick provided one example in which Amazon recently began selling an Amazon Basics version of his company’s product that was a knock-off and also violated a number of their trademarks – while they were able to get it taken down quickly using Amazon’s Brand Registry, he said “it speaks to an underlying problem you’ve brought up here.”

Senator Mike Lee (R-UT) expressed concerns about the burden the Inform Consumers Act might impose on smaller online marketplaces. The bill would require verification of high-volume third-party sellers within three business days and continuous annual certification of all sellers. The definition of a high-volume seller is set fairly low, at above the required sales of between $5,000 and $7,000 annually. While Amazon might be able to do such verification using technology, smaller platforms would be hard-tasked.

In both the Inform Consumers and SHOP SAFE Acts, sellers also would be required to publicly disclose the sellers’ names and contact information. Lee said this could have privacy and safety implications for small sellers working out of their homes, for instance, and could also give larger companies the ability to poach sellers.