“I do want us to also be mindful about not inadvertently harming U.S. inventors or innovators in the process, and making sure we’re not weakening patent rights or creating administrative pitfalls for their proper enforcement.” – Senator Chris Coons on the Pride in Patent Ownership Act 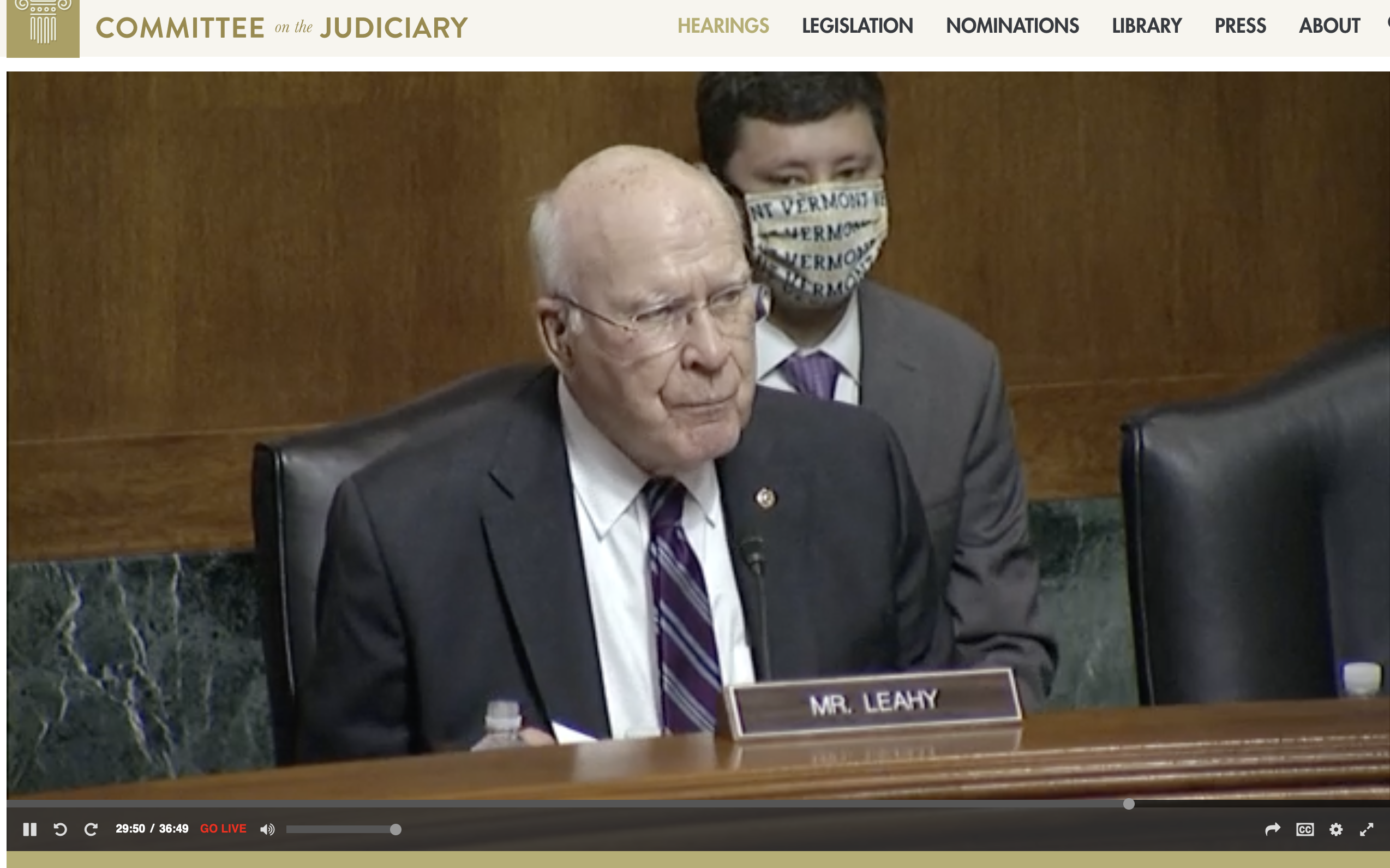 During a hearing of the Senate Judiciary Committee’s IP Subcommittee today, Senators Chris Coons (D-DE) and Mazie Hirono (D-HI) were the only senators present to question the Pride in Patent Ownership Act’s (PPOA’s) approach to penalizing patent owners who fail to record accurate ownership information within 90 days after the issuance date.

The hearing included testimony from four witnesses on the topic of the PPOA introduced by Senators Patrick Leahy (D-VT) and Thom Tillis (R-NC) in September. Leahy explained in his introduction that the same fundamental principle of disclosure that underpins issuance of a patent should extend to patent ownership information. There is presently no requirement that ownership information be publicly available after a patent issues.

The PPOA would require a patent owner to record updated ownership information with the U.S. Patent and Trademark Office (USPTO) when a patent changes hand. The information would be publicly available and searchable in a USPTO-maintained database. If patent owners fail to record information in a timely manner, they would not be eligible to obtain enhanced damages for willful infringement for the time period the information was not recorded. Leahy argued that the current system results in costly litigation just to discover who is accusing a party of patent infringement. “The lack of clarity about patent ownership information also brings about inefficient licensing discussions,” Leahy added.

IPWatchdog Founder and CEO Gene Quinn pointed out in his analysis of the bill that the PPOA approach is “one-sided”: “Predictably, the PPOA only addresses ownership of patents, and does not seek to provide true transparency that would be a two-way street identifying those funding and benefiting from PTAB challenges,” Quinn wrote. 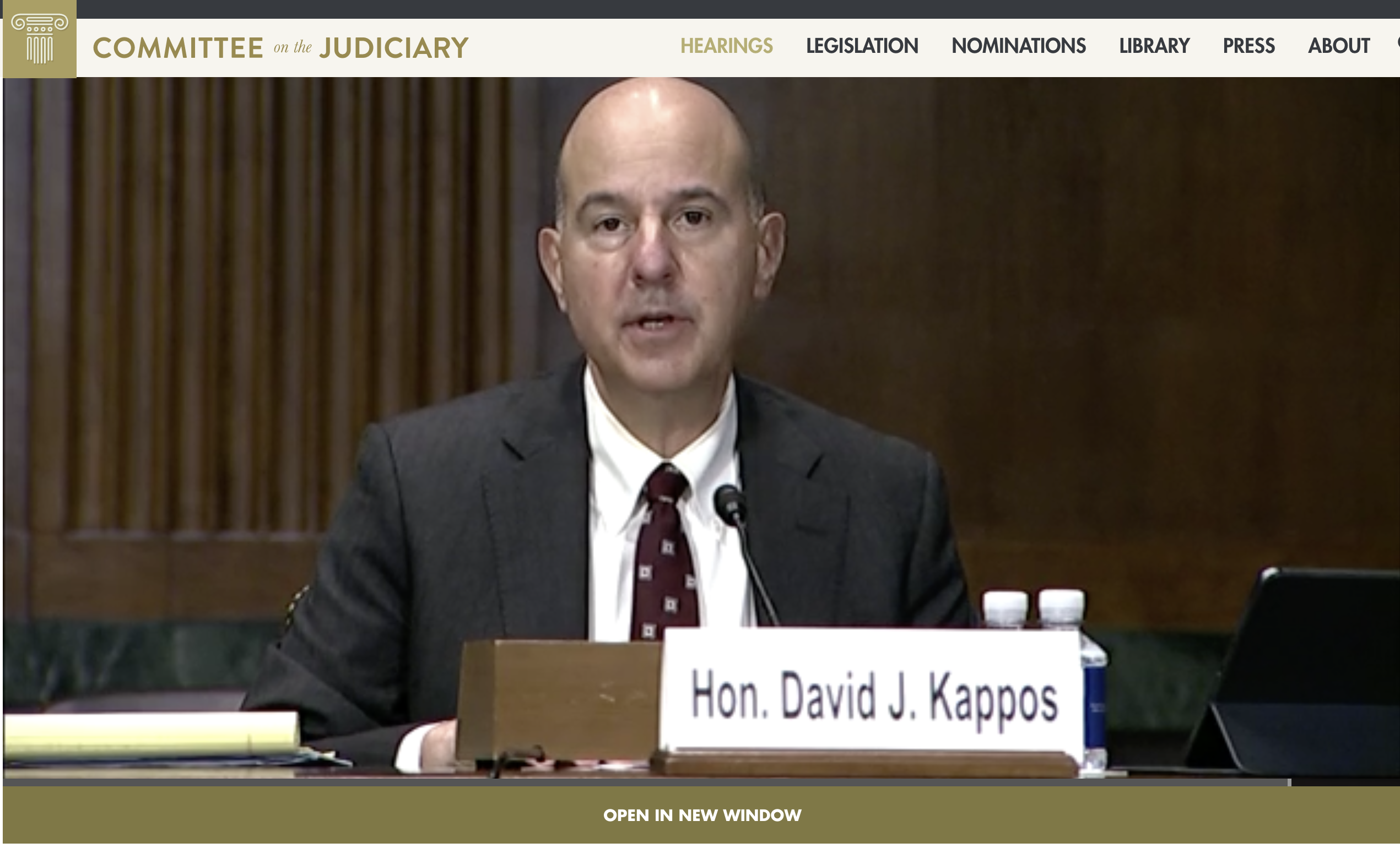 During the question and answer period, Senator Leahy asked witness David Kappos of Cravath Swaine & Moore, and the former USPTO Director, to expand on his written testimony’s reference to national security concerns around foreign governments’ funding of applications. He explained that the current system represents a “possible instability of the funding source for the USPTO” because filings coming from overseas that are funded by nation-states pay the cost to file a patent and prosecute a patent application – a subsidized cost that is meant to be recouped by maintenance fees – but then they don’t pay those maintenance fees. “That’s another instability of the system that’s going to come about,” Kappos said. The PPOA’s disclosure requirements for patent filings funded by government actors and its grant of authority to the USPTO on this point would go a long way toward solving this problem.

However, Kappos also addressed some of the imbalances in the proposed bill, both in his written testimony and during the hearing.  In particular, the penalty for non-infringement—”loss of recovery for willful infringement—doesn’t feel connected to the
recordation requirement,” Kappos wrote in his testimony. 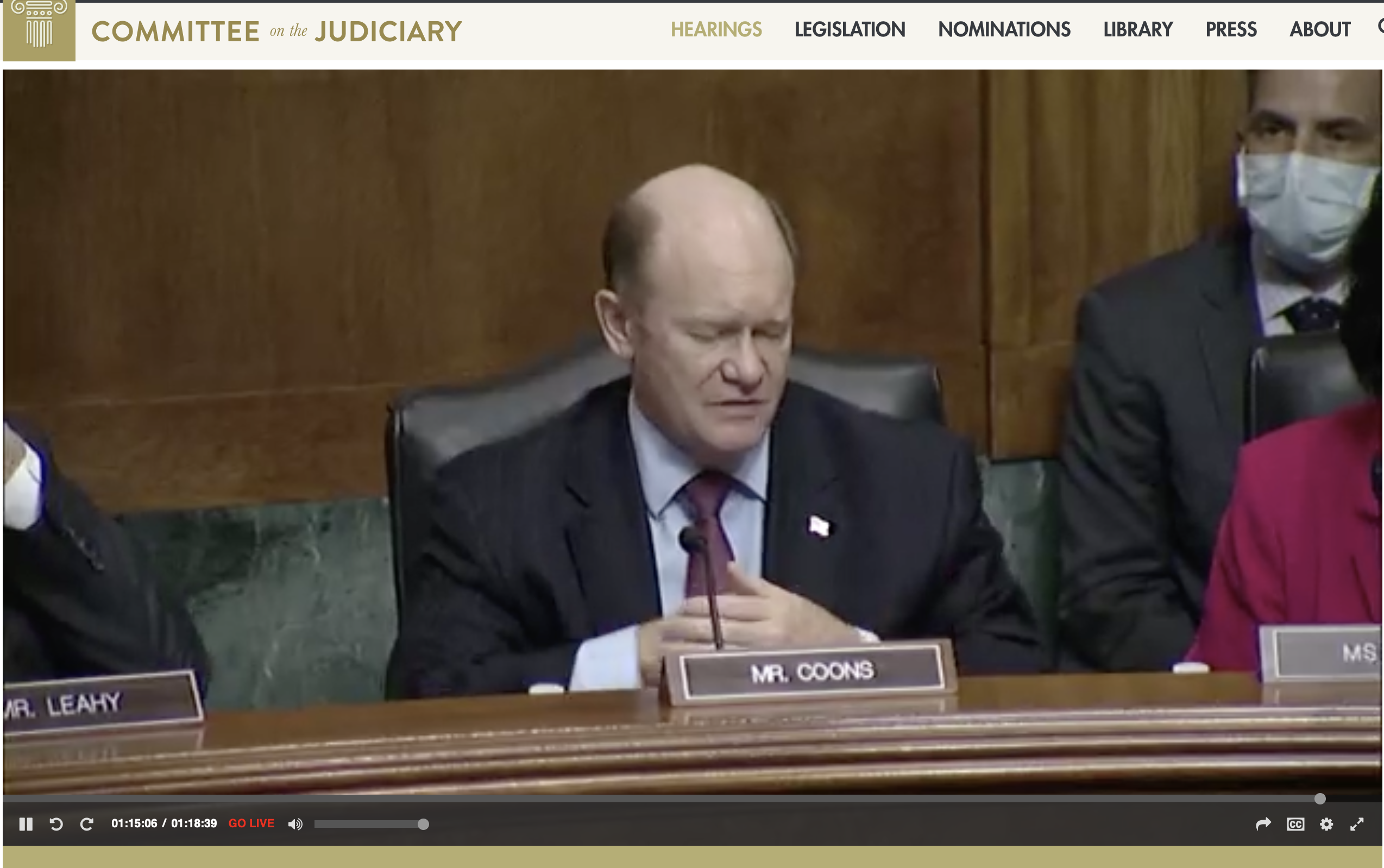 When questioned further on this point by Senator Coons and asked for alternatives to that remedy, Kappos said “what I go to is opportunities to reduce maintenance fees and issuance fees as a positive incentive to record the information.” If the policy goal is to keep the ownership records correct at all points in time, mistakes are always going to be found and “we should provide a mechanism to go back and fix these things in good faith,” he added.

Coons commented at the hearing that, while he agrees with the premise of the bill, he would not want to “inadvertently” harm U.S. inventors:

I do want us to also be mindful about not inadvertently harming U.S. inventors or innovators in the process, and making sure we’re not weakening patent rights or creating administrative pitfalls for their proper enforcement…. I think we strengthen our global competitiveness when we find ways to advantage and strengthen the rights and opportunities for innovation here in the United States. 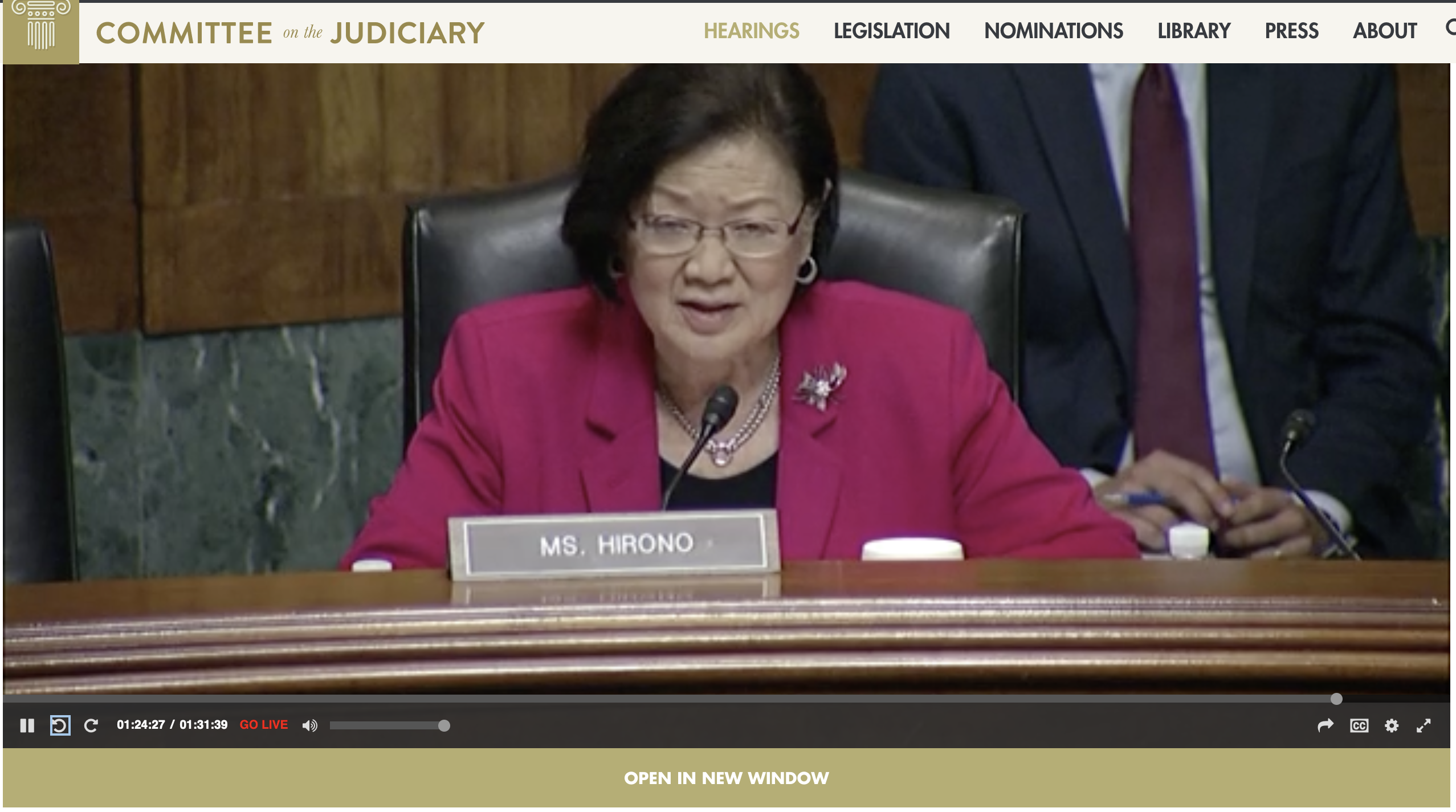 Senator Hirono questioned why such a remedy as stripping a patent owner of the possibility of enhanced damages was necessary at all, since there are already incentives to record ownership, such as advantages against subsequent recordals of interest from good faith purchasers, as Kappos noted. But he also noted that the current recordal system is “clearly not strong enough.”

Professor Robin Feldman of the University of California Hastings Law, responded to the request for alternative mechanisms to incentivize recordation with the note that “laws aren’t helpful unless they can be enforced.” While both positive and negative enforcement mechanisms can be helpful in the legal context, “we do need a way to hold people’s feet to the fire,” she said. “This bill has chosen an area that’s connected to willfulness and touches on a limited area of the patent litigation flow, but I do believe some areas must be there in order to hold people accountable [for] their behaviors.” 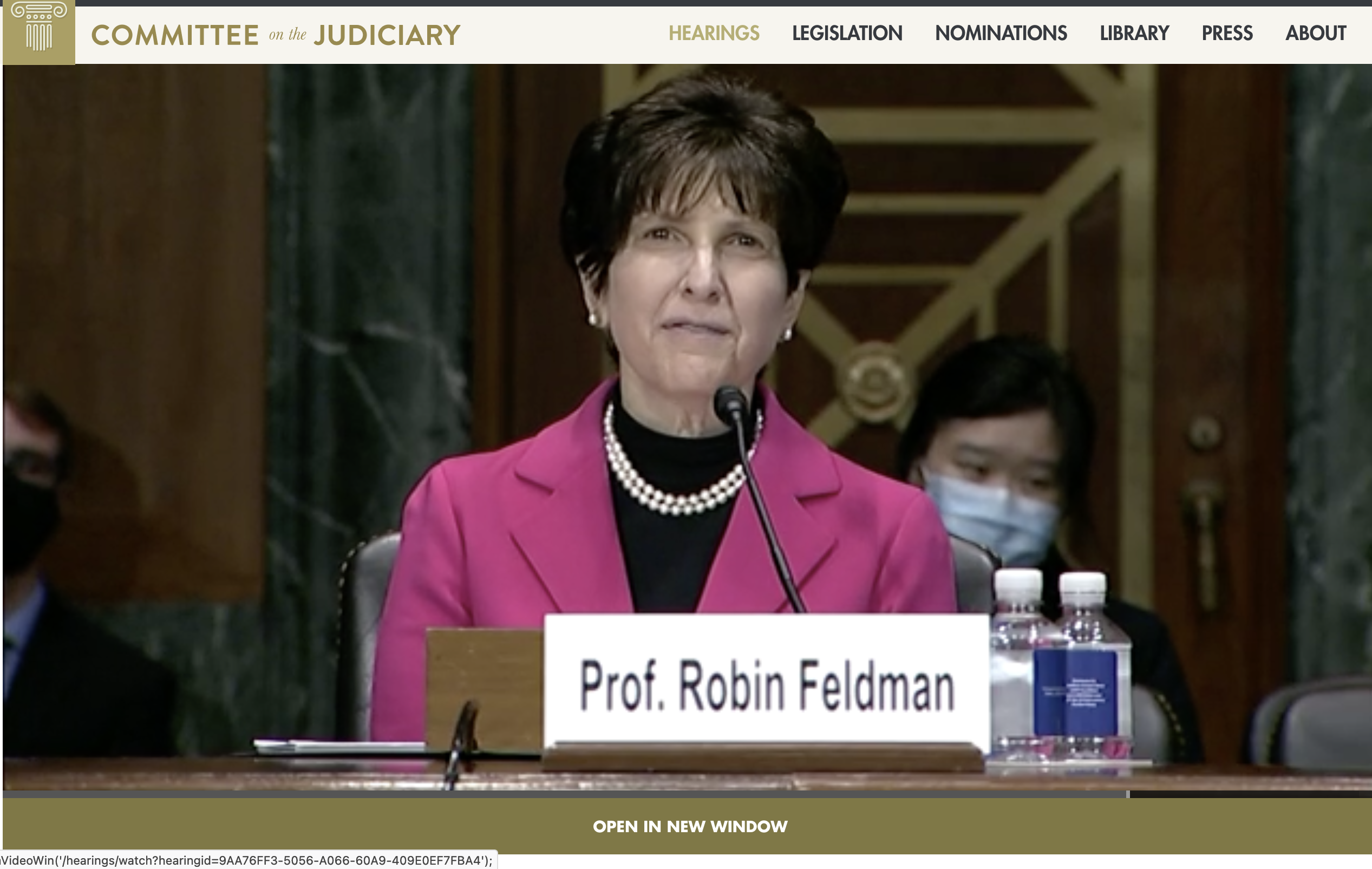 According to witness Abigail Rives of Engine, 158 district court decisions of the several thousand filed between 2013 and 2018 reached a final decision on willful infringement and of those, 62 found willfulness and 32 awarded enhanced damages. While that’s a very small percentage of patent litigation to which the remedy would apply, it arguably could strip damages in the most egregious cases.

The other witness was Allen Stabinsky, Senior Vice President; Chief Deputy General Counsel at Intel, who focused his comments on the bill’s relevance to combating the rise of investor-funded litigation, particularly with respect to integrated circuit/ semiconductor technology.

In a statement sent to IPWatchdog, Innovation Alliance Executive Director Brian Pomper said the bill as drafted “would have unintended consequences, for small inventors and others, and would ultimately work to undermine innovation.” Pomper explained:

As written, the bill would prohibit any patent owner who fails to record any change in certain rights or interests to a patent with the U.S. Patent and Trademark Office within a 90-day period from collecting enhanced damages from a willful infringer.  We have a few concerns with this approach that we hope can be addressed as the bill moves through the legislative process.

First, there is no apparent connection between the infraction of failing to record a change in rights or interests to a patent and the penalty of foregoing willful damages.  That is especially concerning given that prohibiting willful damages would give a windfall benefit to a truly bad actor, one guilty of purposely and willfully infringing a patent in bad faith, due to an unintentional honest mistake or oversight on the part of a rights holder.  As one commentator noted, that would be like the police refusing to respond to a report of burglary or trespassing because a homeowner had failed inadvertently to record their deed properly.

Second, for resource-constrained small inventors, entrepreneurs with multiple funders and investors, or even large companies engaged in a complex transaction, we fear the 90-day period is too short.  That is compounded by an additional concern – the lack of any ability to cure honest mistakes in failing to meet this timeline.  A mechanism to allow recordation after the 90-day period without penalty in cases of an honest mistake or oversight would be a welcome addition to this bill.

Kappos agreed during the hearing that the 90-day timeframe would present problems and should be longer than what it proposes in the bill, since, in the real world of transactions many times changes come about as the result of larger transactions with many moving parts.