Deep Learning: Tracking the Growth of an Emerging Technology

“‘Deep learning’ is an emerging technology that not only shows traction, but explosive patent growth as well.”

While our organic brains are filled with approximately 86 billion neurons, the “deep learning” quest was built on mathematics and Graphics Processing Units (GPUs). It seemed like a breakthrough. With enough examples of a category, could a deep learning model assess data that the model hadn’t seen previously, and then score, rank and report the “matches” to a user? In short order, I was persuaded that the answer was yes.

On June 25, 2016, I read the opinion in Bascom Global v. AT&T Mobility and learned that an “inventive concept” would satisfy “step two” in Alice v. CLS Bank. Which meant, theoretically, that even software systems using the technology would pass muster for a patent. But how can anyone tell whether an emerging technology like deep learning is gaining traction?

An early indicator would be what experts in the field say publicly. On September 28, Fortune published “Why Deep Learning Is Suddenly Changing Your Life – And will soon transform corporate America,” by Roger Parloff. In that article, Andrew Ng, a former computer science professor at Stanford, compared the changes brought about by electricity during the Industrial Revolution to the type of change deep learning would herald.

Out of curiosity, I started keeping track of patents issued by the USPTO where the terms “deep learning,” “deep neural” or “multi-layer neural” were used in the claims. The USPTO publishes new patents every Tuesday. So, every Tuesday, I still run the same search, using the Advanced search framework, where ALCM is the acronym for Claims and ISD is the acronym for Issue Date. My search terms are always the same (capitalization is not necessary but helps for visualization):

The results are presented in only a minute or so. The annual total is identified, and all of the issued patents are listed, but (fortunately) the USPTO output starts with the most recent 50 patents.

By 2018, deep learning was being understood as a way for computers to make predictions. In every realm of uncertainty, deep learning for both images and language was leading to innovations. Three economists at the University of Toronto, in a book entitled Prediction Machines, put their finger on why: deep learning was reducing the cost of prediction under uncertainty. To summarize from a review: “Prediction tools increase productivity–operating machines, handling documents, communicating with customers. Uncertainty constrains strategy. Better prediction creates opportunities for new business structures and strategies to compete.”

For example, supply chains “think” in real time; self-driving vehicles and robots respond to risks in a changing environment; and social media companies use examples of “hate speech” to take it down – if it’s identical or nearly identical to the examples flagged by “content moderators” – in milliseconds and before anyone reads the text that’s against a company policy.

Then, sure enough, the total for 2019 was 396, and the total for 2020 was 726. Then, I realized I could go back in time to find out what was leading up to the results I had surfaced. I ran the same search again, starting with ISD/2001. There was only one patent where one of the three terms were in the claims. In 2002, there were four.

But then look at how “deep learning” began to show that a “land rush” for patents was going on. As of the end of Q3 on September 28, 2021, the bar chart looks like this, with the total in 2021 (so far) at 824 new “deep learning” patents. Clearly, the conclusion is that “deep learning” is an emerging technology that not only shows traction, but explosive patent growth as well. And I can report that U.S. patents are going to U.S. inventors as well as assignees from many other countries. Given the rate at which I see new patents every week, I project a Year End total of 1,099. 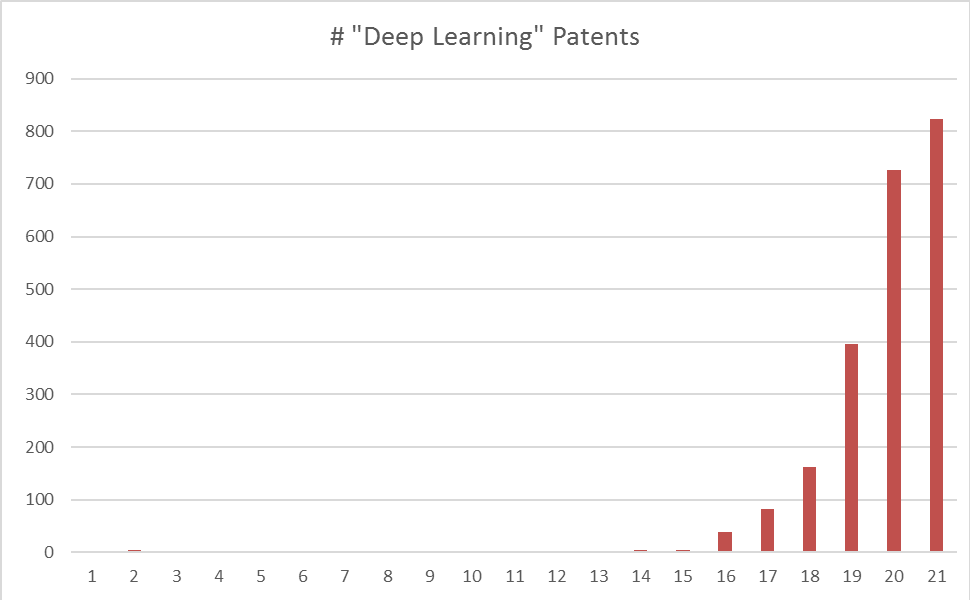