“One pretty consistent sign of monopoly power is the ability to set prices and control output—what could be a better example of that than Facebook’s ability to demand data from its users without telling them its value, or even acknowledging that it has a value at all, while providing a service whose quality, features, and terms of service, are subject to change at any moment?” – Senator Mike Lee 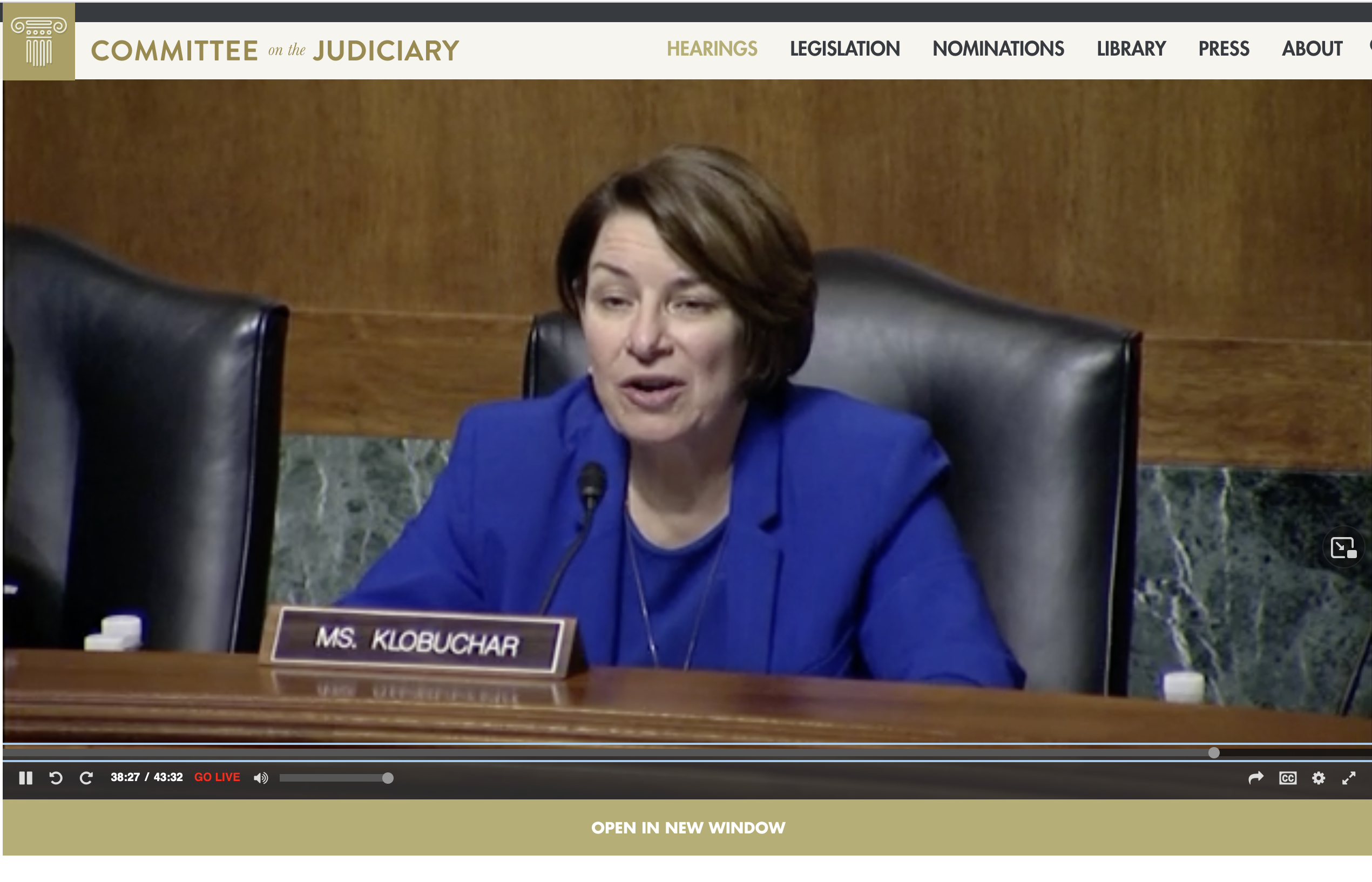 The Senate Judiciary Committee’s Subcommittee on Competition Policy, Antitrust, and Consumer Rights held a hearing yesterday titled “Big Data, Big Questions: Implications for Competition and Consumers,” in which both Republican and Democratic senators pushed representatives of Facebook and Google to answer difficult questions about their platforms’ impact on everything from competitive marketplaces to teenagers’ body image. The hearing is one in a series that aims to conduct a bipartisan review of America’s competition issues, according to Subcommittee Chair, Amy Klobuchar (D-MN).

Reining in ‘the Gatekeepers’

Klobuchar explained that tech companies like Google, Facebook and Amazon collect an enormous amount of data on our daily activities and that their very business models depend on that system. “The control big data has [poses] serious implications for healthy competitive marketplaces,” Klobuchar said. “Data can be a barrier to entry. Unless you have a lot of it, you may not be able to reach consumers successfully.”

She called big tech companies “powerful internet gatekeepers” that keep small businesses in check by controlling how they can reach customers. She also expressed concern about merger practices and acquisitions by dominant digital platforms of smaller companies with troves of consumer data. “The antitrust agencies must place greater emphasis on determining the competitive impact of obtaining even more data through mergers,” Klobuchar said. “Our laws have to be as sophisticated as the markets that we today operate in.”

Klobuchar introduced a bill earlier this year titled the Competition and Antitrust Law Enforcement Reform Act of 2021 that would update the legal standard to prohibit such mergers and anticompetitive conduct. The bill would also give antitrust enforcers more resources to pursue such actions. The bill explains: “Federal antitrust enforcement budgets have failed to keep pace with the growth of the economy and increasing demands on agency resources, significantly undermining the ability of the Federal antitrust agencies to fulfill their law enforcement missions and contributing to the rise of market power in the American economy.” Klobuchar said the bill would bring in more than $100 million for both the Department of Justice and Federal Trade Commission. 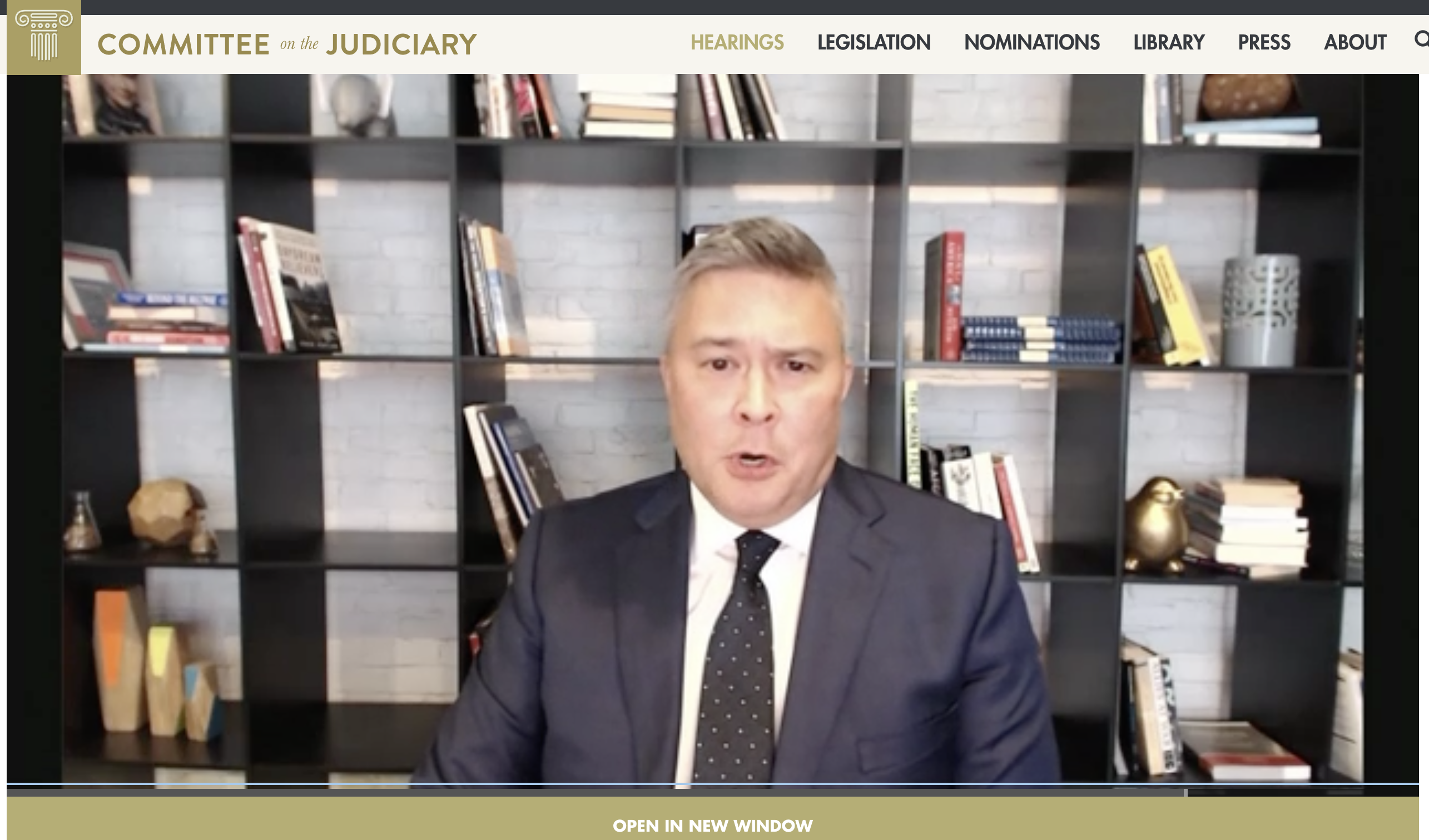 The questioning got off to a rocky start when Klobuchar asked Facebook Vice President, Privacy & Public Policy, Steve Satterfield, and Google Vice President of Government Affairs and Public Policy, Markham Erickson, how important data is to each of their companies. Satterfield dodged the question, explaining that Facebook believes “success comes from building great products, not from how much data you have,” causing Klobuchar to become frustrated off the bat. Erickson answered by acknowledging that data is important, but denied that it is a requirement of users: “At Google we provide a means for people to find relevant information on the internet and to do that we have to understand what they’re looking for. But anyone can use our products for free without providing or storing any personally identifying information with us. We provide transparent mechanisms to show how data is being used and to see the data stored in their account.”

In her introduction, Klobuchar noted that when Apple recently rolled out an update that allowed iPhone and iPad users to decide whether they want to be tracked online or not, 75% of consumers opted out. When she asked Erickson if that signaled cause for concern about the competitive impact of Big Tech’s exclusive access to that kind of data, he downplayed the significance, explaining that “most users are providing similar information to multiple online services. So, the data is really non-rivalrous from a competition standpoint. It’s easily obtained by others.” Satterfield added that “There’s a lot of data out there being used for innovative purposes, including to show people ads.”

Subcommittee Ranking Member Mike Lee (R-UT) pressed Satterfield to respond to the Washington Post’s recent deep dive into Facebook data revealing that $164 per user is the approximate cost per year of its data, explaining that Facebook has all the signs of a monopoly power:

We pay for the service with our data. There’s so little transparency in the transaction, and what I get in return is always subject to change,” Lee said.  “It’s basic antitrust law that you look for symptoms and signs. One pretty consistent sign of monopoly power is the ability to set prices and control output—what could be a better example of that than Facebook’s ability to demand data from its users without telling them its value, or even acknowledging that it has a value at all, while providing a service whose quality, features, and terms of service, are subject to change at any moment? 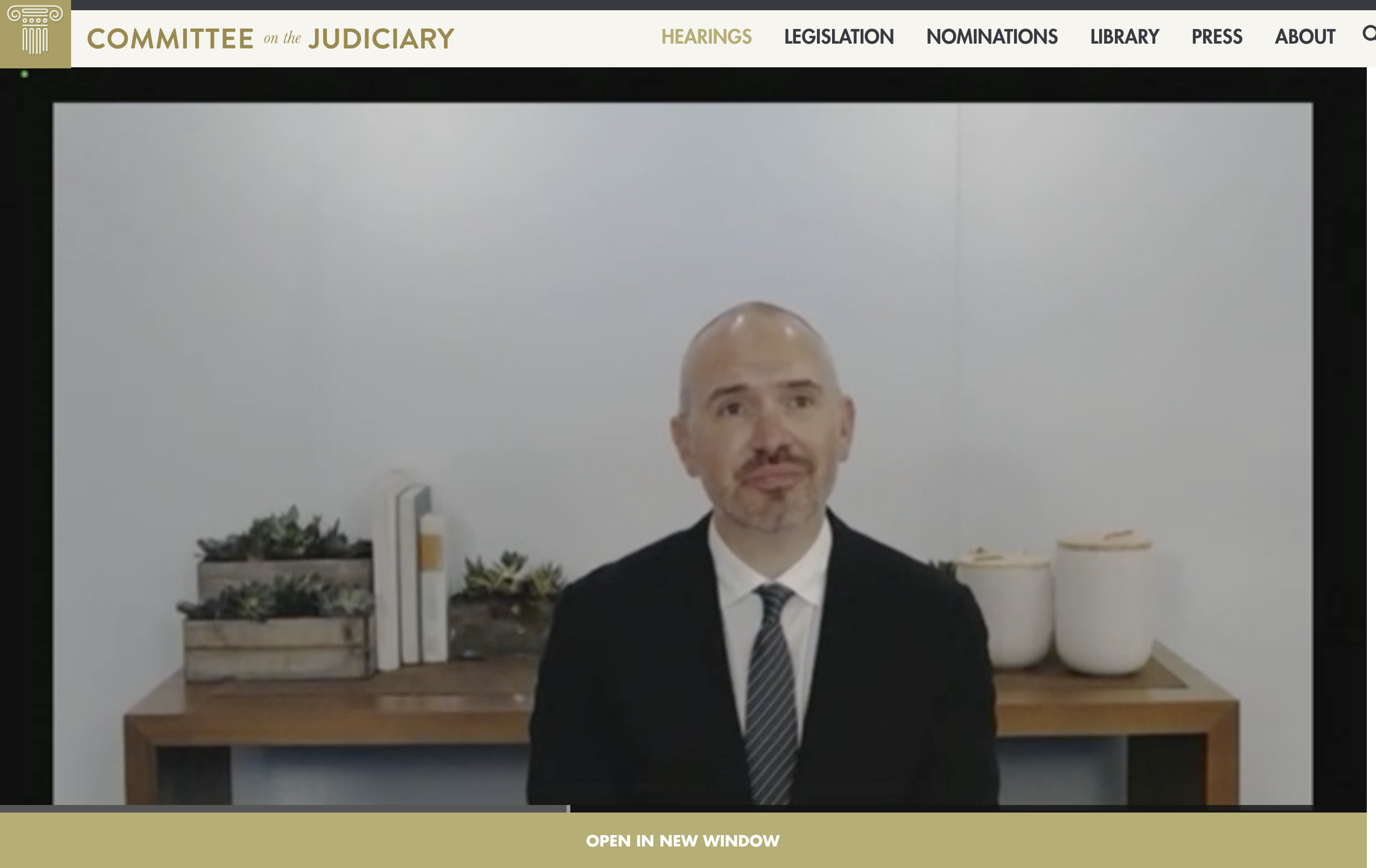 Satterfield responded that “I think we see things differently.” He said that Facebook does not see data “as something people give us in exchange for providing our services; we see it as something we use to provide the service to them, to provide value to them.” Lee became annoyed by this response and asked Satterfield to accept the premise “that I think all of us in this room would acknowledge exists, which is that your service is paid for in the sense that people contribute their time and you’re able to monetize that.” But Satterfield again replied “that’s just not how we think about data.”

Lee and Senator Chuck Grassley (R-IA) introduced their own antitrust-focused bill, the Tougher Enforcement Against Monopolies (TEAM) Act, in June of this year, which addresses many of the same problems Klobuchar’s bill does but takes a more “holistic approach” and is careful not to “massively [increase] regulation and [impose] a command-and-control grip over the economy.”

During IPWatchdog’s LIVE conference in Texas last week, former Assistant Attorney General in charge of the Antitrust Division at the U.S. Department of Justice (DOJ), Makan Delrahim, said both Lee’s and Klobuchar’s bills have promising proposals that could “make it,” and that there is a “wide avenue” for positive change in the realm of antitrust law.

Besides Satterfield and Erickson, the other hearing witnesses included Sheila Colclasure, Global Chief Digital Responsibility and Public Policy Officer, IPG Kinesso (a data broker); John Robb, Author, The Global Guerrillas Report; and Charlotte Slaiman, Competition Policy Director, Public Knowledge. Robb explained that, while China and Europe have taken starkly different but clearer approaches to dealing with data, the United States is “still up in the air.” The way we deal with data here is “very feudal,” Robb said, with corporations acting as the lords and owners of the data, which they farm from people who traverse their platforms. “It’s clearly not sustainable over the long term. It will create wealth inequalities and social instability,” he said.

The solution, according to Robb, is to give people ownership over their data in the same way feudalism was eradicated.  “Putting the individual in the driver’s seat changes the whole equation…. We need a set of digital rights.” 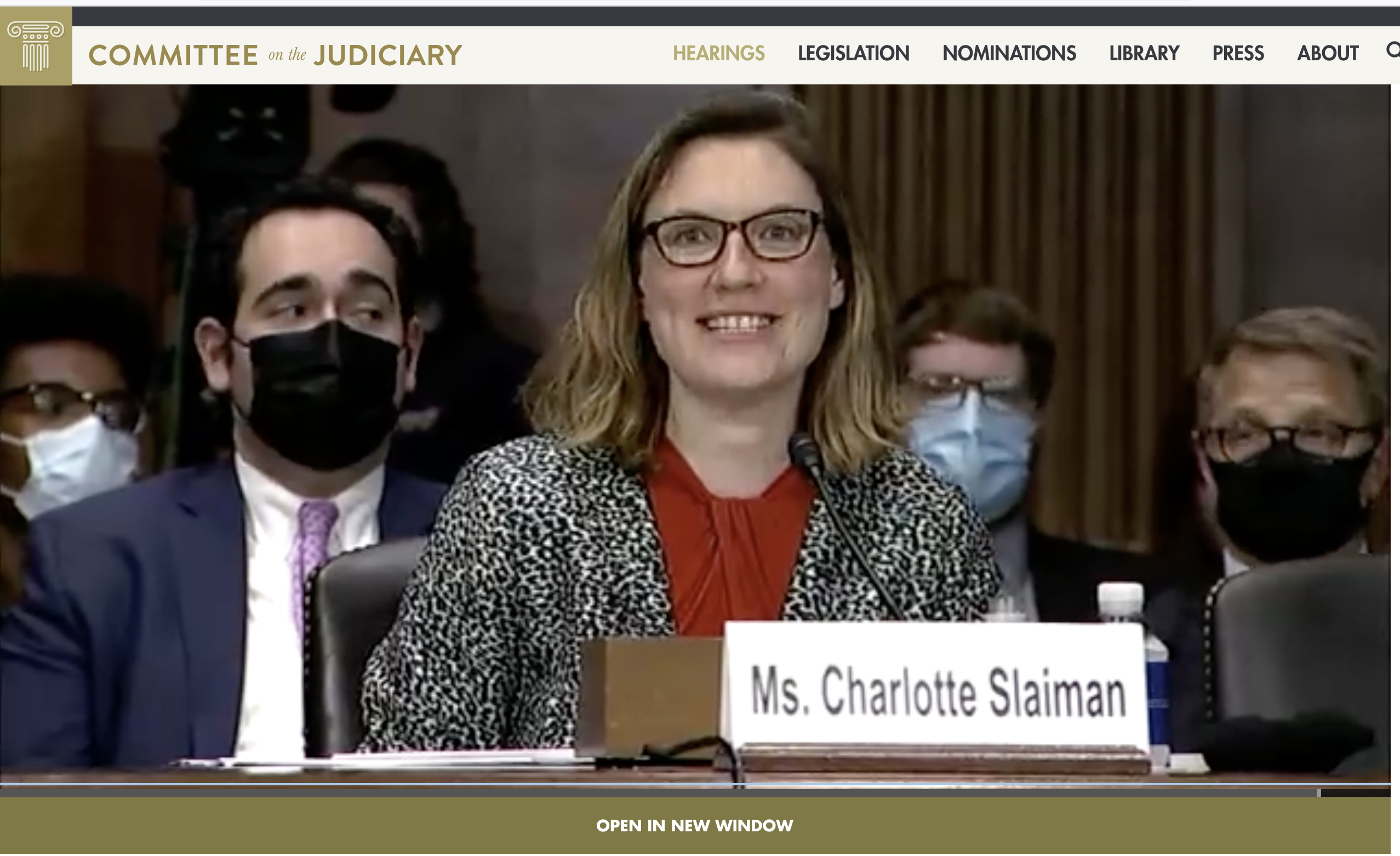 Slaiman’s solutions were focused on increasing regulation. “Until we have a real choice to leave these platforms if we’re not happy with them, they won’t have the incentive to win us over,” Slaiman said. “And we’ll continue to miss out on disruptive innovations that challenge the status quo.”

Slaiman said legislation should focus on three main areas: interoperability, data portability and delegatability. Those “are the ways to neutralize the power that big tech confers on dominant platforms.” Interoperability would allow competition to flourish by letting users communicate across platforms. There is a model for this in the Augmenting Compatibility and Competition by Enabling Service Switching (ACCESS) Act, which was introduced in June. Slaiman also mentioned legislation that would curb platforms’ ability to put their own products first on the page and point users away from competitiors, such as the American Choice and Innovation Online Act, introduced by Representative David Cicilline (D-RI) in June. Other pending bills to address platform monopoly power include the Platform Competition and Opportunity Act and the Ending Platform Monopolies Act. 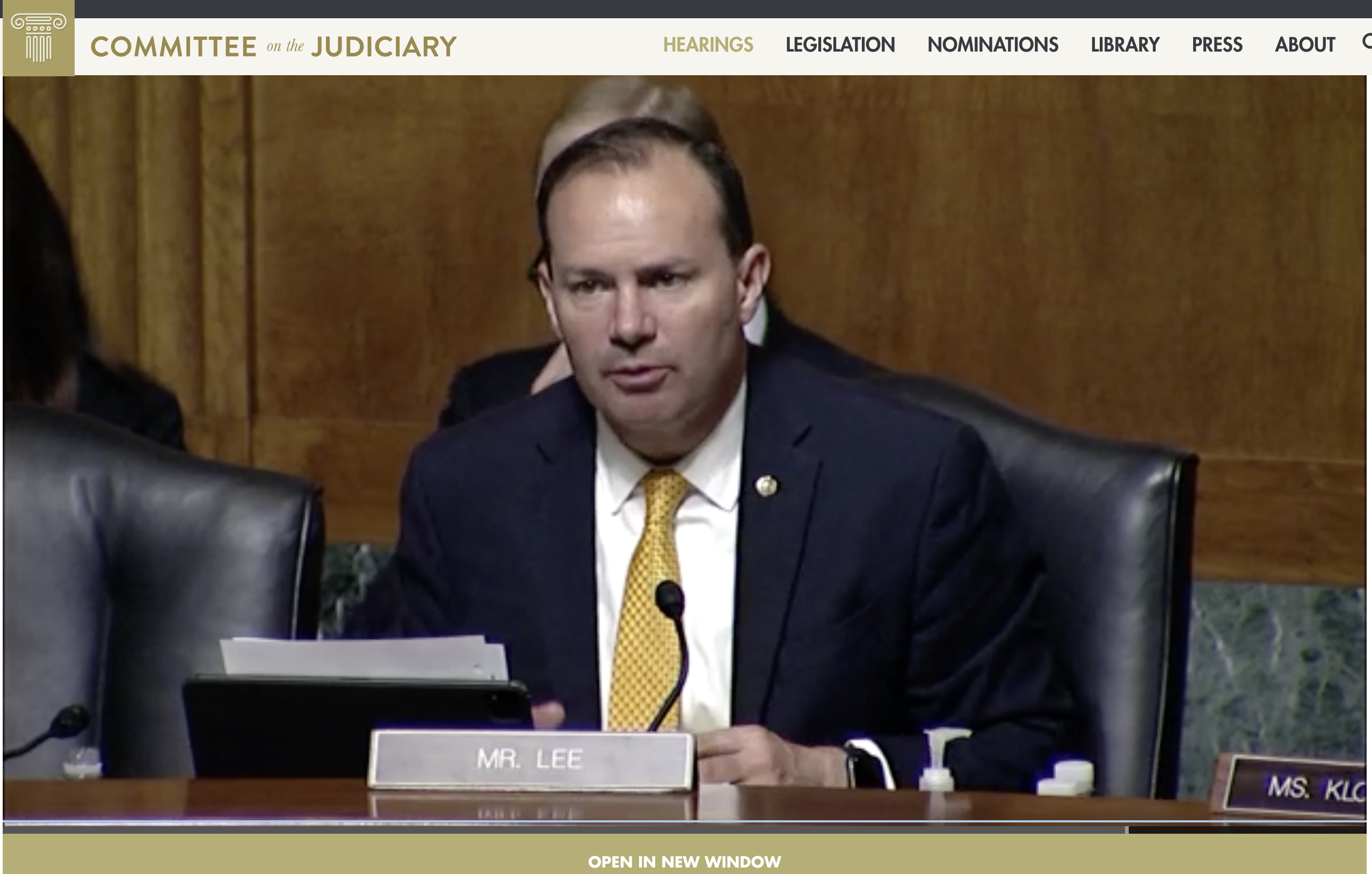 Lee countered this approach, suggesting that the existing laws “are more than up to the task,” and blamed past administrations for not bringing enough antitrust actions. He said the Obama Administration “let Google off the hook” following a two-year monopolization investigation and ignoring “rather conclusive staff recommendations to sue,” and also failed to stop Facebook from buying Instagram and WhatsApp. The FTC under the Trump Administration blocked 27 mergers, while so far, in 2021, the FTC has filed just seven merger cases, “five of which were filed by the outgoing Trump admin,” Lee said.

For her part, Colclasure of Kinesso warned that, while “responsible companies are ready for a comprehensive federal data privacy law that is good for citizens and good for America…limiting who can collect, control and use data would give control to a few companies and unavoidably weaken competition.” She said that new federal privacy laws “should preserve data sharing for beneficial and innovative purposes while making companies responsible and accountable for harmful uses.”

The questioning repeatedly departed from the intended topic of the hearing when several senators pushed Satterfield about the Wall Street Journal’s recent investigation into Facebook’s knowledge of the effects its platform has on teen girls’ body image. Several senators made comparisons to Big Tobacco’s cover up of the link between cigarettes and cancer, accusing Facebook of keeping quiet about the research it had conducted that revealed a direct connection between Instagram use and teen mental-health issues.