“If we remain oblivious to the ineffectiveness of our IP laws for protecting indigenous creations, such cases of cultural appropriation and IP theft will continue.” 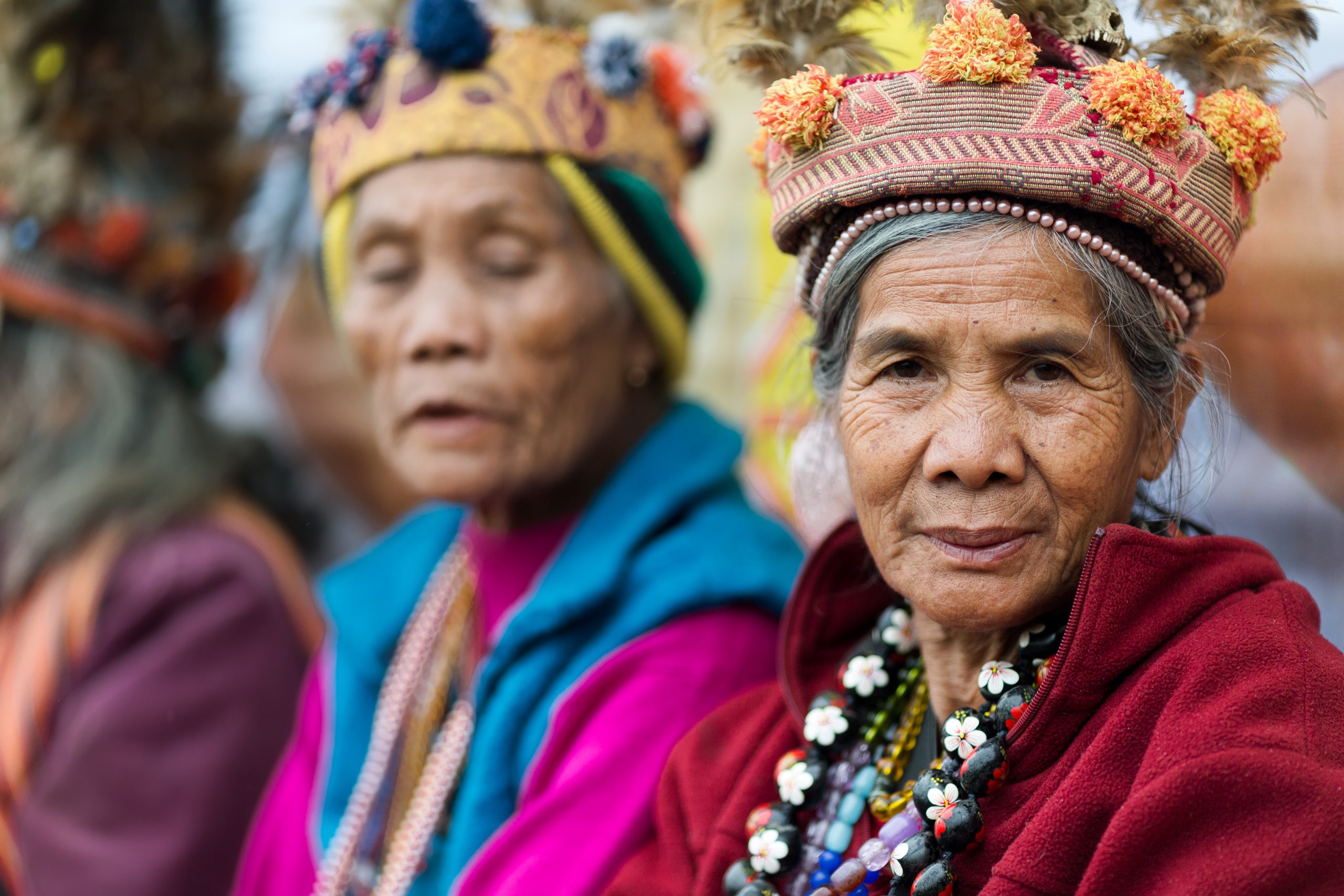 There are many threats to the rich cultures of our indigenous populations. These threats have remained widely unresolved despite the fact that indigenous peoples make up around 370-500 million of the world population. Included in these overlooked issues is the lack of protection given to the intellectual property (IP) of indigenous peoples. It is high time that we push for more accessible, effective, and durable protective measures for indigenous creations.

Indigenous Peoples in the Philippines

The Philippines is a country that is home to an estimated 14 to 17 million indigenous peoples. Recently, some of these communities experienced high-profile incidents of IP theft. Last year, an international brand was embroiled in a controversy when it tried to secure a license for one of the designs of the world-renowned tattoo artist, Apo Whang-Od. The company claimed that Apo Whang-Od handed over exclusive rights to the famous python design through a Memorandum of Agreement, but the 104-year-old artist clarified she was not fully aware of the provisions of the contract. She also said she did not have the capacity to bargain away the design as it was collectively owned by the community. In the same year, a local company known for selling sandals drew criticism for naming its products after various indigenous peoples’ groups in the Philippines. Some leaders from the indigenous communities denounced the company for commodifying culture, stating that the company used the indigenous terms only to gain money and popularity.

More recently, another case that has garnered attention relates to the entry of fake indigenous weaves into the Philippines from China. The counterfeit garments featured the designs of the country’s famous Cordillera weaves. A report revealed that the machine-made replicas have spread throughout local markets, urging local weavers to demand protection from the government. Together, these incidents have shed light on the Philippine government’s longstanding inability to provide genuine protection for Traditional Knowledge (TK) and Traditional Cultural Expressions (TCE).

On the surface, it seems that the Philippines has a strong legal framework for the protection of indigenous works. The Constitution, which operates as the highest law of the land, directs the State to protect the traditions of indigenous peoples. In 1997, the Philippines also enacted the Indigenous Peoples’ Rights Act (IPRA) which introduced the concept of community intellectual rights and granted indigenous peoples the right to practice and revitalize their cultural traditions and customs. In reality, however, both the Constitution and the IPRA failed to address violations of indigenous works and traditions. In the first place, they are unable to clearly define the rights of the indigenous peoples. More importantly, they fail to enumerate concrete protective measures.

Unfortunately, the country’s Intellectual Property Code (IP Code) leaves much to be desired as well. The IP Code appears largely disconnected from the needs of the indigenous peoples. To start with, many indigenous communities find the application processes for protecting IP under the IP Code too expensive and cumbersome. Some indigenous peoples do not know the legal remedies available to them, nor the agencies that could assist them, in cases of infringement. There is also a lack of awareness on administrative procedures such as systems of registration, especially among indigenous groups in remote communities.

Furthermore, the IP Code mainly regulates the commercial rights of scientists, businessmen, and artists, when in fact, the works of indigenous peoples involve not only monetary or commercial considerations but also cultural, moral, and spiritual dimensions. Using the works of indigenous peoples without understanding their cultural significance may result in acts of disrespect. An example can be found in the misuse of the Ifugao death blankets – blankets which are used to cover the corpse of members of the Ifugao tribe when they pass away. Sadly, there have been instances in the past when Ifugao death blankets were used as sofa covers and table cloths. These practices desecrate the sacred blankets and are clearly offensive to the Ifugao culture.

Another problem with the IP Code is that it can only provide time-bound protective measures. This is inconsistent with the ancient and timeless characteristic of traditional knowledge. Take, for example, the case of indigenous weaves. Some indigenous designs from the Philippines have been around since the 13th century. The processes of making these designs have been carefully passed down from one generation to another, enabling some indigenous communities to preserve their culture and technology for over thousands of years. Unfortunately, the IP Code prescribes time-limits to IP rights. For example, an industrial design which can be used to protect the design of weaves can only last for a maximum period of 15 years. Even a copyright, which gives relatively long-lasting protection, could remain valid for only a maximum of 50 years after the death of the creator.

Lastly, it is often the case that individual members of an indigenous group cannot claim ownership over traditional practices, as these belong to the entire group. Most of the time, the knowledge and technology that form a traditional practice are so inextricably linked to the indigenous group, that they are already considered part of their identity. On the contrary, IP applications are innately individualistic in nature. Most registration processes require claims by persons acting as individuals, rendering the process of assigning ownership to an indigenous group next to impossible.

Protection under the IP Code

One mode of protecting the works of indigenous peoples under the current IP system is through the registration of geographic indications under collective marks. For example, a T’boli tribe in Lake Sebu in Mindanao was able to register a collective mark that they now use in authenticating their t’nalak weaves. Indigenous groups may also invoke copyright protection for works of applied art wherein protection would attach from the moment of the works’ creation. An indigenous product may be protected under this category when its ornamentations or patterns have artistic components that remain separate from functional elements. The same product may also be protected under a patent or utility model, if the same is produced through a patentable process.

Notably, while the aforementioned modes of protection are available, they are still accompanied by the same issues of individualistic ownership and time-bound protection. Nevertheless, they are worth exploring until more concrete legislation is passed which caters to the unique characteristics of indigenous IP.

Different countries already recognize the need to address the urgent needs of indigenous peoples concerning their Traditional Knowledge. For instance, countries in Latin America already passed local laws that protect the collective IP rights of their indigenous peoples. Specifically, Panama, Peru, Costa Rica, Brazil and Venezuela have enacted laws that recognize indigenous peoples’ rights over their traditional knowledge. Said laws prohibit the appropriation and use of traditional knowledge without the consent of the indigenous peoples. To illustrate, a Panamanian law led to Nike cancelling its launch of a new pair of shoes that bear a design similar to the traditional “Mola” pattern of the Guna people. The African Union also passed a Model Law for the protection of the rights of its local communities and for the regulation of access to their biological resources. The Model Law required the execution of prior informed and written consent before access may be given to any of the biological resources, knowledge or technologies of the local communities. Meanwhile, China passed its Patent Law of 2000 which allowed the protection of varieties of Chinese traditional medicines, while India enacted its Biological Diversity Act which prohibited the claim of any IP rights over any invention that is based on research made on the biological resources from India. Portugal also passed legislation that regulated the registration, conservation, legal custody, and transfer of plant endogenous material, whereas Thailand enacted a law protecting and promoting traditional Thai medicines. Similarly, the United States has its Indian Arts and Craft Act of 1990.

While such efforts by countries to address the concerns of indigenous peoples in protecting their traditional knowledge are laudable, legal gaps remain, especially when it comes to integrating indigenous rights into the existing IP system. To reiterate, although the Philippines enacted the IPRA to protect the rights of the indigenous peoples, including their community intellectual rights, the law ended up issuing toothless policies and feel-good statements that did not give concrete means of protection for the IP rights of the indigenous communities.

To better protect the rights of indigenous peoples over their works and creations, government agencies should be more proactive. To illustrate, the Intellectual Property Office of the Philippines now requires the disclosure of indigenous elements in application forms for the registration of IP rights. Indian laws also require the disclosure of the source or geographic origin of biological materials and traditional knowledge in patent applications. China is also pursuing a policy that promotes indigenous innovations in a bid to bolster its performance in technology markets.

The lack of harmony between IP rights and indigenous peoples’ rights led members of the World Intellectual Property Organization (WIPO) to establish the Intergovernmental Committee on Intellectual Property and Genetic Resources, Traditional Knowledge and Folklore, whose aim is to develop an international legal instrument that will govern indigenous IP rights. However, the adoption of such an instrument is still a work in progress. Based on the draft documents of the IGC, some of the proposals include the following:

This is, of course, a welcome development to countries like the Philippines, which serves as home to many indigenous communities. Undeniably, the lack of a sui generis system of protection for traditional knowledge and traditional cultural expressions has made it difficult for the Philippines to protect its indigenous culture. It is unfortunate that currently available remedies such as the practices of mandating disclosure requirements, producing defensive publications, and issuing geographic indications, either remain underutilized or misapplied in the country. An international instrument on the adoption of sui generis protection for traditional knowledge would guide and pressure countries into harmonizing their legal systems so that they could better protect the works and expressions of their indigenous peoples.

Interestingly, as of the time of writing, a new case of cultural appropriation is once again in the news in the Philippines. A YouTube star has drawn flak for trying to sell the tattooing techniques of the Kalinga community through his online academy. In a classic case of history repeating itself, the vlogger appeared to justify his actions by claiming that his company obtained  consent to the online course from Apo Wang-Od and her family – seemingly unmindful of the fact that their actions did not only affect a few individuals but an entire community and its sacred culture.

Unfortunately, if we remain oblivious to the ineffectiveness of our IP laws for protecting indigenous creations, such cases of cultural appropriation and IP theft will continue. We do not need to wait for States and international organizations to act on this issue – this may take years, even decades. Let us take advantage of this period to raise awareness on the plight of our indigenous peoples and demand the indigenization of the global IP system.