“[P]rivate firms are driving a major expansion in space tech developments, as the EPO also noted a three-fold increase in the number of cosmonautics patent applications filed at the agency in the decade between 2007 and 2017.” 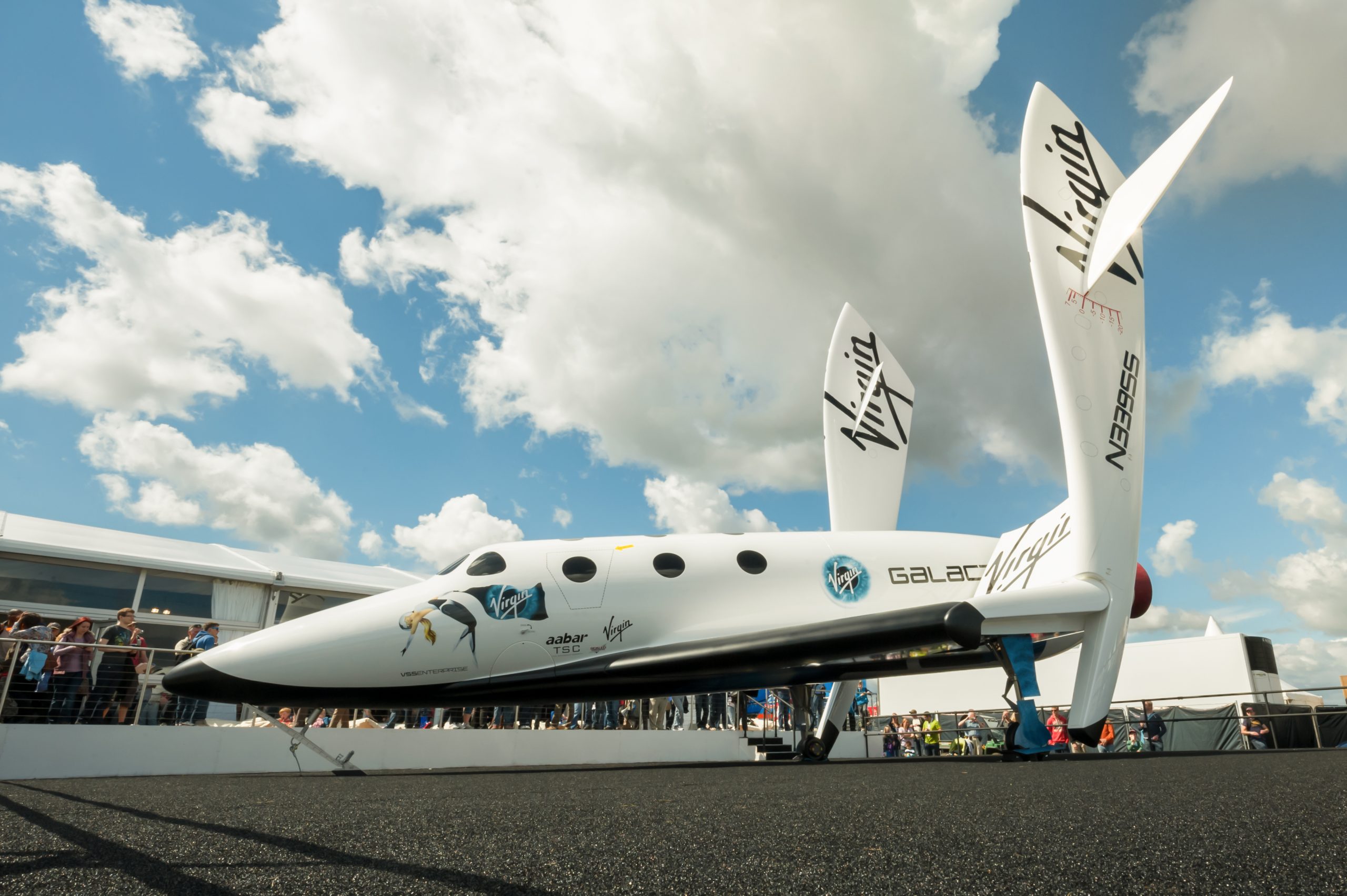 This July has been a landmark month for the commercial space sector thanks in large part to the determination of two tech billionaires: Richard Branson, business magnate and founder of the Virgin Group; and Jeff Bezos, the former CEO of e-commerce titan Amazon.com. Both of these icons of business entrepreneurship reached the outer limits of Earth’s gravity to slip into space for a brief moment in recent weeks—Branson in the VSS Unity, owned by his Virgin Galactic spaceflight company, and Bezos in the New Shepard craft developed by his Blue Origin firm.

The successful spaceflights for both Branson and Bezos are breathing life into the nascent space tourism industry, as many others with the wealth to pay for a seat to outer space are lining up for the opportunity. The same day that New Shepard crossed the Kármán line, Bezos announced that Blue Origin has sold nearly $100 million worth of tickets to the edge of space with plans to take passengers to the Kármán line twice more during 2021. While ticket prices for the New Shepard have not been disclosed, tickets for a ride on Virgin Galactic’s VSS Unity reportedly run anywhere from $200,000 to $500,000—a sum that not every adventurous spirit likely can afford.

Indeed, private space firms seem to be driving research and development for the entire space industry over the past decade or so. On July 21, one day after New Shepard took Bezos and others to space, the European Patent Office (EPO) published the results of a study into global patenting trends in cosmonautics. The EPO found that 85% of European patents related to spaceflight are owned by private companies, with 13 of the top 15 firms filing the most patent applications at the EPO covering space technologies being private R&D firms from the U.S., Japan or Europe. Those private firms are driving a major expansion in space tech developments as the EPO also noted a three-fold increase in the number of cosmonautics patent applications filed at the agency in the decade between 2007 and 2017. Interestingly, despite China’s growing dominance in the global tech world, the EPO found that “the overall increasing trend would be present even if the activity of Chinese applicants were disregarded.” Within the entire space tech sector, the areas seeing the largest amount of patent filing activity in recent years include propulsion, space systems and spacecraft.

While the EPO study focuses on firms like Airbus, Northrop Grumman and others who file a great number of patent applications across a wide spectrum of space technologies, doubtlessly the space race this July between Bezos and Branson has captured much of the world’s collective attention this summer. Seemingly left out of this equation is Elon Musk, another well-known personality from the business world who has taken efforts to achieve spaceflight through his firm SpaceX. However, while Virgin Galactic and Blue Origin may have both touched the boundary of space with live passengers, SpaceX recently signed a $178 million contract with the National Aeronautics and Space Administration (NASA) for a planned October 2024 launch of NASA’s Europa Clipper mission that plans to fly-by Jupiter’s moon Europa 45 times to survey that moon for conditions suitable for sustaining life. The SpaceX Falcon Heavy rocket launching the Europa Clipper mission is a commercial alternative to NASA’s Space Launch System, which the space agency uses for super heavy-lift launches for missions to the outermost parts of our solar system and beyond.

Blue Origin has itself been jockeying for position among the firms vying for NASA contracts, highlighting the importance that the government space exploration sector still has despite the rise of private R&D firms. On July 26, Blue Origin published an open letter by Jeff Bezos and addressed to NASA Administrator Bill Nelson in which the company offered to waive up to $2 billion in payments from the government for services provided by Blue Origin to develop a Human Landing System (HLS). The offer was spurred in large part by NASA’s $2.89 billion contract awarded this April to SpaceX to develop the next crewed lander that will reach Earth’s moon. “Without competition, a short time into the contract, NASA will find itself with limited options as it attempts to negotiate missed deadlines, design changes, and cost overruns,” Bezos’ letter noted.

The billionaire space race is ramping up at the same time that Bezos is making a major career change, having recently stepped away from serving Amazon as CEO. Although he will still serve the e-commerce company he founded in 1994 as executive chairman and remains the company’s largest shareholder, Bezos’ decision to hand Amazon’s reins over to incoming CEO Andy Jassy, who previously helped to direct Amazon’s cloud computing division, likely signals that Blue Origin will become a much bigger focus of Bezos’ famed relentlessness in his business pursuits. 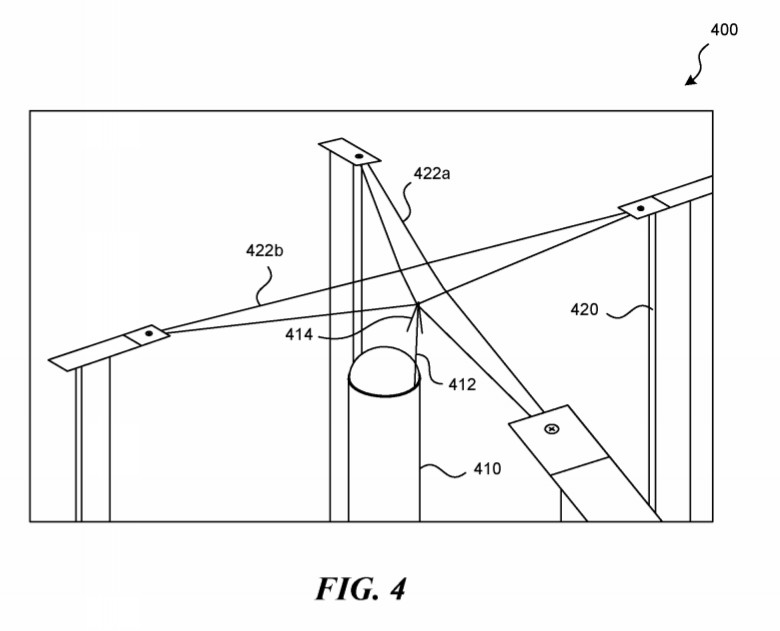 Blue Origin’s New Shepard spacecraft is a vertical-takeoff, vertical-landing (VTVF) suborbital launch vehicle. The VTVF launch style of the craft has enabled Blue Origin to develop New Shepard for use with a reusable rocket; Bezos’ space firm first achieved a successful relanding of the VTVF launch system’s rocket in November 2015. The following month, Elon Musk’s SpaceX achieved the same feat with a vertical landing of its Falcon 9 rocket.

The ‘122 patent, issued to Blue Origin last November, covers a space vehicle system comprising a landing pad, a plurality of cables defining an opening above the landing pad, a plurality of temporary restraints mounted to the cable support structure and releasably secured to corresponding cables, and a space vehicle having an engagement device to engage the cables such that the space vehicle is temporarily supported above the landing pad. The resulting vertical landing system was designed to reduce the costs of space travel by improving upon reusable space launch systems employed by NASA, which still required expensive reconditioning before rocket reuse.

U.S. Patent No. 8424808, Compensating for Wind Prior to Engaging Airborne Propulsion Devices 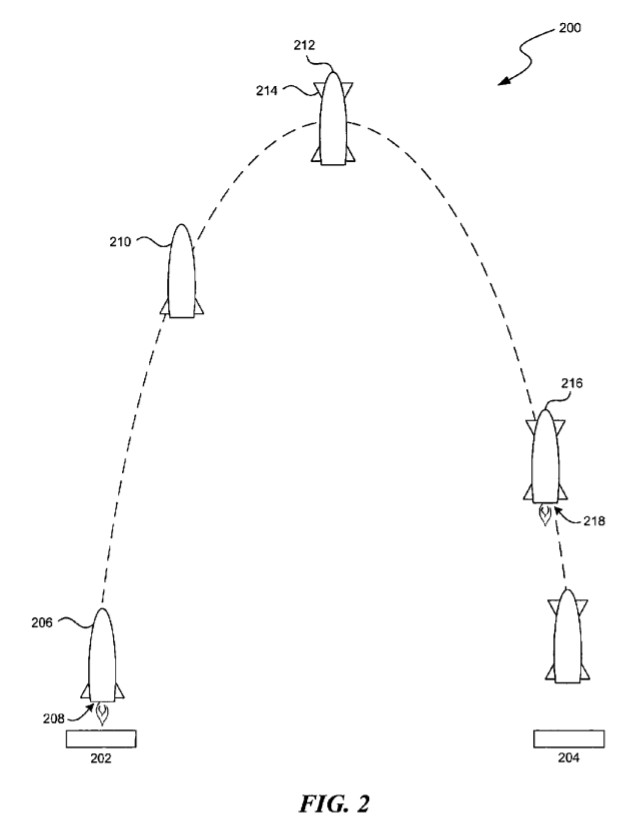 Another technology developed by Blue Origin to reduce the costs of spaceflight is reflected in the ‘808 patent, issued in April 2013, which covers a method performed by a reusable launch vehicle for compensating for wind prior to engaging propulsion during approach to landing in a powered slowdown configuration. The method includes beginning an unpowered descent, determining a rotation angle corresponding to a reusable launch vehicle’s attitude, which is a measurement of the vehicle’s orientation relative to Earth’s horizon, and then commanding a second rotation angle corresponding to a second attitude that causes the vehicle to maintain a vertical descent path. The method results in preventing any substantial deviation in a vertical descent path at the moment that a propulsion device is engaged to reduce vertical descent speed. 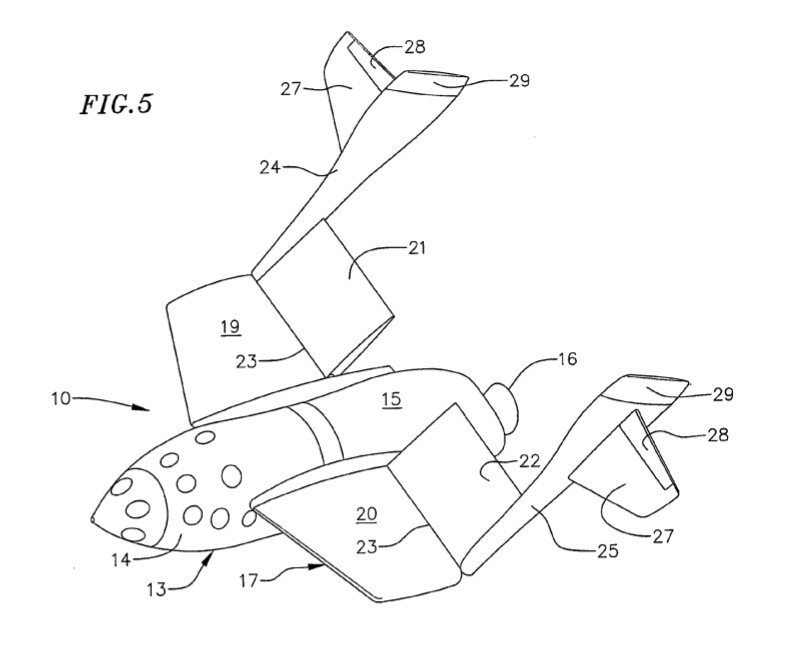 A search of patents assigned to Virgin Galactic actually yields zero results when browsing the USPTO’s Patent Full-Text Database but the ‘207 patent is assigned to Mojave Aerospace Ventures, an aerospace company that in 2004 won a $10 million competition for manned spaceflight technologies that Virgin Galactic’s Richard Branson wound up licensing from the firm. Filings with the U.S. Securities and Exchange Commission indicate that Virgin Galactic continues to hold a spacecraft technology license agreement for commercializing Mojave’s spaceflight technologies, and diagrams from the ‘207 patent bear a striking resemblance to the VSS Unity recently taken to the limits of Earth’s gravity with Branson in tow.

The ‘207 patent covers a spacecraft with a fuselage, wings extending from the fuselage and having aft sections with outer ends supporting rearwardly extending tail booms, and an elevating system for moving the aft wing sections from a normal airfoil shape to an elevated position producing high drag for slowing the spacecraft during atmospheric reentry and retracting the aft sections for a controlled horizontal runway landing. Issued in November 2005, the patent covers technologies producing the desired amount of high aerodynamic drag along with low structural and thermal loads during atmospheric reentry. 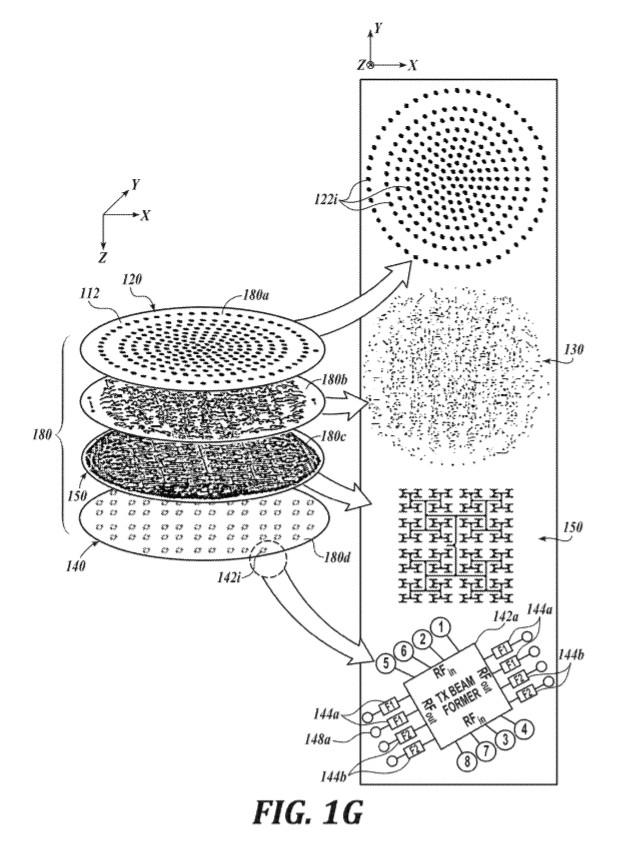 Although the summer space race has focused on Branson and Bezos, Elon Musk is certainly never far from the news headline cycle. While the other billionaires have been making strides towards getting more humans to space, SpaceX has been developing a Starlink satellite broadband Internet system that makes use of phased array antennas. Such antennas are designed to improve satellite communications by using a series of fixed antennas configured in such a way that steers radio frequency (RF) transmissions from a satellite to a receiver.

The technology covered by the ‘801 patent, which was issued to SpaceX this July, includes a phased array antenna system having an antenna lattice containing a plurality of antenna elements in a space tapered configuration, and a beamformer lattice containing a plurality of beamformer elements that are electrically coupled to the plurality of antenna elements. Advantages of this invention include the ability to increase bandwidth in satellite communications while reducing the weight, size, manufacturing costs and power requirements of the antenna array.

Niobium metal alloys have applications in the world of spacecraft because of its characteristics, including high strength and oxidation resistance at low weight. Photos available through Flickr identify the second stage nozzle of SpaceX’s Falcon 9 rocket as being composed of niobium metal alloy. C-103 niobium alloy has been employed in spacecraft construction for many decades, even being used in the main engine of the Apollo lunar module.

The ‘464 patent, issued last November to Space Exploration Technologies Corporation, claims a niobium metal alloy comprising vanadium as 5.75% to 12% of weight, hafnium as 5% to 13% of weight, titanium or zirconium as 0.25% to 2.5% of weight, and niobium as 77% to 85% of weight. Although C-103 niobium alloy can withstand high stress at elevated temperatures as well as high frequency levels at cryogenic temperatures, the resulting niobium alloy of the ‘464 patent has lower weight and improved operating temperature yield strength than the C-103 alloy.