“I agree with the general proposition across these four bills… But I also am concerned that we continue to protect the patent system itself…. Overly aggressive use of the tools created in this legislation could sweep up good actors as well as bad actors and could have unintended negative consequences,” – Senator Chris Coons 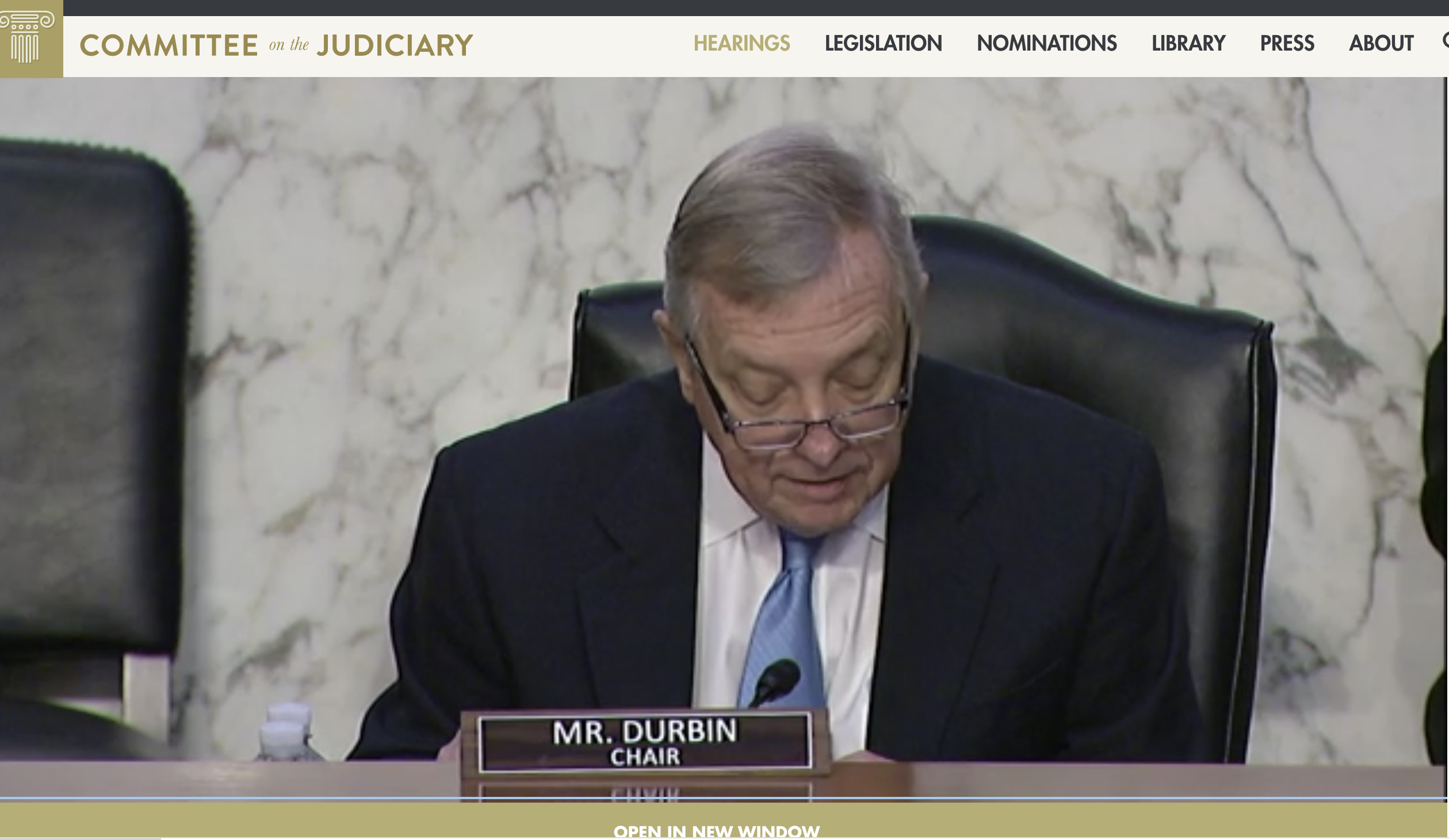 Earlier today, the Senate Judiciary Committee held an Executive Business Meeting in which the Committee discussed and favorably reported four bills aimed at reducing prescription drug prices for consumers and curbing perceived abuses of the patent system by brand pharmaceutical companies. The bills would do so by increasing the Federal Trade Commission’s (FTC’s) authority to initiate enforcement actions against drug companies.

The bills being considered are:

Senator Dick Durbin (D-IL), Chair of the Senate Judiciary Committee, opened the meeting with an explanation of the need for the bills. He said that nearly 40% of U.S. patients struggle to pay for medication. The world’s best-selling drug, Humira, brought in $16 billion in sales in 2019 and Humira manufacturer, AbbVie, has obtained 130 patents on the drug, with 90% filed after Food and Drug Administration (FDA) approval.

In another example, Durbin explained, insulin was first discovered 100 years ago, when the patent sold for $1.00, and in 2000 Sanofi’s Lantus insulin product was approved at a price of $35.00. “Since that time, [Sanofi] has obtained 45 follow-on patents to block competition, allowing the price to rise 25 different times to more than $350 today,” Durbin said. “These abuses are outrageous and it’s time that congress wakes up to it.”

The Stop STALLING (“Stop Significant and Time-wasting Abuse Limiting Legitimate Innovation of New Generics”) Act would enable the Federal Trade Commission (FTC) to deter abuse of the FDA’s citizen petition process by enabling the Commission to seek civil penalties. “Brand name companies and allies have been filing sham petitions raising dubious claims to stall entry of generics,” Durbin said. He cited one finding that brand firms filed 92% of “citizen petitions,” a procedure meant to allow citizens and companies to petition for changes to health policy. The bill’s sponsor, Amy Klobuchar (D-MN), said that the legislation is “a narrowly tailored solution that will deter companies from engaging in this sham petitioning activity”, which is “a waste of FDA resources at a time when they should be using their resources to approve new drugs and help people who are sick get better.” 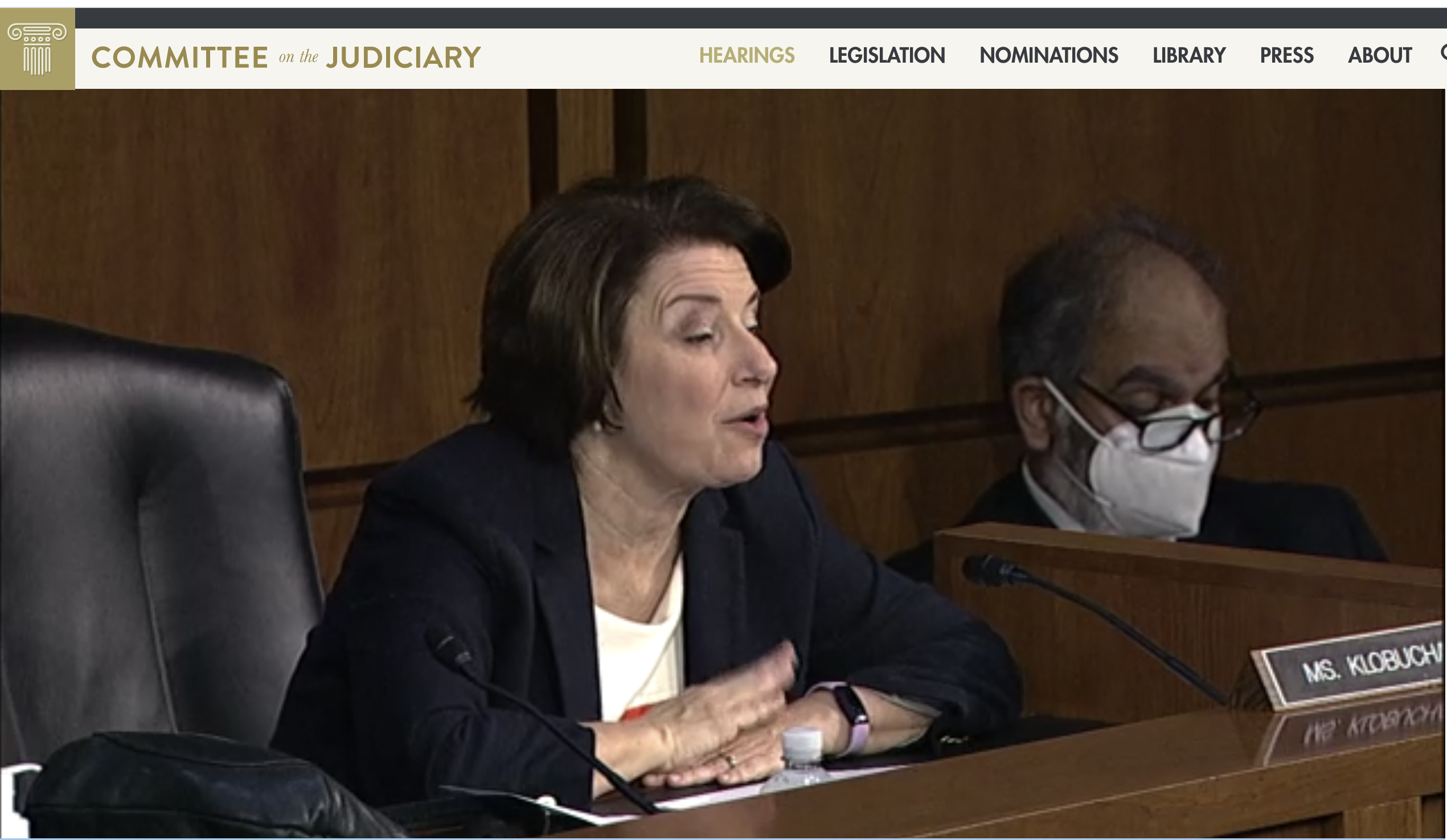 The Preserve Access to Affordable Generics and Biosimilars Act, targets the controversial pharmaceutical industry practice of paying generic drug makers to delay their entry into the market. The bill would prohibit such deals and presume them to be anti-competitive unless the parties can prove otherwise. Klobuchar explained the bill would strengthen the FTC’s ability to challenge these agreements in court and that it strikes the right balance by allowing companies  to still pursue agreements that do not harm competition. “The bill narrowly targets the type of settlement agreements that raise serious competitive concerns,” Klobuchar said.

Senator Mike Lee (R-UT) raised some concerns about this bill, though he ultimately said that he likes the bill and what it tries to accomplish. Lee said that the balance struck by the Supreme Court in FTC v. Actavis, Inc., 570 U.S. 136 (2013) seems to be working and that “fundamentally changing the underlying legal standards of the FTC’s current approach, as this bill appears to do, could risk upsetting the successful balance that we’ve struck between innovation and competition in the wake of the Actavis decision.” While Actavis acknowledged that pay for delay settlements could in fact violate antitrust laws, the rule of reason should apply in making this determination. Klobuchar’s bill, on the other hand, “creates a presumption that a company has unlawfully compensated a generic or a biosimilar to delay bringing the product to market if certain basic criteria are met.” 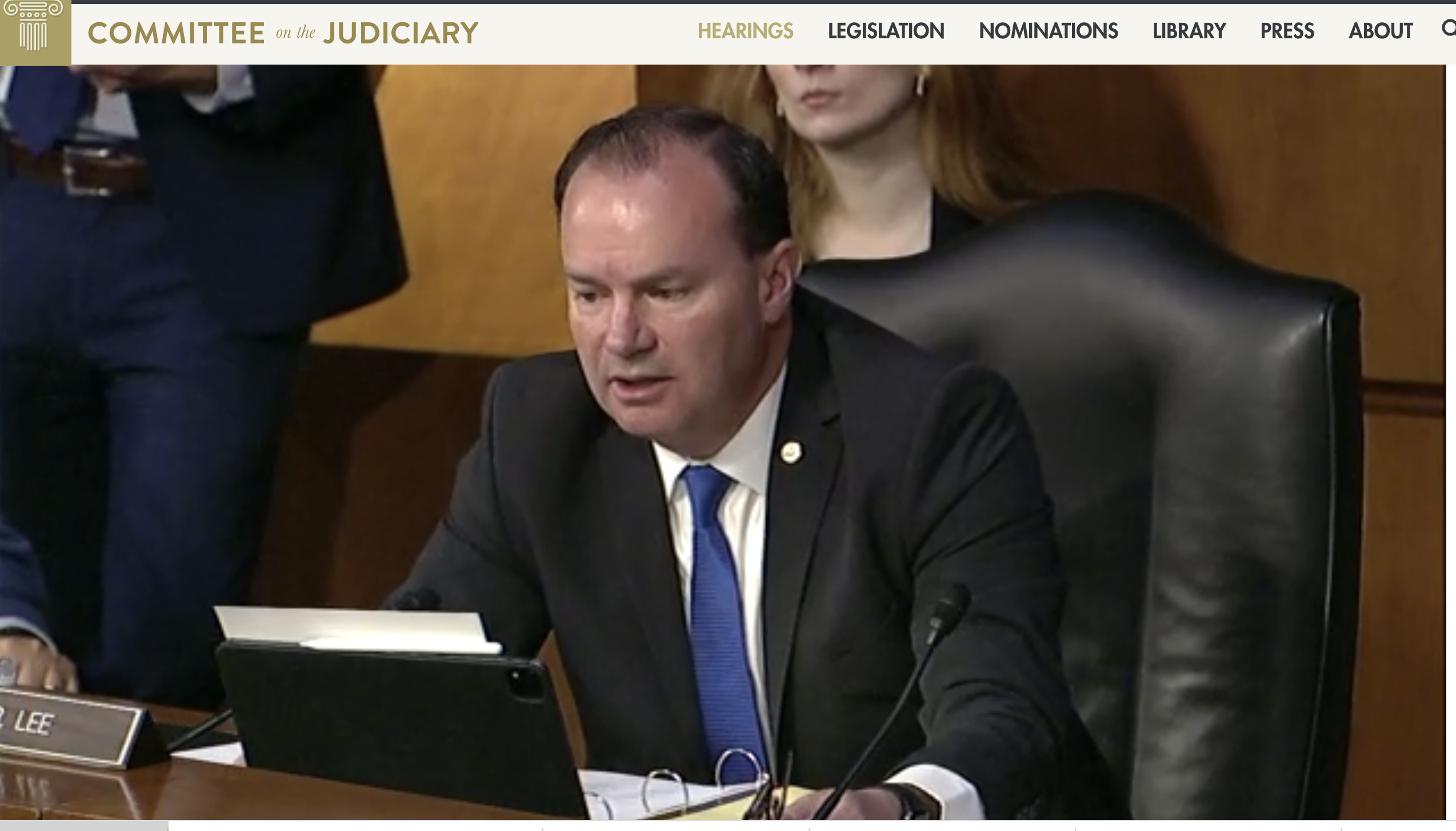 Lee thus offered a solution in the form of an amendment to change the evidentiary standard from a requirement for a showing of clear and convincing evidence to a preponderance of the evidence standard. The clear and convincing standard would mean that the company has to prove that it’s “substantially more likely that the company did not engage in pay for delay than that they did,” which “is an incredibly high standard for civil liability, especially in the context of trying to overcome a rebuttable presumption, and also inconsistent with the standard used in the Stop STALLING Act,” Lee said. Lee’s solution would require parties to prove that it’s more likely than not that the company did not engage in pay for delay and “would preserve this balance between innovation and competition.” Klobuchar agreed to work with Lee on the language, and Lee thus withdrew the amendment.

Grassley, also a co-sponsor of the bill, chimed in to express exasperation on the topic:

It seems to me like since the Constitution was written and [said] we want to promote innovation and the patent is for a number of years, what’s the big deal after you’ve run out of your patent? You want some sort of a scheme to continue to get the enrichment you did during the time that you had access to the patent? It seems to me just common sense—the marketplace takes over after that.

Durbin agreed, saying “it seems like common sense to me too, Senator.”

Prescription Pricing for the People

S. 1388, the Prescription Pricing for the People Act of 2021, directs the FTC to issue a report on the pharmaceutical supply chain and whether pharmacy benefit managers (PBMs)—the three biggest of which are CVS, Express Scripts, and UnitedHealth’s Optum—are engaged in anti-competitive behavior that raises consumer cost. Pharmaceutical companies have pointed to PBMs as part of the problem, as they tend to favor higher priced drugs with bigger rebates, and don’t always pass the rebates they’re given on to insurers, for example. The bill would also direct the FTC to make policy recommendations based on their findings.

This bill would empower the FTC to curtail drug “product-hopping.” Durbin explained that “this is an anti-competitive practice where brand manufacturers seek to extend their market exclusivity on an expiring patented drug by switching doctors and patients form an old version to a slightly modified new version – think Claritin D.” The bill would also amend the process for resolving patent infringement claims for biologic products, “known as ‘the patent dance,’” and  would put a reasonable limit on the number of patents a biologic company can assert in an infringement action to block entry of a biosimilar competitor. 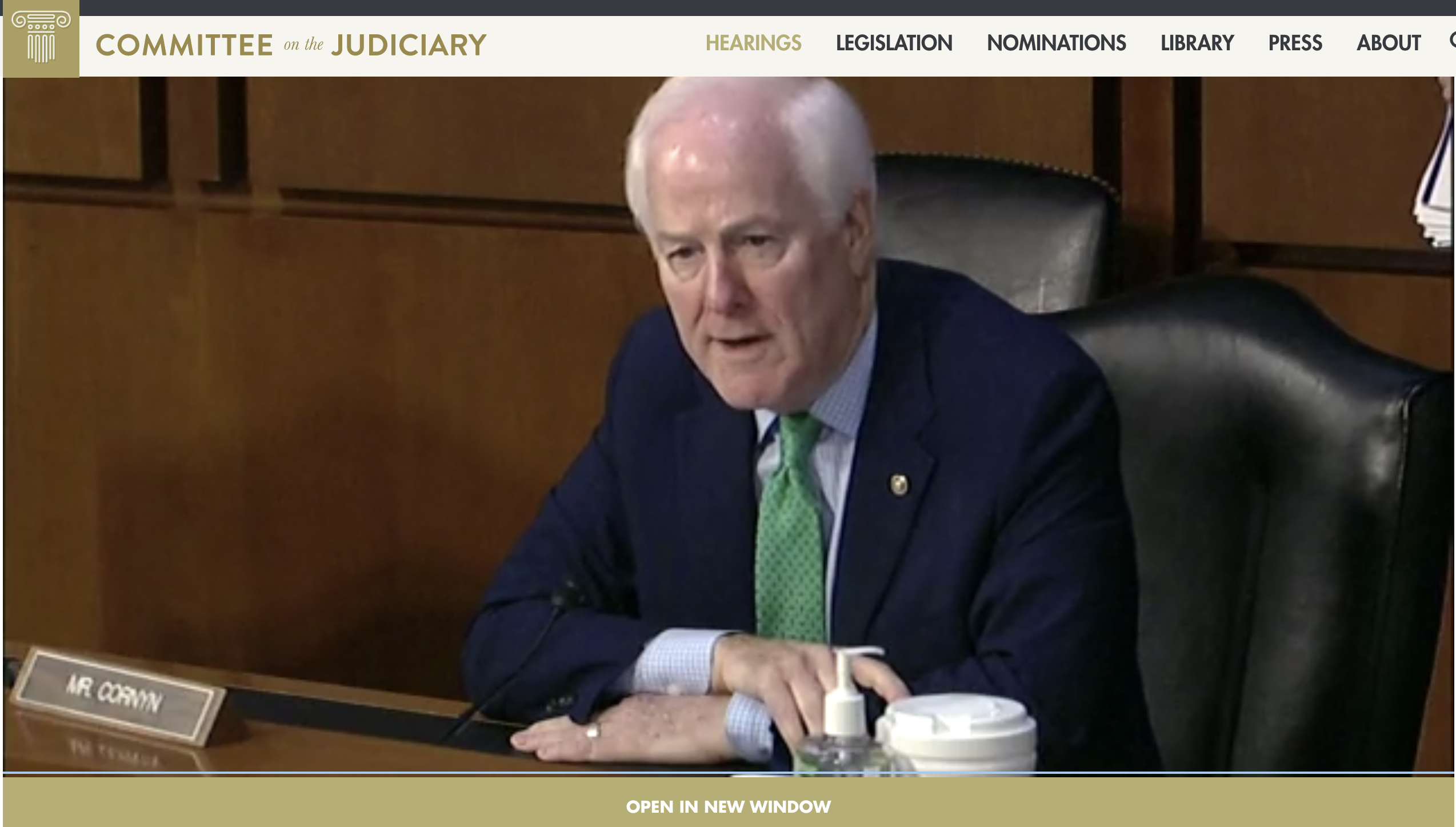 The bill’s sponsor, Senator John Cornyn (R-TX), pointed to the example of Humira, noting that, while the drug is the subject of more than 120 different patents in America, in Europe patients have access to five different competitors since 2018.

Senator Lee again warned about the dangers of swinging the pendulum too far toward stifling innovation and the process of making improvements to existing drugs. Lee said he feared the bill as written could do that, and thus presented three amendments, the first of which addressed the scope of the FTC’s rulemaking authority seeking to narrow it. “As most of you know, ensuring that we don’t recklessly cede our Article 1 authority to federal agencies is an issue I care deeply about,” Lee said. “I think that’s even more important in this instance due to the direction of the FTC under the current administration.”

Lee’s second amendment would ensure that companies that have been taken to court based on a presumption of anticompetitive behavior can justify that behavior by providing evidence if such evidence exists that the new product provides “ a meaningful improvement in safety or effectiveness or provides a meaningful benefit to patient care” as compared to the listed drug. “Much like we don’t punish auto manufacturers for updating their vehicles each year to fix glitches or inefficiencies in last year’s model, drug companies shouldn’t be punished for updating drugs to improve efficacy or safety, or other things that are important to consumers,” Lee explained.

The third amendment would tweak the definition of “follow-on product,” so that only those new drugs meant to treat an identical or substantially identical condition would qualify as a follow-on product subject to claims of product hopping.  “This will target bad actors while also protecting innovation patients so desperately need,” Lee said. Cornyn adopted this language and told Lee he would work with him on the additional amendments.

Senator Chris Coons (D-DE), who is the former Ranking Member of the Senate IP Subcommittee and has been active on IP issues for years, weighed in toward the end of the meeting to echo Lee’s warnings about targeting bad actors at the expense of innovation:

I agree with the general proposition across these four bills… But I also am concerned that we continue to protect the patent system itself, this constitutionally created property right that I think is critical to innovation and our competitiveness globally. Overly aggressive use of the tools created in this legislation could sweep up good actors as well as bad actors and could have unintended negative consequences, and I look forward to working with the co-sponsors to avoid that.

The patent system is very complicated and every time we make a change to the patent system it can lead to unintended consequences. The effect could be to reduce the incentive to innovate and invent the next generation of better, safer drugs. 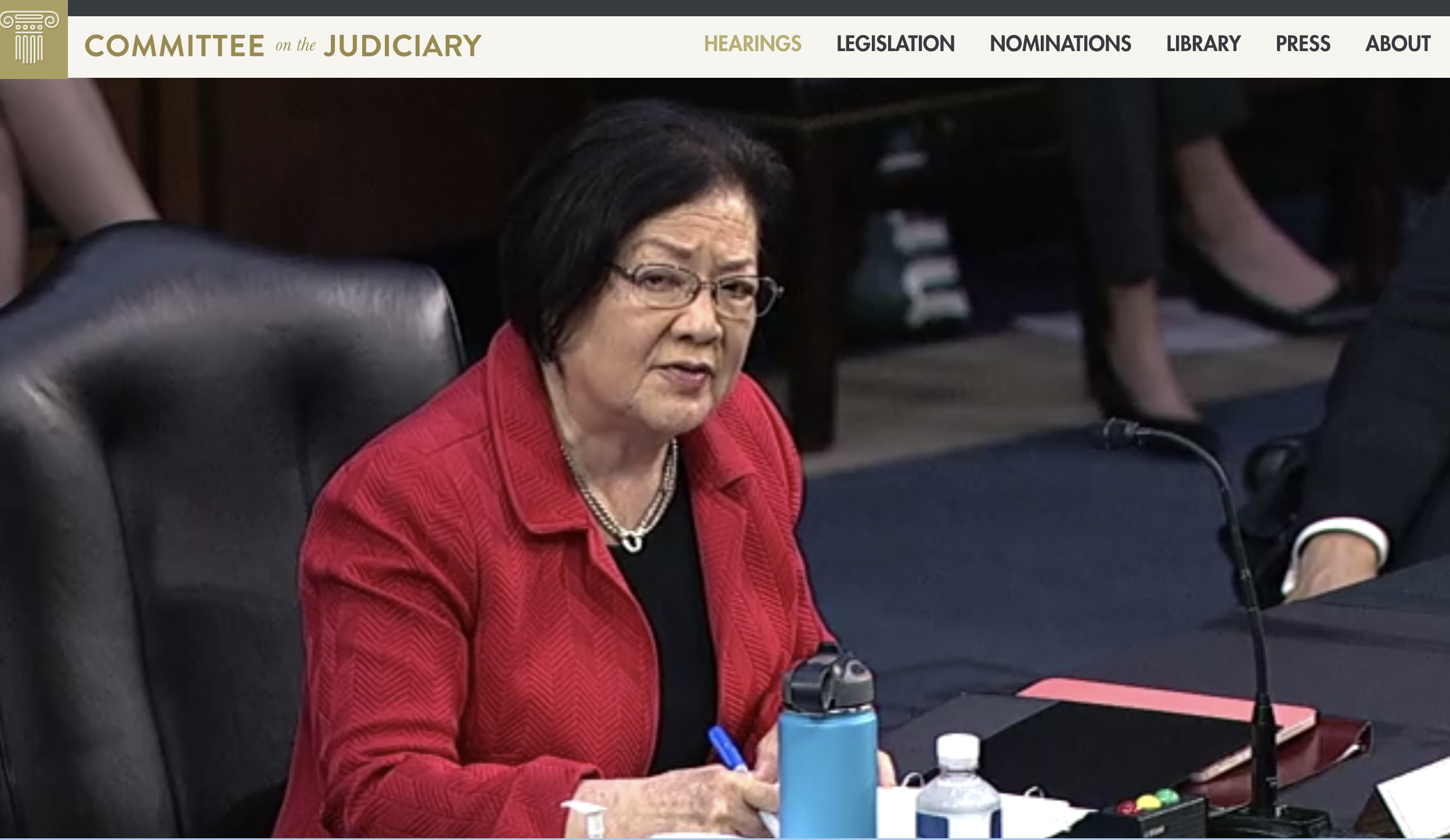 Senator Richard Blumenthal (D-CT) added that, while we need a strong patent system, “what we’ve seen is generics have been kept off the market, innovation has been stifled because of the abuses in the patent system’s enforcement and the exploitation of some of the loopholes.” He continued: “What we’re essentially trying to do here is make the patent system stronger by validating new products, innovation and generics so they can come to market and reduce the costs of pharmaceutical prices.”

All four bills were favorably reported to the Senate floor.