“The [IP Waiver] is masking the discussion of equitable distribution of vaccines. Countries are hoarding vaccines. Governments should not be hiding behind the issue of IP waivers.” – Andrei Iancu 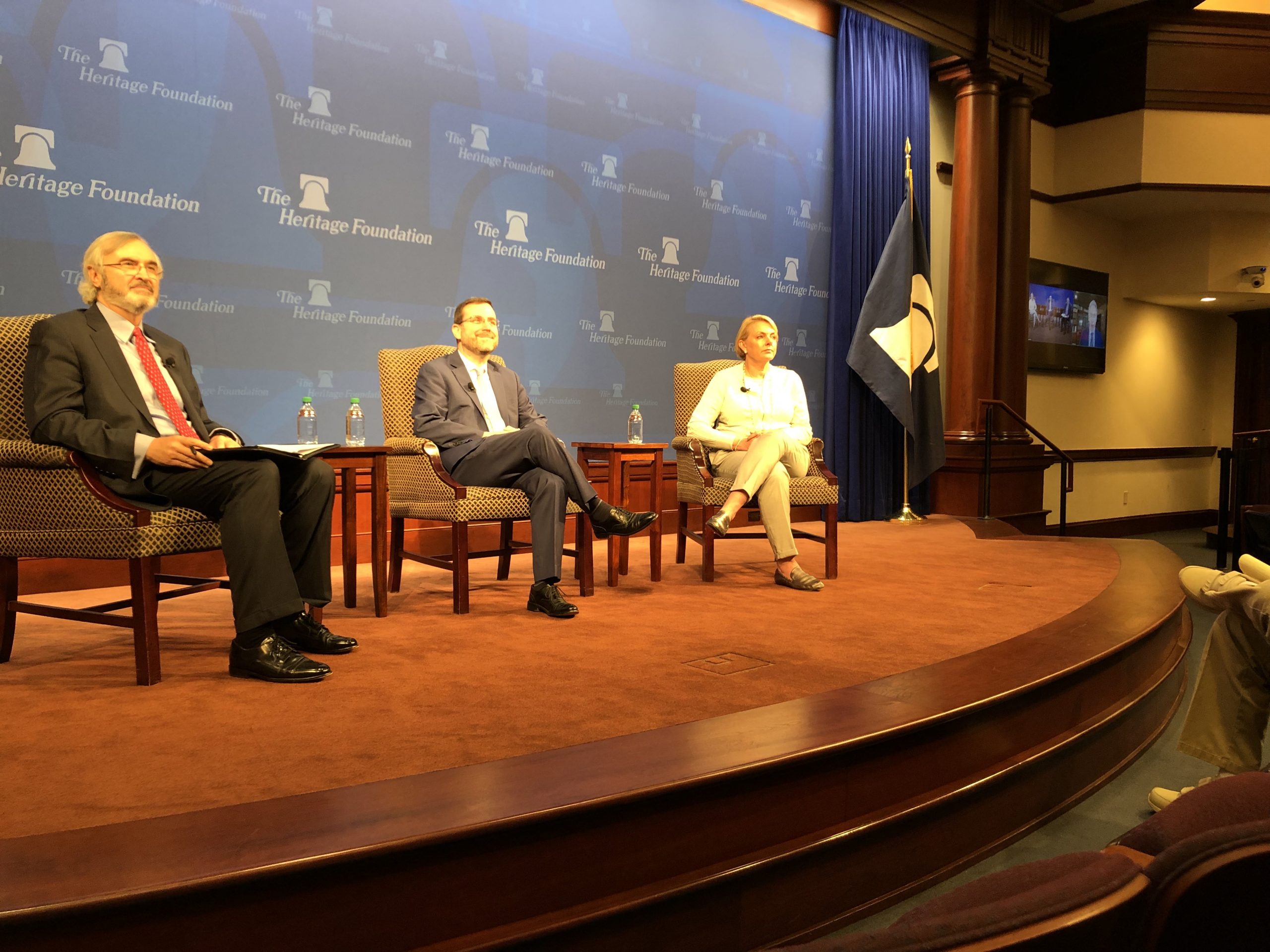 From Left: John Malcolm, Adam Mossoff and Laurie Self

At today’s Heritage Foundation event in Washington, D.C., titled Restoring American Leadership in Patent Law and Innovation Policy, former U.S. Patent and Trademark Office Director (USPTO) Andrei Iancu began by lamenting the failure of decision makers to make the connection between intellectual property and innovation. Increasingly, policy makers think innovation just happens, Iancu explained, with too many believing monetization happens after the fact, rather than driving innovation. “Without IP, the free market does not participate, or does not participate to scale,” Iancu told the Heritage audience.

Laurie Self, Senior Vice President and Counsel, Government Affairs, Qualcomm, agreed with Iancu and added that, without a strong patent system, there is no opportunity to maintain a strong innovation leadership position. Presumably alluding to developments such as the Biden Administration’s support for waiving IP rights under the Agreement on Trade-Related Aspects of Intellectual Property Rights (TRIPS) related to COVID-19 inventions and the recent Executive Order on Competition, Self said: “We are seeing a series of policies that if implemented would undermine our system… this cognitive dissonance is a threat.”

Adam Mossoff pointed out that today is an “auspicious day” because it was July 20, 1969 that man first stepped on the moon—a feat thought impossible only a decade earlier. The accomplishment, he said, was the result of a great many patented inventions.

“Patents provide a bridge from the act of creation into the marketplace… time and time again, patents are shown to bridge the so-called ‘valley of death’, and that is only possible if patents are a property right,” Mossoff said.

To the question raised by moderator John Malcolm, Vice President, Institute for Constitutional Government, about those who argue that patents last too long and don’t spur economic activity, Iancu said: “I’d say ‘where is their evidence?’ The burden is on them.” After discussing examples of innovation dating as far back as to the time of Alexander the Great, Iancu would concluding this segment of his remarks saying: “It is incumbent on them to provide the evidence, despite the millennia of evidence to the contrary. They need to provide evidence that their proposals will work at least as well [as the current intellectual property system].”

As one data point that supports the premise that patents support economic activity, Iancu pointed to something he has mentioned before; namely that the approval of a startup’s first patent increases its employment growth over the next five years by over one-third.  Self took the moment to point to the stark contrast in economies between those countries with a strong patent system and those that do not have a patent system, a point IPWatchdog has made numerous times. In fact, if you cross reference the top performing economies from an innovation standpoint according to the WIPO Global Innovation Index with the top performing IP economies from the U.S. Chamber annual report, you see the countries at the top of both lists (i.e., Switzerland, Sweden, United States, United Kingdom, Netherlands, Denmark, Singapore, Germany, Korea) have robust economies and sophisticated IP systems. On the other hand, when you look at the lowest performing economies you similarly see overlap (i..e., Pakistan, Algeria and Nigeria).

Turning to the debate around waiving IP rights for COVID-19 inventions under TRIPS, the panelists said implementation of the waiver would raise some serious questions for U.S. patent law. “If the [World Trade Organization] were to adopt the waiver, [the United States] would need to implement it, and there would be significant questions of takings,” Mossoff said, before pointing out that there is no evidence that any patents or rights have stood in the way of any COVID-19 vaccine being created or delivered.

To the contrary, industry has responded, and the mRNA vaccines were so radical as they were being originally developed in the 1990s that “they were not able to get grants,” Mossoff exclaimed. “They had to turn to the venture capital market for funding,” he added, refuting the falsehoods associated with the notion that the government paid for the creation of mRNA vaccines.

In a recent LexisNexis Patentsight webinar, for example, panelists provided evidence of patents dating back to 2003-2008 relating to mRNA technologies, thus dispelling the notion that government paid to create COVID-19 vaccine technologies. The technologies are merely outgrowths of decades of R&D conducted by the brand pharmaceutical companies.

“The [IP Waiver] is masking the discussion of equitable distribution of vaccines,” Iancu said, emphatically. “Countries are hoarding vaccines. Governments should not be hiding behind the issue of IP waivers.”