“The fact of the matter is the U.S. intellectual property system does rank #1 in the world, and under the Trump Administration, the U.S. patent system has risen in the rankings from embarrassing lows.” – Gene Quinn

The U.S. Patent and Trademark Office (USPTO) doesn’t often get much action on social media, but last week, five days before the U.S. Presidential election, the Office came under fire for its social media posts touting the United States’ record on intellectual property under the Trump Administration. The posts featured the following quote from USPTO Director Andrei Iancu: “Just a reminder, under President Trump’s leadership, the U.S. intellectual property ecosystem ranks #1 in the world, according to the 2020 International IP Index.” 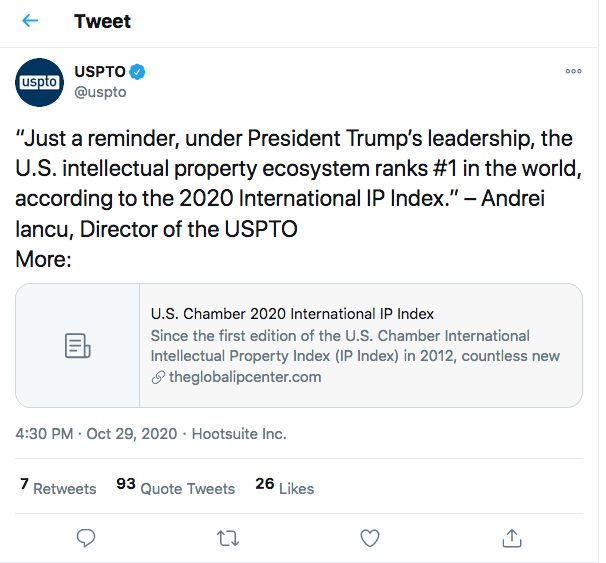 Commenters on Twitter immediately criticized the statement, calling it “wildly unnecessary,” “completely inappropriate,” and “disgraceful,” among other descriptions. The post was also shared on LinkedIn and Facebook, where it received similar criticism. It was shared 100 times on Twitter; most of the Office’s posts receive 5-10 shares on average. 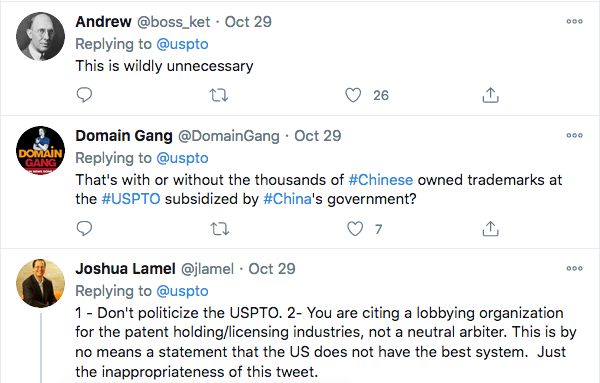 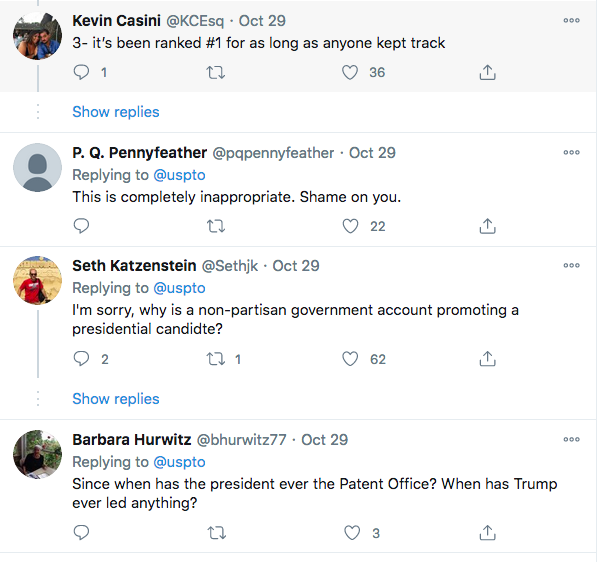 The U.S. Chamber of Commerce’s International IP Index has ranked the United States #1 in IP protection every year since 2012, when Barack Obama was President.

“The Twitterverse characterizing something as ‘completely inappropriate’ and ‘disgraceful’ is par for the course,” said Quinn. He added:

It is hard to see how the truth is ‘disgraceful’ in a world where politicians lie and mislead as often as they tell the truth, but this type of thoughtless commentary is unfortunately what passes for erudite in the social media echo chamber circa 2020. The fact of the matter is the U.S. intellectual property system does rank #1 in the world, and under the Trump Administration, the U.S. patent system has risen in the rankings from embarrassing lows. The industry knows the patent system has risen thanks to the leadership of Director Iancu. Anyone saying anything different is wrong, period.

The USPTO told IPLaw360 and other outlets that the statement was not meant as a political endorsement: “We disagree with those who would inject partisan politics into the message of the tweet, which is simply to highlight the continued excellence of the American innovation ecosystem,” the Office said. As of today (November 3/Election Day), the post has not been taken down.

Dennis Crouch of PatentlyO said the tweet wasn’t a “big deal” and “only barely a violation of norms if at all. Trump has been president for four years, and his administration should get some credit for maintaining the #1 ranking.”

Crouch pointed to a USPTO tweet from October 2014 promoting Obama’s mention of innovation—though one might say it’s hard to argue that a tweet publicizing real time remarks on innovation in a non-election year is an apt comparison to a tweet implying the country’s #1 ranking on IP can be attributed to the President, five days before the general election. 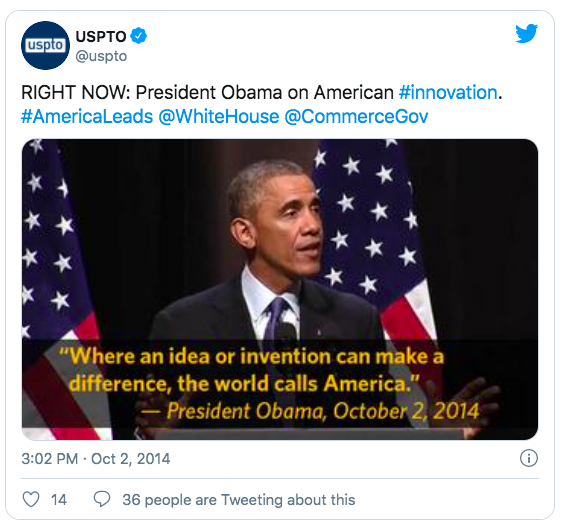 According to a memo sent by Todd Willens, Chief of Staff to Department of Interior Secretary David Bernhardt, in March 2020, “Under the Hatch Act, ‘political activity’ is defined as any activity directed toward the success or failure of a political party, candidate for partisan political office, or partisan political group.” The memo continues:

When using social media platforms such as Twitter, Facebook, LinkedIn, etc., Department employees should be mindful that prohibitions of the Hatch Act apply. Accordingly, the Hatch Act prohibition on engaging in political activities while on duty or in a Government office applies to all social media and other online activities. Employees are prohibited from “posting,” “blogging,” “retweeting,” and “liking” partisan political content while on duty.

Despite the criticism of the posts and Iancu in this instance, most in the IP community have championed the current USPTO Director’s efforts to streamline and improve U.S. patent examination and post grant proceedings. Iancu has provided guidance on patent eligibility law that has created welcome clarity for applicants, although his approach has not been adopted by the courts; has harmonized standards at the PTAB with the courts; and has implemented standards for discretionary denial of inter partes review institutions when there is parallel litigation in district court via precedential designations of final written decisions.

As the posts remain up, it’s unlikely the Office is concerned they are a violation of the Hatch Act or other rules.