The chances of securing an allowance to protect AI innovations vary dramatically across art units and time periods. Interestingly – for the first time since Alice – one recent allowance drop seems to be divorced from eligibility-rejection prevalence. 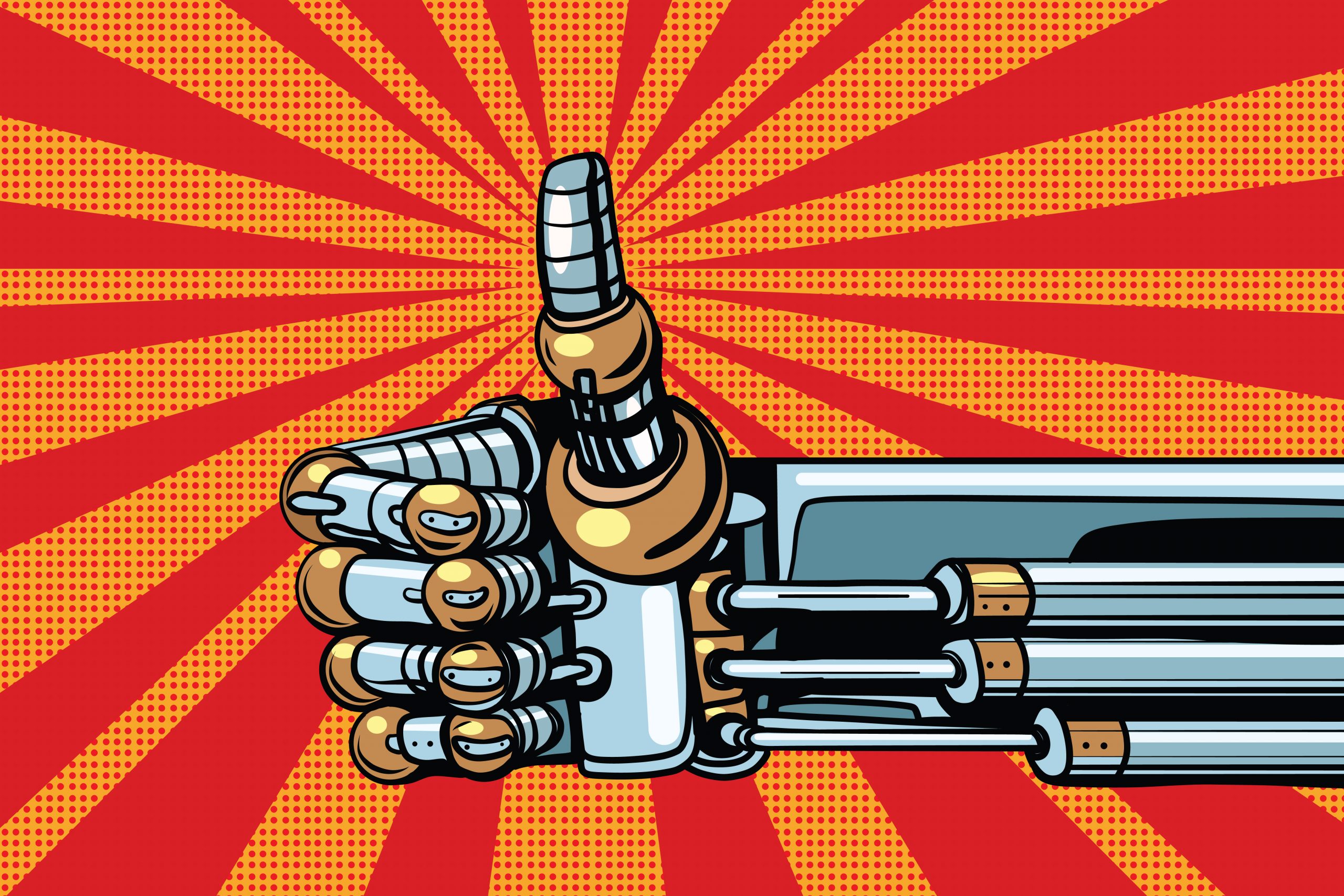 As computing power and large datasets become more available, the use of artificial intelligence (AI) in technology is exploding around the world. As an indicator of the impact of AI, private equity investment in AI start-ups attracted 12% of worldwide private equity investments in the first half of 2018, reflecting a four-fold increase from just 3% in 2011, across all major economies. In the United States, the U.S. Patent and Trademark Office (USPTO) has taken steps to adapt to AI inventions, asking in August of 2019 for public comment on questions ranging from AI inventorship to how to best consider AI elements of inventions. The World Intellectual Property Organization (WIPO) has also asked similar questions, as part of its conversation on intellectual property (IP) and AI, which published its first Draft Issues Paper on IP policy and AI in December of 2019 and is continuing to hold meetings on the topic.

Artificial intelligence is a term that applies to various types of computers operating in a manner that mimics human intelligence. It includes rules-based approaches and machine-learning techniques. AI innovations may include new types of AI techniques (e.g., new neural network designs) or new applications of existing AI techniques (e.g., identifying particular data feeds, training, pre-processing, post-processing, etc.) that may avail AI to new problems. Because AI is quite a broad term, AI technology can be found in almost every industry. Some feel that all innovations in select fields (e.g., natural language processing, autonomous driving, image processing, machine translation, bioinfomatics and computer animation) qualify as AI innovations.

Given this diversity among technologies that qualify as “AI innovations”, does it make sense that the USPTO, WIPO and many stakeholders still organize discussions focused on this area? Or, is the topic too broad to provide for coherent and substantive discussion? To explore these issues, we tracked examination statistics for each of three types of AI innovations to determine how homogeneous the field is, at least with respect to patenting prospects at the USPTO.

Examination statistics were collected (from LexisNexis® PatentAdvisorSM) for each of the following AI fields: AI techniques (class 706), bioinformatics (art unit 1631), and image analysis (class 382). Examinations statistics for business methods (class 705) were also collected for comparison purposes. Examination statistics included, for each of multiple time periods: a number of allowances issued, a number of office actions issued, and a number of office actions issued that included a patent-eligibility rejection.

To monitor the extent to which examiners in particular areas during particular time periods were likely to allow a patent application, we tracked the percentage of actions that were allowances (as opposed to office actions). This statistic had the benefit of being quite independent from applicants’ decisions as to whether to abandon an application (as it may take many months to years for applicants to react to sharp declines in allowance prospects with abandonment, if they do at all). This statistic is generally lower than the traditional allowance rates, as most allowances follow multiple office actions.

Figure 1 shows the time series for the percentage of actions that were allowances for each of the AI class (blue line), bioinformatics art unit (green line) and image-analysis class (purple line). The bioinformatics allowances experienced a sharp drop following the Alice v. CLS Bank decision in 2014 (which mirrored a similar post-Alice drop in the business-method class, shown in the red line). Neither of the other AI classes experienced this drop. However, allowance prospects in the AI class did substantially drop following the Electric Power Group Federal-Circuit decision of 2016. Meanwhile, allowance prospects of the image-analysis class have remained quite steady (or potentially modestly increasing) over the last eight years. 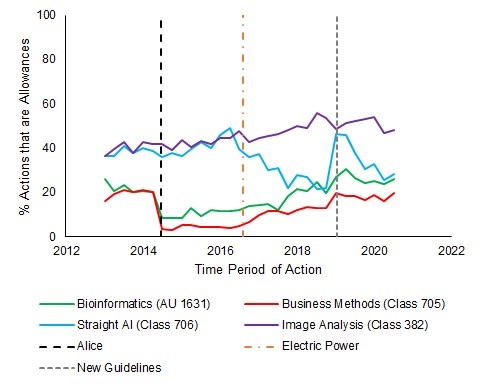 The vast majority of the above-noted allowance shifts appear to be attributable to changes in the prevalence of eligibility rejections, which may – for a given technology area – change in response to new court cases that pertain to similar technologies. For example, the Electric Power Group decision may have triggered training and/or guidance provided to examiners in class 706. 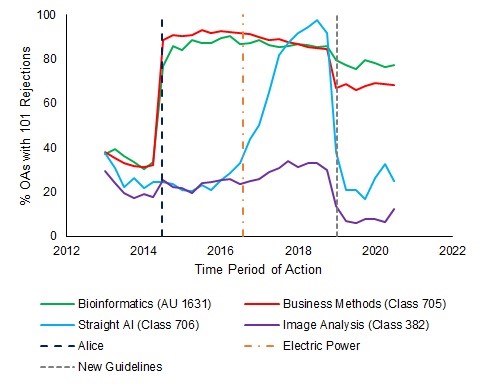 There is one discrepancy to this potential anti-correlation. In early 2019, allowances in the AI class jumped (following new USPTO guidance pertaining to patent eligibility) and then began to slowly and substantially decline. While the initial allowance jump was accompanied by a fall in eligibility rejection, the subsequent allowance decline (in 2019 and early 2020) was not accompanied by an increase in eligibility rejections.

So, if not for the eligibility requirement, why were more AI applications being rejected? Potentially, more disclosure-related rejections were being issued. Machine-learning results can depend greatly on training data, hyperparameter selection, pre-processing, techniques, etc. Thus, it would be conceivable that the USPTO began to require more detail in this respect to fulfill the enablement or written-description requirements. To investigate this possibility, we tracked the percentage of office actions that included a 112(a) rejection (Figure 3). A modest increase in 112(a) rejections were observed in the AI class. However, the trend did not track the magnitude or temporal shifts of the recent allowance-rate decrease for this class. 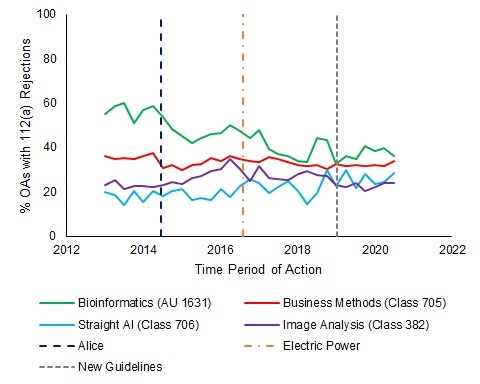 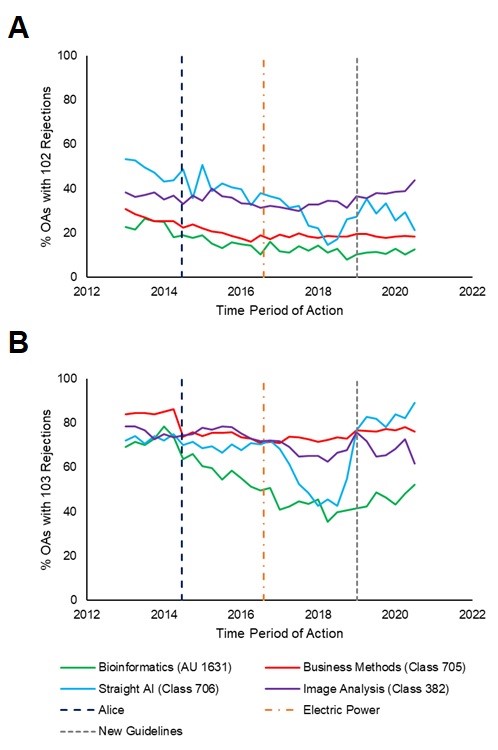 Our data for the years between 2013-2020 show that the prospects of patenting an AI innovation varies dramatically across art units. Similar variation is seen in data showing the likelihood of receiving a particular type of rejection (e.g., an eligibility rejection). AI is an incredibly large and diverse field, so some statistical variation in rejection prevalence across art units may make sense. For example, certain AI technologies may be popular in a field during a given period of time, leading to more prior art being available relative to other types of AI technologies. As another examples, particular AI innovations may be more clearly tied to a practical application that may indicate that the claims are patent eligible.

That being said, the examining division appears to have a sizeable influence on prosecution outcome. For this reason, we suspect that some of the variation is due to differences in training and cultures across art units. For example, as noted, image-processing applications are unlikely to receive eligibility rejections, which is perhaps due to a “practical application” tied to the claimed invention. However, would this same logic not apply to bioinformatics inventions? Why, then, in Q2 2020, would 77% of office actions issued by the bioinformatics art unit (AU 1631) include an eligibility rejection, whereas only 12% of the office actions issued by the image-analysis class (Class 382) including an eligibility rejection?

Returning to the question at hand: What’s the likelihood that an AI patent application will be allowed at the USPTO? The high variability across time periods and art units that we observed in both allowances and rejections defies a direct link between inclusion of AI technology and a given outcome at the USPTO. For this reason, it is impossible to predict the likelihood of an AI patent application being allowed at the USPTO. Prudent applicants and practitioners would thus be well-advised to track both high-level data and data pertaining to particular examiners.

Leron Vandsburger , Ph.D., is a patent attorney at Kilpatrick Townsend & Stockton LLP. His practice focuses on patent prosecution and counseling in the areas of materials processing, electronics, and software. Prior [...see more]