“The petition characterizes the questions presented as being ‘of exceptional importance’, as they touch on ‘important federal questions concerning the balance between the powers of the state and federal [courts] in resolving patent law issues.'” 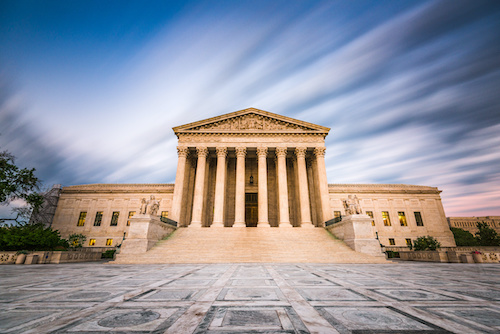 Greenberg Traurig and The Rader Group – which is headed by retired Chief Judge of the U.S. Court of Appeals for the Federal Circuit, Randall Rader – have submitted a petition for certiorari to the U.S. Supreme Court on behalf of Acer America Corp. asking the Court to review the CAFC’s precedential opinion in Intellisoft v. Acer. On April 3, the CAFC held that the United States District Court for the Northern District of California (the district court) erred in refusing to remand a case to California state court where removal to a district court was improper under 28 U.S.C. § 1441 and §1454. Despite Acer’s contentions, the CAFC found that Intellisoft’s trade secret misappropriation claim did not “necessarily” raise patent law issues that would result in district court original jurisdiction.

Intellisoft allegedly shared with Acer trade secret information regarding its computer power management technology as part of a business agreement subject to a non-disclosure agreement (NDA). Under the NDA, Acer was restricted from “manufactur[ing] parts or components incorporating the Confidential Information.” Acer later applied for and became the owner of U.S. Patent No. 5,410,713 (“the ’713 patent”), which was directed to power management system for a personal computer including a power management processor, a switchable power supply and a keep alive power supply. In 2014, Intellisoft filed suit against Acer in a California state court asserting that Acer misappropriated their trade secrets by disclosing them in the ’713 patent and related patents and, in 2017, Acer removed the action to the district court, arguing that the district court had original jurisdiction because Intellisoft’s state law claim for trade secret misappropriation arose “under federal patent law—specifically, 35 U.S.C. § 256.” Acer’s basis for section 1454 removal was its cross-complaint that alleged a patent inventorship claim.

Intellisoft moved to remand the action to state court, asserting the state trade secret claim did not require determination of inventorship under federal patent law and Acer’s cross-complaint was not “’[o]perative’ due to Acer’s failure to obtain leave of court.”  The district court denied a motion by Intellisoft to remand the action to state court, holding that section 1441 removal was proper because the case “boil[ed] down to an inventorship dispute” and “the statute did not require the patent counterclaim to be pleaded in an operative pleading.” Intellisoft appealed to the CAFC asserting that removal was improper and requesting a remand to the state court.

The CAFC found that Intellisoft’s trade secret misappropriation claim did not “necessarily” raise patent law issues that would result in district court original jurisdiction. The CAFC also held that removal was not proper under section 1454 because Acer’s inventorship counterclaim was not a legally operative pleading when Acer removed the action. Thus, the CAFC vacated the district court’s judgment and reversed the denial of Intellisoft’s motion to remand.

In particular, Acer is asking the Supreme Court to consider the following questions:

(1)        Where Plaintiffs’ theories of trade secret ownership, misappropriation, and damages depend on deciding the patent law issues of inventorship, claim construction, and infringement, does Plaintiffs’ claim “necessarily arise,” under Gunn v. Minton, 568 U.S. 251, 258 (2013), from patent law, thereby justifying removal under 28 U.S.C. §1451, of the claim to district court?

(2)        May a state court control jurisdiction over a federal patent law claim and removal under 28 U.S.C. §1454 by declining to make the notice of removal “operative” under state court procedures in contravention to Congress’ intent as implemented in the American Invents Act and risking uniformity in application of patent law principles?

With respect to the first question, Acer asserts in the petition that the CAFC reached a result that was inconsistent with Gunn v. Minton, ignored the substance of the plaintiff’s claims, as well as the district court reasoning. Noting that the CAFC “concluded that this case does not ‘necessarily raise substantial patent law issue[s]’”, the petition explained that the CAFC “perceived that plaintiff’s only ‘burden was to satisfy the ownership standards for trade secrets under California law rather than to prove [who] is the inventor of the ’713 patent.’” However, Acer noted, the “‘trade secret’ issue and the patent inventorship issue were synonymous.”

With respect to the second question, the petition argues that the “CAFC rendered 28 U.S.C. 1454 inoperable by misconstruing its language and disregarding its express purpose.” In particular, the petition noted that the America Invents Act (AIA) added Section 1454 in order to allow removal based on a patent counterclaim; thus, “Congress clarified that it is the federal courts that should handle patent counterclaims.”

Reasons for Granting the Petition

The petition characterizes the questions presented as being “of exceptional importance”, as they touch on “important federal questions concerning the balance between the powers of the state and federal [courts] in resolving patent law issues.” The decision: “(i) is contrary to the balance set by the Supreme Court and Congress and (ii) risks inconsistent rulings from the state and federal courts on the patent issues raised by Respondents,” explains the petition.

The Federal Circuit relied chiefly upon the absence of the state court’s permission to petitioners to file a counterclaim in deciding that removal to district court was not improper. But Supreme Court case law in Shamrock Oil & Gas Corp. v. Sheets et al. contradicts that approach. Further, Intellisoft’s chief argument centers around claim construction claim construction and patent infringement, so “the state’s ultimate judgment will inevitably turn on its determinations of patent law issues.” This could result in inconsistent rulings in state and federal courts when the patent is enforced going forward, and the state’s determinations will not be subject to Federal Circuit review, thus risking “jurisprudential inconsistencies with the Federal Circuit’s body of patent law.” The petition added: “This is the very risk that the Federal Circuit was created to avoid.”

The petition goes on to detail how the CAFC flouted the precedent set by Gunn v. Minton, which makes clear that “the first consideration for deciding if a district court has jurisdiction over a state law claim is whether ‘a federal issue is: (1) necessarily raised.’” In the present case, says the petition, “the only basis for [the] claims necessarily raises and indeed depends on patent issues.”

Finally, the petition sets forth a number of ways in which the CAFC improperly interpreted Section 1454, which outlines the law governing  district court removal—particularly by conditioning removal upon approval of the state court.

Urging the High Court to take this opportunity to ensure the boundaries between state and federal jurisdiction “are faithfully applied,” the petition concluded: “In an era of growing numbers and significance of trade secret cases, the intersection with federal law will create many more potential collisions.”