Everyone agrees that the 2014 Alice v. CLS Bank decision dramatically changed courts’ approach to patent eligibility analyses under Section 101. Six years later, the Federal Circuit has issued enough opinions on the issue to allow for quantitative analysis to aid patent practitioners before that venue.

We gathered our data set by reviewing every Federal Circuit decision addressing Section 101 since the Supreme Court’s Alice ruling. We tracked the judges’ individual Step 1 and Step 2 votes in each case and the ultimate panel decisions. We also recorded the opinions’ authors and the authors of any dissents, and which decisions were per curiam.

Numerous cases involved independent analyses of different groups of claims. In those circumstances, we coded the votes on each claim or group separately. As a result, some cases ended up with multiple votes by a single judge being recorded on both Step 1 and Step 2.

The Federal Circuit as a Whole 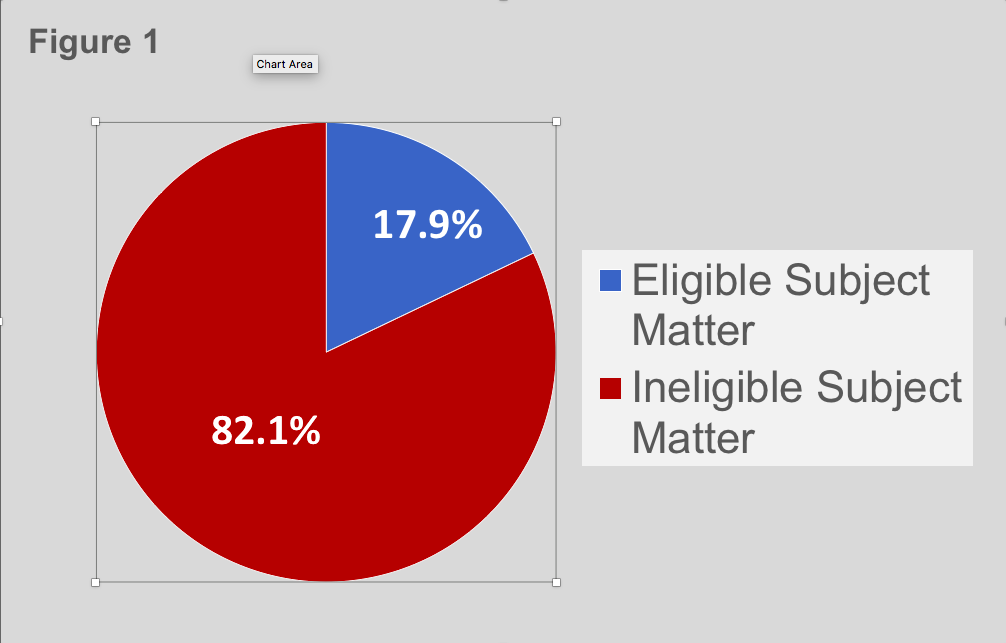 Individual voting skewed even further against eligibility. Individual judges voted for Step 1 ineligibility at a rate of 83.9% and for eligibility only 16.1% of the time. The difference shows that patent-eligible opinions were more likely to draw dissents than decisions holding the claims directed to ineligible subject matter. 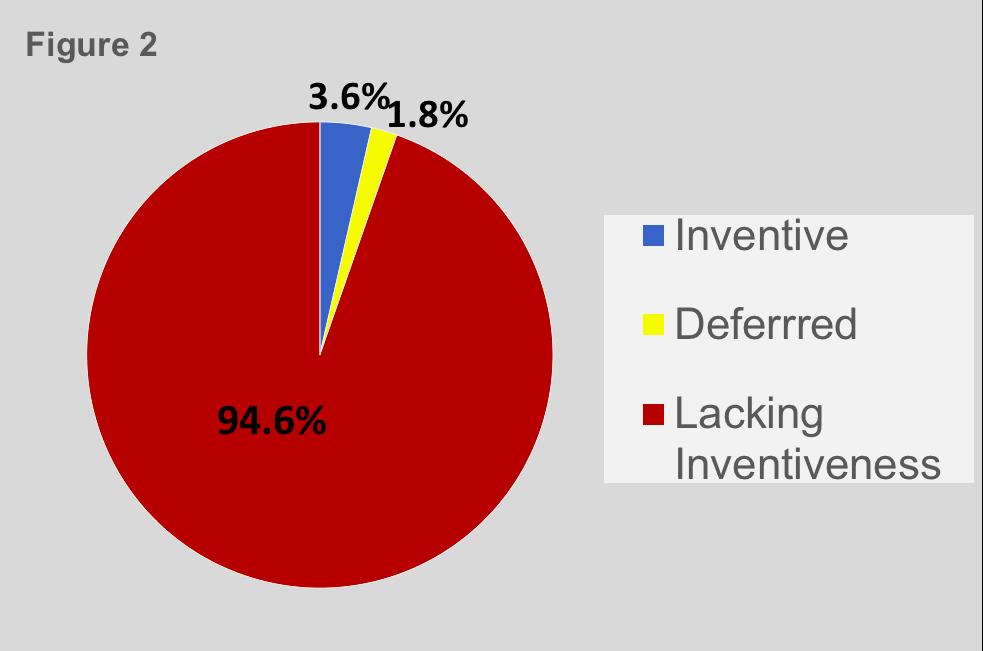 The combined result of the Federal Circuit’s Step 1 and 2 analyses is an overall invalidation rate of 78.8%, a Step 2 deferral rate of 1.5%, and a validation rate of 19.7%. Of these decisions, 20 were per curiam opinions of invalidity, but the Federal Circuit has not issued any per curiam opinions of patent eligibility. The resulting message is that Section 101 invalidity is much more likely to be a straightforward, uncontroversial outcome than validity.

The data undermine the most obvious explanation for these high rates: that they reflect review of an inordinate number of patents already found invalid by a district court. District court invalidity determinations, particularly those at the pleading stage, reach the Federal Circuit more quickly than validity determinations, which allow the case to proceed. Were that the reason, those invalidation rates would drop over time as the patents district courts found valid reached the Federal Circuit. Yet, considering cases only from the 2018 Berkheimer decision and beyond shows almost no change in these rates, with what little change there is attributable to the introduction of the deferral outcome, not to increased validity holdings: 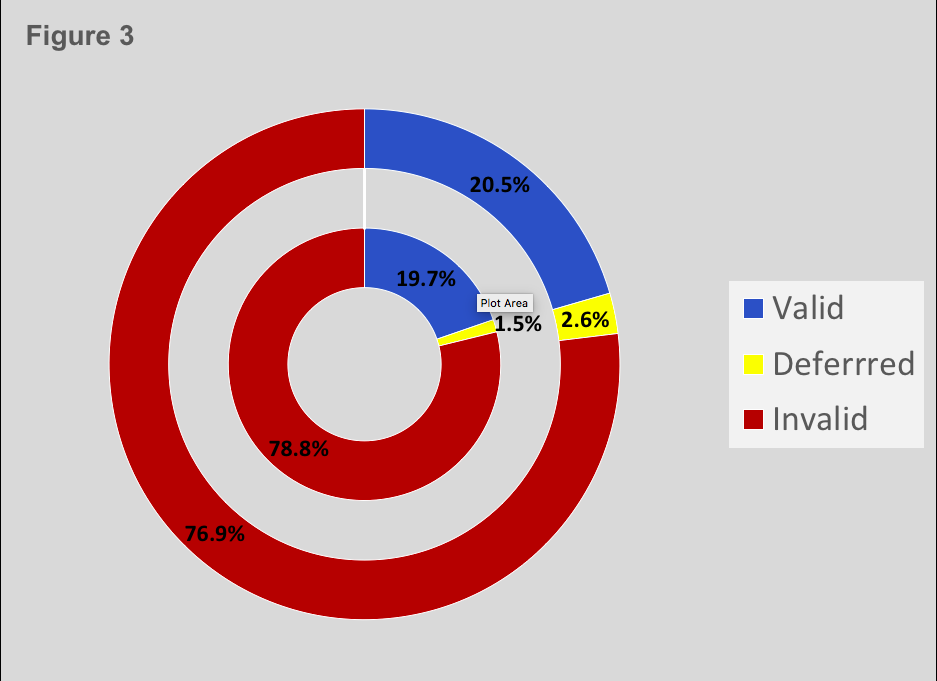 The degree to which the Federal Circuit has favored Section 101 invalidity over validity, therefore, should be surprising to both patentees and alleged infringers. Most of these cases arise from litigation, where the presumption of validity applies, requiring proof of invalidity by clear and convincing evidence. In addition, one would expect that only patent owners who believed they had a reasonable chance of success on this issue would bear the costs of a Federal Circuit appeal; those with obviously invalid claims would be unlikely to take it that far.

The other lesson from this analysis is that patent owners seeking success at the Federal Circuit should focus on winning at Step 1. Even with the addition of validity-preserving deferral as a possible Step 2 outcome, chances of success at that stage are extremely slim.

Many commentators, and even some Federal Circuit judges, have criticized the Alice two-step legal framework as ambiguous and unworkable. If these criticisms are right, it risks making which judges sit on a panel determinative of the outcome, rather than the merits of the patent claims at issue. Analyzing the judges’ written decisions and votes is a way to test whether this concern is legitimate.

Of those judges who have participated in at least 20 cases addressing Section 101 eligibility, Chief Judge Prost has sat for the most (39), followed closely by Judge Moore (36). 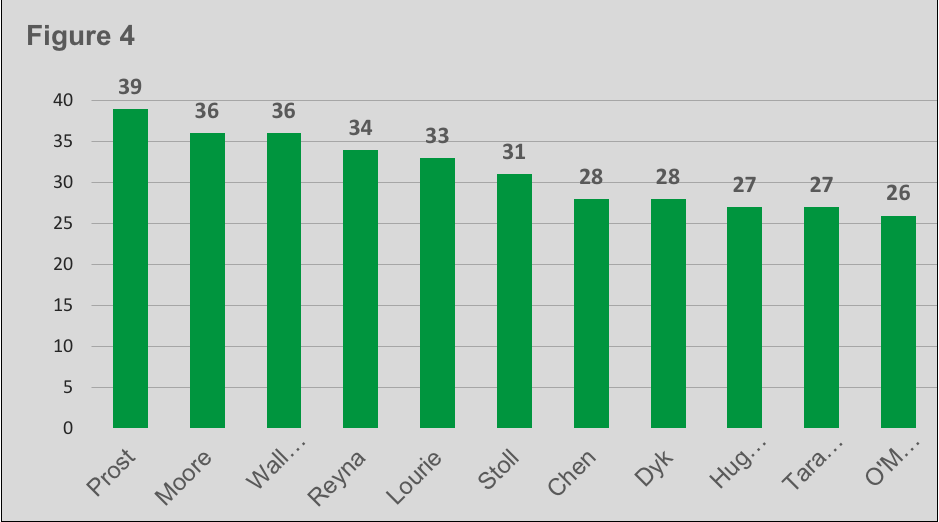 Which panel judge authors an opinion depends on the judge’s seniority and interest in writing on the issues in that case. The two judges who have issued the most decisions (of those issuing five or more) are Judges Moore (17) and Prost (15). Judge Moore authors the panel decision in 47.2% of her Section 101 cases, and Judge Chen is close behind at 42.9%. Judges Prost and Stoll also author opinions in these cases more frequently. 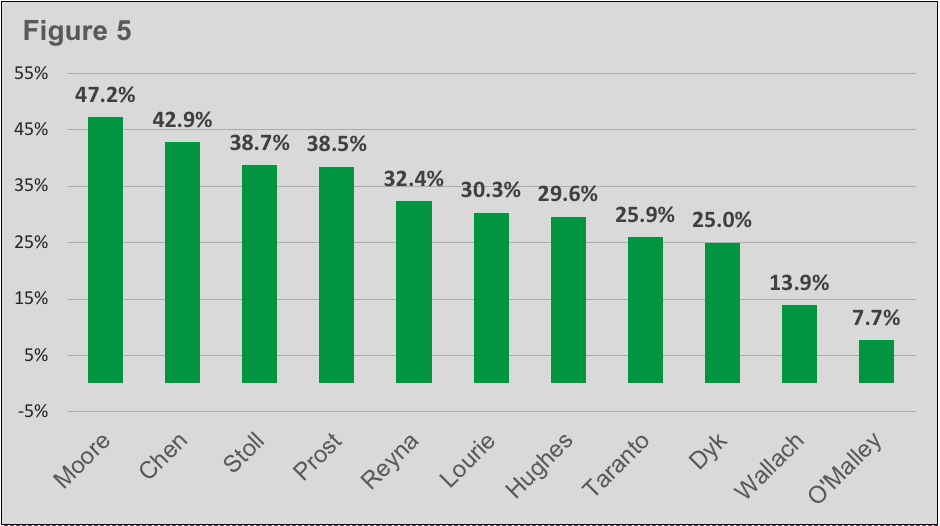 Because findings of Step 2 inventive concept are so rare that little distinguishes the judges, we limited our analysis of their individual voting rates to the issue of Step 1 patentable subject matter. 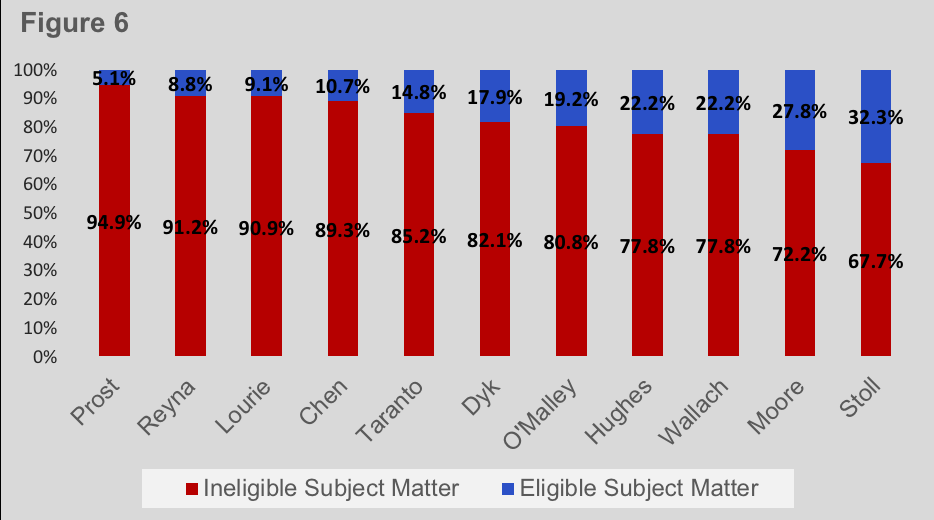 It is noteworthy that Chief Judge Prost, who has sat on the most Section 101 panels and issued the second most opinions, is also the most likely to find patent claims directed to ineligible subject matter. She finds just 1 in 20 patent claims directed to subject matter the USPTO should have considered for patentability. Judge Reyna is not far behind.

Judges Moore and Stoll serve as the Federal Circuit’s other pole. Of those two, Judge Moore appears to have the greater impact, having written the most opinions (17) on the Circuit. And those opinions result in Step 1 ineligibility at a lower rate (64.7%) than her voting (72.2%). Judge Stoll has votes for ineligibility less frequently (67.7%), and 50% of her 12 written opinions found the subject matter patent eligible.

Use the Data to Find Your Focus

The Federal Circuit is indeed a daunting Section 101 venue for patent owners. Those facing appeal need to concentrate on Step 1 of the Alice framework, as that is where almost all appeals are won or lost. And the reported data on voting patterns may help lawyers to focus on the judges who are most likely to be persuaded at oral argument.

Join IPWatchdog for Virtual CON2020 later today, beginning at 12:00PM, where Retired Federal Circuit Chief Judge Paul Michel and other panelists will address whether the Federal Circuit remains relevant considering its confusion around subject matter eligibility, among other topics. Register here to attend for free.

C. Graham Gerst Graham Gerst is a partner at Global IP Law Group, LLC. His experience encompasses complex transactions, litigation, and government (where he held the highest-level national security clearance). Many of the [...see more]

Paul Choi was a summer associate at the Global IP Law Group, LLC. He received his bachelor’s degrees in Biology and Economics at Cornell University and currently attends the George Washington University [...see more]