“A review of the disclosure and claims of the recently issued ‘819 patent and the now several years old ‘715 (Chargepoint) patent offer a valuable drafting lesson in this new age of eligibility uncertainty.” 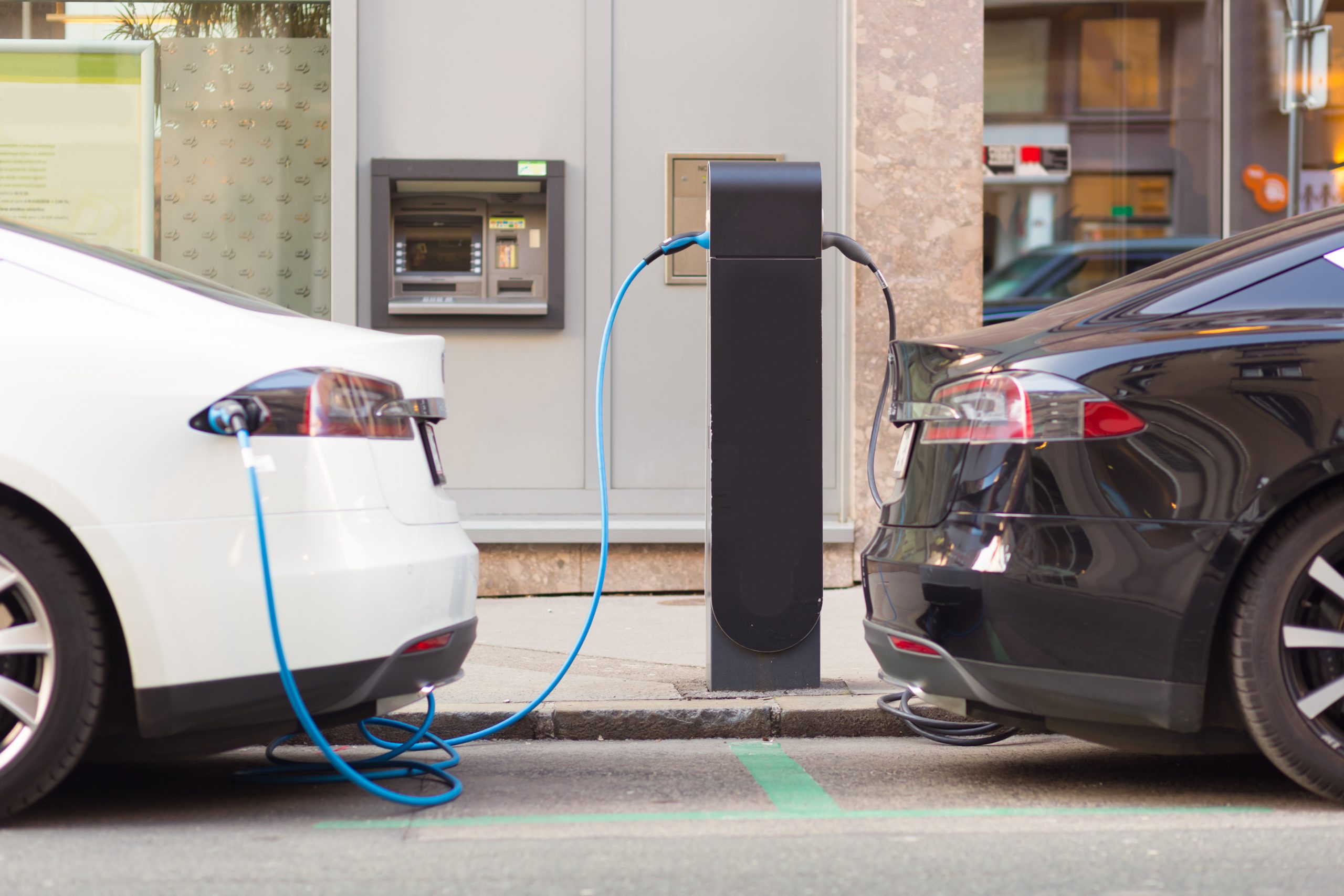 While perusing the Patent Gazette looking for interesting, recently issued patents to discuss during Intro to Patent Prosecution, I stumbled across U.S. Patent No. 10,668,819, titled Enhanced wireless charging. Issued on June 2, 2020, this patent was filed on May 22, 2017. The reason this particular patent caught my attention as I was looking for software patents and other high-tech patents and claims I could dissect for students was because the invention is to a wireless vehicle charging station. Those familiar with the Federal Circuit’s decision in ChargePoint, Inc. v. SemaConnect, Inc., 920 F.3d 759 (Fed. Cir. 2019), will recall that Chief Judge Prost (joined by Judge Chen) ruled that the claims directed to a wireless vehicle charging station of U.S. Patent No. 8,138,715, were abstract and patent ineligible.

It’s All in the Claim

In these types of cases one must be initially reminded of Judge Giles Sutherland Rich’s pithy truism: “[t]he name of the game is the claim.” Giles S. Rich, The Extent of the Protection and Interpretation of Claims-American Perspectives, 21 Int’l Rev. Indus. Prop. & Copyright L., 497, 499 (1990). Perhaps more accurately today, however— the name of the game is the disclosed invention as claimed.

A review of the disclosure and claims of the recently issued ‘819 patent and the now several years old ‘715 patent tell the whole story and offer a valuable drafting lesson in this new age of eligibility uncertainty.

According to the innovation embodied in the ‘819 patent, the claimed invention relates to a vehicle charging station where an electric vehicle is parked in a parking spot configured to receive power from a power grid. There are first and second hollowed out components, which, when aligned, signal that the electric vehicle is in position for the charge to begin. A request is sent to the power grid, received, and then in response to the request, confirmation that the first and second hollowed out components are aligned is made. There is a conversion of the power to a radio medium having a specific frequency of 500 megahertz, with the radio medium with said frequency being transmitted to the electric vehicle for charging.

Below is Claim 1 of the recently issued ‘819 patent, with concrete limitations in yellow and action in blue. 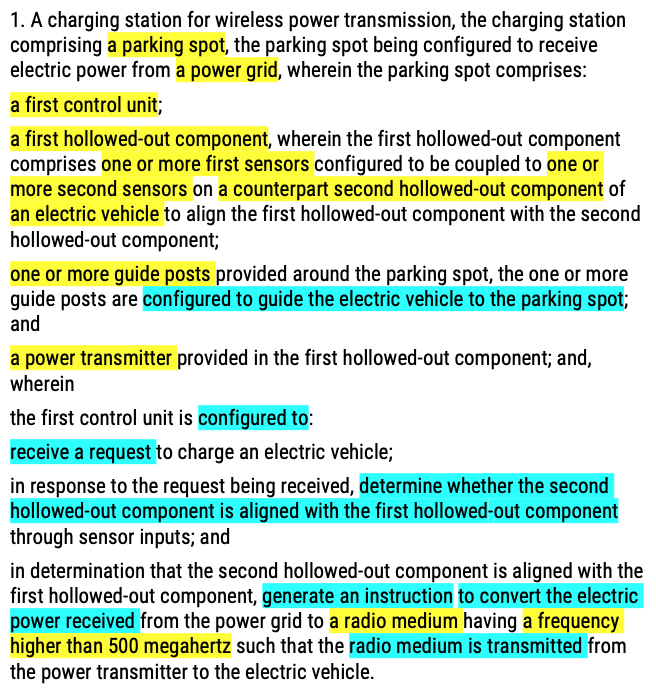 Now compare and contrast this with claims 1 and 2 of the ‘715 patent at issue in ChargePoint: the only two patent claims addressed by the Federal Circuit decision because they were the only two patent claims asserted. In claim 1, the claimed invention is directed to an apparatus with a control device enabled to charge electric vehicles, a transceiver to communicate with a remote service via a wide area network for the purpose of turning the electric supply on. Claim 2 is directed to the same apparatus with an electric coupler that is somehow associated with a control device that supplies an on and off switch. Claim 1 and 2 of the ‘715 patent respectively read, with purple highlight showing the preamble, yellow the concrete limitations, and blue the action: 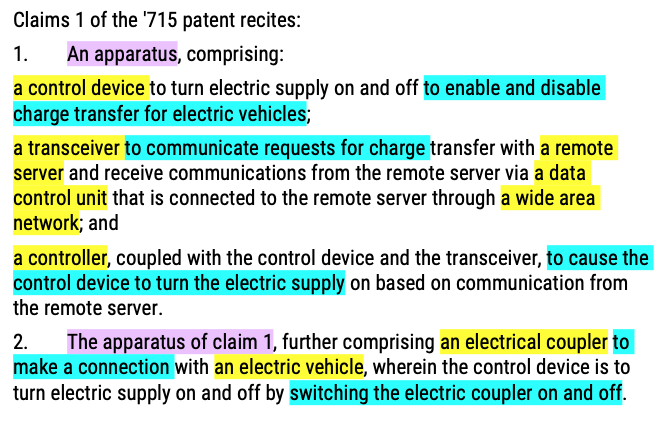 While the claims of the ‘819 patent are clearly of a more modern vintage than those of the ‘715 patent, let’s begin with what Chief Judge Prost wrote in ChargePoint, saying that it is clear that the claims are both patent ineligible. That is simultaneously both incorrect and correct. It is incorrect under any fair reading of 35 U.S.C. 101, including the admonitions from the Supreme Court, to guard against 101 swallowing all of patent law, and the strict prohibitions in Diamond v. Diehr — which we are continually told are still good law — about not allowing the rest of the statute to do the work for which it is designed. It is, however, sadly a correct statement given the bastardization of patent eligibility by a Federal Circuit that seems afraid to allow 102, 103, or in this case 112, to do the work for which they were designed. Everything must be patent ineligible if there is at all any reason for coming to the conclusion that the claim is abstract without the addition of significantly more, which means significantly different things to different jurists.

But this is the world we live in, a world where Alice has fallen through the looking glass and she can’t get up! So, what are we to do? Learn.

First, the real problem facing the ‘715 patent is that it was filed on March 1, 2011, which means it was prepared, filed and sitting at the Patent Office awaiting prosecution for more than 53 weeks before there even was a Mayo framework, let alone an Alice-Mayo framework, which wouldn’t become a reality until June 2014.

The second major problem facing the ‘715 patent is that it was written at a time just after the Supreme Court said— presumably now in jest— that business methods were still patent eligible. The understanding after Bilski v. Kappos, which will soon celebrate its 10th anniversary on June 28, was that methods describing a process that in part would have money changing hands would not as a matter of law suddenly become patent ineligible. Fast forward to 2020, ten years later, and anyone even vaguely familiar with Federal Circuit decisions involving payment gateways or anything at all financial-related know that even hinting at payment, money, invoices, credit cards or the like is the absolute kiss of death. See e.g. Smart Systems v. Chicago Transit, 873 F. 3d 1364 (Fed. Cir. 2017); Credit Acceptance. v. Westlake Serv., 859 F.3d 1044 (Fed. Cir. 2017).

The claims of the ‘715 patent, which by 2020 standards are quite sparse, did not mention payment, but the specification did violate what has become this absolute rule that must never be violated. The patent reads in part:

Obviously, the Federal Circuit knew what the ‘715 patent was all about—it was a a dirty, rotten, filthy, business method.

What, if anything, could have been done in hindsight to save the claims of the ‘715 patent? It is unclear, and perhaps unlikely, that there would be anything that could be done by 2020 standards. There is little support from a 112 standpoint, at least based on our understanding as has developed in the Alice/Mayo era. But if the Federal Circuit would not be swayed by disclosure of payment sources and collecting payment disclosed in the specification, here is what could have been attempted.

The Devil is in the (Technical) Details

What follows is a hypothetical re-writing of claim 1 of the ‘715 patent, attempting to stay as true as possible to the specification of the ‘715 patent. In this image, purple represents the preamble, yellow highlight is the concrete limitations, the red is what I’ve removed, and the green is what I propose to add to the claim. 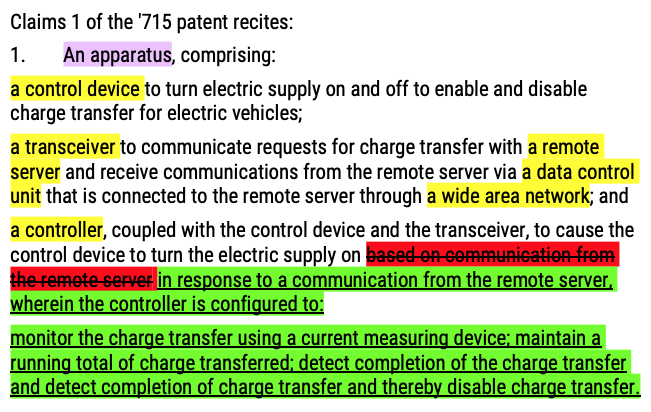 Would this be enough? In a fair world, it would be enough to overcome 101, but this is not a fair world. Regardless, the patent would still likely have issues under 112 because how the monitoring of the charge transfer is accomplished is not described in any real technical detail. Neither is how the detection of a complete transfer is made, for example.