“It appears that dbrand is lightly acknowledging the potentially infringing nature of its design but is willing to take the risk of putting the product on the market anyway.”

Is imitation really the highest form of flattery? Nintendo might not think so after seeing dbrand’s latest Switch skin set.

The Nintendo Switch has become extremely popular amidst social distancing, work from home, and stay at home requirements during the COVID-19 pandemic. The console’s combination of handheld and traditional features, along with its wide variety of games, appeals to a large audience and provides an engaging way to spend time at home.

Unfortunately, the large demand, coupled with supply issues, has made it difficult for consumers to find a console to purchase. Switch consoles, which normally retail for $299, are either sold out or selling at high markups, often in the $500-600 range. This difficulty is intensified for limited edition versions of the console, like the latest Animal Crossing New Horizons special edition. This special edition Switch features pastel green and blue Joy-Con controllers (each with a cream back) and a unique cream dock adorned with Animal Crossing-themed art. What makes this dock even more special is that other limited-edition docks have featured textured art on black docks rather than docks fully customized with the edition’s art.

So, what’s a video game (or Animal Crossing) enthusiast to do when they can’t get their hands on this special edition console? Customize their own, of course! Players have been customizing their consoles for years, whether with stickers, skins, fun cases, or hand-painted art.

dbrand is a company that sells skins – adhesive layers that wrap around items to change their color – for phones, consoles, and other electronics. dbrand has been a proponent of ensuring its customers get the best quality and best service – it even took a firm stance against putting skins on the Switch until it developed a unique adhesive that didn’t damage the console’s finish once the skin was removed.

But, this time dbrand finds itself in a self-proclaimed gray area: it’s designed a set of Switch skins to mimic the official Animal Crossing special edition console. “Take a close look at the design on the face of this Switch dock,” says Dbrand on its site. “Is it copyright infringement? Lawyers we paid to say ‘no’ said ‘no.’ Lawyers not on our payroll disagree. That’s the exact gray area we’re counting on to get loads of free lawsuit-related press.”

So, what are the legal implications of such a move?

There are a few things to consider when looking at dbrand’s (not) Animal Crossing Switch skins. The first is the colors of the Joy-Con controllers: dbrand includes pastel green and blue skins to mimic the colors Nintendo used in its special edition. Unlike the special edition, the dbrand skins don’t have a cream back; rather, the pastel color wraps entirely around the controller. This isn’t an issue for the retailer, as unless Nintendo can demonstrate that the pastel green and blue colors have become intertwined with its business enough to become a trademark, the video game company doesn’t “own” the color combination.

The real issue lies with the dock skin. Below are pictures of the official Nintendo dock and the dbrand skin. Would you say they’re similar? Entirely different? 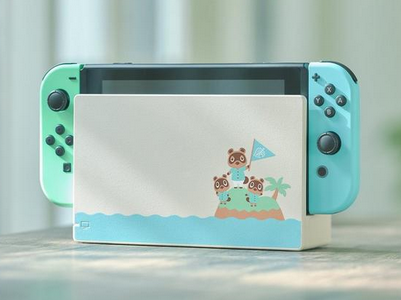 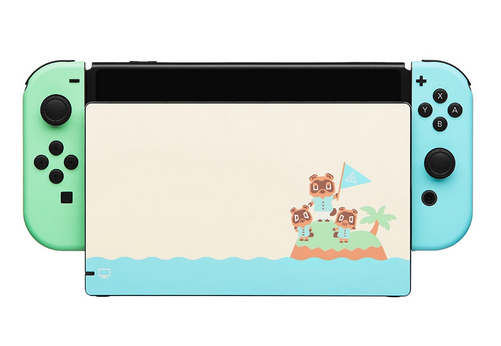 You can see some differences in the characters’ faces and the flag design. But, unlike with the Joy-Con color combination, dbrand is arguable copying Nintendo’s art, which is protected under copyright law. dbrand makes sure to call its version a parody (effectively a buzzword for fair use, which is permissible limited use of another’s copyrighted material without their authorization), but it’s questionable whether dbrand’s art really is parody or plain tongue-in-cheek copyright infringement. As dbrand further states on its website:

“Oh – and even if that legal battle with Nintendo never comes to pass, you’ll still have a near-perfect parody of the most popular limited edition Switch on the market. (not) Animal Crossing: It’s like Animal Crossing, but (not).”

It appears that dbrand is lightly acknowledging the potentially infringing nature of its design but is willing to take the risk of putting the product on the market anyway.

Additionally, dbrand may be infringing Nintendo’s trademark. This is the case if consumers believe this is an official product or can’t tell the difference between the official special edition Switch and these unofficial skins. If you look closely, you’ll notice that the dbrand skin characters are different from the official version – but are these changes enough to differentiate the two products in the eyes of consumers and the eyes of the law?

Any legal action over these skins would take place between dbrand and Nintendo, although it’s up to you to decide whether you are ethically comfortable with purchasing this dbrand product. In all likelihood, dbrand will either run out of its (not) infringing skins or Nintendo will send them a cease and desist order, likely requesting licensing fees or other financial benefits. dbrand is toeing the line between legitimate use and copyright infringement to gain press and short-term profits, taking the risk of seeing whether Nintendo will pursue legal action.

What do you think? Is dbrand taking advantage of Nintendo designs or are their skins harmless?