“In concluding that the same or substantially the same art was previously presented during prosecution and that the petitioner did not show that the examiner erred in considering the arguments, the PTAB exercised its discretion to deny institution of IPR.” 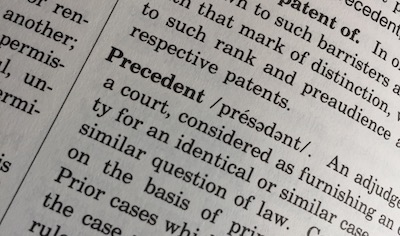 Yesterday, the USPTO Patent Trial and Appeal Board (PTAB) designated two opinions as precedential. In one case, Advanced Bionics, LLC v. MED-EL Elektromedizinische Geräte GmbH, from February 13, 2020, the Board exercised its discretion to deny institution of inter partes review (IPR)under 35 U.S.C. § 325(d). In the other, Oticon Medical AB v. Cochlear Limited, entered on October 16, 2019, the Board concluded that the Petitioner demonstrated a reasonable likelihood of prevailing on its assertion that the claims in question were unpatentable and, thus, instituted IPR .

In concluding that the same or substantially the same art was previously presented during prosecution and that the petitioner did not show that the examiner erred in considering the arguments, the Board exercised its discretion to deny institution of IPR under 35 U.S.C. § 325(d).

In Oticon Medical, the subject patent, U.S. Patent No. 9,838,807 (the ‘807 patent), was directed to “hearing devices and, more particularly, to anchoring elements for bone anchored hearing devices.” An illustrative claim recites: “An anchoring fixture for anchoring a prosthesis to a skull bone.” In construing the claim terms, as requested by the Petitioner, the Board applied the Phillips standard, wherein the words of a claim are generally given their “ordinary and customary meaning.”

The Board addressed several claim terms, including the preamble, “circumferential groove”, and “means for exerting a compression onto the skull bone in a radial direction to stabilize the fixture in the skull bone”.

The Board next addressed the patent owner’s arguments that the Board should deny institution of IPR because the petition was based on substantially the same prior art and arguments already considered by the Office during prosecution of the ’807 patent or its parent application. In particular, the patent owner argued that one prior art reference not cited during prosecution, Choi, was cumulative over Härle, which was considered during prosecution. The Board analyzed two prior art references in view of the Becton Dickinson factors and found that the references were not cumulative because the “circumferential grooves” disclosed in each were different structures that served different purposes. The Board noted “[i]n addition to providing different structure and function, Choi also provides an advantage, i.e., dispersing stress on the cortical bone, which Petitioner relies on to provide motivation to a person of ordinary skill in the art to add Choi’s grooves to the fixture of [an additional reference] Westerkull.”   The Board further noted that “there was error in the prosecution leading to the issuance of the ’807 patent because Choi, with its teaching of circumferential grooves, was not considered.”  Thus, since there was noncumulative prior art asserted in the petition, e.g., Choi, the Board did not exercise its discretion under § 325(d) to deny the petition.

The Board also addressed the patent owner’s argument that the Board should deny institution under 35 U.S.C. § 314(a) because the petitioner waited a year to file the petition after instituting a suit in a district court. The patent owner said that the petitioner “benefited from Patent Owner’s responses to Petitioner’s invalidity arguments and contentions and used them as a roadmap for the Petition by adding Choi to counteract a weakness in its District Court invalidity contentions.” Reasoning that a PTAB proceeding would not be directly duplicative of the district court action, and that a trial date had not been set by the district court, the Board declined to exercise its discretion under § 314(a).

The Board considered the petitioner’s assertion that several claims of the ‘807 patent were unpatentable as obvious over Westerkull and Choi, and other prior art references. The Board addressed each of the claims asserted by the petitioner in view of the cited references and concluded that the petitioner demonstrated a reasonable likelihood of prevailing on its assertion that the claims were unpatentable. Therefore, the Board ordered that an IPR of the asserted claims of the ’807 patent be instituted with respect to all grounds set forth in the petition.