“Because the inverse ratio rule, which is not part of the copyright statute, defies logic, and creates uncertainty for the courts and the parties, we take this opportunity to abrogate the rule in the Ninth Circuit and overrule our prior cases to the contrary.” – Ninth Circuit en banc opinion The en banc U.S. Court of Appeals for the Ninth Circuit has ultimately sided with Led Zeppelin in a long-running case examining whether the opening notes of the band’s legendary song “Stairway to Heaven” infringed the song “Taurus,” written by Robert Wolfe of the band Spirit, a contemporary of Led Zeppelin. Michael Skidmore, Trustee for Wolfe’s estate, brought the original suit in 2014.

The Court notably struck down its own “inverse ratio rule,” which dictates that there is “a lower standard of proof of substantial similarity when a high degree of access is shown,” as set out in the 2000 case of Three Boys Music Corp. v. Bolton.

In September 2018, a three-judge panel of the Ninth Circuit vacated-in-part the judgment of the U.S. District Court for the Central District of California that “Stairway to Heaven” was not substantially similar to “Taurus”. The case was remanded back to the district court after the appellate court found that certain instructions given by the district court to the jury were erroneous and prejudicial. However, the Court agreed to rehear the case en banc in June 2019.

In its ruling today, the en banc Court explained that “the majority of those that have considered the [inverse ratio] rule declined to adopt it. The Second, Fifth, Seventh, and Eleventh Circuits have rejected the rule.” Furthermore, even within the Ninth Circuit, the rule, which was first articulated in 1977, has had “checkered application,” said the Court. It continued:

Because the inverse ratio rule, which is not part of the copyright statute, defies logic, and creates uncertainty for the courts and the parties, we take this opportunity to abrogate the rule in the Ninth Circuit and overrule our prior cases to the contrary….

To the extent ‘access’ still has meaning, the inverse ratio rule unfairly advantages those whose work is most accessible by lowering the standard of proof for similarity. Thus the rule benefits those with highly popular works, like The Office, which are also highly accessible. But nothing in copyright law suggests that a work deserves stronger legal protection simply because it is more popular or owned by better-funded rights holders.

The rule also “improperly dictates how the jury should reach its decision,” said the majority. “The burden of proof in a civil case is preponderance of the evidence. Yet this judge-made rule could fittingly be called the “inverse burden rule.”

As a result of the en banc court’s decision to abrogate this rule, the district court did not err in failing to include an jury instruction articulating this rule.

In its first opinion in the case, the Ninth Circuit said that the district court’s failure to instruct the jury on the protectability of combinations of otherwise unprotectable elements was especially problematic because an expert witness for the plaintiff testified that a combination of five elements, some of which were in the public domain, were the basis for the substantial similarity between the Led Zeppelin and Spirit songs. The Ninth Circuit found that the failure to provide these instructions to the jury was prejudicial because the substance of the applicable law wasn’t fairly and correctly covered, thus necessitating reversal.

The Court also determined in its original opinion that the district court erred in its formulation of the jury instructions regarding originality in two aspects. First, one of the jury instructions included language that common musical elements such as descending chromatic scales, arpeggios or short sequences of three notes aren’t protectable by copyright. “This error was not harmless as it undercut testimony by Skidmore’s expert that Led Zeppelin copied a chromatic scale that had been used in an original manner,” the Ninth Circuit’s opinion said.

Secondly, a different jury instruction omitted parts of the test for originality and added misleading language. The district court had omitted an instruction requested by Skidmore which would have acknowledged the fact that the original part of a work doesn’t need to be new or novel so long as it isn’t copied. Not only did the district court omit that part of the instruction but it also included language regarding elements of prior works or the public domain not being copyrightable. “While this statement is not literally incorrect, it misleadingly suggests that public domain elements such as basic musical structures are not copyrightable even when they are arranged or modified in a creative, original way,” the three-judge panel wrote.

However, in today’s ruling the en banc Court said that “reviewing the jury instructions as a whole, we conclude that the originality instructions were sound and were not prejudicial to Skidmore.” Even Skidmore’s own expert agreed that “musical concepts like the minor chromatic line and the associated chords have been ‘used in music for quite a long time’ as ‘building blocks,’” wrote the full Court, pointing to its own past precedent supporting that “taking six seconds of the plaintiff’s four-and-a-half-minute sound recording—spanning three notes—is de minimis, inactionable copying.”

Finally, on the topic of whether the 1909 Copyright Act limited the scope of copyright protection to deposit copies, the Court said it did. The document deposited for copyright protection in 1967 for the song “Taurus” consisted of a single page of sheet music, but Skidmore argued that the copyright should extend beyond that and that the deposit was simply archival in nature. The Court disagreed.

“Because the deposit copy defines the four corners of the Taurus copyright, it was not error for the district court to decline Skidmore’s request to play the sound recordings of the Taurus performance that contain further embellishments or to admit the recordings on the issue of substantial similarity,” said the Court.

The decision means that a new district court trial won’t take place, as the Ninth Circuit originally ordered, but the case could very well head to the Supreme court.

Many in the IP community seemed initially pleased with the decision. 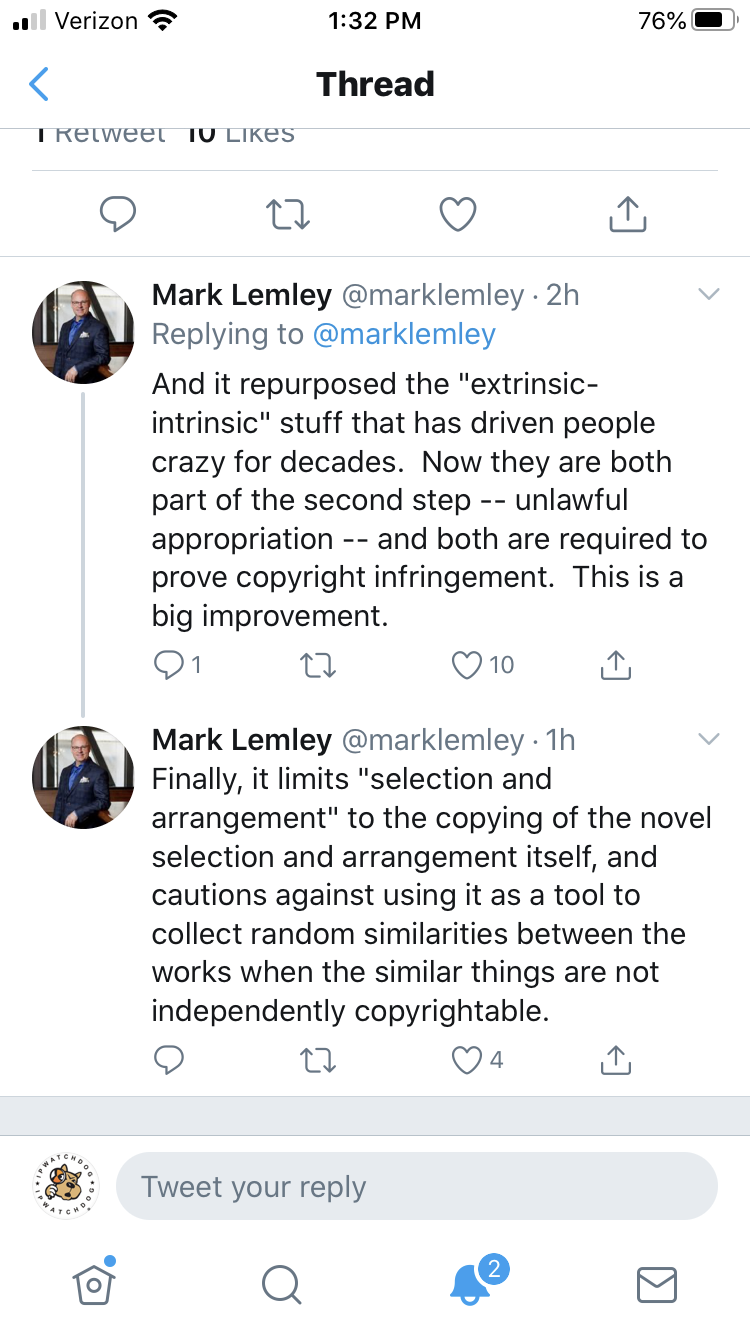