A Look at the Inventor Rights Act: Restoring Injunctive Relief and Immunizing Inventors Against the PTAB

“We think that there are members who are open-minded to this, although there’s probably a lot of work left to be done before it’s going to become law… It seems clear that there’s an impetus to do something about these issues and we’ll be looking at how to shape the bill to give it the very best chance at passing into law.” – Spokesperson for Congressman Davis 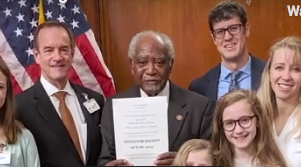 In mid-December 2019, Congressmen Danny Davis (D-IL) and Paul Gosar (R-AZ) introduced the Inventor Rights Act of 2019 into the House of Representatives. If passed, the bill would do much to reestablish strong patent protection rights for inventors who own their own patents, giving them an opportunity to opt out of validity trials at the Patent Trial and Appeal Board (PTAB) while also undoing many of the harmful effects of U.S. Supreme Court decisions such as TC Heartland and eBay.

A Potential Win for Individual Inventors

While the Inventor Rights Act is directed at a subset of patent owners feeling the brunt of changes to the patent system wrought by Congress and the federal judiciary over more than a decade, the bill does go a long way in correcting the situation for those individual inventors who are likely to have the fewest resources to enforce their patent rights. Anyone who has despaired at the response of D.C. lawmakers to the decline of the U.S. patent system will likely be encouraged by the bill’s acknowledgment that the promises of the Constitution’s Intellectual Property Clause are “no longer attainable” for inventors. After years of patent troll rhetoric wrecking the U.S. patent system, it’s refreshing to see a piece of legislation reference both the legal struggles of legitimate inventors as well as the “efficient infringement” business model “whereby large corporations infringe patent rights held by inventors without concern for any legal consequences.”

Any inventor-owned patents would become subject to inventor protections that would be outlined by new Section 330, which the bill would add to the Patent Act. The first part of this new section would insulate inventor-owned patents from some of the more deleterious effects of the America Invents Act of 2011 by preventing the U.S. Patent and Trademark Office to hold validity trials on such patents, including reexaminations, without the consent of the patentee to engage in such trials.

Undoing the Harmful Effects of TC Heartland and eBay

The bill would also directly address issues that individual inventors and small entities have faced in enforcing their patents in district court which stem from the Supreme Court’s TC Heartland LLC v. Kraft Foods Group Brands LLC decision in 2017. New Section 330 would also include a choice of venue clause that allows infringement and declaratory actions involving inventor-owned patents to be brought in a judicial district in accordance with 28 U.S.C. § 1400(b), where the defendant has consented to be sued, where the inventor conducted research and development on the patent, or in accordance with 28 U.S.C. § 1391(c)(3) in the case of a foreign defendant that doesn’t meet the requirements of Section 1400(b). The choice of venue clause also gives the inventor the ability to bring a suit in a district where a party has both operated a regular and established physical facility for purposes other than creating venue and one of the following: engaged in R&D prior to the patent’s effective filing date; manufactured a tangible good that embodies an invention; or implemented a manufacturing process that embodies an invention.

Another clause in the Inventor Rights Act seeks to restore the presumption in favor of awarding injunctive relief to inventors proving infringement, a remedy that was in large part eradicated by the Supreme Court’s 2006 decision in eBay v. MercExchange, L.L.C. This section of new Section 330 would order a court, upon a finding that an inventor-owned patent is infringed and neither invalid or unenforceable, to presume that further infringement would cause irreparable injury and that available remedies at law would be inadequate to remedy that injury. The bill allows an infringing party to overcome this presumption if that party shows clear and convincing evidence that further infringement wouldn’t irreparably harm the patentee. Such evidence could include unreasonable delay in bringing an infringement suit after the patentee discovered or reasonably could have known about the infringement.

Finally, the Inventor Rights Act also includes strong provisions on damages recovery for inventors proving infringement of their patents, including a fee-shifting provision that seems designed to encourage individual inventors to seek the vindication of their patent rights in court despite lacking financial resources for obtaining legal representation. If a court finds that an inventor-owned patent has been infringed under various subsections of 35 U.S.C. § 271, including direct, induced, contributory or overseas infringement, the court shall award to the inventor both the infringer’s revenues from the infringement, minus any costs or deductions proven by the infringer, as well as costs under 28 U.S.C. § 1920. Upon a finding of willful infringement, the court may also award damages up to three times the amount of the profits award. If the inventor’s attorneys fees exceed 10 percent of the profits and damages award entered by the court, then the court shall award attorneys fees to the inventor so that those fees won’t exceed 10 percent of the damages award.

Support from Inventor Groups and Feedback From Capitol Hill

Understandably, this bill has been receiving support from those who understand the challenges faced by individual inventors in the current incarnation of the U.S. patent system. Randy Landreneau, President of US Inventor, offered the following comments on the Inventor Rights Act:

Recent legislation and court decisions have rendered American inventors defenseless against corporations intent on taking patented inventions. This has destroyed the incentive to invent that made America the world leader in innovation for 200 years. The future of American innovation depends on the restoration of inventors’ rights as granted in the U.S. Constitution, and that is the purpose of The Inventor Rights Act, H.R. 5478. Our effort now is to get enough support in the House to cause the Committee to take it up. Readers who want this bill to succeed should ask their U.S. Representatives to become co-sponsors.

IPWatchdog also received comments from a spokesperson in the office of Congressman Davis who informed us that the Inventor Rights Act has been accepted by the House Intellectual Property Subcommittee. It’s not likely that the bill will move towards a vote this year due to the election cycle, but Congressman Davis is very likely to reintroduce the bill next year. While changes in the reintroduced bill may well result from suggestions and comments coming from a variety of sources, the spokesperson indicated that there has been positive feedback on the bill, including from an unidentified member of the House of Representatives who indicated an interest in co-sponsoring the bill at a town hall event. “We think that there are members who are open-minded to this, although there’s probably a lot of work left to be done before it’s going to become law,” the spokesperson said. Although Congressman Davis’ office has an idea about which provisions of the bill will be most controversial, it’s currently too early to determine how to resolve those issues.

“We want to see where the inventor community and members of Congress come down on this bill,” the spokesperson said. “It seems clear that there’s an impetus to do something about these issues and we’ll be looking at how to shape the bill to give it the very best chance at passing into law.”